Eberbach Monastery (Kloster Eberbach) is a former Cistercian monastery near Eltville in the Rheingau Valley of Hesse, Germany (famous for its Riesling wine). In addition to being a world heritage site, the monastery provided the interior scenes for the 1980s film, The Name of the Rose. It is also the site of the Rheingau Musik Festival, and is still an active wine production center. 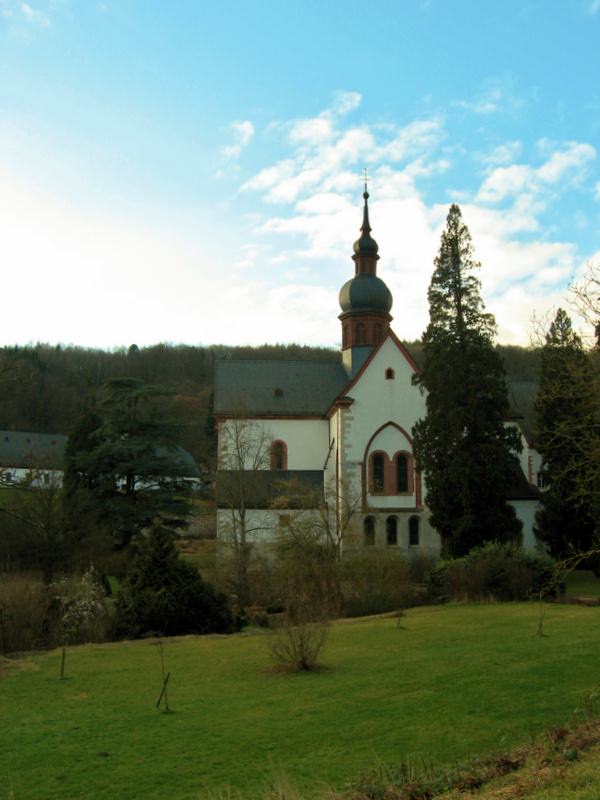 The monastery was founded in 1136 by Bernard of Clairvaux. He and the original French monks wisely imported grapes from Pinot; thus establishing one of the most economically successful and powerful monasteries in medieval Germany. The monks dominated the wine trade in the region and extended their reach to form satellite wine-producing monasteries near Heidelberg, Liege, Wetterau, and other areas. In the fifteenth century an estimated 200 monks and 600 lay brothers lived in the monastery. 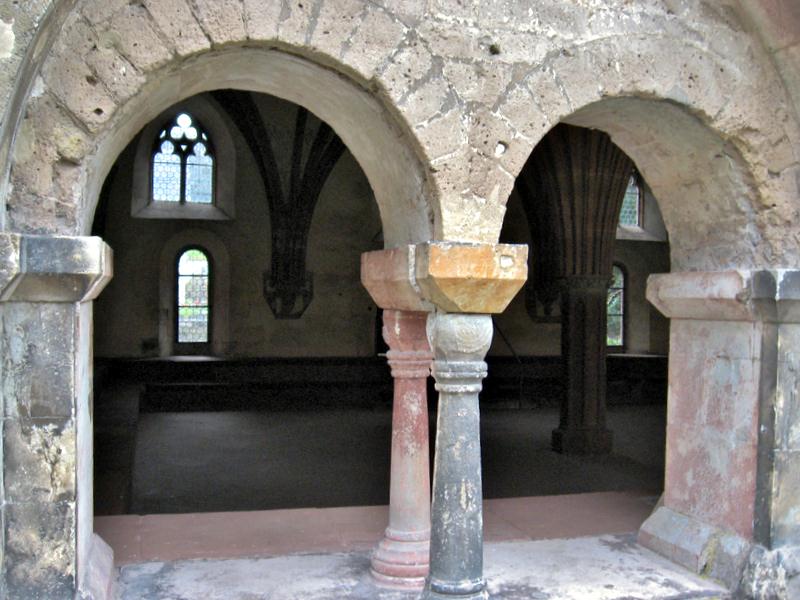 Tours of the monastery are self-directed and audio devices are available in multiple languages, which provides visitors with an extended history of each room in the site. The tour begins in the arched cloisters, which lead to the wine press room, wine cellars, museum, and chapter house. In the cloister walkway there is an open grave, which once contained the bodies of the first three abbots:  Ruthard, Eberhard, and Erhard. The grave was looted in the nineteenth century and the bodies were never recovered. 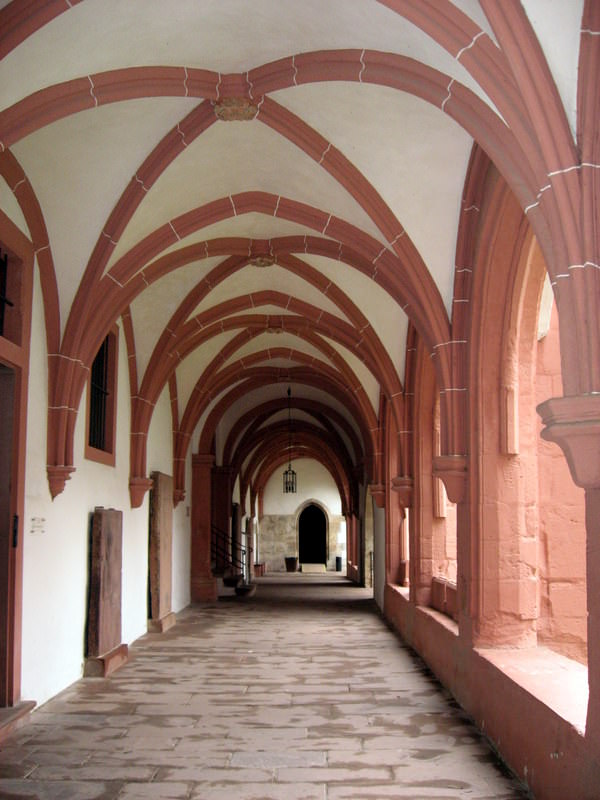 Heavy medieval wine presses sit in rows in a large room off of the main cloisters. The room is damp and musty from the humidity involved in centuries of wine-making and black mold covers large stretches of the walls and ceiling of this vast room. The presses are silent today and the only sound in the room is the slight echoing of footsteps, but at the height of the wine-producing days the presses must have caused an enormous amount of noise. Also off of the cloisters is the Fraternei, a dark, vaulted room, which has been used as a wine cellar (Cabinetkeller) since medieval times. Numerous historic wine barrels are on display in the wine cellar; and sometimes wine-tasting tours are available. This room has also suffered the effects of humidity and dampness through the ages and the choking smell of mold might send you running back into the sunny cloisters.

The monastery enjoyed great success through the middle ages, but was heavily damaged by looting and theft in the German Peasants’ War (1525) and the Thirty Years’ War (1631), which effectively was the beginning of the end for monastic life in the area. With the introduction of Secularization (Reichsdeputationshauptschluss) in 1803, monastic life ended for good at Eberbach. However, the wine-growing tradition continued through the patronage of several prestigious owners and it thrives to this day. In 2008, the Steinbergkeller was opened, which encompasses the first vineyards in Eberbach. In fact, the Eberbach estate is the largest wine-growing company in Germany (Hessische Staatsweingüter GmbH Kloster Eberbach ) with 200 cultivated hectares, which produce Riesling, Chardonnay , and a variety of Pinot. The wines from the estate can be sampled and purchased from the monastery gift shop or through one of the many wine tasting tours. 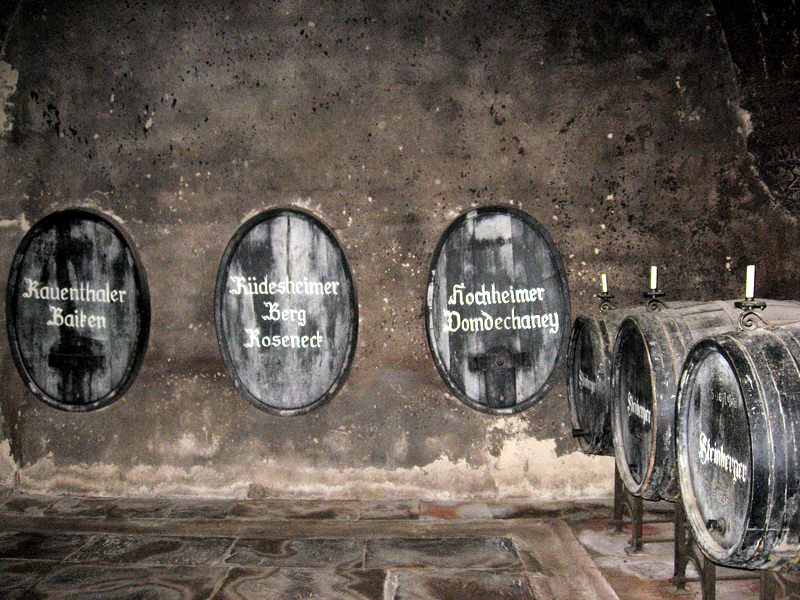 Apart from the business of wine-making, monastic life was first and foremost about prayer and separation from the world. The monks kept to a rigid schedule of prayer and work (ora et labora), rising around 3am to begin their morning prayers and then alternating between prayer and work throughout the day. The monastery church provides a visual illustration of the stark, unadorned life led by the monks of Eberbach. The stained glass lets in a little light and color, but overall the church is formidably serious and unornamented. The church contains the tombs of several members of the Katzenelnbogen family – powerful medieval counts who were instrumental in establishing the Riesling vintage in Eberbach. 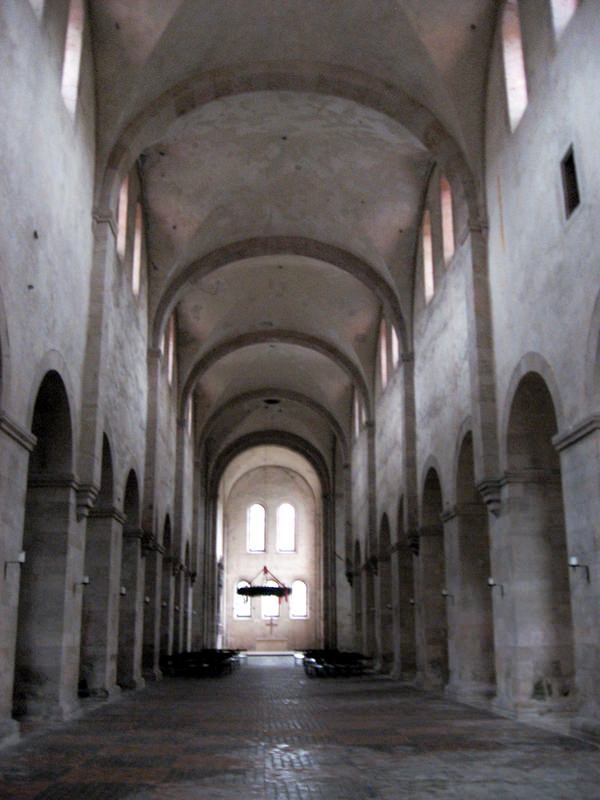 From the church, the dormitorium of the monks can be accessed via a stone stairway. At one time this cold, stone dormitory housed around 200 monks. Despite the beauty of the arched ceiling and the views from the windows of the monastery, the dormitory must have been a miserable place to sleep in the winter. The monastery is not heated and there is no evidence of fireplaces from previous centuries. I visited in January and even sitting for a few minutes on the freezing stone floor was like falling into an icy lake. Medieval monastic practices believed that suffering produced glory and these monks certainly suffered during the long German winters.

Outside of the monastery are a few outlying buildings, including a hospital and 19th century wine cellars. There is a small brook that runs through the grounds, which enhances the beauty of the gardens, and vineyards, especially in the warmer months. Not far from the monastery is the Rhine River and several charming rural villages, which are perfect for a long walk or evening meal to end your tour of the Rheingau. 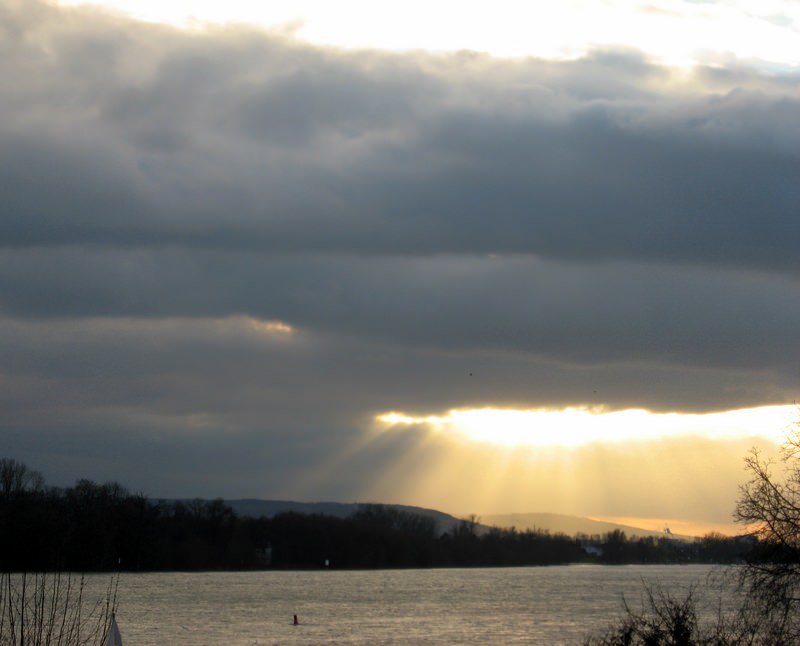 Rhine River near the monastery