It was an invitation to attend a royal wedding that caught my eye — a re-enactment of the marriage of Katherine Parr to Henry VIII, at Hampton Court Palace. How could I resist? And just to keep it all authentic, I opted to take the Thames cruise from the London docks up the Thames River to Hampton Court, just as Henry would have done. 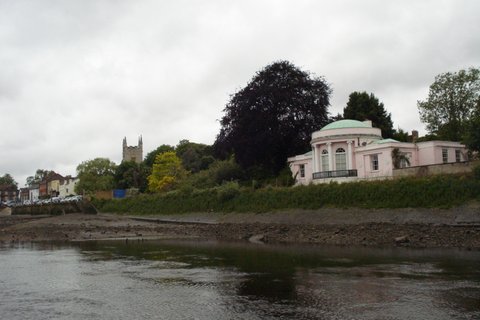 The river boat leaves from the Westminster pier, near Big Ben. It follows the same route taken by the Royal Barge 500 years ago when Henry VIII would journey to his famous palace. It’s a scenic and leisurely cruise, a time to relax away from the bustle of London. When we reached the locks at Richmond, there was a delay while the water-levels were adjusted to enable the boat to pass. 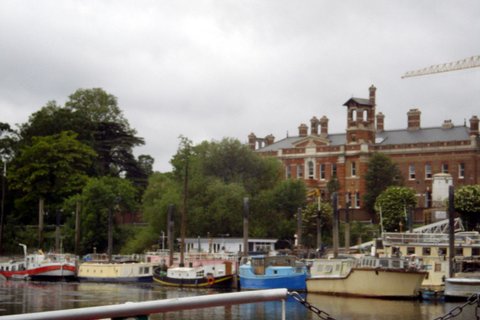 Because of the river tides that day, the usual 3 ½ hour journey had taken much longer than expected. So by the time I arrived at the massive gates of Hampton Court Palace, I’d unfortunately missed the wedding nuptials. But perhaps Henry and his bride were somewhere in the palace, so I decided to go looking for them.

Hampton Court Palace has been occupied by the British royals since the 18th century; and it’s now open to the public as a major tourist attraction, cared for by the Historic Royal Palaces Charity. It is one of the only two surviving palaces once owned by the flamboyant King Henry VIII. 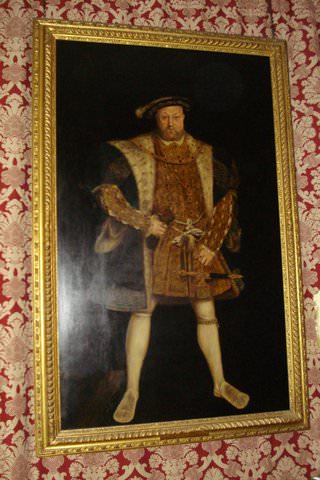 The palace is set in sixty acres of gardens. It was originally built for Cardinal Thomas Wolsey, a close friend of Henry, but he fell from favor in 1529 and the palace was passed on to the king. Henry immediately set about enlarging it. His court consisted of over 1,000 people and he wanted to make the palace large enough to hold the entire assembled court. 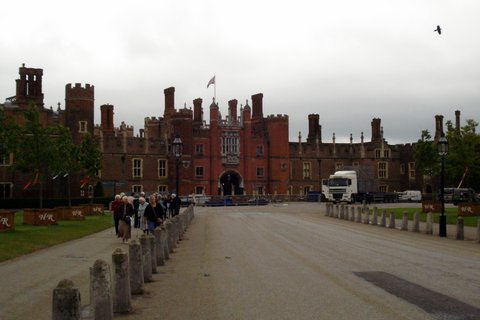 One of the first things he built was the massive kitchen where food was prepared for the court. I thought surely I’d find him there, but there were only kitchen staff busy preparing a feast for wedding guests, so I wandered elsewhere looking for the elusive royal couple. 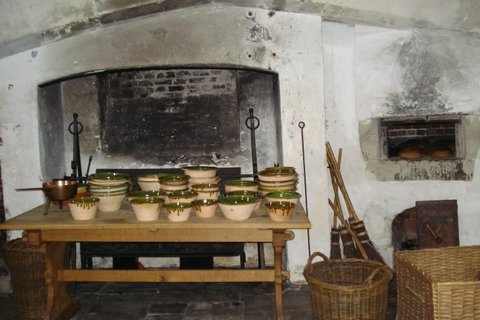 I checked the massive bed-chambers with their velvet-draped beds and stopped to admire the many pieces of art and furnishings that date from early Tudor to the late Stuart and Early Georgian periods. Many of them were brought to Hampton Court after William III continued a massive expansion, intending to make Hampton a rival of the Palace of Versailles in France. The work was halted in 1694, leaving the palace with two distinctive architectural styles: Tudor and Baroque. 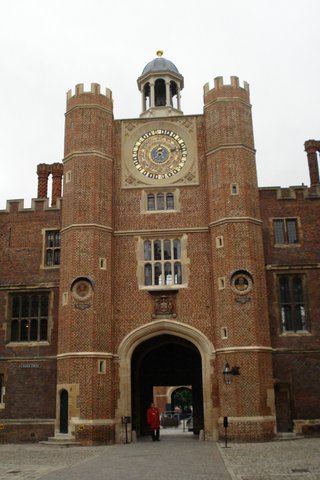 The gatehouse in the inner court, known as Anne Boleyn’s Gate, was intended to house her apartments; but Anne, Henry’s second wife, was executed before their completion. During the Tudor period the palace was the scene of many dramatic and sometimes tragic events. Henry’s much anticipated male heir, the future Edward VI, was born there but the child’s mother, Jane Seymour, died two weeks later. Four years after that, Henry’s fifth wife, Catherine Howard, was accused of adultery and sent to the Tower to be executed just as Anne Boleyn had been.

I visited the grand chapel with its massive timber and plaster ceiling, originally begun by Wolsey and finished by Henry. In a private area off the altar is the royal pew where the royal family sat separate from the general congregations. It is said that Catherine Howard escaped from her guards and ran into the chapel where Henry was worshipping, to plead for her life. Her ghost is said to still haunt the chapel.

Outside, in the grand palace gardens, I wander along the paths enjoying the scent of roses and the other flora. There are no authentic remains of Henry’s gardens other than one small area planted in 1924 to resemble what it must have been like. Today, the dominating feature of the landscape was constructed by Sir Christopher Wren for the new palace. One of the main attractions is the maze which covers 1/3 acre and a half mile of paths. It could be a replica of an earlier maze planted by Cardinal Wolsey.  I wandered around the paths with their high hedges, enjoying the laughter of a group of school kids trying to find their way out. You can easily get lost in the maze, so I followed them and eventually came back into the gardens. 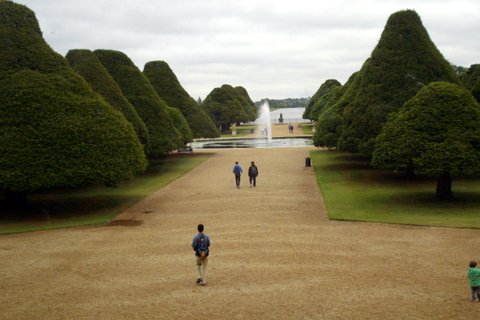 Katherine Parr was the last of Henry’s six wives and the fourth commoner to become his consort. Henry VIII died in January 1547 and was succeeded first by his son Edward VI, then by both his daughters, Mary I and then Elizabeth I.  Six months after Henry’s death, Katherine married her fourth and final husband, Thomas Seymour, but the marriage was short-lived as she died in September 1548, possibly from the complications of childbirth.

I didn’t have any luck finding the Henry or Katherine re-enactment participants that day, but it was an enjoyable adventure just the same. At least I had walked in Henry’s footsteps and saw the parts of the palace where he used to spend his leisure days with his various wives.

It wasn’t until a later trip, when I visited Warwick Castle  that I found Henry VIII and his six wives all together and posed for a photo with them.

Written by and photos by Ruth Kozak for EuropeUpClose.com

Love Hampton Court Palace - and what a great idea of going there on the Thames boats!

Oh dear, sorry that someone took offence at me saying "down" the Thames instead of "up".