Death is no laughing matter in most parts of the world. But things are different in Săpânța, Romania, a small village in the northern part of the country close to the Ukrainian border. For the last 80 years, the Merry Romanian Cemetery has opted to make death a source of amusement, even joy, and a snapshot of local life. 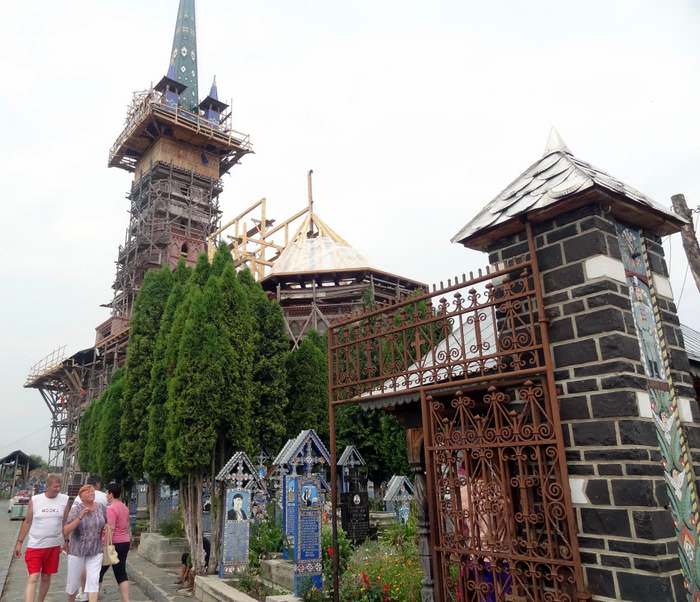 Entrance to the cemetery

When I visited Săpânța last summer, the weather was drizzly grey and gloomy, atmospherically in tune with a cemetery’s expected vibes. But what I found was a celebration of the human condition. It was like Thornton Wilder’s Our Town being chiseled on gravestones.

Well, not gravestones exactly. The 800-some grave markers in Săpânța’s Cimitirul Vesel, or “Merry Cemetery”, are crosses carved out of oak wood. Each is like an illustrated obituary, with one or more panels depicting the life – and sometimes the death – of the person buried beneath. Poems specific to each individual accompany the brightly colored artwork.

So one shepherd is presented watching his flock of sheep, with an armed robber looming just behind. Then the latter gloats triumphantly as he holds aloft a decapitated head. A farmer lies squirming under a tractor tire in the field. 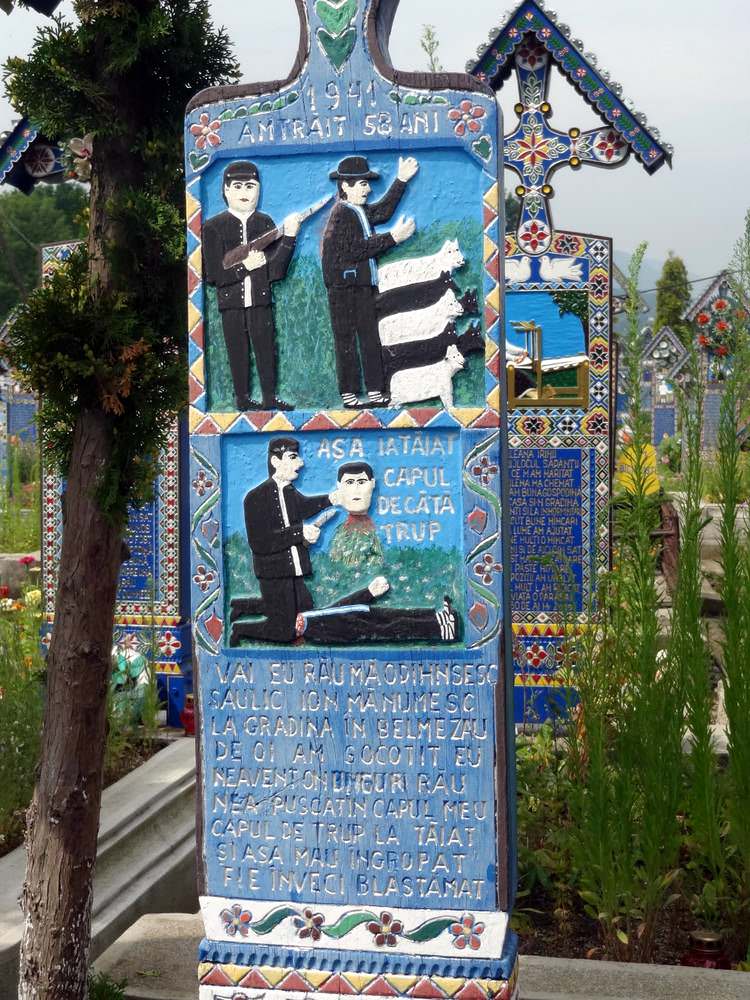 The shepherd and the robber

Other illustrations, less morbid, focus on the person’s life – a child hugging his mother, a horseman on his horse, a woman dancing in traditional costume, a grandmother sweeping.

The accompanying verses echo the naïf style of the images; they are written in rustic peasant-like Romanian, my guide tells me (I wouldn’t have a clue). They tell each life story without Shakespearean flourishes, but with wit and clarity. One of the most quoted, and universally appreciated, is about a mother-in-law: 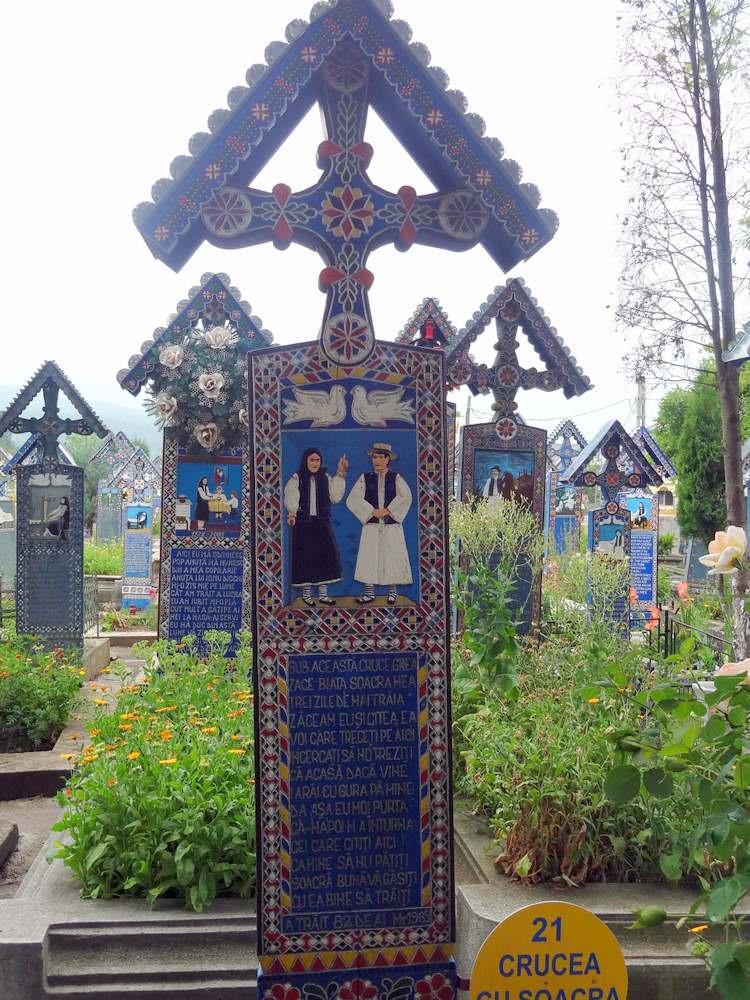 The grave marker of the Mother-in-law

Under this heavy cross
Lies my poor mother in-law
Three more days should she have lived
I would lie, and she would read (this cross).
You, who here are passing by
Not to wake her up please try
Cause’ if she comes back home
She’ll criticize me more.
But I will surely behave
So she’ll not return from grave.
Stay here, my dear mother in-law! 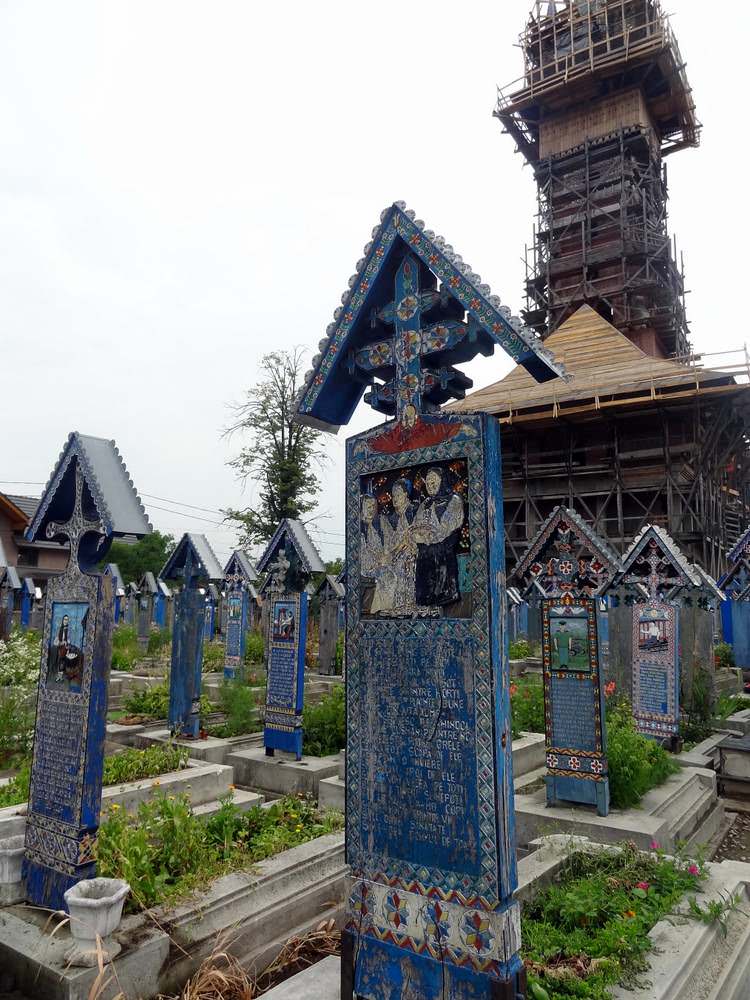 Another describes a local bon vivant — with bottle in hand – from his point of view:

Here I rest
Stefan is my name.
as long as I lived, I liked to drink.
When my wife left me,
I drank because I was sad.
Then I drank more
to make me happy.
So, it wasn’t so bad
that my wife left me,
Because I got to drink
with my friends.
I drank a lot,
and now, I’m still thirsty.
So you who come
to my resting place,
Leave a little wine here.

Not all the poems and illustrations at the Merry Romanian Cemetery are so funny. 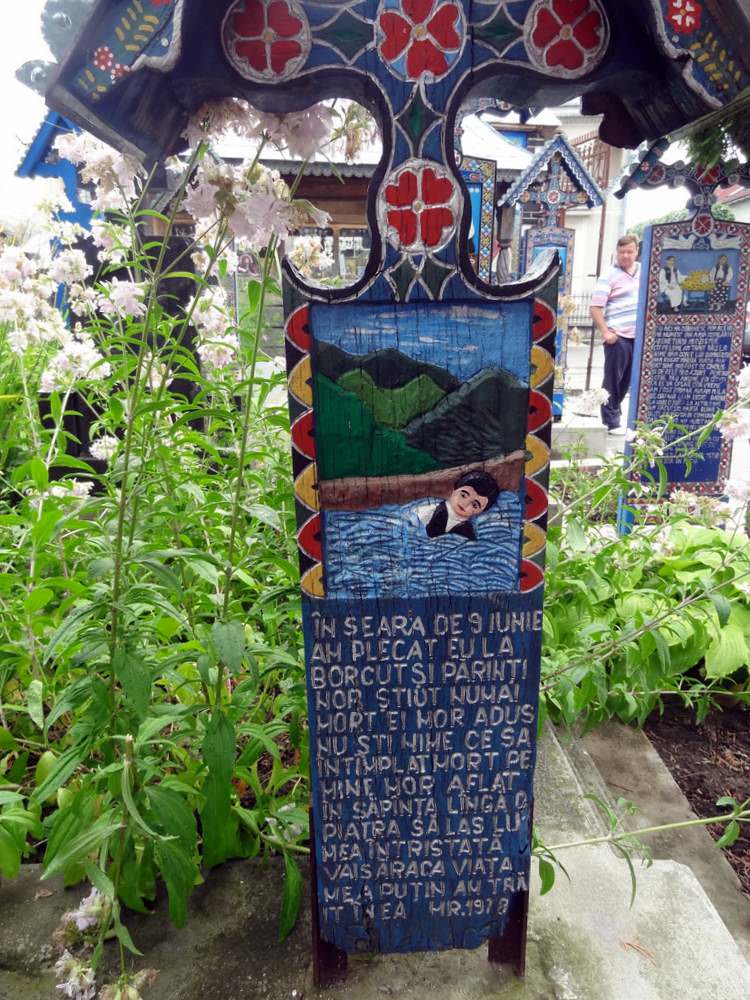 Grave marker of someone who may have drowned

Clearly the artist was affected by the untimely deaths of children, and some of these convey tragedy in a few moving words. This is the inscription for a child hit by a car

May the flames torch you, taxi
That came from Sibiu
As wide as the Romanian Country is
You couldn’t stop anywhere else
But near our house
Hitting me
Grieving my parents
For nothing they will grieve more
Than their dead boy
Nor is there anger greater
Than a dead daughter
As long as my parents live
They’ll mourn me.

This unconventional way of honoring the dead began around 1935, when the local artist whose commissions included cemetery markers decided to personalize the wooden crosses he was hired to carve. Stan Ioan Pătraş was not an educated man in the sense of formal schooling, but he was a keen observer of village life. Because he was a local and understood his fellow villagers, his knowing and sympathetic portraits of their lives – in words and images – were accepted. In fact, he was sought after for the next 40 years. 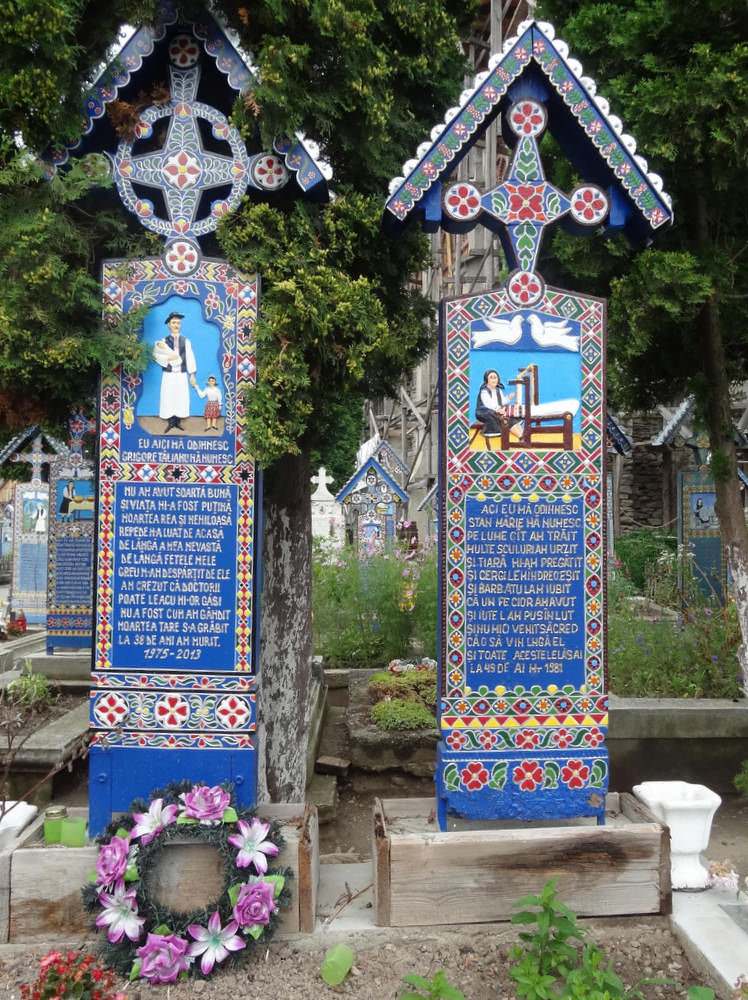 Some years before his death in 1977, Pătraş hired three apprentices to learn his craft so that his work might continue. The most sought-after of these, Dumitru Pop, has been contributing to the cemetery’s permanent population since 1975. His artistic style is somewhat different from that of his predecessor, but certain visual rules apply: The background is always bright blue, now known as Săpânţa blue, a color of hope and freedom. Green represents life, red is passion, yellow is fertility, and black is (of course) death. Symbols such as white doves and black birds have developed over the years. Imagery has changed as the rural life of horse-drawn plows and knitting looms has given way to tractors and taxis, and clothing has shifted from traditional peasant garb to modern dress, including suits and blue jeans. 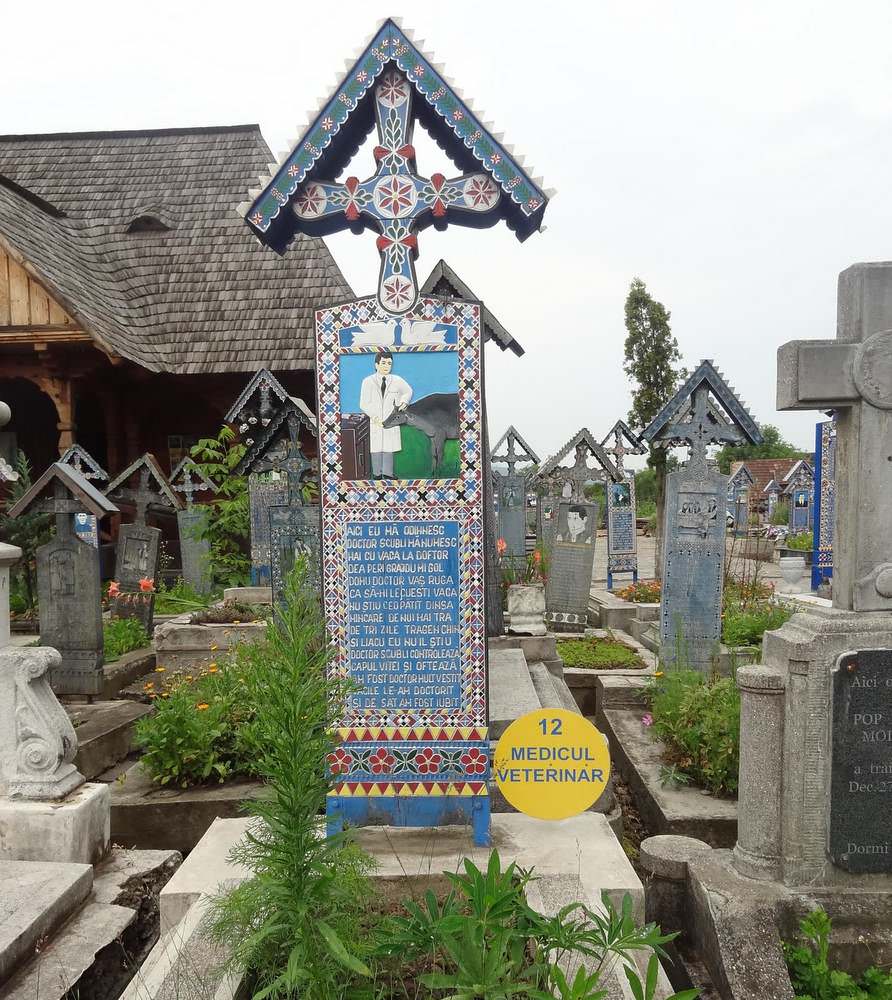 Dedicated to a loved veternatian

The day I visited the Merry Romanian Cemetery, most other sightseers (as opposed to locals paying respect) were Romanian. But that may be because the weather that day was grim.  About 200,000 tourists come each year as part of a visit to Maramures county (like a Romanian version of Amish enclaves in the US). There is lots to see, do, and eat.   The cemetery itself is easy to find in a village of about 5,000 people, and the cost is minimal (only a few lei, around a dollar at 2015 exchange rates) but it would be a good idea to hire a Romanian-speaking guide . The artwork is often self-explanatory, but the stories add much to your understanding of what lies beneath — both the tombs and the town.

How quaint! and so colourful!