If Paris is the capital of French fashion, Les Galeries Lafayette Boulevard Haussmann is its window displays, many Parisians say. In fact, Les Galeries stands for a lot more than that. Founded over one hundred years ago, the department store serves as a reference for ‘made in France,’ goods. Therefore, when you walk through the glass doors on 40 Boulevard Haussmann, 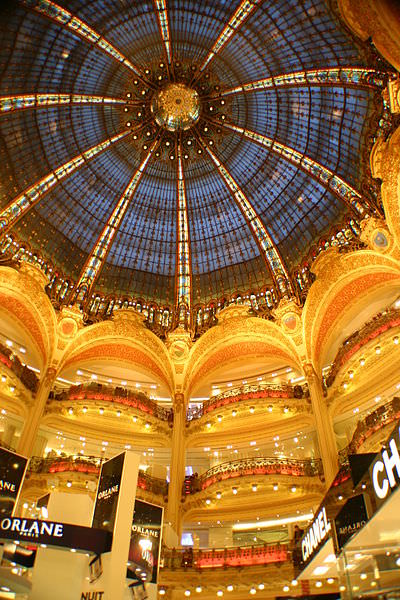 you’ll be strolling through dazzling displays of merchandise that will provide you with a delightful taste of bits and pieces of French culture.

Once upon a time, there were two cousins, Alphonse Kahn and Theophile Bader. Originally from Alsace, they decide to settle in Paris to start a business. On December 13, 1893, the young men open their first boutique. Located at the intersection of the Lafayette and the Chaussée d’Antin streets, the tiny store specializes in accessories for women — ribbons, lace, veils, and gloves. A daring concept for the time!  But their vision proves correct. The store becomes the rage among women from all walks of life. A new phenomenon develops:  some women use part of their lunch break to go shopping. And this is how a new word is invented to designate this new breed: ‘midinettes,’ – it literally means light lunchers.

Midinettes have good reason to lunch on the run. The ingenious founders have innovated concepts to make the shopping experience more pleasant and convenient than in most stores. At les Galeries, women can stroll through the aisles where a remarkably wide assortment of goods can be found. Furthermore, they can freely touch and compare the items and even try them on. And, to top it off, they don’t have to ask for the price – it appears clearly on each item. 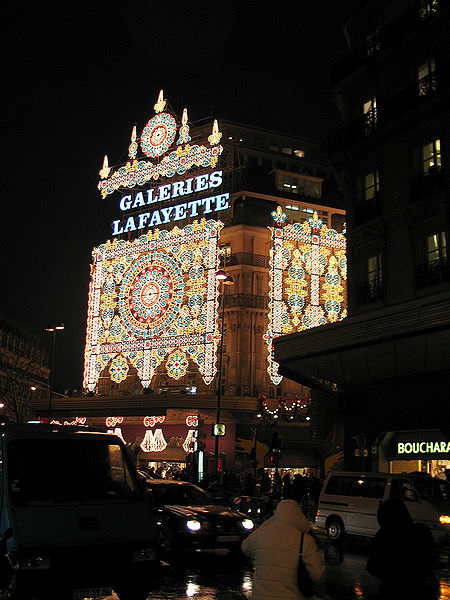 Alone at the head of the company, Theodore Bader bases his strategy around two principles: novelty and diversity. He constantly revamps the collections and keeps adding new departments, including men’s wear, furniture, toys and dinnerware. He also brings fashion down to the streets by maintaining relatively low retail costs. The business booms. Between 1896 and 1905, the company will purchase several buildings on Boulevard Hausmann, including the numbers 40 and 42 where the flagship stores stands. Today, still headed by the founder’s heirs, the company counts 62 stores including one in Berlin and one in Dubai. The lively, wide-ranging approach initiated by the two cousins remains the basis of the Galeries Lafayette’s strategy.

Opened in October 1912, the store receives about 100,000 visitors a day. The curious and serious shoppers come from all around the world to admire the décor, browse through the aisles filled with produits de luxe – for which Les Galeries often has the exclusivity, stop by the Lafayette Gourmet department with a cellar of 300,000 bottles or head up to the sixth floor to the largest souvenir shop in Paris. Furthermore, today, women can have the time of their life in a 14,000 square meter clothing department, “Chic et 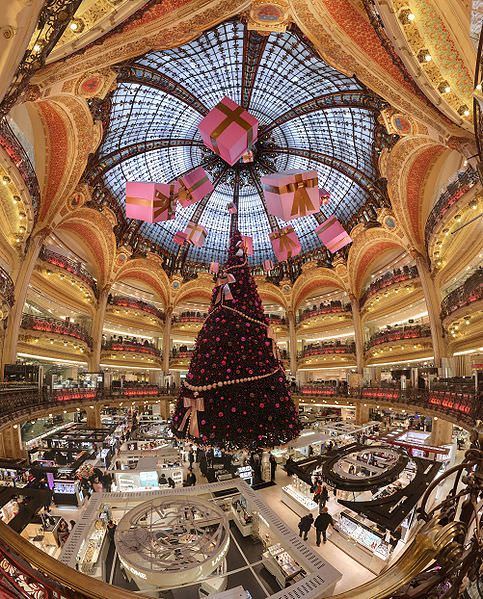 choc.”  The department spreads over three floors and proposes the best and most original collections from around the world both from top designers and new talents. Men, too, can play at Lafayette Homme.  The 10,000 square meter elegant space, ranks as the first European men’s fashion store.

To many visitors, Les Galeries Lafayette Haussmann evokes the spectacular Christmas decoration. Every year, adults and children alike, wait eagerly for the unveiling of the highly decorated facades and window displays. From November through early January, crowds flock the number 40 address to contemplate the brightly lit building and marvel at the windows, each one a superbly crafted work of art.

Next time you step foot inside the department store, you may want to pause for a few seconds and think about the two young ambitious cousins who started their empire in a tiny boutique on a street corner.

Galeries Lafayette
40, blvd Haussmann,
Paris, 9eme
9 restaurants and 2 bars including Laurier, where you will taste Mediterranean flavors; Maxim’s, ideal for a quick lunch or Lina’s perfect for the entire family.
Closed on Sunday
Metros: Metro Havre-Caumartin and Chaussee d’Antin-Lafayette