You could visit Venice for weeks, months, or years, and never tire of the multitude of sights, sounds, tastes, and experiences of this marvelous city. However, there are many other great places to see within a few hours of Piazza Roma. This makes it the perfect destination for a Road Trip to explore Northern Italy.

On this three day and 2-night Italy road trip, we first went to the town of Padua, and then on to Ferrara and Castle Este. From there, we left to explore beautiful Bologna. Finally, we took a quick trip to Maranello, site of the fantastic Ferrari Museum to check out some shiny red cars. If you are not sure about driving in Italy, you can also easily do this trip by train or bus, or stay in Venice and do individual day trips from Venice.

For more Italy Road Trip Ideas, take a look at these itineraries:

7 Days in Italy Itinerary from Venice to Rome 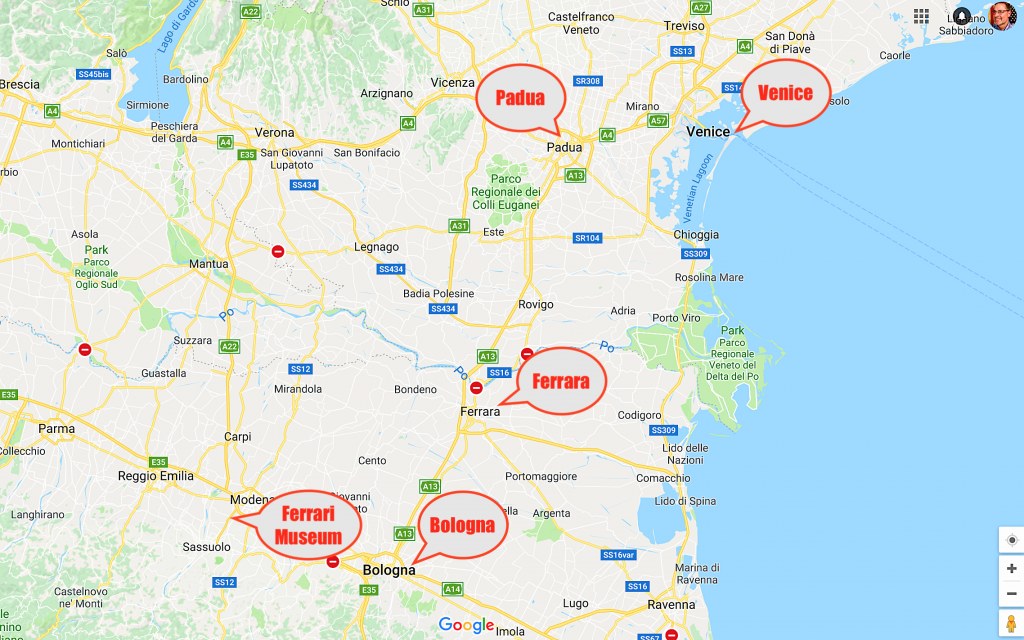 Padua; the place to start your Italy Road Trip from Venice

Padua is just forty-five minutes west of Venice. The university, where Galileo once taught, was established in 1222. Its large student population keeps the town young and vibrant. The Scrovegni Chapel is one of the landmarks of this city of 200,000 people. With beautiful frescoes by Giotti covering the interior of the chapel, as well as an adjacent art museum and a beautiful park, the Scrovegni Chapel is a popular attraction for locals as well as tourists. 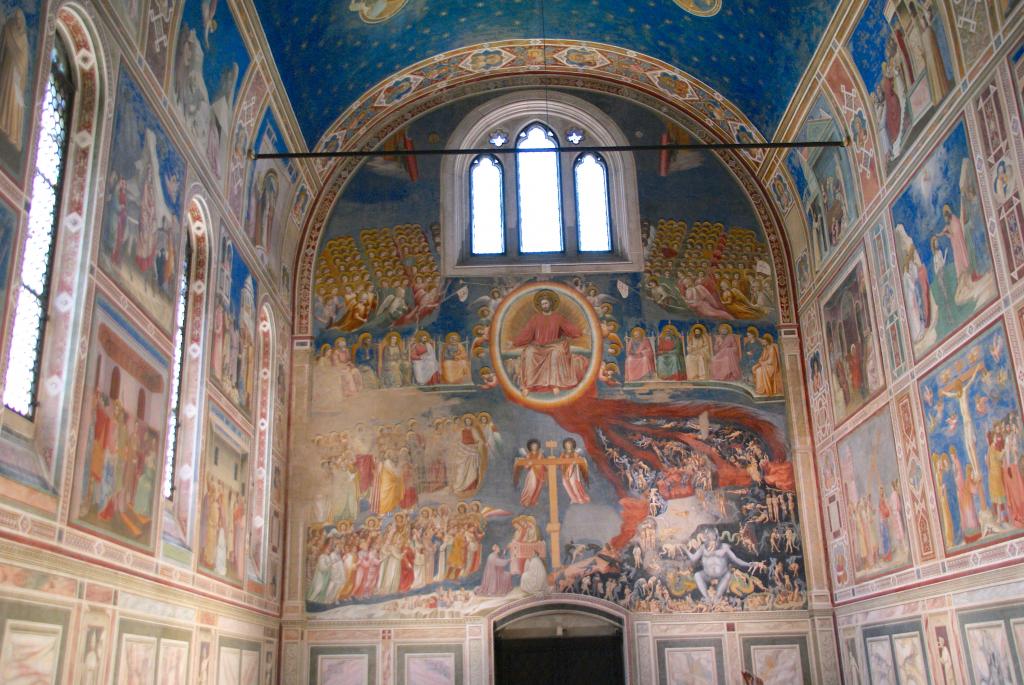 A fire devastated the city in 1174, requiring residents to rebuild much of the city. Padua has been under the rule of many entities, including Roman, Venetian, Austrian, and Italian, and you can see their various influences throughout the town.

The city survived WWI and WWII, but did suffer some substantial losses, including severe damage to the railway station and the Church of the Eremitani, which housed priceless frescoes by Andrea Mantegna. Luckily, many other interesting churches, statues, villas, buildings and parks dot the city, including the spectacular Basilica of Saint Anthony of Padua.

While you can easily explore the sights of Padua on your own, you can also join a guided tour to show you around.

Probably the best-known landmark in Ferrara is Castle Este. Built in 1385 to protect the town from external threats, the castle featured four large bastions. It is surrounded by a moat.

The Garden and Loggia of the Oranges, a symbol of peaceful nature, is an example of Renaissance Ferrara’s love affair with gardens and nature. It is a serene experience to walk among the citrus trees, alone, with history and views of the city. We also enjoyed the Saletta dei Giochi, or small chamber of games, and the intriguing Saletta dei Veleni, or small chamber of poisons. In this chamber, medicine, and perhaps poisons, were produced by court pharmacies. 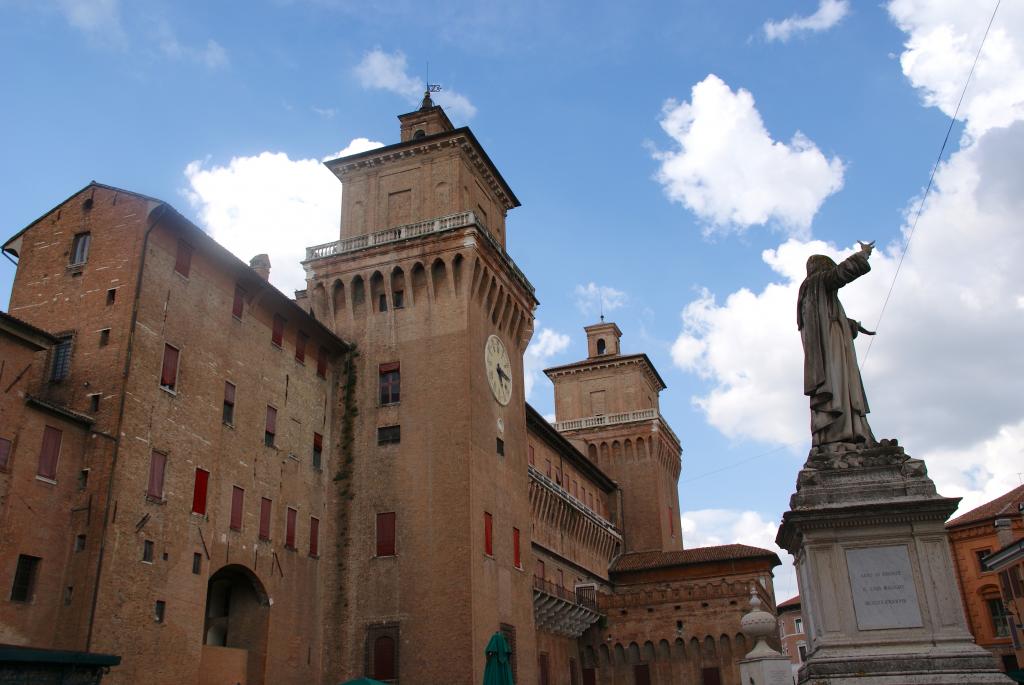 After an interesting tour of the castle, we enjoyed an aperol spritz in the large courtyard, where LCD Soundsystem, a popular techno-rock band, was preparing for an evening concert. I loved the vivid contrast between the old, historic 14th-century castle with its moat while listening to the ultra-modern music of the 21st century.

Early the next morning, I hopped on one of the bicycles provided at my hotel and rode past the Jewish cemetery towards town. I turned right on Corso Porta Mare, and took a couple of laps around Plaza Ariostea. Veering north on Via Borso, my eyes caught sight of a church-like building, with Roman arches, statues, blocks of granite and open fields.

Upon closer inspection, I found I was in what locals refer to as “the countryside inside the city”. Cimitero della Certosa is a fascinating cemetery with an impressive building complex (which used to be a church). It also has grounds, with graves, headstones, and statues surrounded by fields of green grass, lavender, and wildflowers. 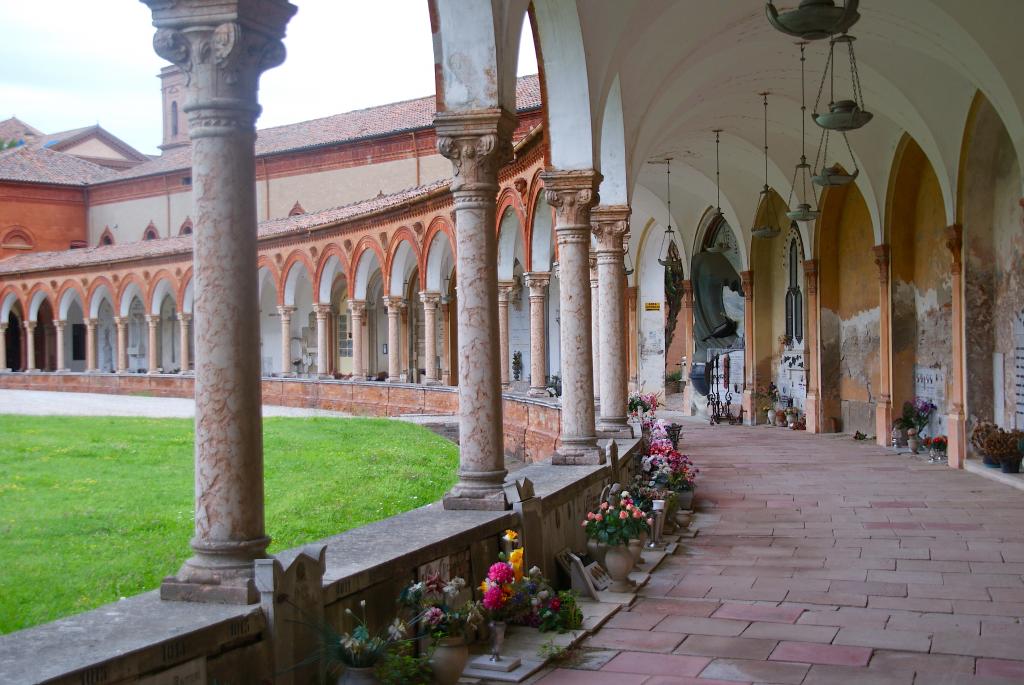 Where to Stay in Ferrara – Hotel Villa Horti della Fasanara

A small boutique hotel in the middle of a beautiful park with large trees and gardens, the wonderful Villa della Fasanara has conveniently located a short walk to parks, shops, restaurants, and Castle Este. The villa is a delightful mix of old and new.

The suites inside the old stone building have been remodeled so the bedrooms, living rooms and modern baths have all the style and elegance to make your stay comfortable. Another great plus was the free bicycles available to guests. I took one out for a few hours and loved riding through the streets, parks, and cemeteries at my leisure. 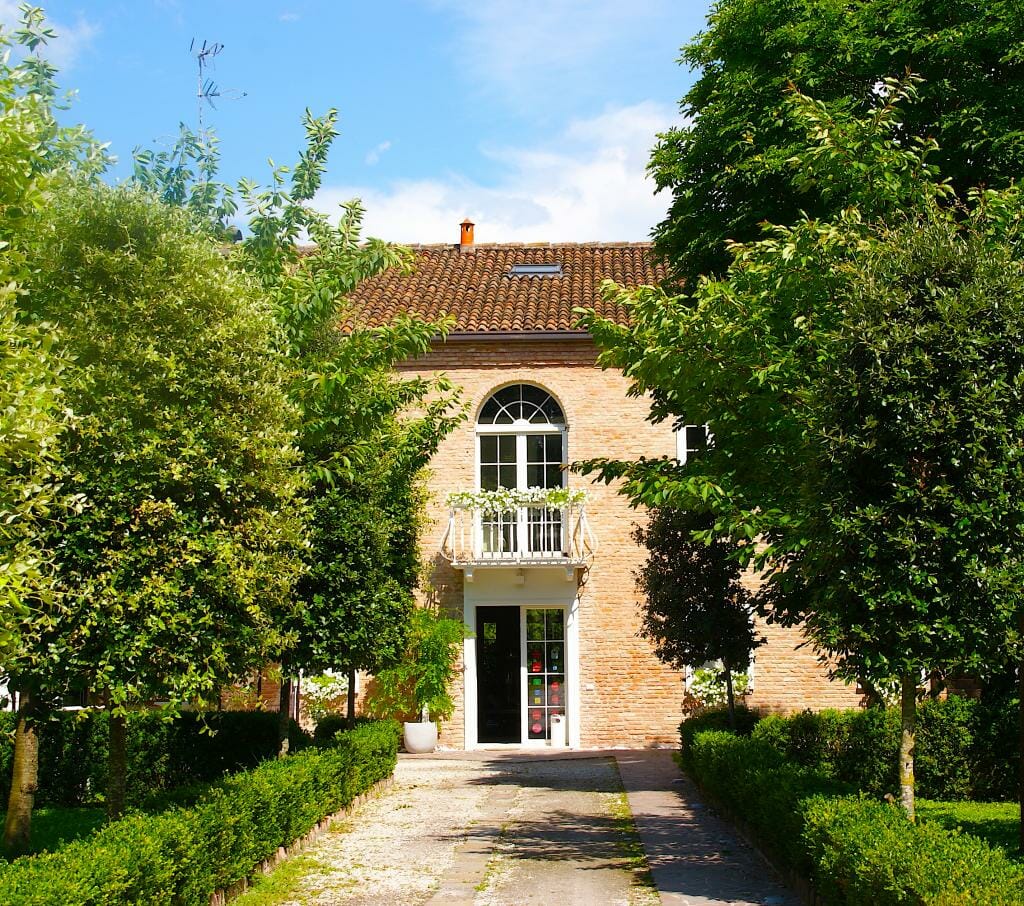 Elda and her staff have done a wonderful job of creating the perfect place to stay while enjoying Ferrara. She was so friendly when we checked in, and helped up make reservations at a great restaurant in town. With plenty of outdoor seating on the patio, it is very relaxing to enjoy a drink and conversation in the gardens. In the morning there is a nice breakfast buffet to get your day off to a great start. Villa Horti della Fasanara is indeed a romantic luxury boutique hotel of the highest quality.

Get the best prices for Horti Della Fasanara here>>

Piazza Maggiore is the heart of historic Bologna. Upon entering this large area, the Fountain of Neptune greets visitors triumphantly hoisting his trident, surrounded by angels, dolphins, sea nymphs, and a coat of arms. Erected in 1566, this fountain is a work of art by Giambologna depicting the god Neptune stilling the seas. With an innovative design, the fountain symbolized the recent election of Pope Pius IV as a powerful but benevolent ruler. 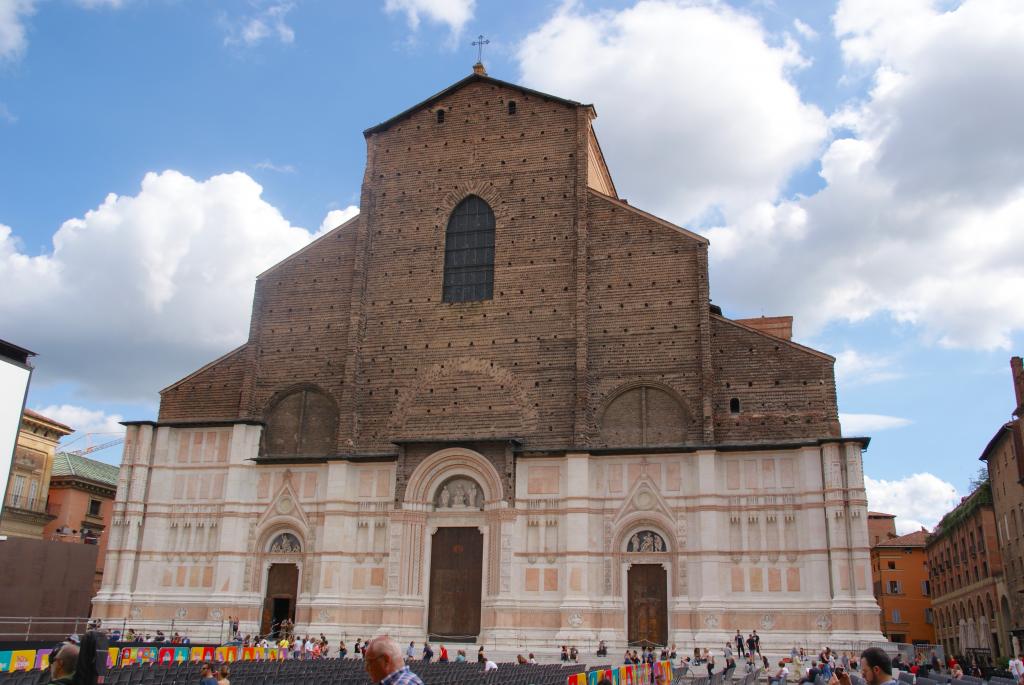 Like Padua, Bologna also has a large student population. Founded in 1088, the university is well known for its Law, Medicine, Engineering, and other programs of study. Adjacent to the basilica is the Archiginnasio, once the main building of the University.  It currently holds the large municipal library and the Anatomical Theatre, where anatomy classes and dissections were held for medical students. South of Piazza Maggiore are the Due Torri, or Two Towers – the smaller Garisenda and the taller Asinelli, which stands at 97m. Built for defense and for prestige, these two towers are among only twenty that survive out of over a hundred that once existed in Bologna. 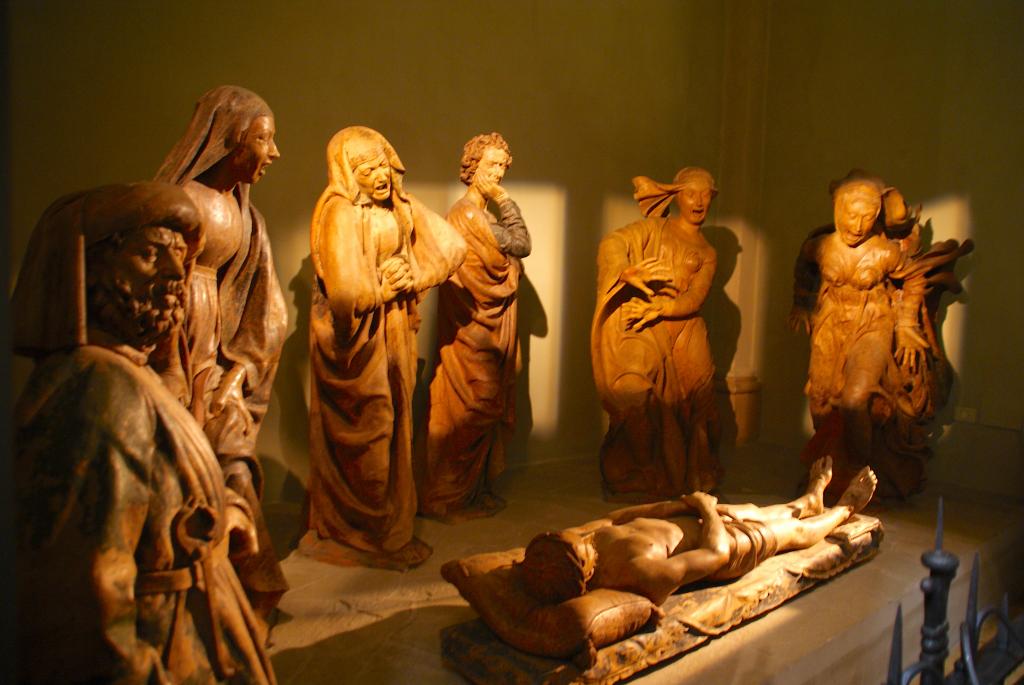 In the sanctuary of Santa Maria della Vita stand six expressive statues, Lamentations Over the Dead Christ, by Niccolo dell’Arca. These six amazing terra cotta statues, displayed in a corner of the church, show the emotions and grief of people witnessing the death of Christ. Each face and gesture vividly displays the emotions of those witnesses and the profound impact of this momentous event. Many scholars and art aficionados agree these impressive figures are some of the most magnetic and compelling sculptures ever created.

Foodie Tip: Bologna is also renown for its excellent food, so if you can squeeze in an extra day, we highly recommend a food tour or cooking class to enjoy some delicious and authentic Italian fare.

Hotel Internazionale is located in the heart of Bologna. On the main street Via Indipendenza, this lovely renovated hotel in a historic building is near the train station and shops, restaurants, and museums. The hotel has a calm and elegant feel, with beautifully decorated air-conditioned rooms and comfortable beds. And unlike many other Italian hotels, the Wi-fi worked great. 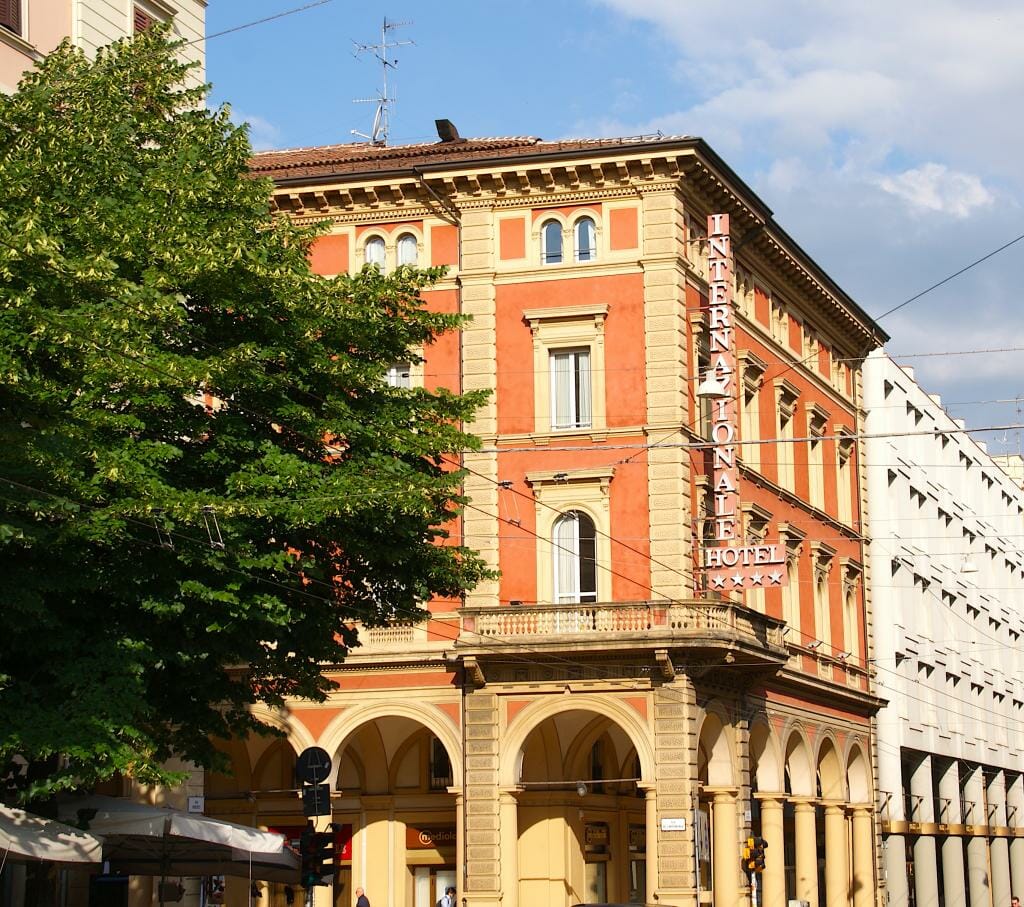 They have a lovely dining room, where we enjoyed a wonderful buffet breakfast in the morning and limoncellos in the evening. We had a rental car, so the attached parking garage was very convenient. With its great location, clean, comfortable rooms, and superb staff, Hotel Internazionale is a great choice when visiting Bologna.

Who doesn’t like bright red sports cars? Especially when that car is a legendary Ferrari, one of the most prestigious brands in the world. Enzo Ferrari is known for saying, “If you can dream it, you can do it”.  After touring this auto wonderland, it is easy to see that Enzo dreamed, and dreamed big.

Interesting tidbits about the history of Ferrari is intertwined with sparkling, sporty automobiles, starting with early models up to the most recent models. If you are interested and willing to pay the price, there are even several places in town you can rent a Ferrari to drive for yourself. There’s no better way to make your Italy road trip from Venice to Bologna more special. 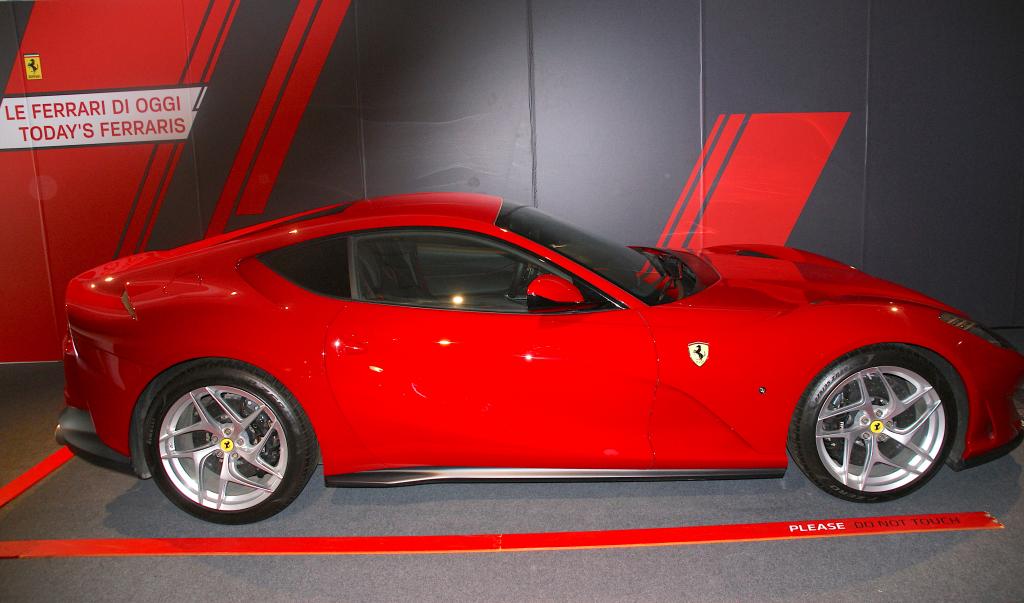 Padua, Ferrara, Bologna and Maranello are great places to visit to get a feel for Padua and the wonderful Emilia-Romagna area of Northern Italy. Just a couple hours away from Venice, these Italian treasures make a great Italy road trip. Castles, historic churches, magnificent works of art, great food, wines, and world-class automobiles await you. 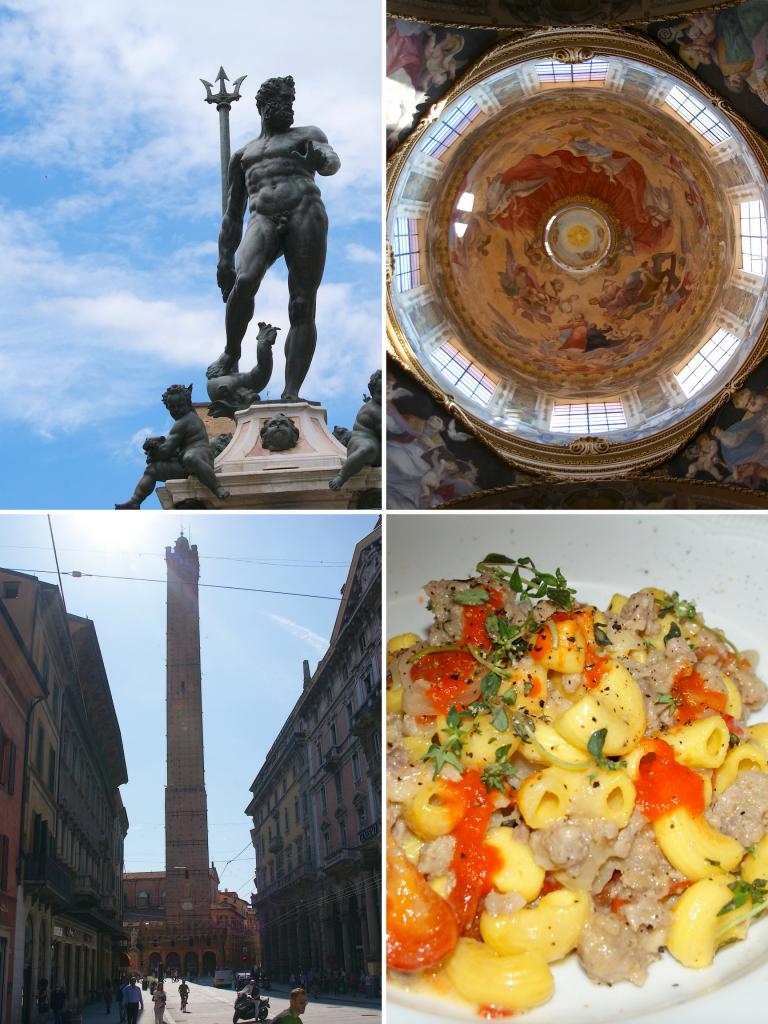 Italy Road Trip from Venice to Bologna – was written by Scott Kendall for EuropeUpClose.

Thanks for the hospitality and assistance of the Bologna Tourist Bureau. The author was also provided complimentary accommodations at Hotel Villa Horti della Fasanara in Ferrara and Hotel Internazionale in Bologna.

Italy Road Trip from Venice to Bologna – Pin for Later: 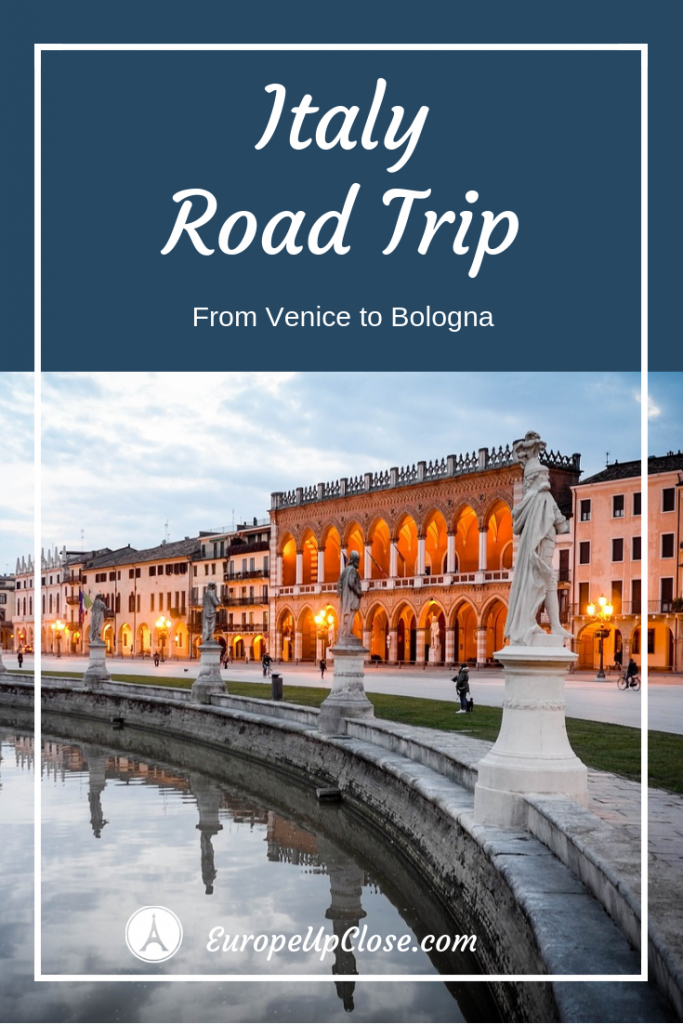