Here is where the rolling green hills of Ireland come to a screeching halt. Staggering cliffs drop seven hundred feet into the Atlantic, making the Cliffs of Moher  one of the highest coastlines in western Europe. 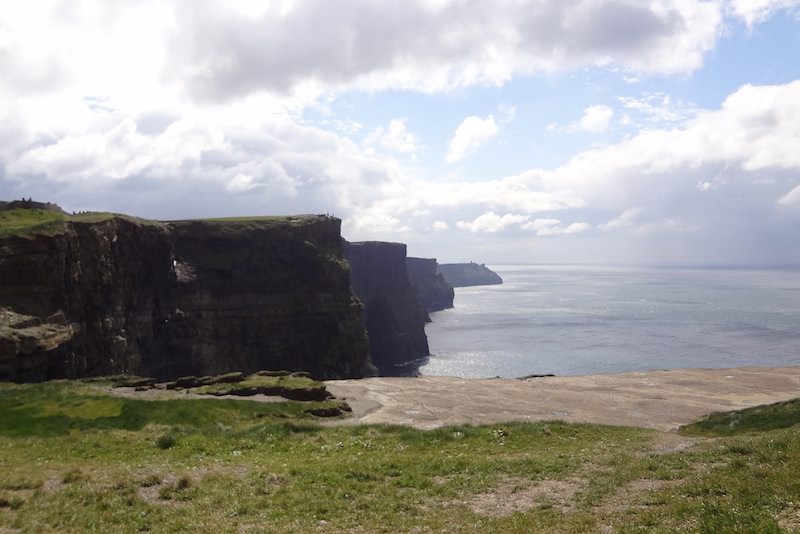 Cliffs of Moher in temporary sunshine

Some travel guides recommend waiting for a sunny day to visit the cliffs, which is nice, if you have the luxury of waiting for clear skies in Ireland. But it’s better still to go on a day of unpredictable weather, the kind of wind-swept afternoon that can change from sun to clouds to storms in a matter of minutes. The dramatic power and beauty of the cliffs are brought to life under turbulent skies. To stand at the tip of the zig-zagging cliffs makes for an irresistible place to watch the sky closes in, bringing a wispy curtain of rain from the distance. Then, just as quickly, the clouds disarm and retreat, leaving shadows over the inland hills as the sun returns.

Located in County Clare, on the southwestern edge of the Burren region on Ireland’s west coast, the Cliffs of Moher draw nearly one million visitors every year, making the area one of the country’s top tourist attractions. But don’t let the thought of crowds at the Cliffs of Moher Geological Park deter you: the area has been beautifully preserved through careful planting by the Clare County Council. For the most part, the panoramic views of cliffs are blissfully unobstructed by man-made elements; even the park’s facilities—gift shop, museum, cafes, restrooms—were built into the side of a hill, rendering them nearly invisible. 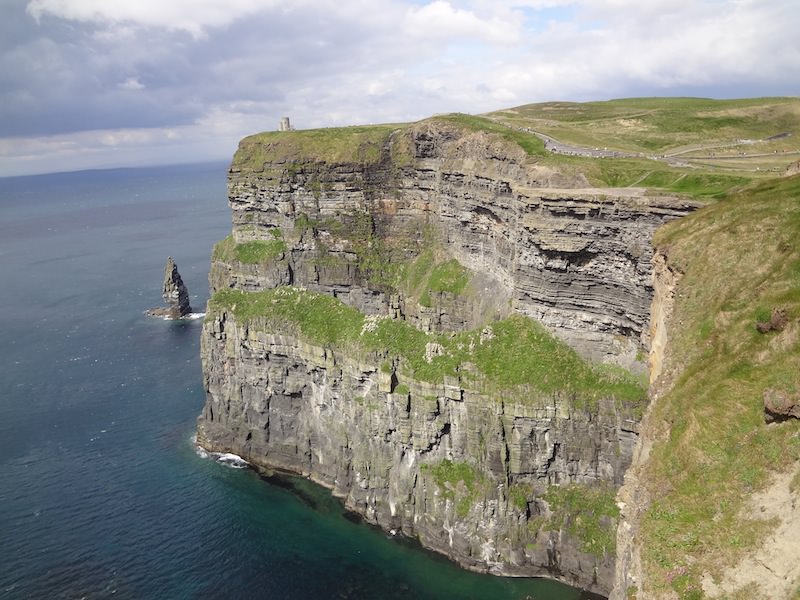 Starting from the visitors’ center, the path to the Cliffs of Moher forks off in two directions. On the right, a paved walkway leads up to O’Brien’s Tower, which marks the highest point of the cliffs. The rook-shaped building was built in 1835 by Sir Cornelius O’Brien. Though the tower was officially built as an observation point for Victorian-era tourists from England, rumor has it that O’Brien’s true intent in constructing the tower was to impress female visitors. (And as one myself, I can testify—it is rather a romantic sight, a lone castle standing atop a grassy, windy slope, facing the endless sea.) 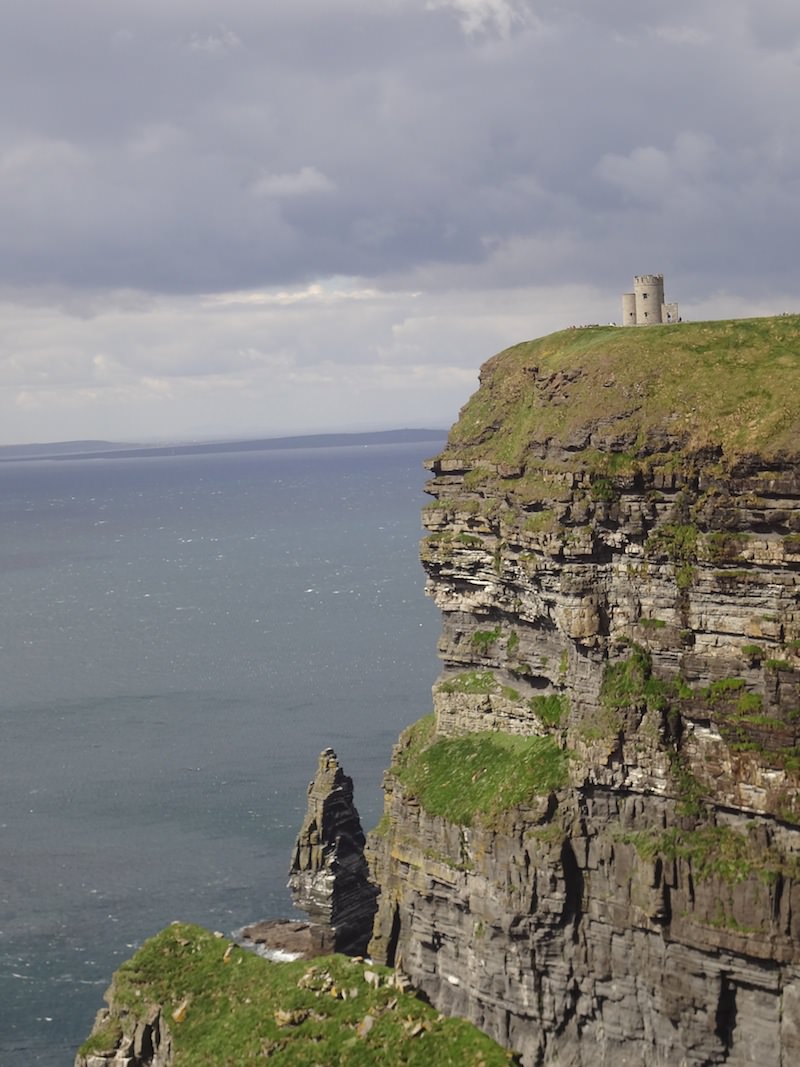 But the real excitement begins after heading back to the starting point and walking along the left branch of the main pathway, which winds around the cliffs’ edges. The walk here is narrow and unpaved, allowing for a view so steep that if you look down, you may feel stomach acid coming up. Before long, O’Brien’s tower becomes little more than a blip on the horizon. The designated trail ends abruptly, with a sign warning visitors not to go any further. But beyond the posted notice, the coast still beckons, and the little barrier fence simply begs to be climbed over. Even little old tourist ladies will ignore the park’s warning and hop the fence, following a trail worn into place by previous disobeyers of signs. The pathways beyond the park’s boundaries are narrower, rockier, and noticeably absent of any guardrails. 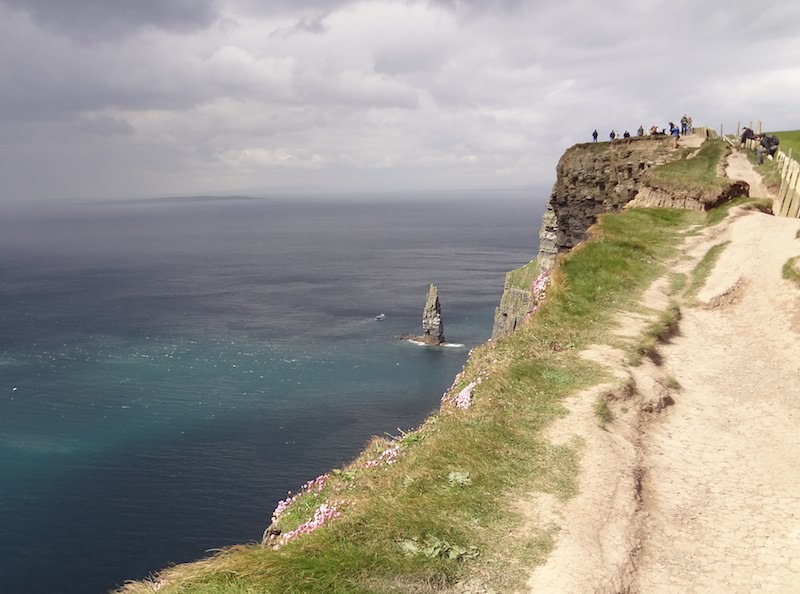 Unguarded pathway along the cliff

Nearly any point at the Cliffs of Moher will provide breathtaking panoramic views, and this is especially true beyond the park limits. Looking towards the sea are the jagged sandstone and shale formations that make up the cliffs; further out, the Aran Islands (http://aranislands.ie) dreamily drift near the horizon. Turning inland, the view changes dramatically, back to the lush green valleys, gridded by centuries-old stone walls, dotted

with sheep and trees: a typical quaint Irish landscape. All in all, it’s sure to be an unforgettable sight, in any weather conditions.

Getting to the Cliffs of Moher is easiest by car or bus. A number of charter coach companies provide tours of the Cliffs of Moher, departing daily from Dublin and nearby Galway. These tours make for easy, affordable day trips, and often include many notable stops along the way: the Aillwee Cave, Dunguaire Castle, the Poulnabrone Tomb, the historic village of Kinvara, and more.

Written by  and photos by Guest Contributor Molly Jean Schoen. Molly is a freelance writer and musician based in Detroit, MI. Follow her on Twitter at twitter.com/silverdaggers.

Patrick at Get Lost In

You were lucky to have such a beautiful day! Thanks for sharing, Molly!