The North Devon coast of England is blessed with many picturesque villages, gorgeous beaches and stunning coastlines, but one gem that shouldn’t be missed is Instow.

This small village is located about halfway between the towns of Barnstaple and Bideford. Most of the life in the village centres around the seafront where there’s a large expanse of golden sand dunes, a cluster of shops, galleries, restaurants and a hotel. Visitors will also discover fantastic views over the rivers Taw and Torridge, and out to the greater expanse of sea. 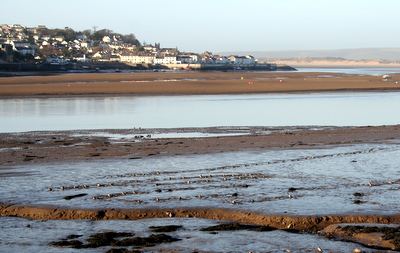 In fact, it’s where the two rivers meet and join the sea. Look closely and you’ll see the so-called Barnstaple or Bideford Bar, a large sand bank that acts as a barrier between the estuary and the sea and which sailors in the past have had difficulty navigating. On the other side of the river, directly across from Instow, is the village of Appledore, where you can spot brightly coloured houses in the distance. If you want to visit Appledore via the water route, ‘ferries’ operate sporadically – but be warned that these are literally tiny boats. So if you’re expecting a comfy, large ferry, you could be in for a shock!

There are short-term, free parking spaces all along one side of the road, right next to the seafront, which soon fill up on sunny days. In addition, there are one or two car parks (one doubles up as boat storage) which open seasonally. As far as public transport goes, Instow is on the bus route between Barnstaple and Bideford, and buses stop here regularly throughout the day.

At one end of the seafront, there’s the beach, sand dunes – and further along – the North Devon Cricket Club, which is tucked away amidst beautiful surroundings. At the far end of Instow, near the North Devon Yacht Club, visitors are led onto part of the popular Tarka Trail, where you can walk or cycle in either direction. The Tarka trail is built on the remains of the old railway and a small preserved signal box is located here too, sometimes opened up to the public for viewing. The signal box is over 130 years old and was the first Grade 2 Listed signal box in the UK.

Although it’s not one of the largest villages in this part of England, Instow has a charm that draws people back, whatever the weather. In the summer, it’s thriving throughout the day, with families on the beach, boats in the water, people sitting on the many benches enjoying the view or wandering around the small collection of shops and galleries. The Waterside Gallery features some excellent examples of work by local artists, crafts people and potters.

Even during the colder months, Instow attracts a number of visitors and locals, if only to sit in their cars beside the road and watch the changing weather or the sea, take bracing walks along the sea front or enjoy the view from the warm enclaves of the quaint pubs or hotel.

If you simply want to relax by enjoying a traditional Devon cream tea, unwinding with a beer, or having a meal, then there are plenty of opportunities to do just that. Instow benefits from two bars, two restaurants and a hotel, so there are adequate choices. The Commodore Hotel stands in a commanding position on the sea front, directly overlooking the estuary and sea. It is a great place to relax, eat and enjoy the view. For cyclists passing through Instow on the Tarka Trail, “The Bar” – the pub closest to the Tarka Trail – is a popular place with a small amount of seating outside.

If it’s an ice cream you fancy, then you’ll be able to indulge at the local store, Johns of Instow, which is amazingly well stocked for a small village, or indulge in the local speciality, Hockings ice cream, made with Devon clotted cream. One of their vans is almost always parked on Instow’s sea front during the summer. Locally caught fish is also often available, sold by local fisherman on the front; just look out for the handwritten signs to tell you if there’s any due in.

Whether you want to unwind and relax, spend quality time with your family, or be active and sporty, Instow offers the perfect space and surroundings for a memorable day out.

The Instow and Appledore area is a fantastic place to come and relax and I would recommend it to anyone. There is so much to do, or if you prefer, great views to look at while you do nothing!

I have taken the family cycling along the tarka Trial last Oct and we had a fantastic day - stopping off at Instow for a much needed refreshment.

I hope you enjoy the area as much as we have over the last couple of summer holidays.