Set along the Neckar river, Heidelberg is a legendary university town immortalized in the works of Goethe, Victor Hugo, and Mark Twain as well as in the 1950’s movie The Student Prince. A favorite with tourists for its charm, extraordinary castle and historical importance, Heidelberg welcomes more than two million visitors every year. (We recommend going in May or September for best weather and fewer tourists.)

What to see in Heidelberg: 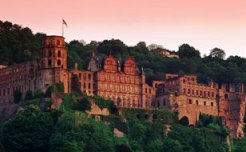 The Heidelberg Castle began as a 13th century fortress and was converted to a royal residence in the 15th century by Prince Elector Ruprech III after he was crowned King of Germany. The castle was destroyed during the Thirty-Years War, was rebuilt and then destroyed again by the French during the War of Succession. In 1732 Prince Elector Karl Theodor began restoration again, but in 1764 , the castle was struck by lightening and the restoration was abandoned. Today the castle ruins have Gothic, Renaissance and Baroque walls with only a few rooms that survive. The beauty of the castle is its placement on a hill overlooking the city and its red brick exterior that glows in the sunset. The castle gardens are lovely and offer a nice view of the city below. You can get to the castle by riding the funicular to the castle entrance, a first stop on its trip to Molkenkur and Konigstuhl viewpoints.

The Church of the Holy Spirit (Heliggeistkirche) 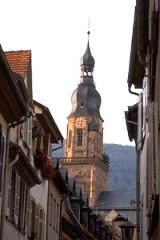 The beginnings of this church date back to the 14th century. It was completed in the 16th century and then destroyed during the War of Succession in the 17th century. It was rebuilt in the early 18th century. There are 204 steps to the top of the church tower where you can get a great view of the city below. The church is located across from city hall on Market Square.

Kurpfalzisches Museum (Museum of the Electoral Palatinate)
Housed in an 18th century Baroque mansion, the Kurpfalzisches Museum has exhibits on the archeological history of Heidelberg, and its growth as an urban area. It also includes a collection of paintings and sculptures containing works of artists dating from the late 15th to the 20th centuries. The museum also has a fine collection of applied and graphic art.
Main Entrance
Hauptstraße 97
69117 Heidelberg
Tel: 06221 58-34020 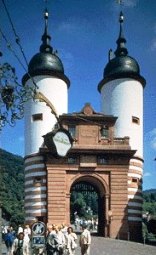 At the entrance to the medieval city, the beautifully arched old bridge once secured the town. It was built by Prince Elector Karl Theodor from 1786 to 1788.

The Philosopher’s Way (Philosophenweg)
Take the 15 minute walk from the Old Bridge up a steep, cobblestone path to spectacular views of the the Castle and city. Turn left after you reach the cement road. We recommend that you save this walk until near sunset. The view is nothing short of spectacular. (The path is unlit, so return before dark.)

Kornmarkt
This picturesque square offers fine views of the castle. The center boasts a beautiful Baroque fountain with a statue of the Madonna.

Haus Zum Ritter
This house, built in 1592, is the only house from that period to survive destruction during the War of Succession. The building was used as a town hall from 1693-1703 and is now a hotel.

Where to eat in Heidelberg: 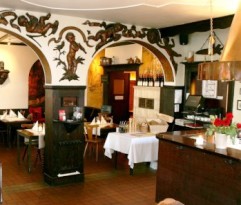 Set near the Old Bridge, this restaurant/hotel has been in operation since 1717! It is decorated in the charming style of the area with murals and polished wooden tables. The food is fabulous and there is nothing I didn’t like. (You will need reservations for dinner.)
Goldener Hecht
Steingasse 2
69117 Heidelberg
Tel: 06221 6599222 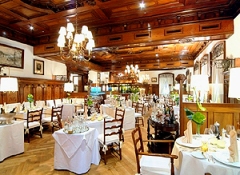 An elegant restaurant with a bit of French flair. This is a high class restaurant in the lovely Hotel Europa. Enjoy the fresh dishes and varied menu.
Friedrich-Ebert-Anlage 1
Heidelberg, BEW 69117 Germany
Tel: +49 6221 5150 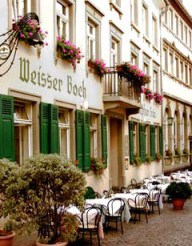 This charming, casual restaurant (part of the hotel of the same name) serves German specialties in a comfortable atmosphere.
A great staff makes your meal even better.
Große Mantelgasse 24
69117 Heidelberg
Tel: +49 6221 – 90 00 0

Neckarsteinach
An easy excursion from Heidelburg, try this 90 minute river boat trip on the Necker River to Neckarsteinach. This tiny, medieval town is picture-postcard lovely. Here, you can meander along the winding town streets stopping to shop or visit the little Gothic church. Those with more energy can hike the “castle trail”, first to the private castle that you can only view from the outside, then on to Castle Hinterberg ruins and then yet another castle even further up the trail. From here you can get spectacular views of the river valley.

A short 12 minute drive from Heidelberg is the Schwetzingen Palace and its wonderful gardens. The palace is a former summer residence of Elector Carl Theodor (1724-1799) and is decorated in the Baroque style. Under his direction, a garden complex was created in Schwetzingen based on Versailles. It is amazing in its beauty and size. This garden complex illustrates through its design, the Baroque, the Enlightenment and the Romantic periods.

[…] Heidelberg Heidelberg’s Christmas market is a charming mix of tradition and romance. Seven squares around the old quarter feature a number of stalls and the traditional Christmas pyramid. There are sheep and donkeys, traditional food and drink from the region, gift ideas and entertainment. Enjoy “Christmas on Ice” at one of Germany’s loveliest ice rinks with great views of the festively lit castle. […]

I love see and visit Germany,and is peoplo there are betiful.

Visited couples of cities in the month of July 2009,country side is beautiful,lots of good beers, Thanks & Regards,

i love germany and is peoplo.