Tucked away amidst the rolling green hills of Southwest England’s Somerset County, the small mystical town of Glastonbury has more myth and legend attached to it than any other place in England—including Stonehenge. 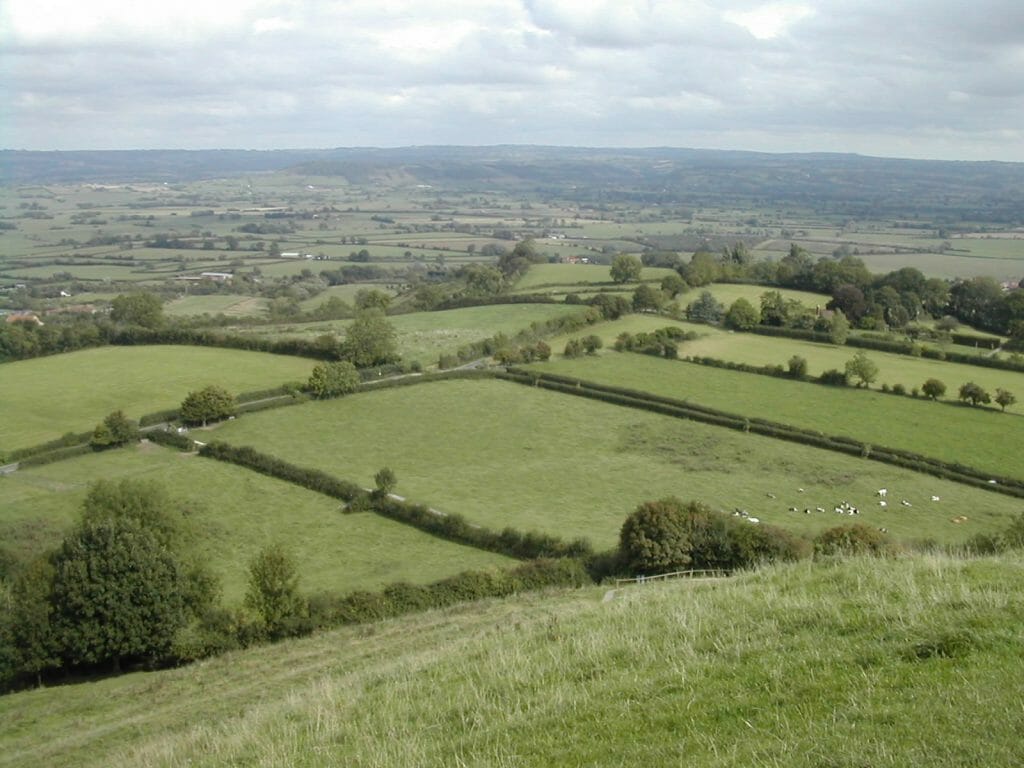 Shrouded in Arthurian myth and rich in mysterious associations, there are early claims that St. Joseph of Arimathea visited Glastonbury in 63AD and founded the first Church of Christ, where the current stone ruins of Glastonbury Abbey stand. Joseph is known as the man who donated his prepared tomb for the burial of Jesus after the Crucifixion. A man of wealth, Joseph apparently led twelve holy men from the East to Glastonbury to found their church. Some also claim that Joseph brought the Holy Grail with him and that it still lies somewhere in Glastonbury. 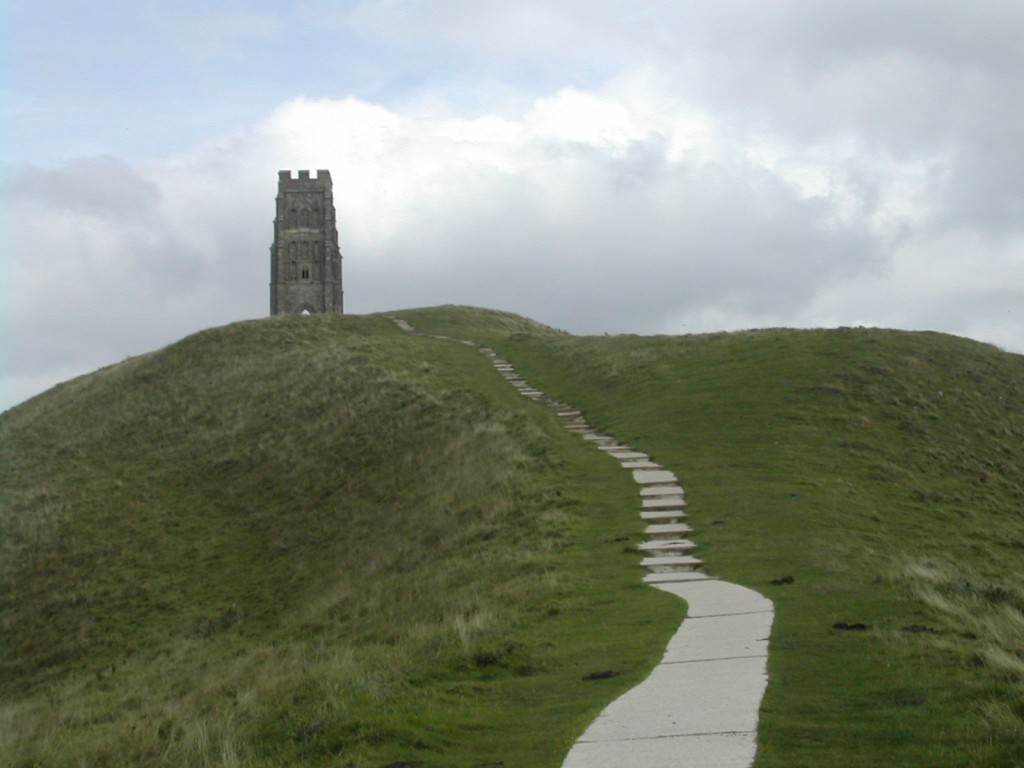 The medieval monastery tower on the Tor

Legend has it that Joseph planted his staff in the ground on the top of Wearyall Hill, as he and his followers were resting (hence the name “weary all”). Certainly a healthy specimen of “Monogyna Praecox”, aka “The Holy Thorn”, grows on the side of Wearyall Hill. Cuttings from the original thorn tree have been grafted to several thorn trees around the town, at St. John’s Church on High Street, and at Chalice Wells. And botanists and historians alike wonder if it is just coincidence that the thorn tree blooms only twice a year, on Easter and Christmas? 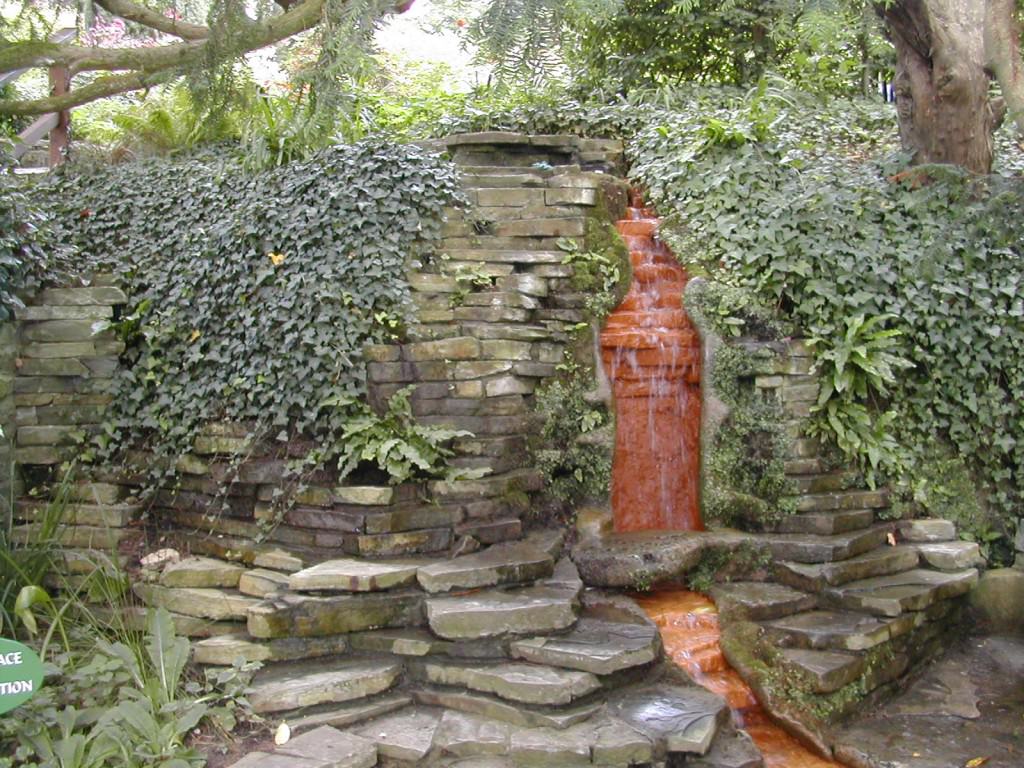 The waterfall at Chalice Wells

Then there’s nearby Chalice Wells; an atmospheric Chalybeate spring so rich in iron that the well mouth is stained a deep rusty red. Joseph is said to have deposited water mixed with blood from Christ’s wounds here, and from that day forth the waters flowed red with the blood of Christ. Of course you’d expect stories of miraculous healings to come from such a place, and indeed they have. By 1750, after a miraculous healing happened here, up to 10,000 people visited each day, seeking a cure for their ailments, and worshiping the sacred waters. 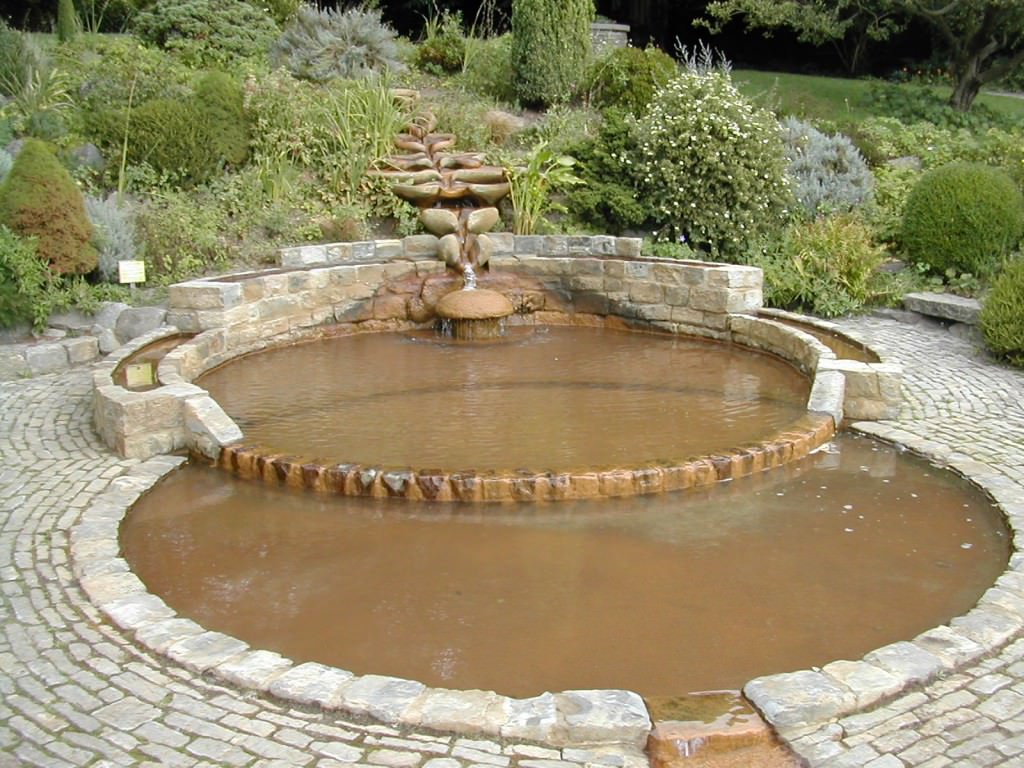 At the base of the hill, Chalice Well’s tranquil gardens make an ideal spot to relax and drink the healing waters. You walk on a cobblestone path through an entryway covered with ivy to find a beautifully landscaped garden filled with colorful flowers, plants, and ancient Yew trees. Stained a reddish-brown from the high iron content in the water, the stream is a mesmerizing sight, as it plummets down the slope. The Flow Form and Vesica Pool, a series of seven rock pools, descend down a small plant covered slope, the final two pools being four yards across, again filled with rusty reddish brown water.

And somehow, Arthurian legend entered the atmospheric Glastonbury mix. Called Avalon, or “Blessed Isle”, Glastonbury may be the final resting place of King Arthur. There’s even a sign that proclaims his former resting place in the grounds of the haunting ruins of Glastonbury Abbey. 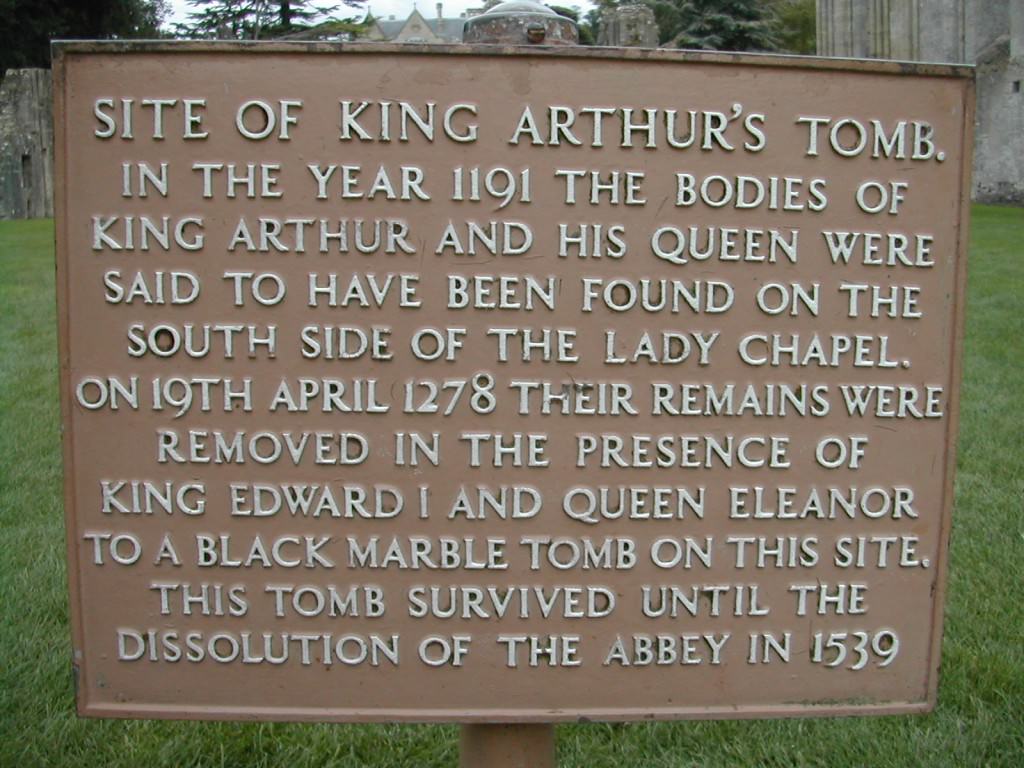 A mile away from Glastonbury village, the tall, haunting gray stone tower—all that remains of the 14th century St. Michael’s Church—stands above Glastonbury Tor like a medieval beacon, visible for miles around on a clear day. Archeologists know that well before St. Michael’s and Glastonbury Abbey were here, Celtic and druidic sites of worship became established in the area, providing further evidence of the area’s early establishment as a spiritual site.

It’s time to explore the ruins of Glastonbury Abbey. It is believed that Joseph set up his Church of Christ here. And by 943AD,  Glastonbury Abbey grew to become the second largest and wealthiest monastery in Britain, after Westminster, and part of the pilgrimage circuit. I wander through the Abbot’s Kitchen, a square based building with a hexagonal stone tiled roof that curves up to a smaller pointed spire on top. 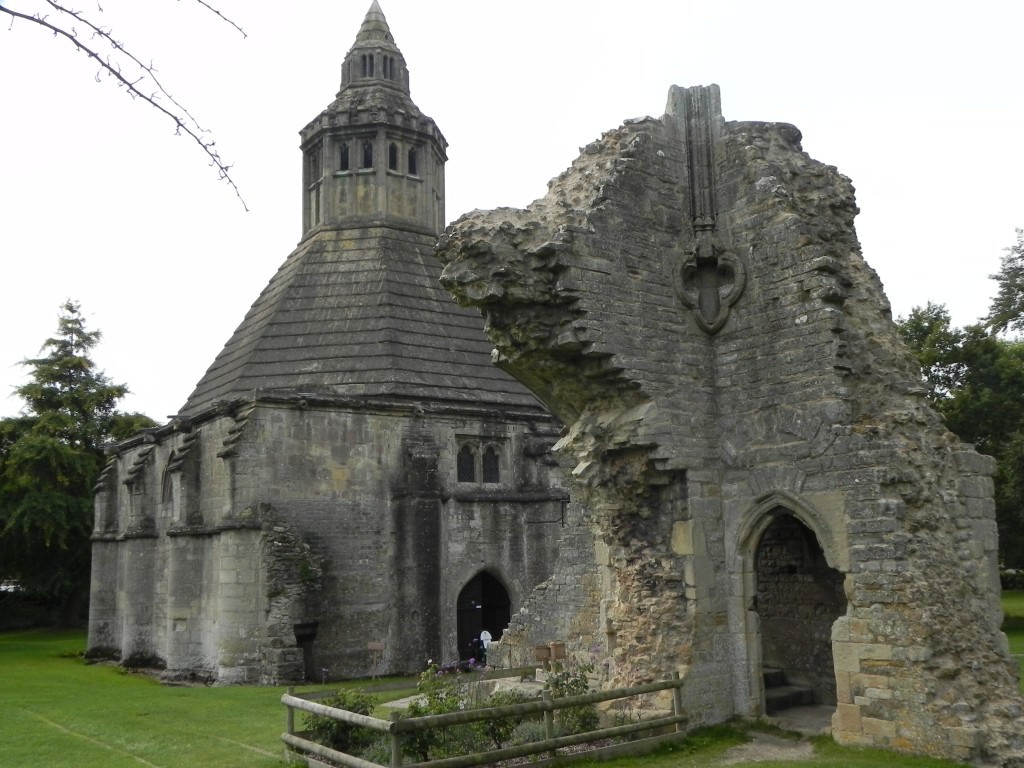 The kitchen building at Glastonbury Abbey

In 1539, Henry VIII dissolved the Catholic monasteries, confiscated their lands and treasures, and established the Church of England. What remains of the Abbey: the Lady Chapel, the Nave of the Great Church, the Choir, and the High Altar, easily gives you an idea of the glory and grandeur of this monastery in its heyday.

A metal sign states that the remains of King Arthur and Queen Guinevere’s were interred in a black marble tomb here, after being exhumed from the Lady Chapel in 1278. I finish my tour of the Abbey, my head swimming with folklore and myth. 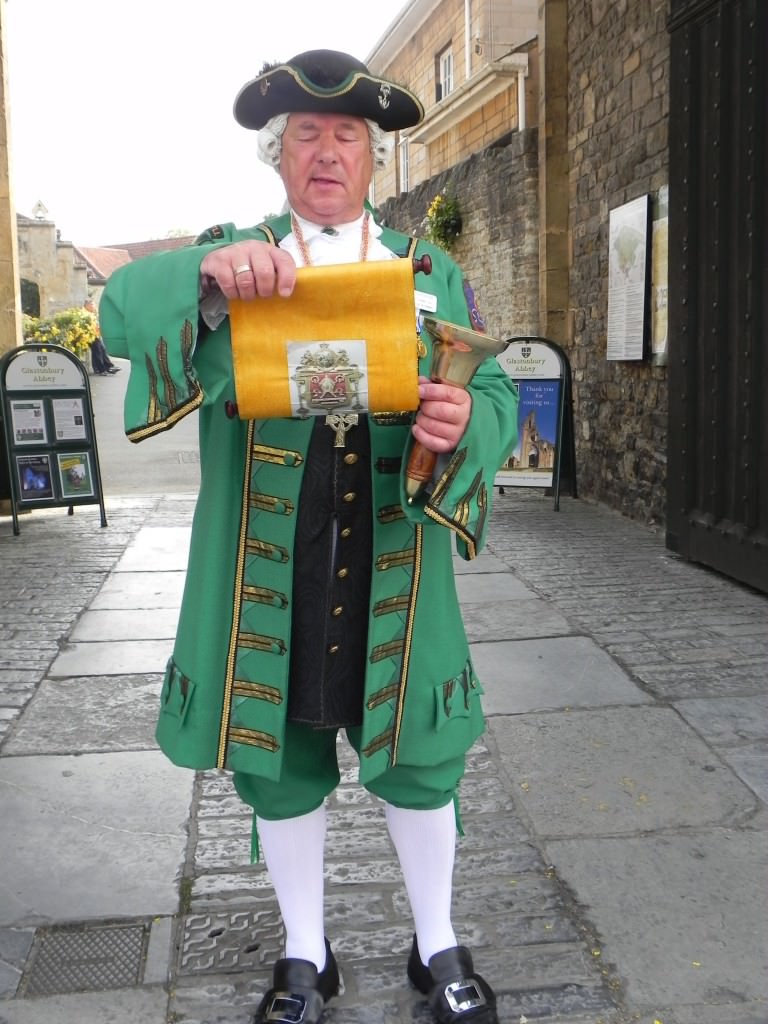 Emerging from the Abbey, the Town Crier, Graham Coles, is ringing a bell to announce some tourist activities that will be happening in Glastonbury today. He unrolls his parchment and starts his proclamation with, “Hear Ye, Hear Ye”. Resplendent in his bright green 18th century robe with gilt edging, white ruffled blouse, green knee length britches, white stockings, gray wig, and three cornered hat, he could be transported back in time to that era and no one would give him a second look.

Graham Coles is steeped in Glastonbury lore. We talk for a while and he insists on escorting me on short tour along Magdalene Street to St. Mary’s Church, Our Lady of Glastonbury, opposite the Abbey grounds. Graham points out the history of this church, almost as ancient as the abbey across the road. 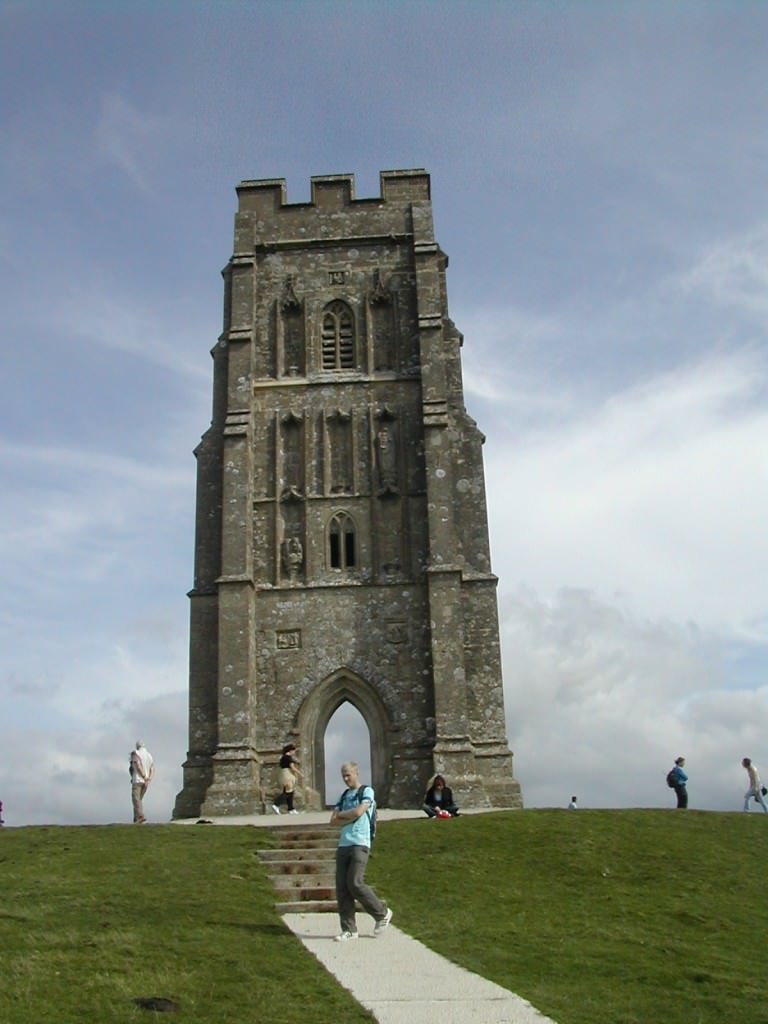 At the top of the Tor

Later, browsing in a New Age bookshop, I ask the shopkeeper what else might account for Glastonbury’s strong metaphysical presence?

She tells me about the town’s earth energy. “The earth energy” she says, “is palpable in Glastonbury—the town lies on two powerful Ley lines, known as the “Michael and Mary” lines”. Perhaps this earth energy draws large numbers of spiritual and new age devotees to Glastonbury. Glastonbury achieved its modern status as the nexus of England’s mysticism and mythology as early as 1900, with the observations of Frederick Bligh Bond, an ecclesiastical architect, who channeled a former monk from the Abbey to direct his excavations. And apparently Bond found many important archeological remnants of the former abbey with the monk’s help. 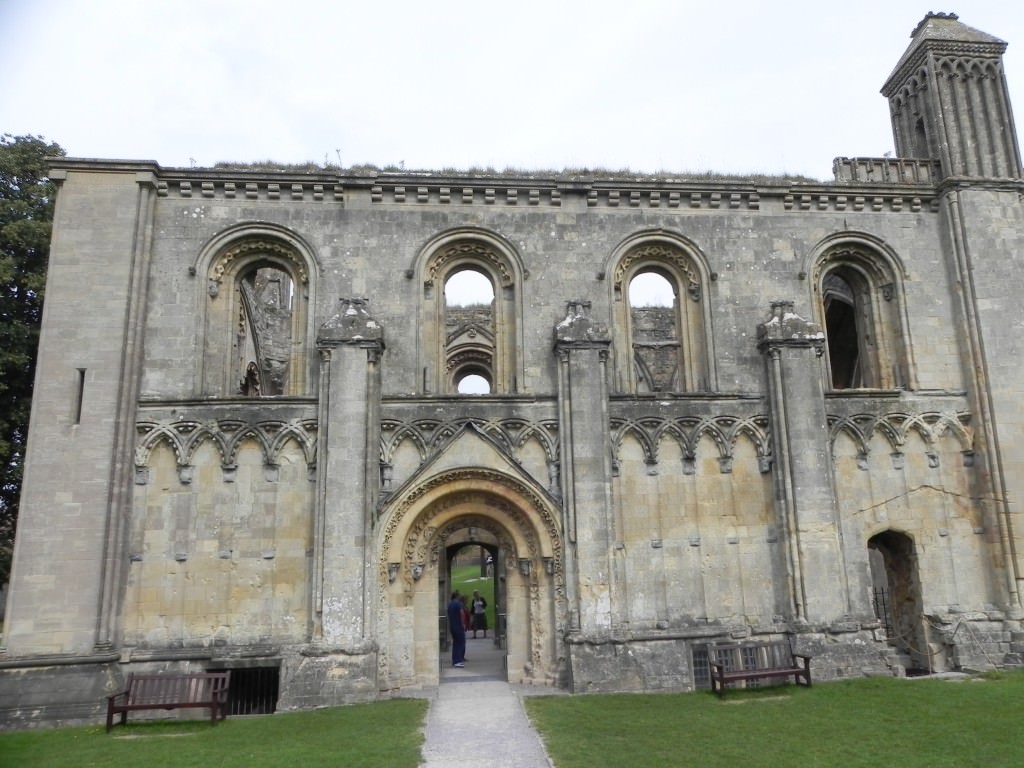 The Ruins of Glastonbury Abbey

The town has attracted an enormous community of mystics and holistic practitioners of all stripes, which certainly makes for some interesting shopping as you walk past new age crystal shops and metaphysical bookshops, up and down High Streets gentle slopes. Little brick alleyways lead into small courtyards lined with New Age shops. Statues of golden Buddhas, metal dragon sculptures, and masks of the Green Man adorn the white painted brick courtyard walls. The local shopkeepers have definitely got into the Glastonbury spirit. Shop names like The Green Man, Lilith, Yin Yang, The Psychic Piglet, The Speaking Tree, The Goddess Temple, Elestial, Man, Myth and Magic, and Stone Age set the tone—you get the idea! There’s no shortage of vegetarian restaurants either. 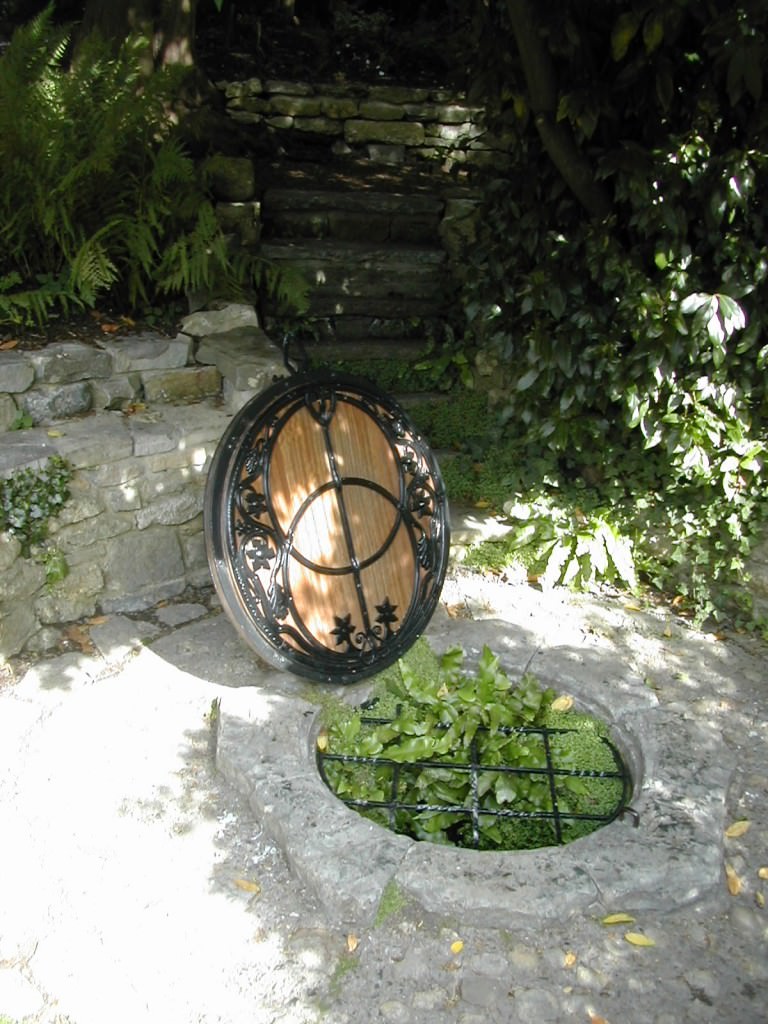 The wellhead at Chalice Wells

Today, Glastonbury is not shy about promoting its historic sites—the town clearly thrives on tourism. But it’s done with class, and is not overbearing. The discernible Glastonbury vibe is one of peace and friendliness; the eclectic mix of New Age tourists, European hippies, and “normal” people appear to go about their business and respect each other’s right to practice their own form of spirituality.

Whether the legends are true or not, Glastonbury is certainly worthy of the title of England’s most spiritual center.

Incredible! I will be visiting this place toward the end of the year. I can't wait!

Thanks for reminding us that Glastonbury "may" be the final resting place of King Arthur as there is no  evidence at all that King Arthur ever existed. As with many of the legends about Glastonbury it does make for a good tale.