This year I made my way to Fasnacht in Basel, Switzerland. I am on a mission. Over the next years, I want to visit and participate in as many carnivals all over the world as I possibly can.  Last year I went to Venice, Italy. What better way of getting a real insight into local culture, in fact into the essence of other peoples’ idiosyncrasies than watching them when they let their hair down. 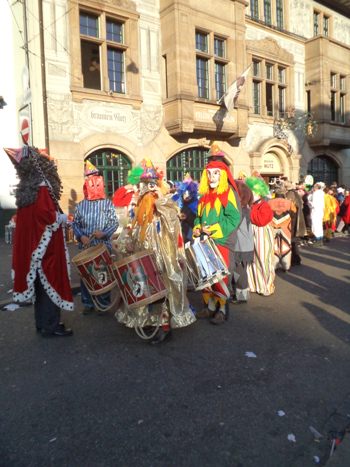 Carnival is a season of gayety, of celebrations, of simply going over the top before Lent brings them all back to earth. And the way people of different cultures go about it couldn’t be more varied. Carnival is called Fasnacht in Basel and, for religious reasons, takes place after Carnival ends everywhere else. Three days dominated by colorful masks, drums and piccolos start with the most impressive event of all, the ‘Morgestraich’.

I had chosen a hotel, strategically located opposite the SBB (Central Train Station) and within a few minutes walk along Elisabethstrasse to the inner city and hub of all major events at Barfüsserplatz. When checking in, I soon found a route map of the cortege pressed into my hand.The parade, which opens Fasnacht, begins at 4am on the dot. Known as the Morgestraich, the various cliques assemble with huge lanterns, their piccolos and drums, and they start the parade from opposite directions. The sound of drums and piccolos will accompany you and all participants throughout the precise 72 hour duration of Carnival. 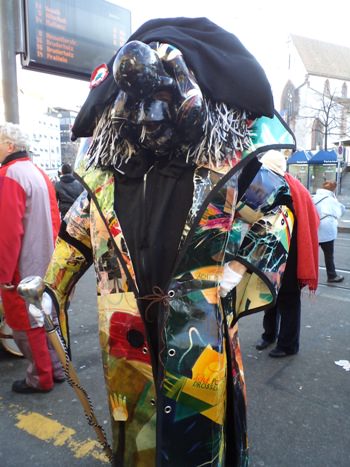 But, the most impressive thing is, that the entire inner city is plunged into darkness whilst the marchers slowly emerge to the melancholic and captivating sounds of their instruments. Spectators, standing five deep along the route, catch their communal breath and a hush descends. I got up at 1am, wrapped up warmly and snagged an observation place on the steps of the theatre which allowed me a spectacular view which reached all the way to Barfüsserplatz and Theaterstrasse.

When dawn arrives several hours later and the two corteges have passed, the lights come back on and the crowds slowly disperse with a single aim: to get warm and fill their stomach. 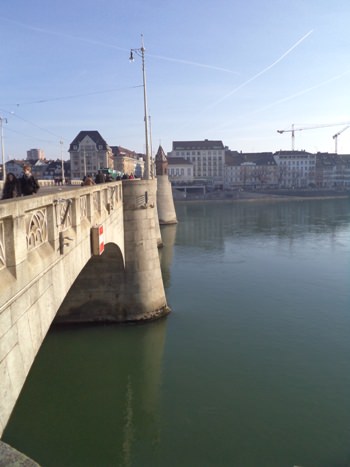 Many shops stay closed during Fasnacht, but countless restaurants thrive in their effort to satisfy early morning appitites. And what better dish to warm up after a few hours on your feet in the bitter cold than a large bowl of hot soup. Basel’s Fasnacht specialty is Mehlsuppe, a thick, hot, dark brown flour soup with melted cheese. I guess the concoction has about 1000 calories per spoonful, but who is counting when the piping hot liquid hits the stomach and spreads much needed warmth.

In my chosen restaurant, I rub shoulders and elbows with fellow spectators as we sit on wooden benches in the quaint ‘Baiz’ as the typical restaurants are called. With their colorful masks and drums resting outside, the members of the cliques enjoy Mehlsuppe, followed by Zwiebelweihe, an onion and cheese quiche, all the while drinking copious amounts of beer and wine.

Münsterplatz, Museums and the Rhine 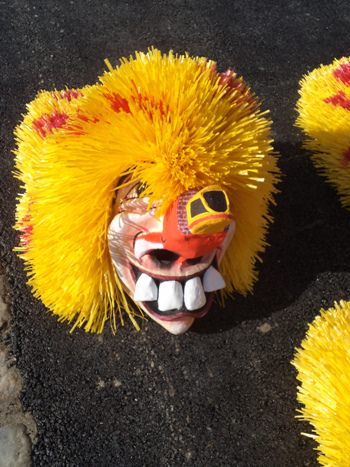 After a few hours sleep in my hotel, I was ready to explore Basel and watch the afternoon parade consisting of floats and revelers decked-out in colorful outfits. As I step outside again, miraculously the tons and tons of confetti dumped upon the streets a few hours earlier have been cleared away. Legend has it, that confetti is actually a Basel invention and it’s thrown at most public events and celebrations. First order of the day is to buy a Fasnacht badge and wear it visibly displayed on my lapel. Without a badge, you are prone to be the recipient of confetti attacks or a whack over the head with a paper club carried by one of the traditional figures, the waggis who are roaming the streets all day long.

In and out of Fasnacht, Basel is a culture and history enthusiast’s paradise. My first destination is a walk across the Mittlere Brücke over the river Rhine which divides  Basel into what’s called ‘Grossbasel’ and ‘Kleinbasel’. Originally built in 1225, the Mittlere Brücke was the first bridge to cross the river Rhine. Standing in the middle of the bridge you have a fabulous view of the two sides of Basel with the spires of the Münster peeking out. 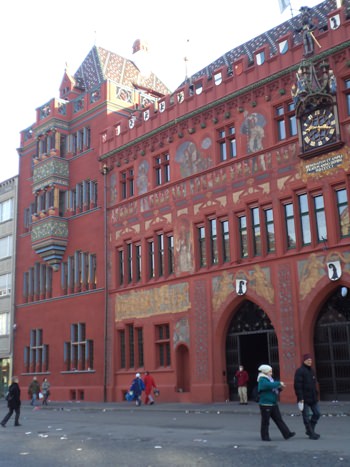 I returned toward the Marktplatz to admire the red Rathaus and then made my way to the Münsterplatz. The Basler Münster was built between 1019 and 1500 in the Romanesque and Gothic style. Originally a Catholic cathedral, this awe inspiring structure subsequently became a Protestant church. Many Baroque buildings surround the Münsterplatz. From the platz, be sure to follow the steps that lead down to a promenade that lies along the banks of the river Rhine. One of the buildings here is occupied by the Basler Puppentheater (also known as Marionettentheater) where exquisite performances can be enjoyed. The beauty of puppet theater is that you can follow the plot even if you don’t speak the language.

No trip to Basel is complete without a visit to the world famous Museum of Fine Art, the world’s oldest collection of art made accessible to the general public. You may also want to visit the extremely amusing Puppenmuseum (Dolls museum). In Basel, all major attractions are within easy walking distance from the Old Town. And it’s just great fun to climb steps and walk through cobble stoned small ‘Gassen’, discovering details on stone facades or browsing in book shops and fashion boutiques.

Stop at Basel’s most famous and oldest confiserie, Brändli and buy Basler Leckeli, ginger bread squares or roasted almonds. All come in beautiful wraps which are in themselves a work of art. 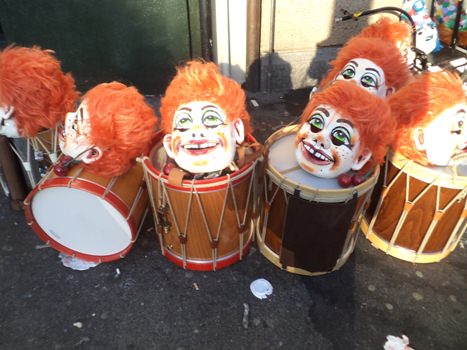 Although the St. Gotthard Hotel was one of the most expensive hotels I stayed in ($250 per night for a single during Fasnacht) it was worth every penny. The hotel is family owned and operated, and it shows in many details. The receptionist couldn’t have been more friendly and helpful. They also provide you with a free pass for all tramway lines which allows you to create your own sightghtseeing tour, simply by riding the various tramway lines from one end to the other. The stop is just a few steps away and so is the railway station and the #50 bus which runs to the airport. Walk  down Elisabeth street and in 10 minutes you are in the center of the old town.

Included in the price is a breakfast buffet of immense proportions and variety, including hot dishes, cheeses, sausages and smoked salmon galore. Not to mention at least five kinds of bread, rolls, and pastries.

The only drawback is the internet. Cable connection, which costs 20 Swiss Francs doesn’t  work at all and the wireless cards they gave me instead, didn’t work either. However, I was assured that a complete renewal of the service was under way, so once that problem is sorted, the hotel will be flawless.

Finally, I’ll let you in on a secret. Some 40 years ago, I attended university in Basel. So, in a way, this trip was a walk down memory lane and, to my pleasant surprise, not all that much had changed. Trust the Swiss and their sense of tradition which I personally find rather reassuring.