Some of the finest, most exquisite pottery in the world comes from the Cappadocia region of Turkey, where artisans have been crafting pots for millennia. Many potters and artists have studios open to visitors, and one of the best is Chez Galip near the village of Avanos. Galip Korukcu, considered one of the top  craftsmen in all of Turkey, looks a lot like Albert Einstein, with his beard and wild hair. Someone has written on the wall behind his pottery wheel, “e=mc2,” which always elicits a chuckle. Master Galip has been making pots of all kinds for 49 years, but to call the objects he makes “pots” doesn’t begin to describe the artistic creations that come from his practiced hands. 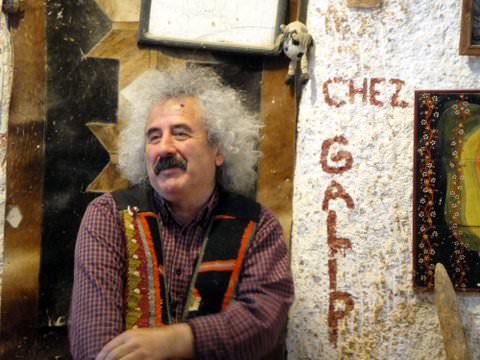 Master Galip in his studio

Our small group sat on a long bench facing him as he pounded his feet to start the wooden wheel spinning and his hands smoothed a lump of the wet clay that spattered his trousers and vest. He looked up with a twinkle and asked, through his assistant and interpreter Saban, who among us could guess what he was making. Someone asked if it was a vase. “Tch,” he scoffed and jerked his head, the Turkish gesture meaning, “Nope.” A bowl? “Tch.” More guesses got the “tch” until a woman said, “A teapot?”  “Bravo!” said Master Galip, and he presented her with a prize, a tiny painted bowl. 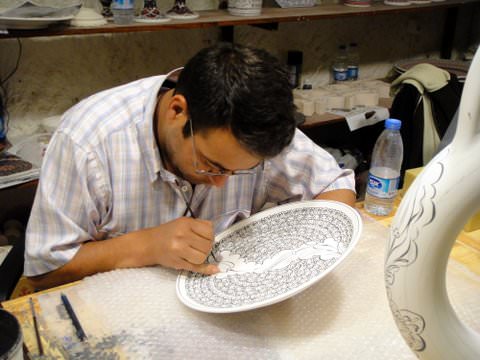 Meticulous design goes into every piece of work

Then he continued to quickly make a teapot with an elegant handle and perfectly fitted lid. Saban poured apple tea or, for those who preferred, wine from a decanter in the shape of an ancient Hittite decanter. 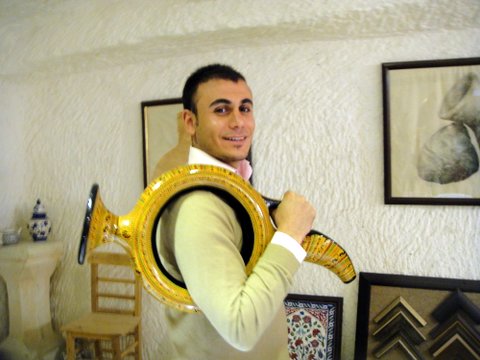 Master Galip learned his craft from his father and is passing it on to apprentices, both men and women, who come from several countries. He was the first, according to Saban, to agree to teach women the complicated work of kneading, shaping on the wheel, creating a piece, resting it, firing, painting, glazing, and firing it again. 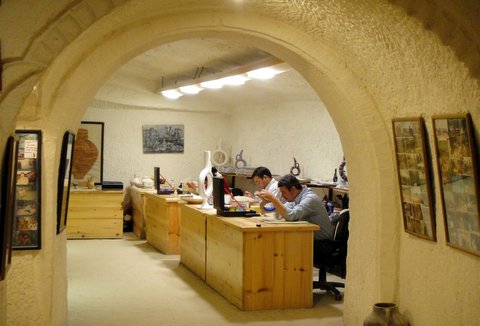 Artists at work in Chez Galip

We watched the artists in their studio drawing and then painting elaborate designs, some in traditional Turkish patterns of roses, carnations, and tulips, others as landscapes or scenes from a sultan’s court. Pots come from the local clay of the Red River (River Kizilirmak), we were told, and plates and dishes from the white clay of the surrounding cliffs. 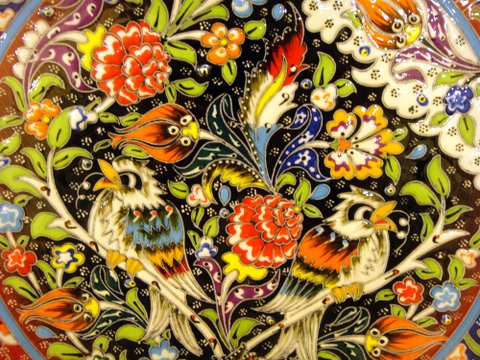 Detail of an elaborately painted plate

Then it was time for the gallery, several large rooms filled with gorgeous ceramics. We bought a plate painted by the master himself—how could we resist after all that charm and enthusiasm?—and some pretty cups as gifts. They all cost more than we wanted to spend and were worth every Turkish lira. A month later, they arrived on our doorstep, nestled in paper and tightly packed in a wooden box. The plate hangs on our green wall, and we remember Chez Galip and smile every time we look at it. 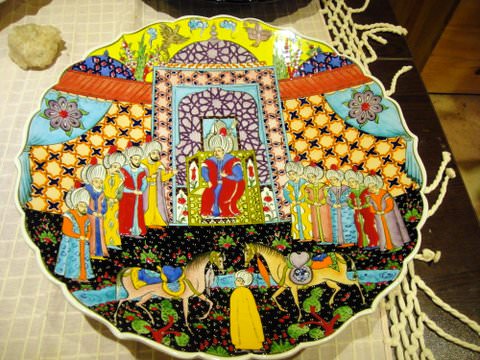