Florence is the heart of Tuscany, but it is also the heart of the Italian Renaissance and one of the artistic capitals of the world. Come to Florence for the sheer beauty of the city and to see the works of the masters – Botticelli, Michelangelo, Donatello and more. 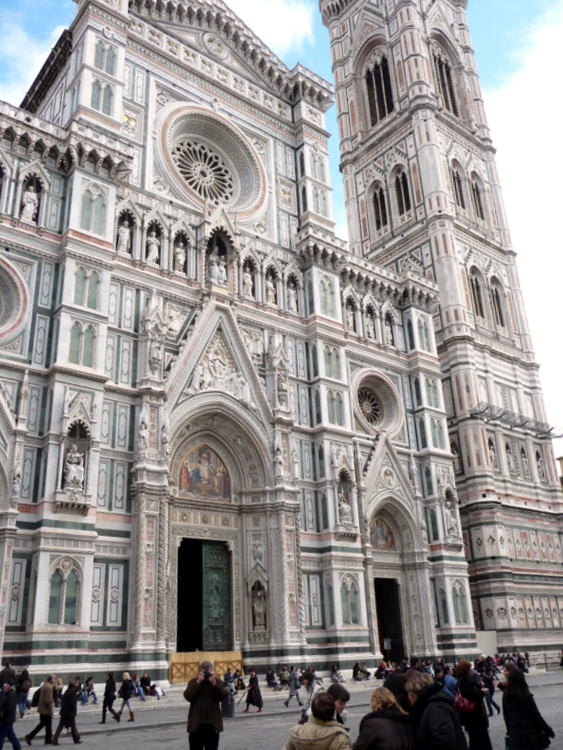 Florence’s tallest building is a richly decorated cathedral and one of Florence’s oldest buildings with bronze doors dating back to the 4th century. The Cathedral was completed in 1463 and is the fourth largest church in the world. The Campanile (bell tower) Bands of pink, green and white marble inlays decorate this 275 ft tower designed by Giotto. Climb the 463 steps to get a birds-eye view of Florence. 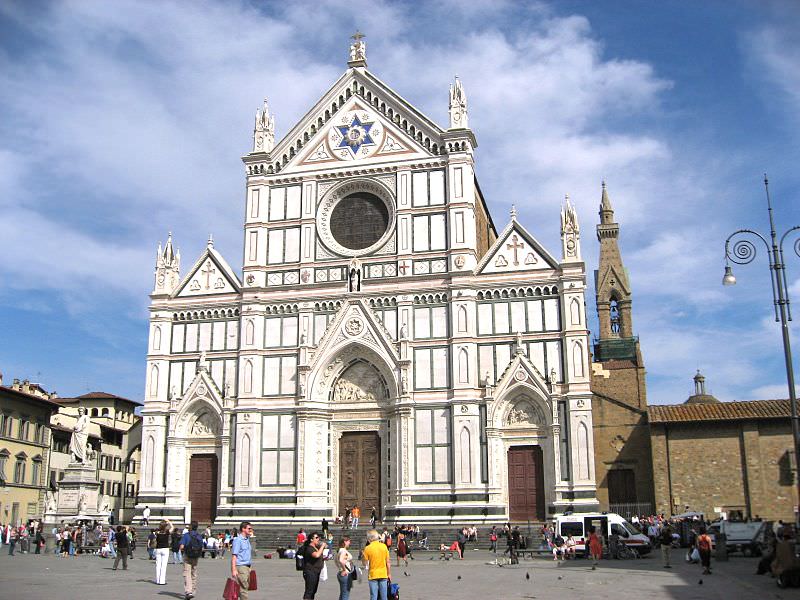 The church of Santa Croce contains the tombs of many famous Florentines, notably Michelangelo and Galileo. It has been likened to Westminster Abby because of all the notable Italians entombed here. 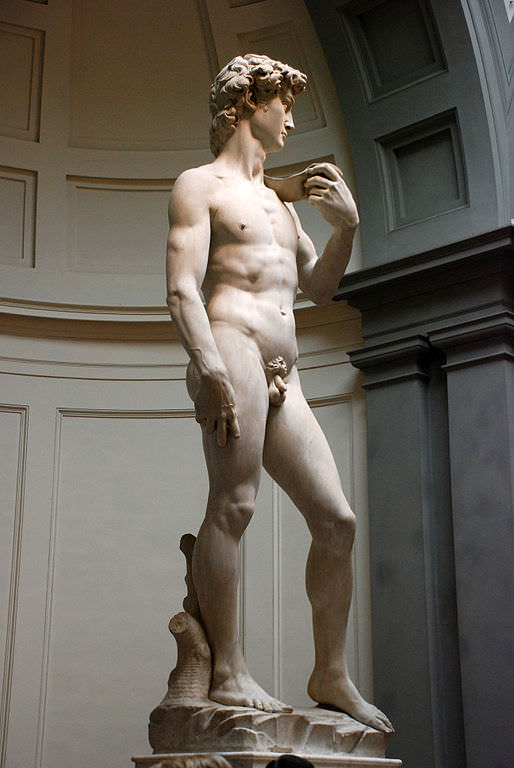 This museum houses one of the most famous artworks in the world, Michelangelo’s David. There are other Michelangelo sculptures and the other holdings are mainly religious paintings by major artists working in and around Florence between the mid-13th and the late 16th centuries.

The Uffizi Gallery
The Uffizi Gallery was built in the 1500s thanks to the wealthy Medici Family. It contains such great works as The Birth of Venus by Botticelli, Bacchus by Caravaggio, the Holy Family by Michelangelo and so much more; it is a must-see.

Home to several museums, this Florence attraction was once built for banker Luca Pitti, a Medici rival, His heirs ran out of money trying to complete the palace. Ironically it was then bought by a Medici, who expanded it further. The palace holds the Galleria Palatina, which displays an impressive collection of 16th and 17th century paintings and murals.; the Appartamenti Reali the royal apartments; Museo Degli Argenti, which displays glassware and other items owned by the Medicis; Galleria d’Arte Moderna, 19th and 20th century Italian paintings; Galleria de Costume, women’s clothing from the 18th and 19th centuries ; and Museo delle Carrozze, a carriage museum. The Boboli Gardens, connected to the Pitti Palace, is a fine example of a Renaissance garden and a welcome place to relax for a few minutes from sightseeing.

We have barely scratched the surface of the attractions to be found in Florence. This city is indeed made for anyone who loves beauty. 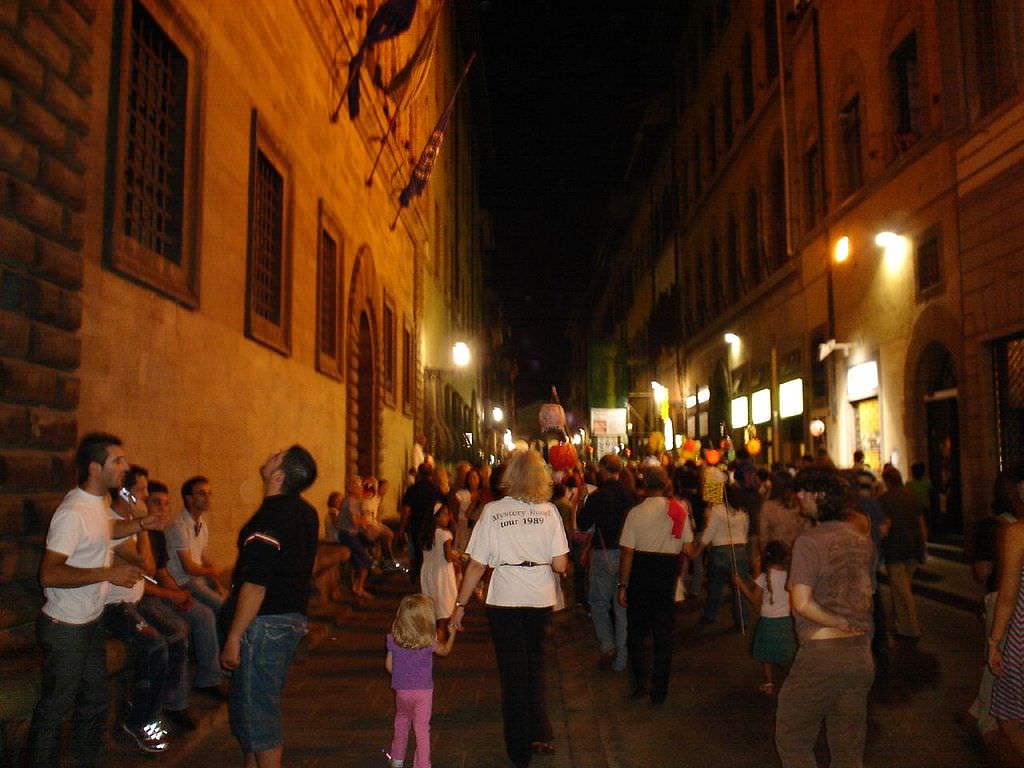 Easter Sunday – The Explosion of the Cart ( scoppio del carro)
From Porta Prato to the Duomo, a cartload of fireworks is pulled by white oxen. The whole cart is set ablaze by a mechanical dove in a spectacular display of lights.

Ascension Day – The Festival of the Cricket (Festa del Grillo)
Dating back to Pagan times, this Florentine tradition takes place in Cascine Park. Vendors sell caged crickets to revelers, who then release them onto the grass. This ritual celebrates the days when men placed a cricket on the doorstep of their lovers to serenade them.

Late June – Costume Football Game (Calcio Storico Fiorentino)
One of Florence’s major events the football (soccer) game is drawn from an ancient Roman ritual. Before the games, a dazzeling historic parade wends its way through the streets of the town. And like Siena and the famous Palio, each of Florence’s historic four quarters sponsors a team.

Early September- Festival of the Lanterns (La Rificolona)
Torchlight procession dating back to the days of religious pilgrimage to celebrate the Virgin’s nativity, with children carrying lanterns all throughout the city.

Mark is correct. Buy tickets in advance. Here is a good link unlees you are working with a travel agent:

I would like to add that the Uffizi Gallery is very popular and can be sold out often even during non high season. So if you are planning on spending only a day in Florence and want to go to the uffizi get your ticket in advance.