I found myself in Graz quite by accident. What was supposed to be a drive-through was transformed into a day trip of sorts. Not being one to pass an opportunity to visit a new city, and given that I was prepared – camera in hand, I decided to see what was on offer. 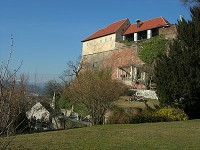 Since I had limited time, I took the easiest option on offer – walking around the Old Town of Graz, a compilation of historic points and a UNESCO World Heritage Site. Between cafe breaks (I didn’t necessarily need a drink or bite but the cafes were so inviting, not stopping wasn’t even an option) and the frequent noting of the city’s visual splendour, I recognized many of the same elements that make Vienna so popular. 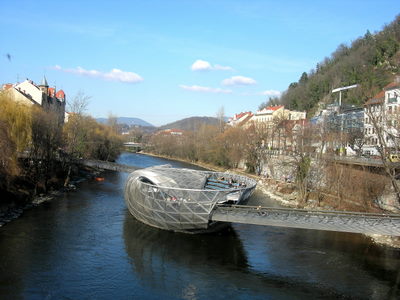 I followed the streets – past exquisite buildings and parks, past street markets and quirky galleries, across the main square, to the River Mur. I was on my way to Mur Island, a strange glass-steel structure, sprawled across the water for yet another cup of coffee when I caught glimpse of the most intriguing local landmark, the Schlossberg. I gave the artificial island a miss and made for the stocky hill instead.
The Schlossberg, translating as ‘Castle Hill’, is situated in the heart of Graz. Its attraction is powered by history and the pursuit of its serene gardens. 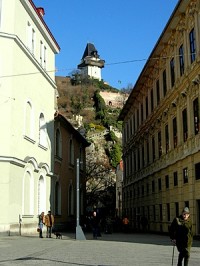 The journey up the hill is an adventure in itself as the trek is peppered with a number of natural accents. Other options to the top include the funicular, and a glass elevator that hurls you through the insides of the hill. I took this option. The ride on the lift costs a few Euros, but it is quick (a great option if you are short on time) and exciting, as it shoots you past rocks towards the sunlight. A tunnel system was dug out during the Second World War to protect the citizens of Graz from air-raids. Today, after some state-of-the-art-refurbishment, the system of tunnels has been converted into an exhibition and events venue, better known as Dom im Berg or Cave Cathedral. Also navigating these tunnels, is a kiddie railway that choo-choos along with ecstatic little kids and their parents.

From the top, Schlossberg offers some of the best views of the city – red-tile rooftops, church spirals and the River Mur. On the hill, the remains of a fortress still dominate the scene. Given Schlossberg’s strategic location, it developed into a fortification very early in history and was the city’s main defence against the attacking 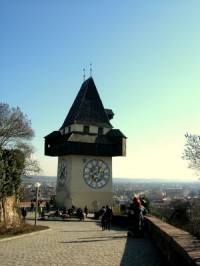 Hungarians and Turks. The fortification was further reinforced during the French siege. Their departure, however, led to the dismantling of the fortress. Today the ruins simply provide an interesting backdrop to the many landscaped gardens to be found here. In addition, the old cellars now function as an open-air performance arena.

The Schlossberg’s most iconic monument, however, stands quietly in a corner overlooking the city. The old Clock Tower (Uhrturm) has been a part of the Graz landscape for over three centuries. So loved is this monument that when Napoleon’s troops threatened to destroy the Clock Tower on their way out of the city, the locals paid almost 3000 guilders to ensure it was unharmed. Its fairy tale charm only helps endear it to those who visit the hill; every tourist poses for a picture with the big clock, and I did too. 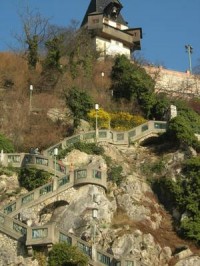 Close to the clock tower is a lovely little cafe (there are more, but this is the one I selected) where I ordered a cup of coffee and an Austrian pastry; the combination goes down really well with the splended, sweeping view of Graz.

As the day grew on, it was time to leave. I figured since I took the easy way up, it was only right to walk down. I took the Kriegssteig route, a stone staircase running down the edge of the hill. This really was the perfect way to end the trip, as the staircase swerved past more beautiful gardens and sculptures while offering additional opportunities to capture some beautiful pictures of Graz.

@ Darlene, Jessiev: Thank you for reading and for the lovely comments!

I absolutely luv reading ur tweets and viewing ur sites and info..I feel as tho u transform me 2 places i will never b able to visit..U r so lucky 2 b able 2 travel like u do. Thanks and keep twittering, please.Keep safe and God speed...