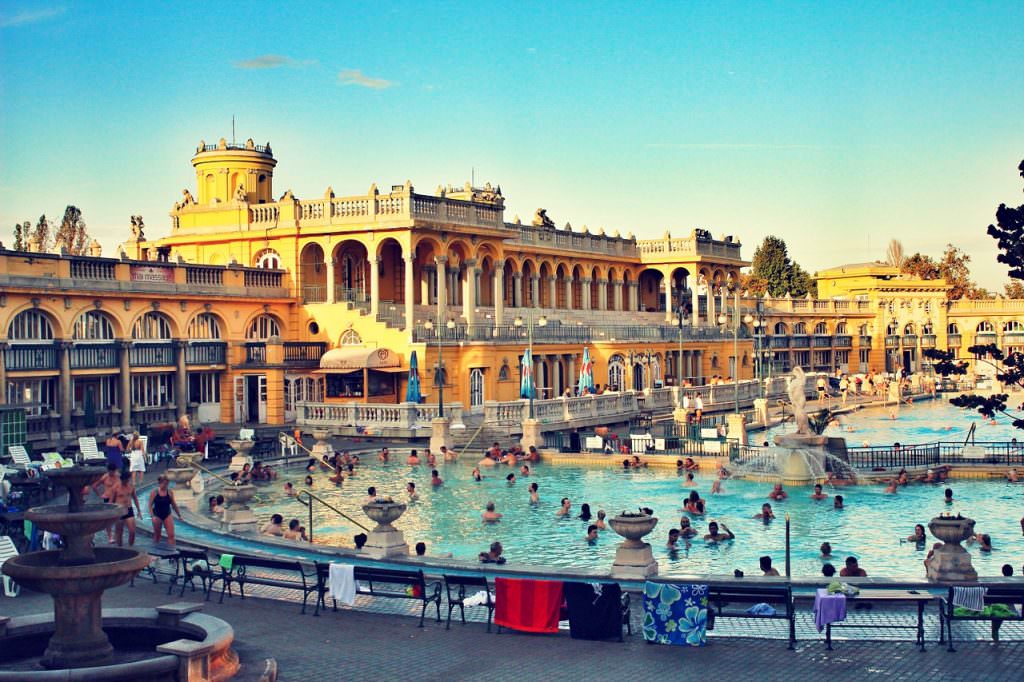 Europeans are nothing if not total hedonists. They love good food, good wine, and at the end of the day, they love a good spa. From Iceland to Estonia, spas getaways, whether in their own city or in a different country, are an integral part of life and often one of a city’s major tourist attractions. But these aren’t new-age, luxury spas where you have chocolate massages and drink matcha tea. The Spas in Europe are hot and sweaty, in centuries-old buildings, where you might beat yourself with a birch stick, or have someone else do it for you. You leave rejuvenated, and feeling that you’ve taken part in something special.

The following spas in Europe offer not only a treat for your body and soul, but also a quintessential glimpse into a culture. After all, what better way to get to know a place than to be naked beside its locals?

The Blue Lagoon – Iceland
Even though the whole country recently declared bankruptcy, Iceland is richer in natural wonders than most other countries, and the Blue Lagoon is its most spectacular sight. This geothermal spa is rich in minerals and the water is so milky blue that it completely hides the black volcanic rock underneath. You can spend hours floating, scooping handfuls of silica mud out of the boxes around the pool and spreading it on your body. Lying on the warm water surface, your breath coming out in puffs in the cold air, you’re guaranteed to have one of those “How did I get here?” moments.

Hotel Kakslauttanen – Lapland, Finland
The sauna is an essential part of life in Finland. There are five million people in Finland, and two million saunas. When you’re invited to a Finnish sauna, you should leave at the door all clothes, swear words, honorifics or titles, and controversial topics, because the sauna is where everyone comes to cleanse the soul as well as the body. Sauna connoisseurs will say that the traditional smoke sauna, made without a chimney so that the smoke fills the entire room, is far superior to a regular sauna. For the quintessential smoke sauna experience, head to the Hotel Kakslauttanen, the world’s largest public smoke sauna overlooking an igloo village. Have a seat, keep an eye out for Santa, and indulge in pure Finnish culture.

Szechenyi Thermal Baths – Budapest, Hungary
Budapest has officially been known as the “City of Spas” since the 1920s, but the Romans also enjoyed the thermal springs in the city center and some of their baths are still in use today. There are many options around town, but one of the biggest and best is the Szechenyi Bath complex, located in a grand building with ten indoor and three large outdoor pools. There are saunas to sit in, whirlpools to play in, and warm baths where you can relax and try not to stare at the naked old men around you. Read more on Budapest’s Thermal baths and what to do in Budapest.

Kalma Saun – Tallinn, Estonia
Estonians, like their Finnish neighbours, have a deep love for their saunas. They’re good for the heart, good for the skin, and a great place to socialize. Any private house is bound to have a sauna inside, and if not, there are public ones available, such as Kalma Saun, Tallinn’s oldest sauna dating from 1926. Spend an enlightening few hours at Kalma Saun, hopping from cold shower to colder pool and back into the hot sauna, while watching women beat themselves silly with birch sticks.

Detox International Retreats – Spain
If you find you’ve overindulged a little too much over the holidays, or any other time of year, what better way to refresh than to get all toxins out of your system at once. Held twice a month at two locations in Spain – one in the Alpujarra Mountains in southern Spain, the other a half hour from Malaga in a tropical garden near the sea – these 7-day Detox International retreats offer holistic approaches to cleansing your body and soul. The program consists of all clients adopting a juice and broth diet, performing yoga in the morning and meditation in the evening, listening to speeches on topics such as the downside of chemicals, and, of course, enemas. You’ll have lots of free time to explore the grounds, take a hike or read a book, and enjoy some alone-time, before heading back to detox boot-camp.

Varazdinske Toplice – Croatia
If you venture away from the Croatian coast, you’ll be rewarded when you stumble upon a spa town. The interior of the country is full of these little places, such as Varazdinske Toplice, where the site of the thermal spa dates back to Ancient Roman times, and you’re almost sure to be the only foreigner there. The pools, fed by thermal springs full of therapeutic minerals, are found inside the Minerva Hotel, along with other spa facilities such as gyms and massages. This spa is not fancy, but the water is warm, the scenery gorgeous, and finding your way there in the first place is a treat in itself.

Cagaloglu Hamami– Istanbul, Turkey
While you can find a Turkish bath in many major cities, nothing beats experiencing a real hammam in Istanbul. The oldest and grandest spa is the Cagaloglu Hamami, where you’ll bathe under an Ottoman marble dome built by Sultan Mehmet I over 350 years ago. It’s just you and your attendant in a warm room, and your relationship ranges from relaxing to near-dominatrix style as she washes you, massages you, and scrubs you with a coarse mitt to remove more layers of dead skin than you ever knew you had. A scrub and massage usually takes over an hour, but you can linger for long as you like, drinking tea and enjoying the heat.

You can also Take in the Waters in Baden Baden, Germany

Don’t forget to pack these things when you go explore the Spas in Europe:

Spas in Europe – Pin for Later:

you might remember that the sauna baths in Finland and Estonia expect all women and men not to wear a thread while taking part, And mind you there are more and more saunas where both sexes sweat it out side by side in the sauna and stark naked of course.

A seriously underrated way to experience Europe! My favorite is the Friedrichsbad in Baden-Baden, Germany. Not only is the facility Belle Epoque gorgeous, but the hours-long bathing ritual - including steam, pools, and massage - has got to be the most elaborate and most affordable spa experience in Europe. My most-viewed post is on this very subject, and though I once suspected it was due to the word "nude" in the title, I think people around the world are opening up to a ritual that Europeans have appreciated for centuries.