Germany is a beautiful country with a diverse landscape and an intriguingly historic past. Since the fall of the Berlin wall, the reunification of the country has energized its citizens and provided the impetus for growth and an increased focus on tourism. Germany’s climate is mostly temperate. Extreme temperature lows and highs are rare. Winter temperatures vary from west to east, with around freezing temperatures in the west and well below freezing in the east of Germany. Summer temperatures are typically between 20°C and 30°C, with more rainfall during the summer months. So, you can see that anytime is a great time to visit this dynamic country.

The varied landscape of northern Germany makes it a popular destination for visitors. Characterized by windmill-dotted flatlands, the serene coastline along the Baltic Sea, and the rugged coast of the North Sea, Northern

Germany offers an array of activities for visitors Wind surfing, sunbathing, hiking, museum hopping, castle viewing and shopping are just a few of the possibilities. From the resorts of the Baltic coast to the spirited cultural hub of Hamburg, the north offers a diverse array of attractions. Located on the northern coast of Germany, Flensburg is a port city renowned for its hearty cuisine and charming old town. Hanover is a lovely city where you can enjoy nature and culture.The Herrenhausen Gardens is Hanover’s summer playground and the Marienburg Castle, just south of the city is the ancestral seat of the Hanover princes. The climate around the Baltic and the North Coast is fairly reliable and with little variation. In contrast to inner Germany, the difference between seasons is less distinct. However, winters can be severe with cutting winds and freezing temperatures. Summers are warm and pleasant. Rain showers are frequent but do not last too long: the sunshine index is high, and the amount of rainfall guarantees a green and fertile landscape.
Some of the most dramatic scenery in Germany can be found in the south. This region is home to the legendary Black Forest, the Rhine River, the Alps, Bavarian lakes, and the historic urban center, Munich. Munich’s Marienplatz and its beer gardens are known world-wide. For the active traveler, southern Germany offers hiking, biking, snowshoeing, skiing, canoing, snowboarding, rafting, fishing, and para sailing. The Black Forest region is world famous for its culinary repertoire and, of course, its beer. Stuttgart is the home of Mercedes Benz, castles and mineral spas. The south is particularly famous for its warm foehn winds, which are notoriously blamed for everything from headaches to uncalled-for political changes. These warm-blowing winds mostly occur in autumn and spring and often account for dramatic temperature fluctuations. 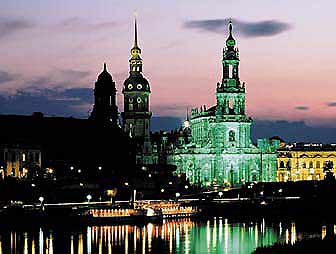 Eastern Germany is a bustle of activity, from the revamp of central Berlin to the addition of five new federal states. As visitors continue to pour into the region, it is transforming itself to meet the ensuing demands. From the beautiful lake region of Mecklenburg, to the UNESCO world heritage site of Dresden, visitors will be impressed and warmly welcomed. From Leipzig and Dresden to Stuttgart the summers are warm with frequent rainshowers. Winters are generally cold. The amount of snowfall and average temperatures are generally influenced by altitude rather than by various climatic regions. The weather is continental in the sense that it varies from year to year, meaning a chilly spring and rainy summers one year can be followed by spectaculary warm and sunny the next year.

Western Germany holds a surprising integration of industry and romantic history. Fairy tale castles dot the landscape along the Rhine as it meanders down toward the nation’s largest industrial region, the Ruhrgebiet. Frankfurt is a progressive metropolis and the hub of western Germany. The elegance of Dusseldorf and the regal cathedrals of Koln (Cologne) offer the traveler ample opportunities for cultural pleasures. With its lush and mysterious forests, its majestic river, and humming urban centers, western Germany offers something for everyone.

We love the charm and majesty of this country. You will too: come and see for yourself!