Sad to say goodbye to the inspiring people of Piran, I jumped in a rental car and drove north along the Italian-Slovenian border to Slovenia’s Goriska Brda wine region. As I approached the tumbling wine region, I saw people harvesting fruit in an orchard and I stopped. Tanya Krstov and her family were picking persimmons to sell to the local markets. “Did you know that Hemingway fought here,” she asked, pointing to a nearby hill. What a revelation! I did a little research and discovered that Ernest Hemingway was deployed to the Italian town of Schio, 150 miles away. During WWII, the front line ran through much of Slovenia (mass graves attest to the fact), and it’s quite plausible that Hemingway did indeed fight on the hill she pointed to. 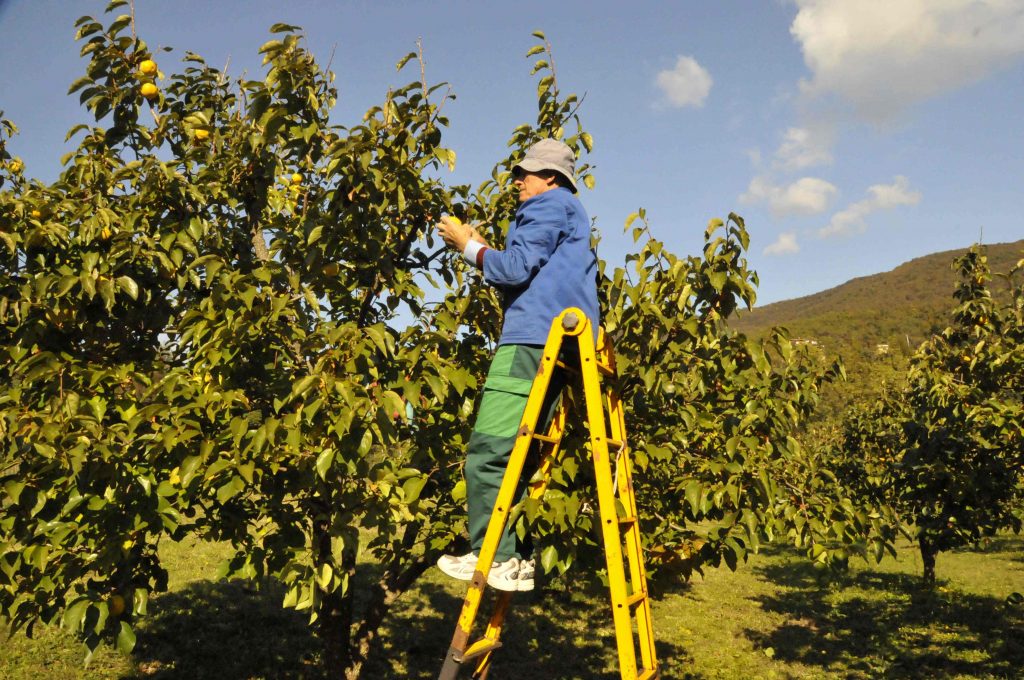 With scenes from Hemingway’s books running through my mind, I drove into Goriska Brda, which borders the Friuli region of Italy. The vineyard foliage was at its peak, and the snowy Alps shone to the north.

Goriska Brda is making major news these days because of it’s innovative winemakers and its ancient method of aging wine in qveri, or subterranean amphorae. However, it’s still relatively unknown to travelers. Few wineries employ full-time tasting room staff, but if someone’s home, you’ll get to taste wine. Some wineries charge, some do not. White wines made with rebula and pinot grigio (sivi pinot) grapes have made the region famous, but I really liked the reds, too, which featured the pinot noir, merlot, and cabernet sauvignon grapes. As I drove through the region, I kept passing into Italy by accident (I’m glad the border is no longer controlled) and I had a hard time knowing where exactly I was. Was this Italy, or was this Slovenia? 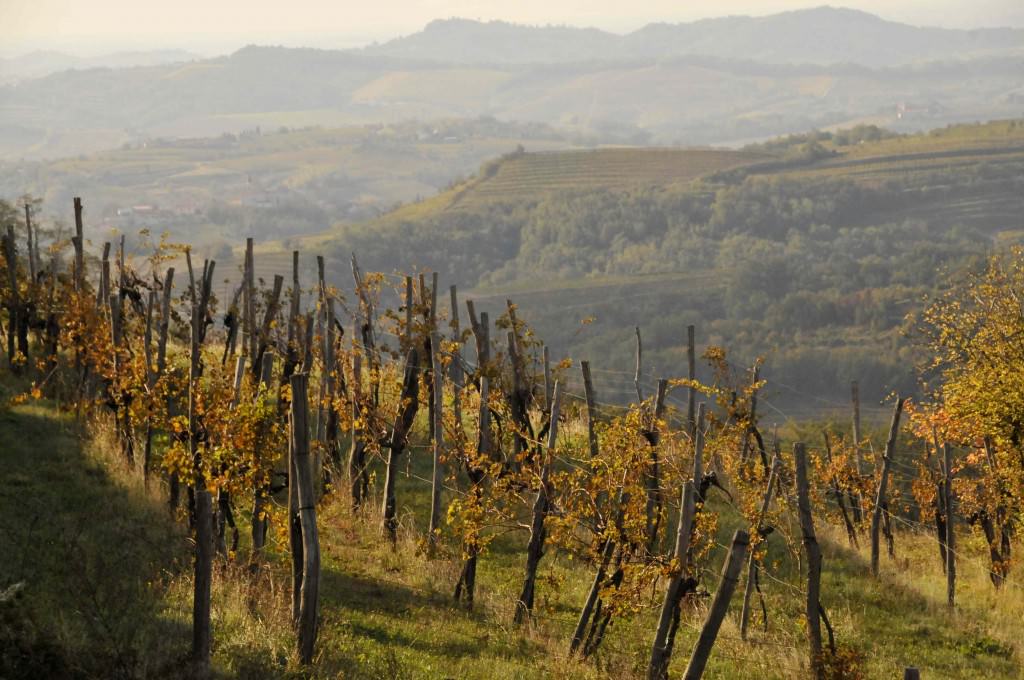 “This region has changed hands five times in the past 150 years,” explained Tomaz Scurek, winemaker at Scurek winery. “The final border was determined by individual partisan groups.“ We stood in his tasting room overlooking a steep vineyard, and he pointed from vineyard to vineyard, identifying which of his neighbors owned Italian land.

Scurek winery makes 20 unique wines, 12 of which are white. I really enjoyed the 2008 Stara Brajda Belo, made from 60% rebula and 40% other regional white grapes; I smelled tropical fruit and flowers and tasted peach and almond.

When I asked which traditional Slovenian foods inspired pairings with these wines, Tomaz suggested staqis, a sort of fish-gut soup. Telling of the region’s impoverished past, this goulash-like soup is made using whatever pieces of fish are around, with the addition of sour cream and tomato, and served with buckwheat polenta. The Adriatic Sea is just a 40-minute drive away, but, in the past, most of the best fish was sold before it made it to the region. 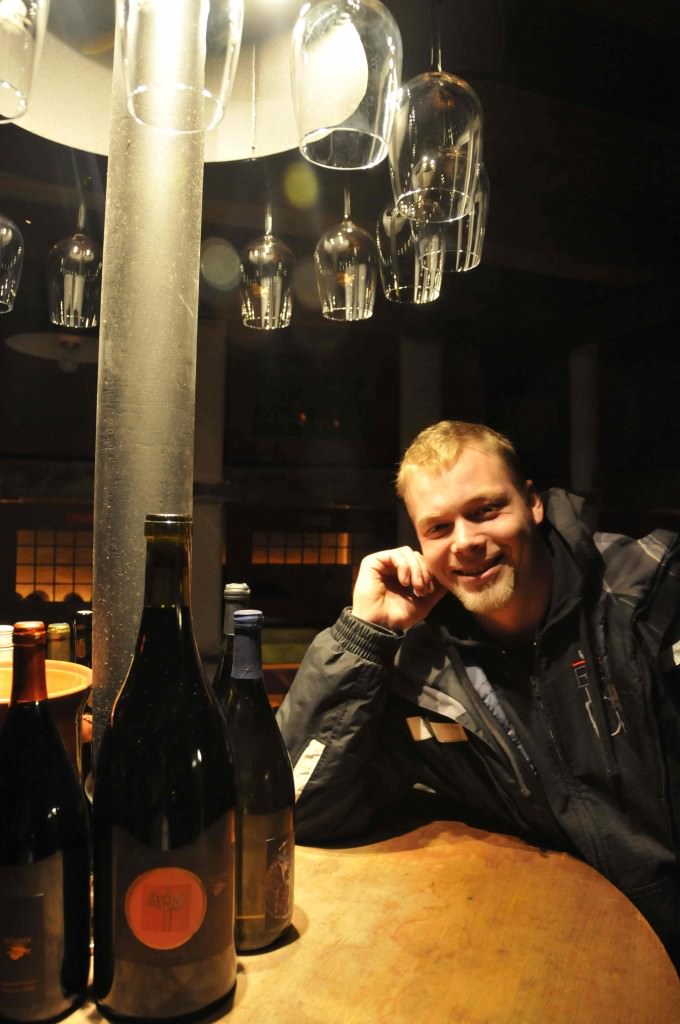 Today, local fare focuses on goose, venison, beef, and ham. Pasta is very common, and I particularly enjoyed the squash-gnocchi with sage-butter sauce that I had at Belica Restaurant. Hard cow’s milk cheeses, such as Tomlin sir, and cured meats, particularly the smoked prosciutto, karst prsut, are also specialties of the region. Traditional dishes to look out for include the local minestrone soup and jota, a turnip or sauerkraut soup with beans and potatoes. For dessert, don’t miss orehoui struklji, a warm, hazelnut-centric, cinnamon-bun-like strudel served with whipped cream.

On my last day in Slovenia I drove to the town of Divaca, home to the Skocjan Caves and the largest underground canyon in Europe. I’d been at a party at Movia winery until 4am the night before, and I was a little woozy as I followed our tour guide several hundred feet below the earth’s surface. Underground, the sight had to be seen to be believed: The Reka River had carved a massive canyon, and a bridge had been built 246 feet above the roaring river; I felt as though I were in Lord of the Rings for a moment. It was like seeing the Grand Canyon underground.

Belica  – $$$
The dining room has a rustic atmosphere, and there’s a table of ten or more complimentary, house-made liqueurs, promoting a jovial mood. I recommend the set menus, which run between 25-30 euros for a large four-course meal. The dishes change with the season, and I was served smoked, cured goose breast over an arugula salad for an appetizer, followed by a light squash-gnocchi with sage-butter sauce, and then a perfectly rare venison steak with shaved Parmesan. For dessert, don’t miss the orehoui struklji. The wine by the glass, which is a good accompaniment but nothing more, is shockingly cheap. Medana 32, Medana

Bjana Winery
Bianca Winery specializes in fine sparkling wines made with native grapes. The tasting room comes with an astonishing view of the valley with the Alps, and the tasting comes with artisan cheeses that are so local they cannot be purchased in stores. The winery offers overnight accommodations.
Email for an appointment: bjana@siol.netTasting
Fee: Wine with cheese 12€.
Biljana 38, Biljana 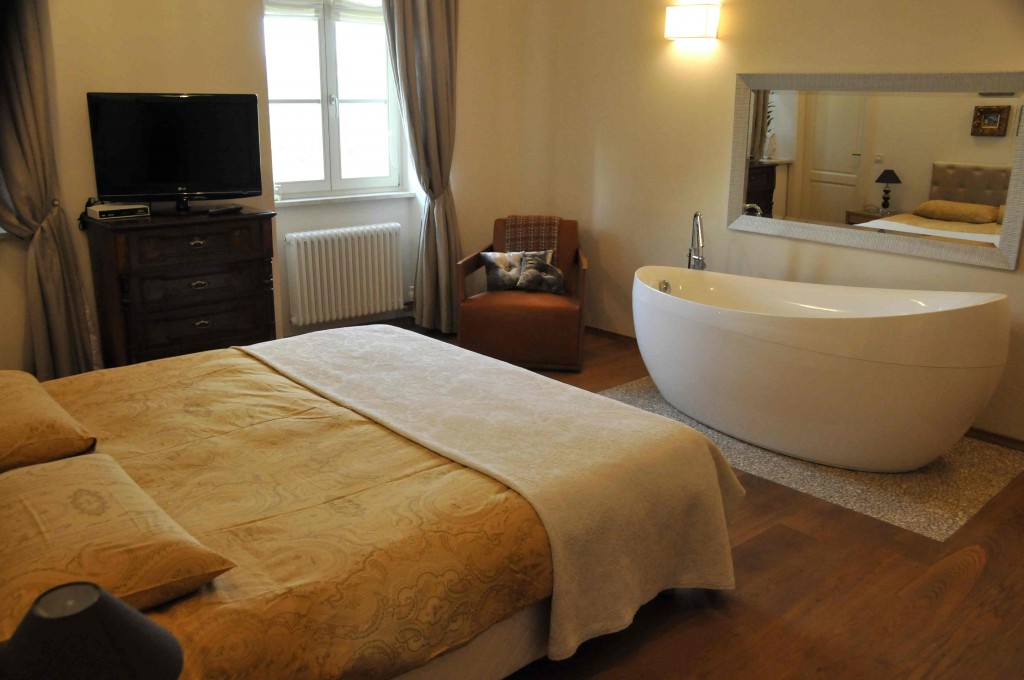 B & B at Bjana Winery

Scurek Winery
This winery rings with artistic creativity, from the painted wine barrels in the cellar all the way to the wines. I could see the grapes’ reflection in the white wines, each tasting clean and highly unique. The Pinot Noirs are extremely elegant. The winery offers overnight accommodations.
Email for an appointment: scurek.stojan@siol.net
Tasting Fee: Wine 7€. Wine with cheese 10€. Wine with cheese and salami 15€
Plesivo 44, Medana

Hi, I just came accross your blog post about Goriska brda region. Great article. Welcome back anytime to Brda region and attend a hike through the vineyards. Vesna

I haven't made it to the nw part of the country, but I've heard only great things. I was really astounded by the Goriska Brda region. One of the most beautiful wine countries I've ever seen, and it's all about aged white wine. Thanks for reading!

I just got back from a tour of northwest wine country...it was amazing. I love learning and trying new wines. I'll definately save up my miles for a trip to Slovenia’s Goriska Brda Wine Region. Thanks!