With so many historic structures that have been beautifully restored and reconstructed in Dresden, Germany, it is hard to divide time equally among them. But one site – The Dresdener Zwinger – deserves more recognition. The Frauenkirche may be the symbol of the city, but the Zwinger, a Baroque palace 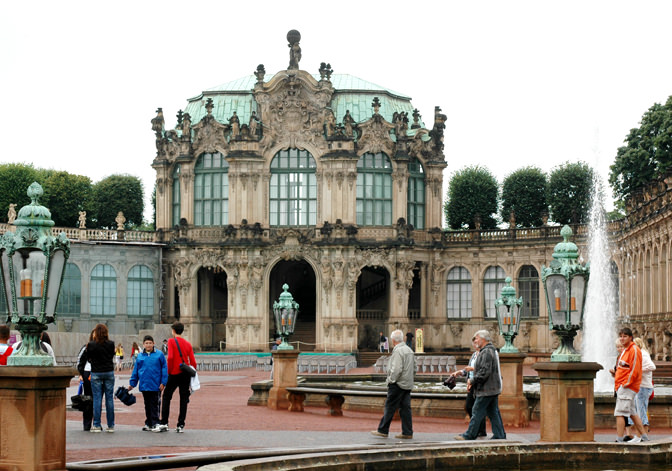 situated right in the middle of Dresden’s Altstadt, is truly impressive. The palace, home to many electors of Saxony, succumbed to significant damage during many wars, including the Seven Year’s War and the Napoleonic Wars, but it was nearly completely destroyed during World War II. It has now been carefully reconstructed and stands as a wonderful example of German Baroque architecture.

In 1689, Augustus the Strong, who is perhaps best known to tourists in his immortal form as the Goldener Reiter statue in Dresden’s Neustadt, desired the construction of a spectacular palace. He was influenced, no doubt, by a recent trip to Versailles. The Saxon elector and king of Poland commissioned court architect Matthäus Daniel Pöppelmann to build this new residence. Pöppelmann’s designs were implemented in stages and the palace was constructed between 1710 and 1728. Sculptor Balthasar Permoser, collaborating with Pöppelmann, created numerous Baroque sculptural elements for the palace, most famously the Nymphenbad fountain. 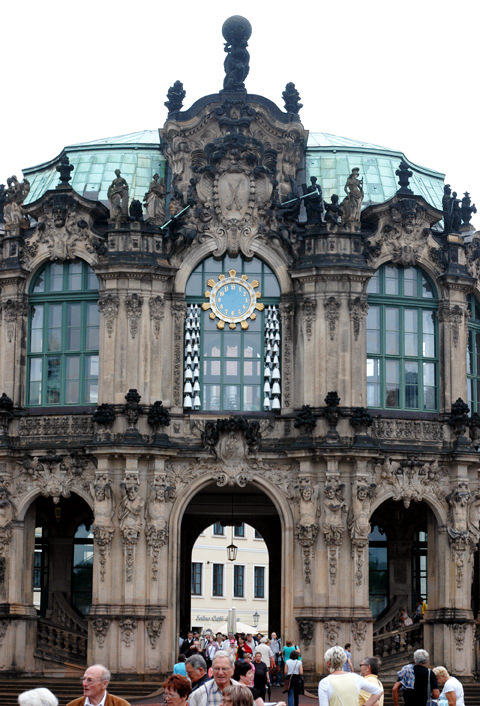 Though incomplete, the Zwinger was formally inaugurated in 1719 to host the wedding festivities of Augustus’ son Frederick August to Maria Josepha, daughter of the Habsburg emperor Joseph I. The interiors of the palace were completed in 1728 and since that date it has held the most important and valuable art collections in Dresden. Further construction of the Zwinger ceased in 1733 due to the death of Augustus. The palace grounds were thus left open to the Elbe River. The courtyard pond and garden were later additions, built between 1820 and 1830. In 1855 Gottfried Semper completed the construction of a gallery wing which closed the courtyard to the river. Semper was also responsible for the design of the city opera house.

The Zwinger was greatly damaged during the Allied bombing of Dresden in February 1945. Fortunately, the valuable palatial art collection was evacuated before the destruction of the building. Following World War II, the ruins of the Zwinger were at risk of being leveled in favor of new construction under the Communist occupation of East Germany. Dresden citizens, however, voted to restore the palace to its former glory. Under the direction of Hubert Ermisch, Arthur Frenzel and Max Zimmermann, reconstruction of the Zwinger began almost immediately following the war. It was completed in 1963, though a decade earlier the first exhibition room had been reopened to the public.

Today, the Zwinger and accompanying palace gardens are free and open to the public. Several significant museums are housed in the palace’s Semper 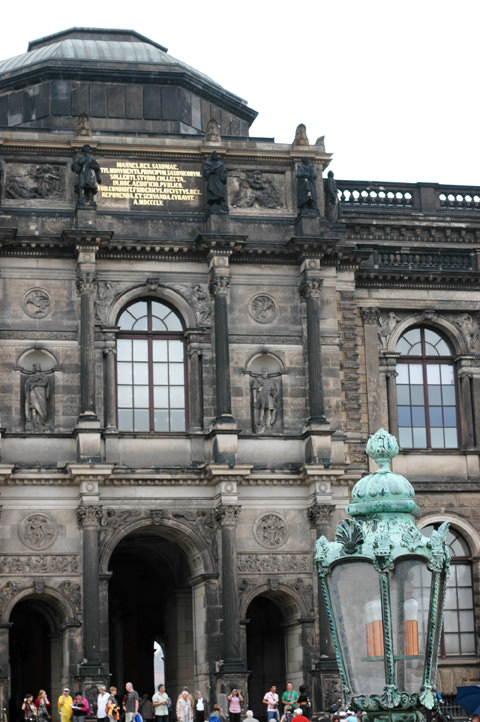 Building, including: the Alte Meister Picture gallery, with artwork from some of the world’s master painters; the Türckische Cammer, housing the most important Ottoman art collection outside of Turkey; the Porzellansammlung, one of the largest porcelain collections in the world; and the Rüstkammer or armory, with displays of weapons, jousting equipment and other courtly artifacts. All exhibition halls are open daily except Mondays, 10:00 a.m. to 6:00 p.m. Entrance fees are charged to all of the exhibitions.

A popular site at the Zwinger is the porcelain glockenspiel, which chimes every fifteen minutes. The melody of the chimes changes every season, playing the respective season from Vivaldi’s “Four Seasons,” as well as compositions by Bach, Wagner, Mozart and Weber.

The Zwinger courtyard is open daily from 6:00 a.m. to 10:00 p.m. Be sure to budget sufficient time to fully explore all aspects of this well preserved historic sight.

Written By and Photos by Morgen Young for EuropeUpClose.com

[…] visited the Zwinger, a must-see in Dresden for its ornate architecture and formal gardens. And then took a 90 minute […]