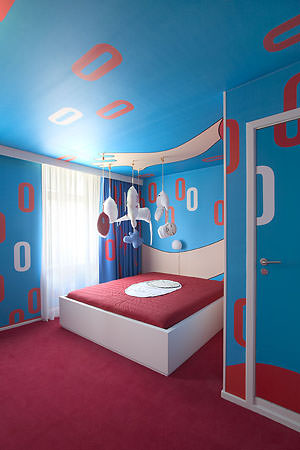 The story behind Hotel Fox is that it was once an aging hotel that Volkswagen decided to spruce up by hiring 21 artists, graphic designers, street artists, illustrators and the like to decorate the hotel’s 61 rooms. Each artist was given license to create whatever they wanted in their own personal style. Which means every room in the hotel is distinctly different. Artsy hotels abound in most metropolitan cities across the globe, but Hotel Fox remains one of the warmest creative spins on modern hotel living, and it is located right in the heart of Copenhagen, near the Stroget shopping area.

One of the rooms named”sleep seasons” (#121) was created by an Australian designer. This room consists of a big comfy tent, surrounded by adorable woodland forest creatures, looks like a fort from “where the wild things are”. This room is considered one of their medium priced rooms and runs about  $138 per night. 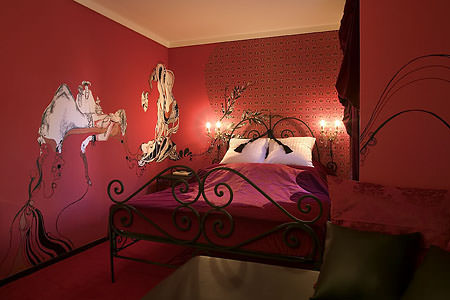 You can  rent an iPod from the hotel or a bicycle and check this out….your bicycle charges your cell phone while you ride it! The hotel offers free breakfast (organic choices) and the hotel bar, which is actually the hotel lobby,  transforms itself  into a bar Thursday through Saturday with a DJ and signature cocktails.

Hotel Fox has received the Green Key certificate for sustainable development and the hotel is also listed as CO2 neutral. The hotel observes Earth day by turning its lights out between 8:30pm and 9:30pm, illuminating the lobby  with candles. The hotel usually features some type of Eco friendly art each month, such as the Solar Peace Sculpture and the Climate Quilt. 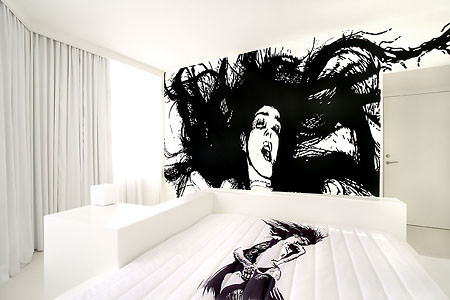 The Fox hotel has a package called “tour de fox “ where you can stay in 3 different rooms in 3 days time. You decide which ones you want to try out.  Since most of us would wonder …Is my room the best one?  Although my question is: can I actually sleep in this room?  Some of the rooms are “Loud” in décor and some have strange sized beds, so make sure you see the picture before you choose.  Crazy like a fox comes to mind when seeing some of these wildly decorated rooms.

The hotel fosters the growth of a  new generation of cooks, hotel managers and artists. There is a movie on their website about the Fox project. The Hotel Fox website promises, “You will find flowers, fairytales, friendly monsters, dreaming creatures, secrets and vaults… something for everyone at the Hotel Fox.”