The ancient paintings that are found on cave walls throughout the world could be “the greatest art museum on the planet,” according to the noted French prehistorian Jean Clottes. The richest trove of prehistoric drawings and carvings, some dating back 35,000 years, is in the limestone caves of southwestern France. 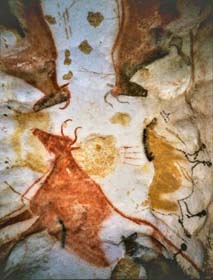 After visiting several caves, I’m hooked, always looking for more. The craftsmanship of those long-ago artists is amazing, and you can speculate endlessly on the meaning behind their work. Why did they put so much effort and skill into painting lifelike animals on walls deep in the darkness? Theories abound, but no one really knows.

The two best-known caves are closed to the public: Lascaux and, further east, Grotte Chauvet. You can catch a glimpse of the art that lies in the dark, though, in nearby reproductions.

In 1940, four boys following their dog stumbled upon Lascaux, and when the magnificent paintings of bulls, horses, and deer were discovered on the cave walls and ceilings, visitors swarmed to “the Sistine Chapel of prehistoric times.” All that human breath caused fungus to grow on the walls, and the paintings deteriorated so badly the site was closed. A replica of its main chambers, called Lascaux II, was built and this is what visitors marvel at today.

The Chauvet cave, discovered in 1994, is filled with complex scenes of cave lions and black horses, bison, reindeer, and bears, done in accurate perspective. Although the cave is closed, exact copies of the rock art are in the town of Vallon-Pont-d’Arc, northwest of Avignon in the Ardèche region. 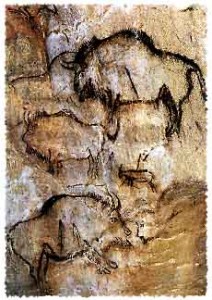 Other caves are open for tours. In Grotte de Niaux, about 100 kilometers south of Toulouse in the Ariège region, you can see 12,000-year-old paintings of horses and bison. The human footprint on the cave floor can’t help but take your imagination back in time. Niaux is strictly regulated, with 20 people allowed per visit, 11 visits a day, and you need advance reservations. A ticket is good for a discount at the Prehistoric Art Park in nearby Tarascon. I suggest a visit to the park before your cave tour for a better understanding of what you’ll see.

Grotte du Pech-Merle, above the River Célé in the Dordogne, is probably France’s most impressive cave open to the public. Here, too, you need to book tickets in advance (also good for museum entrance). In the large chambers you’ll see stunning rock formations, paintings, and stenciled human hands, as well as footprints.

Font de Gaume, on D47 and a mile from the town of Les Eyzies, gets raves from every visitor. You’re close to some 200 cave paintings, done with mineral pigments thousands of years ago. Some say if you can see only one cave, make it this one. Only 200 visitors a day are allowed in, so be sure to reserve a ticket well in advance.

La Grotte des Demoiselles (”the fairies cave”) doesn’t have human rock art, but the natural formations are extraordinary. The cave, north of Montpellier in the Herault region, has a chamber 86 meters across and 52 meters high, filled with stalactites, stalagmites and translucent rock draperies that take your breath away. It’s well worth a tour.

La Grotte de Clamouse, 35 kilometers from Montpellier, is another example of natural beauty, a magical place of eons-old, intricate shapes. I found the sound-and-light show toward the end of the tour annoying, like slapping thick makeup on an elegant old lady. But that’s a mere quibble; the place is truly a wonder. 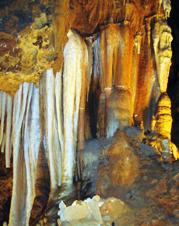 A don’t-miss-it site, though it’s not actually a cave and has no human rock art, is Aven d’Orgnac on the Ardèche plateau. The immense underground cavern, formed over millennia by water, earthquakes and erosion, was discovered in 1935 by Robert Joly, a noted speleologist. He was lowered by rope from a hole in the ground. Today’s visitors enter by staircase, walk a safe, 500-meter route through chambers filled with strange, nature-carved shapes, and return by elevator to the top.

Written by Marilan McFarlane for EuropeUpClose.com

Check out this cave, also in the area, impressive!

Also read 'Shelters of Stone'. No doubt about the description of the caves, but I wonder if the other geography is true or fictional - ie: what river is she referring to as "The River".

Anna, thanks for your comment. Jean Auel is a meticulous researcher, and all the caves she describes exist in reality. I have no doubt that some I've mentioned, especially the Lascaux and Chauvet caves, are referred to in her books. Her next book, #6 in the series, to be published in 2011, is "The Land of Painted Caves."

I am reading "Shelter of Stone" by Jean Auel. I want to know if these possibly the caves that Jean used for her plot in the book. I really find it fasinating all that was left behind and that one of these and possibly two are closed to the public. If I ever make it to France in the future I will plan in advance to purchase tickets fo tour the caves if possible.