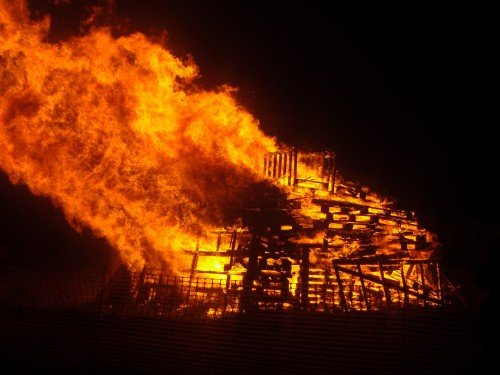 On 5th November, 1605, a disgruntled Guy Fawkes attempted to blow up the House of Lords and assassinate King James I. Fawkes was a Catholic, and was desperate to replace Protestant King James I with a monarch of his own religion. The treasonous plot wasn’t successful, but the city was still set alight, as Londoners celebrated Fawke’s failure by lighting their own bonfires. The date was later recognized as a public holiday, and bonfires still burn in England on the anniversary of the event.

Lewes, a small country town in southeast England, marks the date with spectacular gusto, but not only because of Guy Fawkes and his ‘gunpowder plot’. Catholic Queen Mary I, who later became known as ‘Bloody Mary’, ordered seventeen local Protestants burned to death in front of what is now the Town Hall during the mid 1500s. These Marian Persecutions, as they’re now called, have not been forgotten by the people of Lewes, and the theme of fire has taken on an additional significance here on the 5th of November. 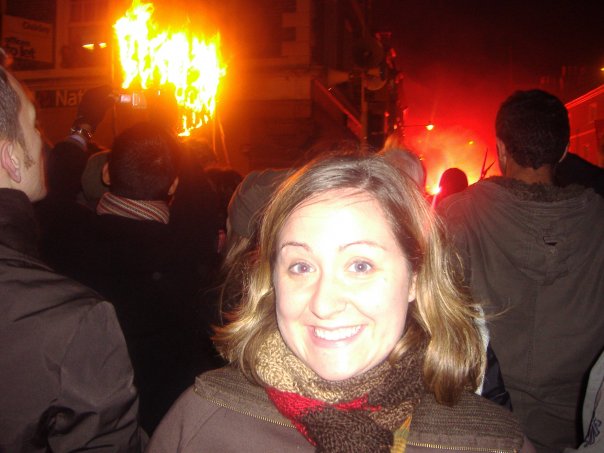 By day, and on 364 nights per year, the atmosphere of Lewes is quaint and peaceful. On the night of the 5th of November, however, the windows go dark and tens of thousands of people descend upon the streets, walking shoulder-to-shoulder through the thick crowd. A procession begins and winds its way through the center of town, with burning crosses and effigies carried on wooden carriages. The Pope is always among these effigies, so fainthearted Catholics should beware—this event is probably not for them. The other recurring effigy is Guy Fawkes himself, usually portrayed in chains and being sent to his death. Politicians and infamous celebrities are also popular choices for effigies, depending on the current events of each particular year.

‘We wunt be druv’ is a commonly heard and displayed phrase during this procession, and loosely translates to ‘we won’t be pushed around’. This slogan is a source of Sussex pride, especially on the 5th of November. The victims of the burnings are commemorated all year round with a memorial, but on this evening the Persecutions are avenged with fire. As the procession arrives at the edge of town, near the Lewes Downs, an audience gathers around the effigies. Fireworks shoot by from every direction, with flashes of color and loud explosions happening just feet away from the onlookers. 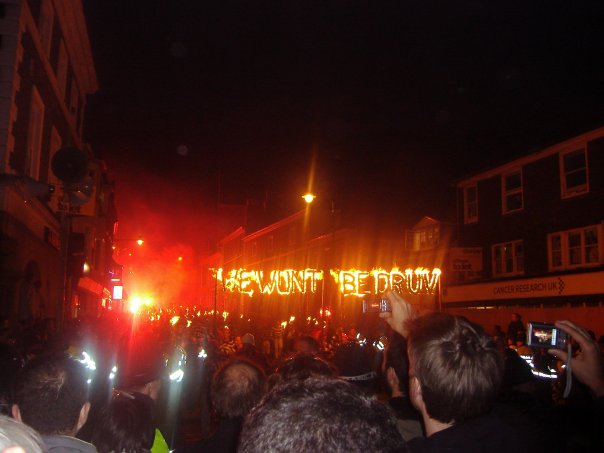 Finally, the effigies are placed in the fields and spectacularly obliterated. They aren’t just burned, but are instead destroyed with powerful fireworks. As each one disappears in smoke and thunderous noise, the crowd applauds heartily. The Pope and Guy Fawkes are saved for last—a position of honor, or rather, dishonor (as I said, sensitive Catholics beware). The atmosphere is electric.

The festivities continue into the wee hours of the night, centered around an enormous bonfire that befits Guy Fawkes Night. After the thrill of the procession and effigies is over, this bonfire is a welcome reminder of what is usually celebrated on the 5th of November. The entire town contributes fuel for the flames, and the people stand together to watch and remember the treasonous plot that almost, but didn’t, destroy the House of Lords.

Lewes is less than an hour south of London from the Victoria train station. For more information, check out Lewes Bonfire Council.

I've been there!!! I've hired a car from Auto Europe and got drunk there a lot. It was so hot!!! Uffff