Located on the Rhine River outside the major metropolitan district of Frankfurt, the German city of Mainz is a sight to behold. The fanciful buildings of the Mainz plaza (sparkling with Christmas lights in the winter), the historic surrounding district, and the adjacent sandstone cathedrals, make this a unique destination. Mainz is best enjoyed on foot and a great way to see most of the sights is to walk between two of the city’s most beautiful churches:  The Mainzer Dom and St Stephan’s Church. 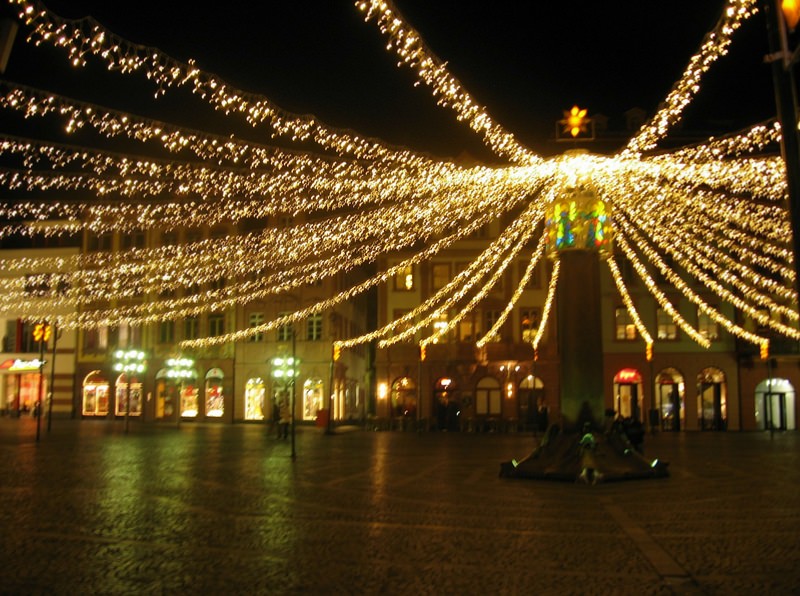 Magnificent may be a grandiose and overused word, but it is without doubt the adjective that best fits the 1000-year old Mainzer Dom. The Dom, or cathedral, dominates the city’s skyline and is centrally located in the Mainz plaza, which is a lively communal gathering space and the site of a weekly farmer’s market. The market offers Alpine cheeses, fresh-roasted coffees, sausages, and heaps of chocolate. The Dom, constructed of soft, red sandstone, gives off a very pleasant visual effect of a glowing pink structure in the evening light. From some perspectives, the cathedral resembles a Disneyesque Cinderella castle, an image connected with fantasy, discovery, and imagination. Indeed, one visit to the Mainz plaza in the shadow of the Dom will forever etch it in your mind as a place of schöne Erinnerungen (fond memories). 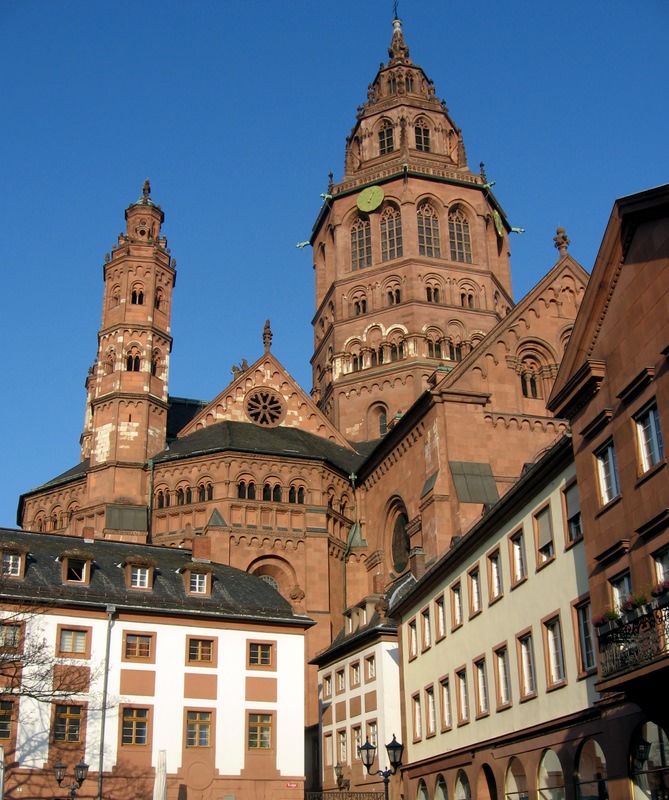 There are a number of tombs in the Dom that deserve a careful visit, not so much for the fame of the interred, but for the artistry and intricacy of the tomb facades. Even the entrance to the crypt is prefaced with a towering construction of leaping skeletons. A bit macabre perhaps, but it is difficult not to appreciate this masterful sculpture. 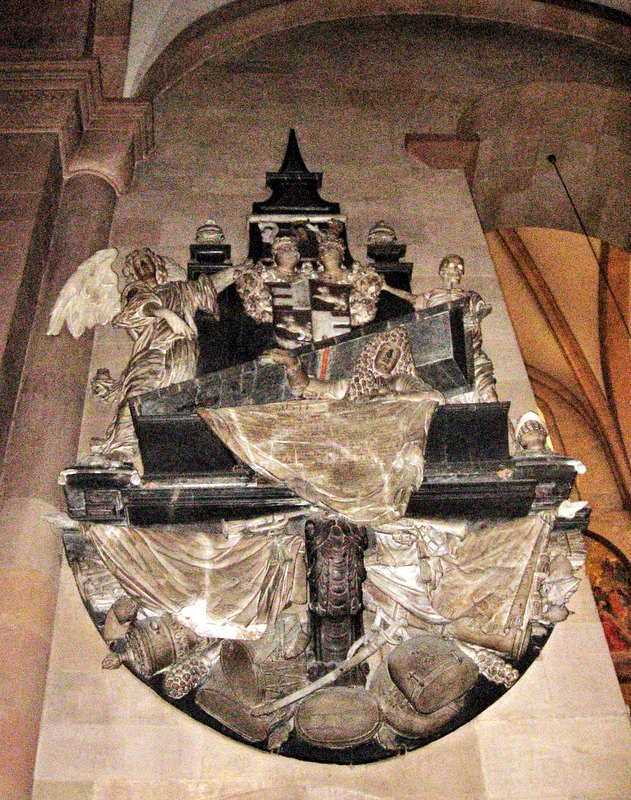 The grave carvings on the Dom pillars date from the early middle ages to the nineteenth century and the official Dom guide claims that, “no other German cathedral has such an extensive collection of epitaphs.” 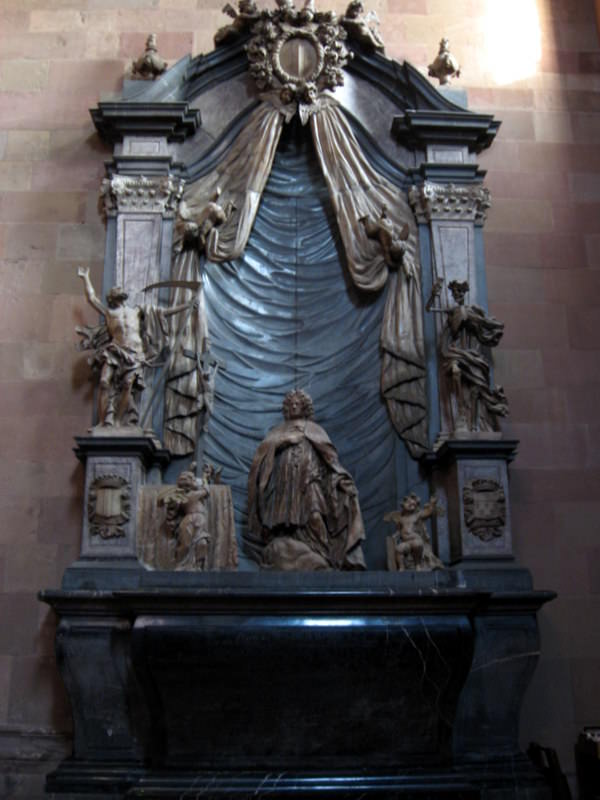 Walk through the central aisle and enjoy the hand-painted biblical murals, as well as the multicolored light display splashed on the walls by the large stained glass windows. 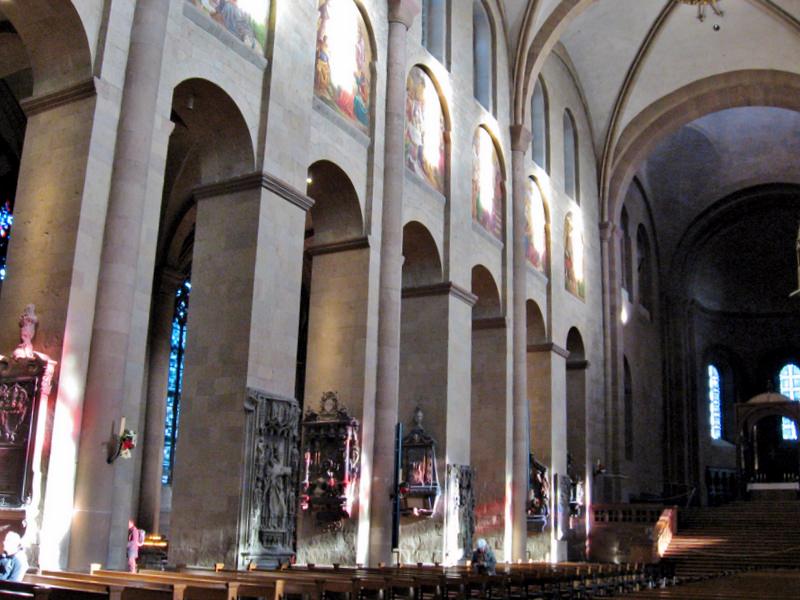 Two altars are located at opposing ends of the church. The High Altar contains beautiful stained glass and precious religious artifacts dating from the earliest days of the church. The altar located below the expansive dome is approached by 40 or so stone steps where a simple cross is exhibited. The view from the top of the steps provides a panorama of the entire church, which exquisitely captures the breathtaking size and space of the cathedral, so that you may feel that you’ve climbed to some dizzying height rather than to the top of an altar staircase. 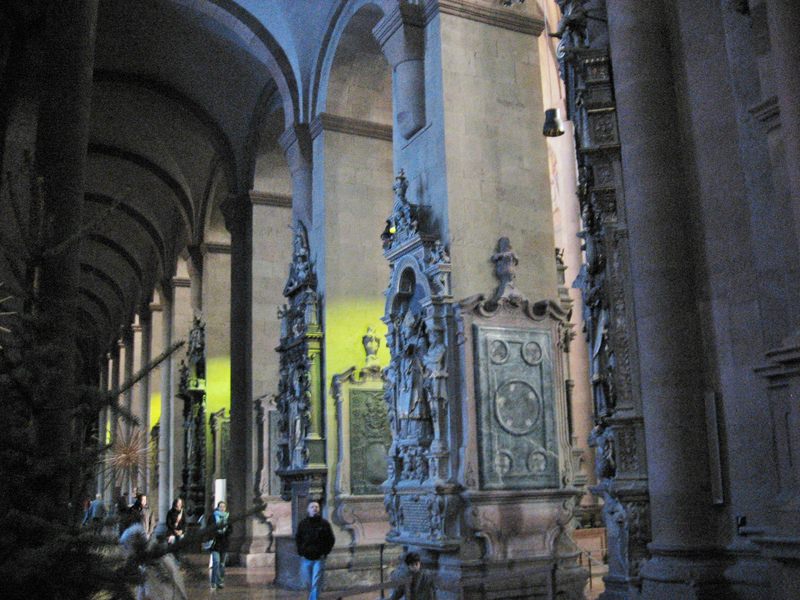 After touring the Dom, walk across the plaza for a tea break at the Café Extrablatt. I’ve been to this café on every visit to Mainz and recommend the chai tea latte, made from a local recipe, with some fresh strudel. They also offer a large selection of flavored hot chocolates, lunch items, hand-crafted coffees, spiced ciders, and pastries. Overall, it is a lively and creative space to spend a half hour before traveling to your next destination. 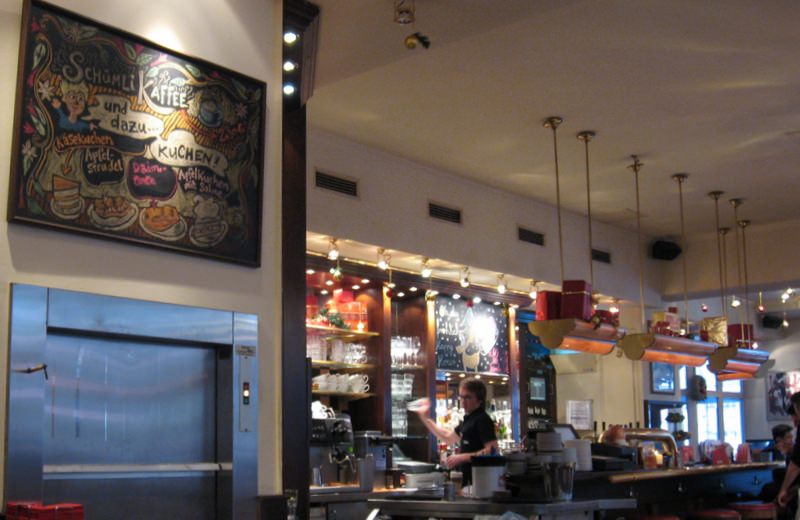 A short walk through the plaza and down the historic Augustinerstraße (the oldest area of Mainz) brings you to St Stephan’s Church (Stephanskirche). 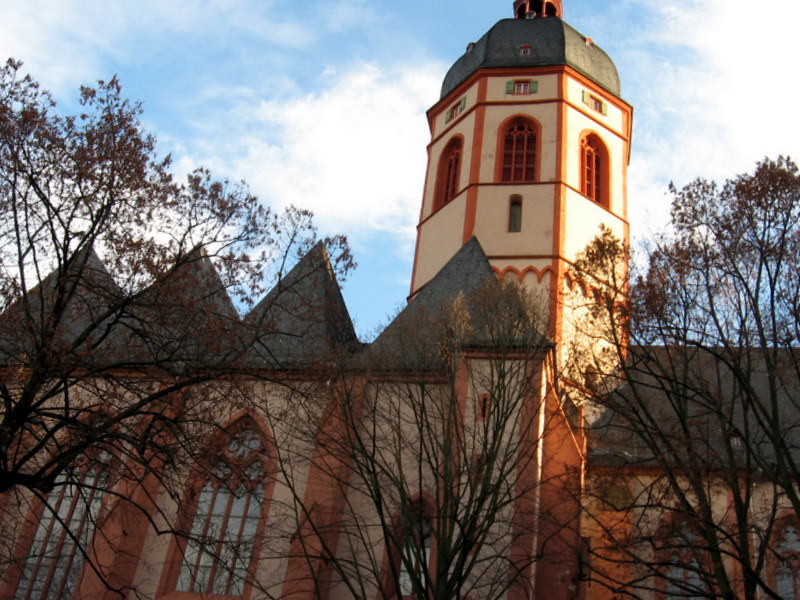 While the imposing Mainzer Dom was built as an emblem of power and a resting place for the great and mighty, St Stephan’s is an entirely different experience. This church is constructed of the same red sandstone common to Mainz buildings, but the atmosphere is entirely unlike the formal Dom. Here, you’ll find a place of tangible peace, serenity, and actualized reconciliation. These elusive qualities are linked to the story of the church’s Chagall stained glass windows that bathe the whole church in a warm, blue light. 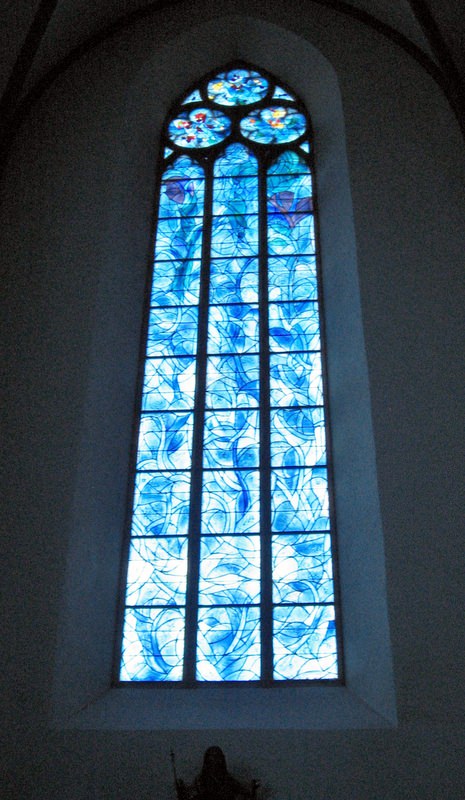 It is a rare thing to find rows of tourists seated silently in church pews with cameras tucked away, but such is the scene at St Stephan’s. Perhaps the recent history of the site and its peaceful atmosphere inspires visitors to treat it as a place of reverence rather than just another attraction on a tour guide to-do list. In fact, it was dedicated in the late 900s as “a place of constant prayer for the whole territory.” Of course, there is complete freedom to walk around the church and photograph the windows. Volunteers at an information desk located under the rainbow windows will gladly tell you the bulky history of the church stretching back to early medieval times, right up until the very recent past – a development that gives the church its current, shimmery, blue light and perfusive tranquility. 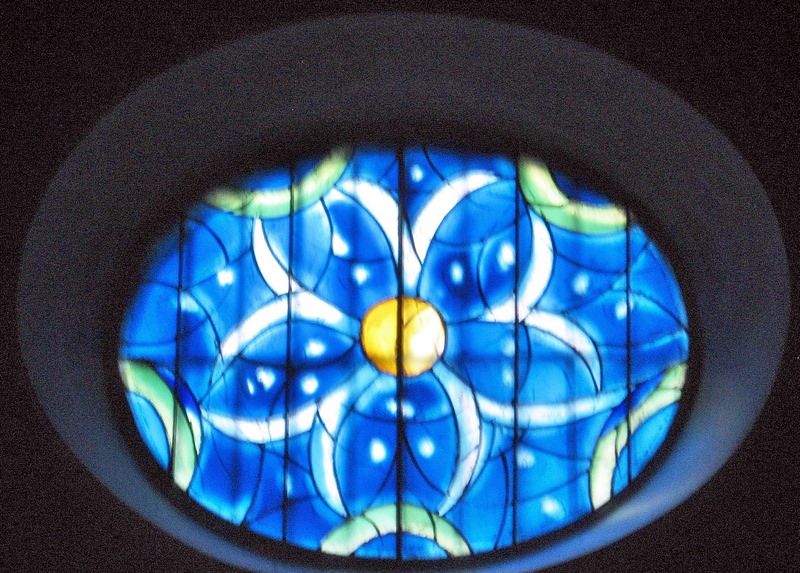 The church was heavily damaged during World War II, with the medieval stained glass windows entirely bombed out, and they stayed that way until the 1980s. As a symbol of German-Jewish reconciliation, the German priest of St Stephan’s actively sought the friendship and talent of Jewish artist Marc Chagall, who fled Nazi-occupied France during the war. Chagall created nine of the stained glass windows, which depict scenes from the Bible common to both Christian and Jewish traditions. The other windows were finished by Chagall’s students after his death in 1985. Apart from the biblical scenes around the altar, the rest of the windows are emblems of peace and hope, such as rainbows, white doves, and sunshine. 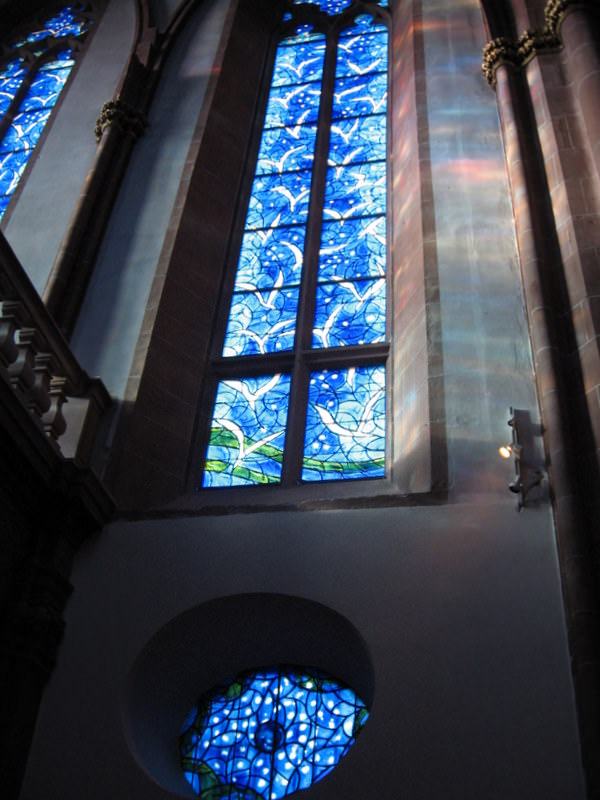 The Mainzer Dom is a place for walking and appreciating the immensity of the structure, and the artistry and craftsmanship of the interior; while St Stephan’s offers a tranquil space to relax and enjoy modern art with an uplifting history. Only about a 15 minute walk from each other, take the time to enjoy these contrasting churches on your next visit to Mainz.

Written by and photos by Erin Connolly for EuropeUpClose.com

This was an excellent story. I visited these churches a couple of years ago and you brought it all back to me. I especially loved the Chagall windows.