On a clear day, Zurich proudly shows off its medieval squares, towering stone churches and spires, and the ever-present Limmat River. Easily explored by foot, Zurich’s main sights are clustered for one mile along the banks of the placid, blue Limmat River. With a walking tour, you really get to know the winding, narrow, hilly cobblestone streets and fascinating museums, including the Swiss National Museum. 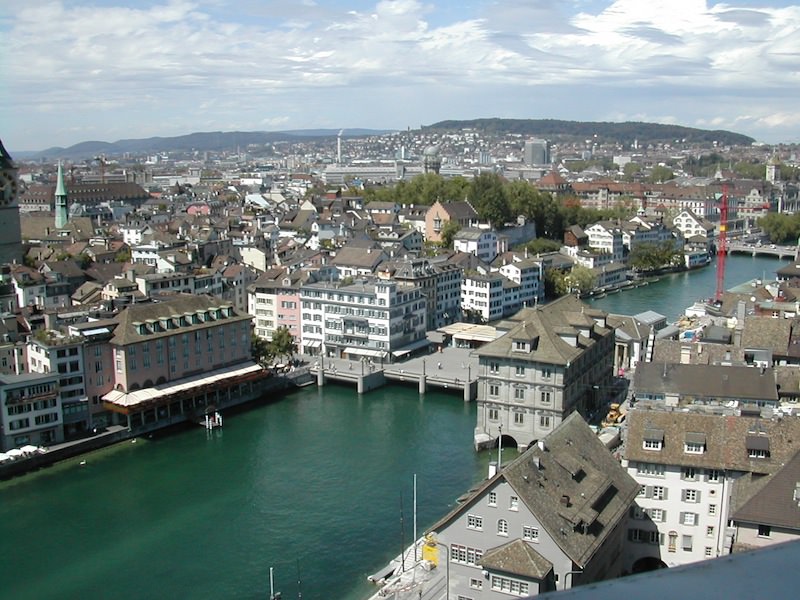 View from the Wasserkirk over the Limmat River and Old Zurich

Zurich’s self-described status, on a per capita basis, as possessing the world’s largest number of public fountains, telephones, computers, and Nobel Prize winners somehow seems to encapsulate the city perfectly. Tucked away on a corner of the (lake) Zurichsee, this city of art, culture, small discretely disguised banks, and unselfconscious sophistication reeks of stability and prosperity. Start your tour at the Bahnhof, Zurich’s Railway Station. The anchor of the lifeblood artery of Zurich, this Neo-Renaissance station brings in businesspeople and tourists by the thousands every day. 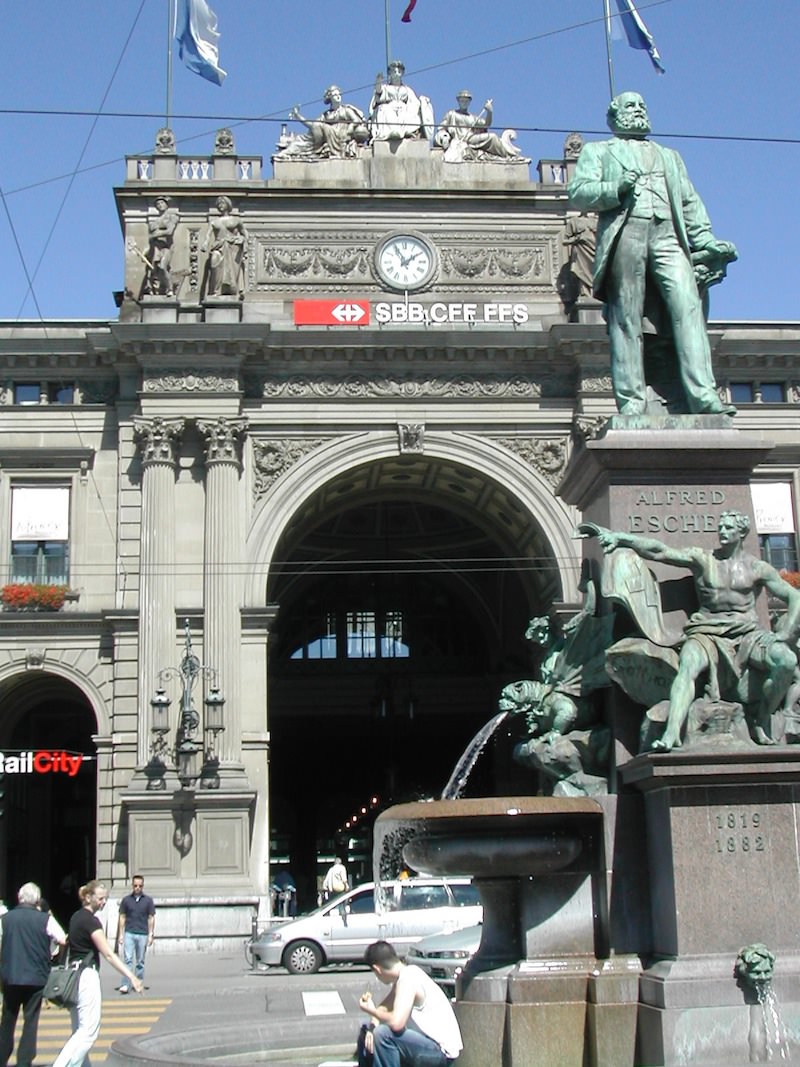 Monument on Bahnhofplatz to Alfred Escher

Across the road, the Schweizerisches Landesmuseum (Swiss National Museum) displays an eclectic exterior of several architectural designs and materials–granite, limestone, and sandstone all form the exterior of this Gothic-style castle. Inside you’ll get a crash course in the country’s history and culture from prehistoric to modern times–a great way to start your tour. Plan on a solid two hours to browse the exhibits describing the life and times of Zurich during the Middle Ages. The long hall of formidable ancient weapons and armor forms the main spine of the museum, with the other galleries branching off. 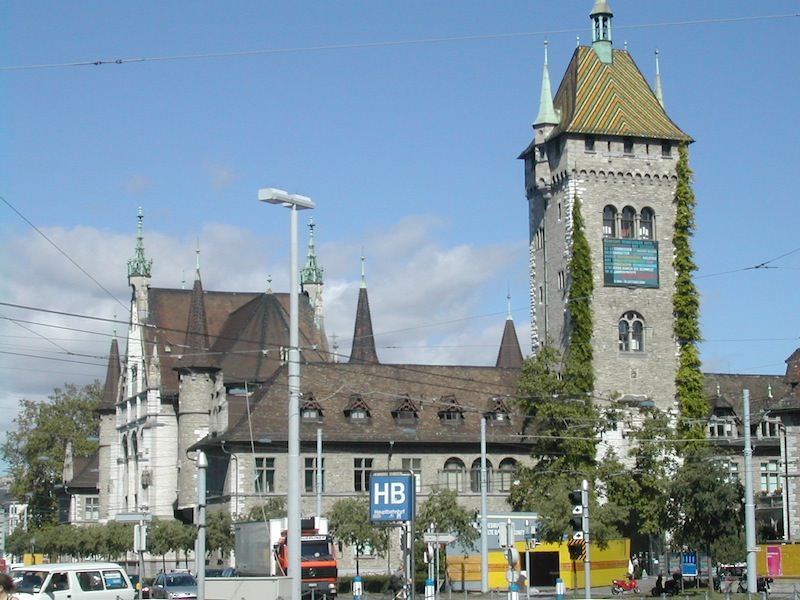 The Hallwil collection, the museum’s prize exhibition, displays ceramics and everyday objects used by the Hallwil family since the Middle Ages. The heavily decorated renaissance living room with paneled salon, stained glass windows, inlaid tabletop, antique chairs, lamps and artwork take you back to those times. The remarkable Celestial Globe made by Jost Burgi a watchmaker and astronomer, in 1594, is one of only five such globes in the world, and is a magnificent piece of artwork. In fact, I’d very much like it in my living room as an object d’art, although I’m sure it’s out of my price range. 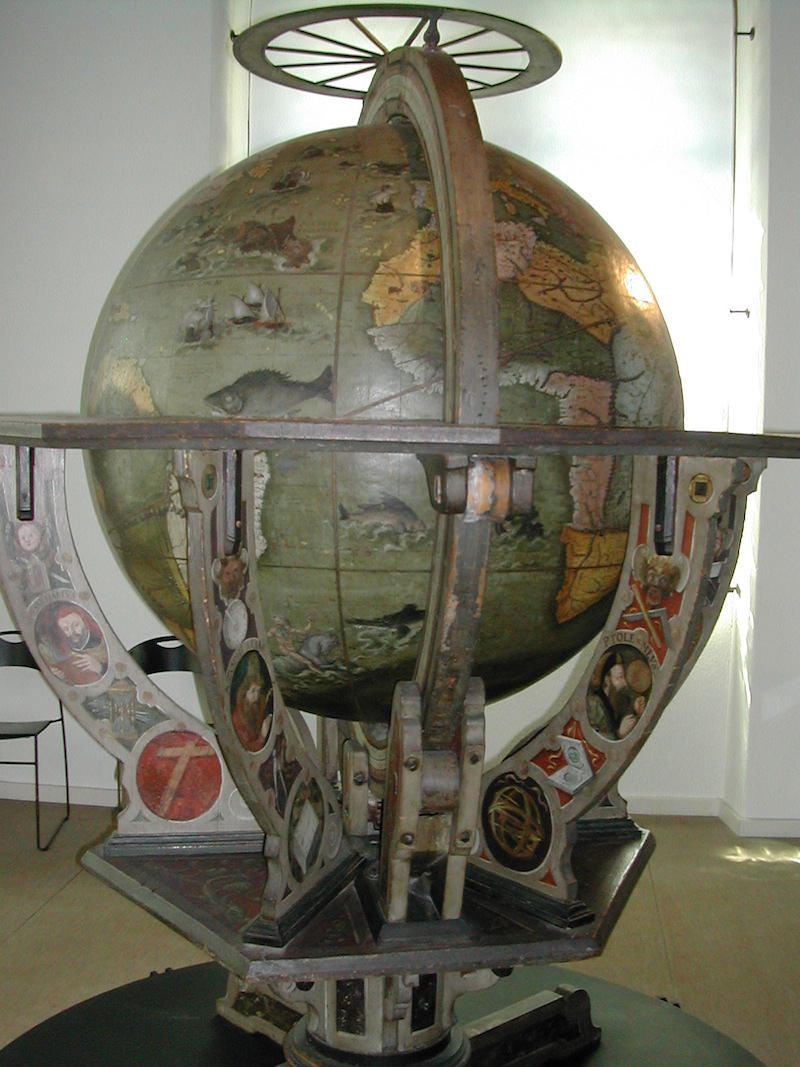 The Celestial Globe made by Jost Burgi in 1594

Zurich’s prosperous, principal shopping street, the Bahnhofstrasse, runs south from the museum along the tram lines, and is interspersed with restaurants and several major Swiss banks. Here you’ll have fun looking for all things Swiss in the shop windows: Swiss watches, Swiss Army knives, and chocolate. Further down the Bahnhofstrasse you’ll come to the Lindenhof, a tree covered hill which was home to Zurich’s early Celtic settlement and later the site of a Roman fort. The observation platform here gives a great view of Zurich’s red rooftops. 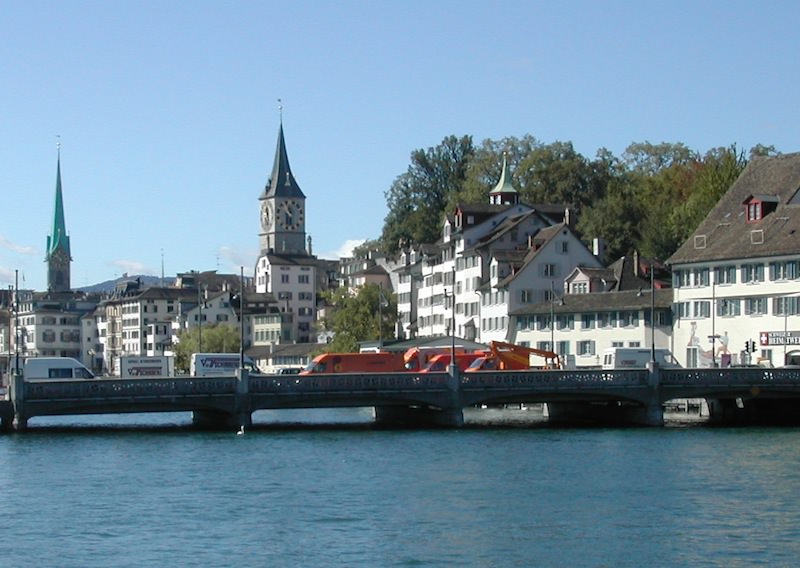 Don’t miss the St. Peter’s Kirche, renown for the 28-foot diameter clock face on its tower. Appropriately for Switzerland, the iconic land of timepieces, this is the largest clock face in Europe. Inside, the church is decorated in the Baroque style.

Next on your tour of churches is the 13th-century Fraumunster, which celebrates a mix of Romanesque and Gothic architecture. Look for its five red, navy blue and orange stained glass windows by Chagall—the famed glassworker and artist—that depict biblical scenes.

Next to the Fraumunster you’ll stumble across a little treasure of a museum, the Guild House “Zur Meisen”. It is hard to find in the tourist literature,so look for a sign on the exterior which describes its contents as, “The Splendor of the Burgher’s Table”. You’ll be pleasantly surprised by the superb decorative art as you walk through the baroque rooms–ornately decorated delft tiled ovens, faience tableware, porcelain, furniture, gold edged mirrors, and other art.

Cross over to the east side of the river and you’re on the Limmatquai, a pretty riverside boulevard. From here you’ll see the Rathaus, Zurich’s town hall, dating from 1698. This distinctive two story baroque building stands on piles right over the Limmat River. Only a few hundred meters up the hill, the twin towers of the Grossmunster Church provide a panoramic view over Zurich. The church’s interesting history claims that Charlemagne founded a church on this spot in the late 8th century. 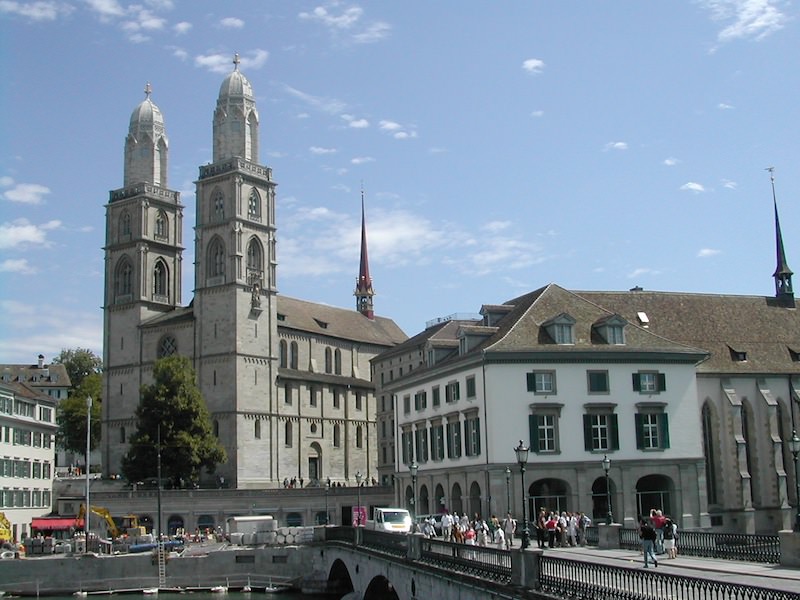 View over the Limmat Rver to Grossmunster Church

Humanist Ulrich Zwingli preached the Reformation from here, his message soon spreading to other Swiss cities. Make sure you see the large crypt, a stone Romanesque portal with bronze doors, and stained glass windows. And ascend the steps up the tower for a marvelous view of Zurich.

Walk a few hundred meters further to the end of the Limmatquai and gaze out over the picturesque blue waters of the bay on the Zurichsee Lake. Here you can stroll along the Utoquai for a moving panorama of the bay, or you may want to take a boat trip on the lake. 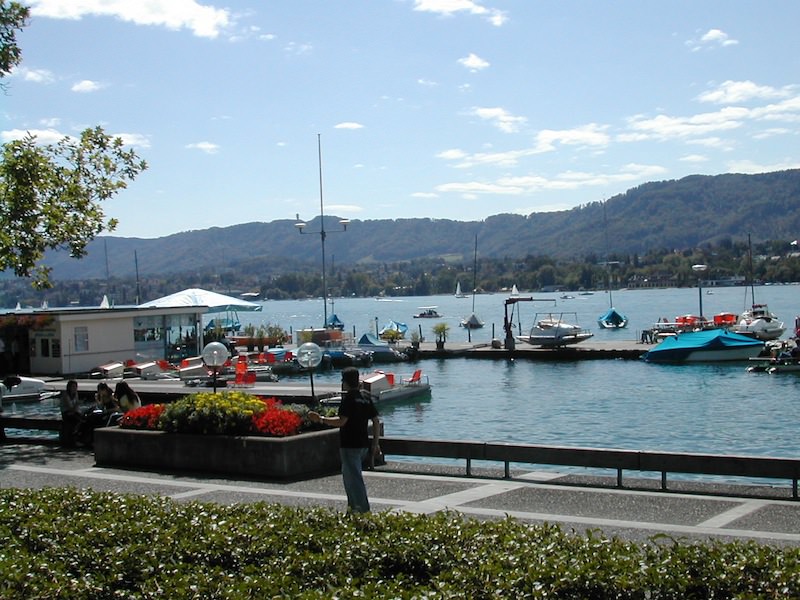 Other Zurich sights worth seeing for the art aficionado are the Fine Arts Museum, the Museum of Contemporary Art and Museum Rietberg. The Clock and Watch Museum Beyer, boasts 500 chronological instruments dating from 1400 BC, if you’ve still got time and energy for more sightseeing.

These attractions will take you two solid days. My preference is to stay in hotels on the Niederdorf, the eastern section of Zurich’s Old Town. Its pedestrian street is lined with antique shops, art galleries, small hotels, cafes, music pubs, discos, restaurants and fast food outlets.

Where to stay in Zurich

Hi Roy, Thanks for the tip on the Guild House Museum – I’ll keep it in mind for my next visit to Zurich. I would like to mention that in addition to the Chagall windows of the Fraumünster, I would definitely recommend the stunning windows of artist Sigmar Polke in the Grossmünster, inauguarated in 2009. Happy Travels, Karen