My introduction to Greek wines was during my first visit to Santorini, Greece some thirty years ago. I fell in love with Lava wine, from the Koutsoyannopoulos’ Volcan Wineries, on the island. Perhaps I was attracted first by the appealing label: a copy of a Minoan fresco with a fisherman holding bundles of his catch. But when I tasted the wine, a medium rose with a velvety taste and aroma of fresh fruit, it became one my favorites. Of course after that I sampled other Greek wines, and grew familiar with various labels of other wineries like Naoussa, Tsantalis and Boutari. 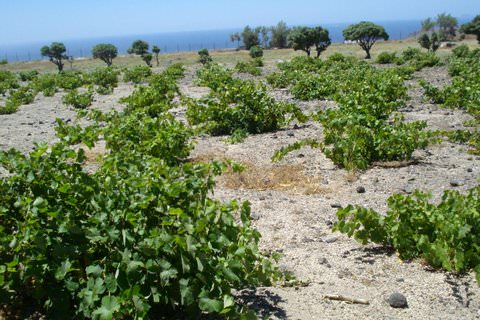 Vineyards of the Boutari Wineries

Greece is one of the oldest wine-producing regions in the world, dating back 6,500 years. The Greek’s worship of Dionysus, the god of wine, spread throughout the ancient world; and Greek wines were well known and traded throughout the Mediterranean.

The vineyards of Greece are not only on the mainland, but several of the islands are renowned for their wine regions. Recently, I visited some of the Greek island wineries. On Santorini, I took a taxi from Fira to the Boutari Winery  located in Megalochori on a high plateau with a wind-swept view of the six acres of vineyards. On Santorini, wine has been produced since ancient times when the region was known as Thira. It is most famous for its white grape varieties although some red grapes can be found. About 1,200 hectares of land on Santorini are under vine. After the Middle Ages Santorini wines became famous under the Venetians and today the Italian influence is still present in Santorini winemaking. The Koutsoyannopoulos Wine Museum on Santorini, located in a natural cave eight meters below ground, presents the history of wine and the lives of the vine-growers on Santorini since the 1600’s. Unfortunately, I missed out on the wine museum but I did make a day trip to the Boutari Winery. Boutari’s best wines are not exported, so I was pleased that I got to taste them and I learned a lot about Greek wines, especially the wines of Santorini. 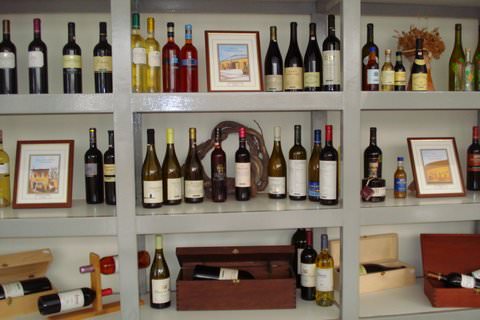 What makes the wines of Santorini special is the way the grapes are grown. The vines are coiled close to the ground to protect them from the searing heat and the intense wind. Because the wind is so strong in Santorini, the coiling practice keeps the vines from being damaged or blown over. The Boutari Winery, one of the leading wineries on Santorini, invited me on a tour and where I was introduced to the art of wine tasting by the wine steward. I sampled a range of wine varieties, both red and white. Selladia Boutari is a dry white wine with the fresh, aromatic scents of green banana, white peach and citrus blossoms. Santorini Boutari, another dry, white wine with a subtle citrus aroma, is full-bodied with a long after-taste. Kallisti Reserve Boutari, a brilliant yellow dry white wine, has a complex aroma of wood and hazelnuts. Nykteri Boutari, another dry white with a golden color and high alcohol content is aged for twenty years. It’s a rich tasting wine, an excellent accompaniment with spiced dishes, sea food and grilled fish. Its name in Greek means “night work” as it was traditionally harvested at night.

In the red wine category, I enjoyed the Experimental Mandelaria which, with its rich full-bodied flavor could be enjoyed as an aperitif. If you like sweet wines, the Vinsanto Boutari is another naturally sweet wine with a characteristic  amber-red color acquired from the grapes exposure to the sun and the length of time the wine is kept in the barrel. The syrupy texture makes it a good wine to serve as an aperitif. Vinsanto is an ancient winemaking tradition of Santorini and is an important part of the island’s history. It is made predominantly from the Assyrtiko grape and contains natural sugars and acids of the grapes.

The sommelier explained that Boutari is trying break into the cartels so they can export more of these fine wines which are not available in North America. I bought a bottle of Vinsanto to bring home for a special occasion. And for sentimental reasons, I later bought a bottle of the Vulcan Wineries Lava Rose, the wine I had tasted on my first visit to Santorini in 1979.

The island of Samos is another great wine-growing area of Greece. Samos is the most verdant island in that area of the Aegean off the Turkish coast, and is known for its sweet wines which have been famous since antiquity. The Samos Cooperative produces eight varieties: four sweet wines, three dry and a rose. They are well known for the Moschato Aspro which gave Samos a reputation for sweet wine in the international markets. The Samos Wine Museum is located in Malagiari, a short taxi ride from Vathi town. The museum offers an exhibit of wine history on Samos. I spent an interesting hour there browsing the displays then relaxing in the wine-tasting area. Eight bottles of wine were set out, various vintages and types —except for one rose, all white wines. There were no wine stewards supervising the tasting so you could pour and sample as much as you liked. I tried each one and decided on the Samian Nectar, a delicious dessert wine. Later, when I spoke to the manager and told him I was a travel writer, he gave me a large bottle of the Nectar as a gift. 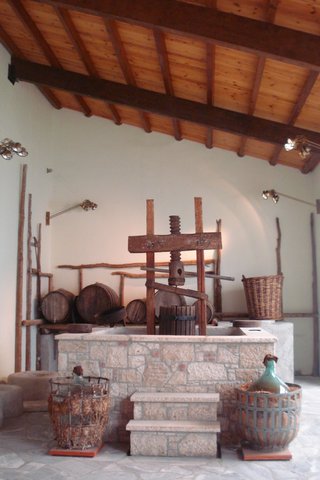 Naxos island has been the center of folk lore, myth and legend regarding the grave vine and wine since ancient times when it was important to the worship of Dionysus. There are vineyards all over the island, primarily in the mountainous areas, although many of the vineyards are privately owned by families. The winery of Prompona produces Naxian wine for distribution.

The island is mostly famous for its local liqueur named Kitron. The first distillery was established on Naxos in 1896 in the village of Halki. I have visited the Vallindras Kitron Distillery at Halki on two different occasions. It’s one of the stops on the round-the-island tour which I recommend for anyone visiting Naxos. 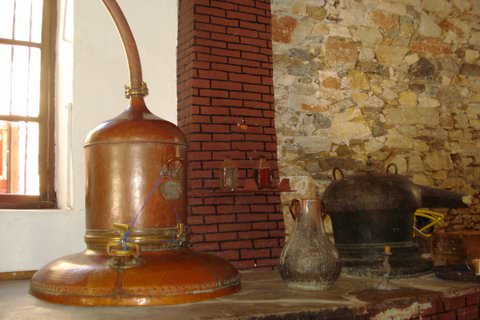 Kitron is a lemon flavoured liqueur made from the leaves of the kitron tree that produces a large, lumpy lemon-like fruit once called ‘the Median apple’. Possibly the first of these fruits were sent back to Greece by Alexander the Great during his conquest of Persia. Kitron is unique to Naxos and until the Christian era it was the only citrus fruit cultivated in Europe. It was known for its medicinal qualities and it aslo became a symbol of fertility and affluence. At the distillery you can sample the three colors and strengths of the liqueur: Like cointreau, green is sweetest and contains less alcohol. It is usually served with fish; yellow is the strongest and has the least sugar; clear kitron is in between and is best for a new drinker. At the distillery store, I stocked up on samples of each color of kitron to serve as a unique aperitif to my friends at home.

Greek Food: A Taste of the Ancient Past

[…] it has been used for centuries, not only as part of the diet, but also for its healing properties. Greek wine is growing more popular with wine-bars opening all around Athens where you can sample from the […]