The Italian word “ossario” (ossuary) can be traced back to the Latin word osseus, which means boney, and this is, quite literally, exactly what Italy’s ossario are. A resting place for the dead, they have been called crypts, catacombs, and tombs, but none of these words quite get the point across. Ossario are usually rooms filled with bones that have been artfully cared for and, sometimes, artfully arranged. In 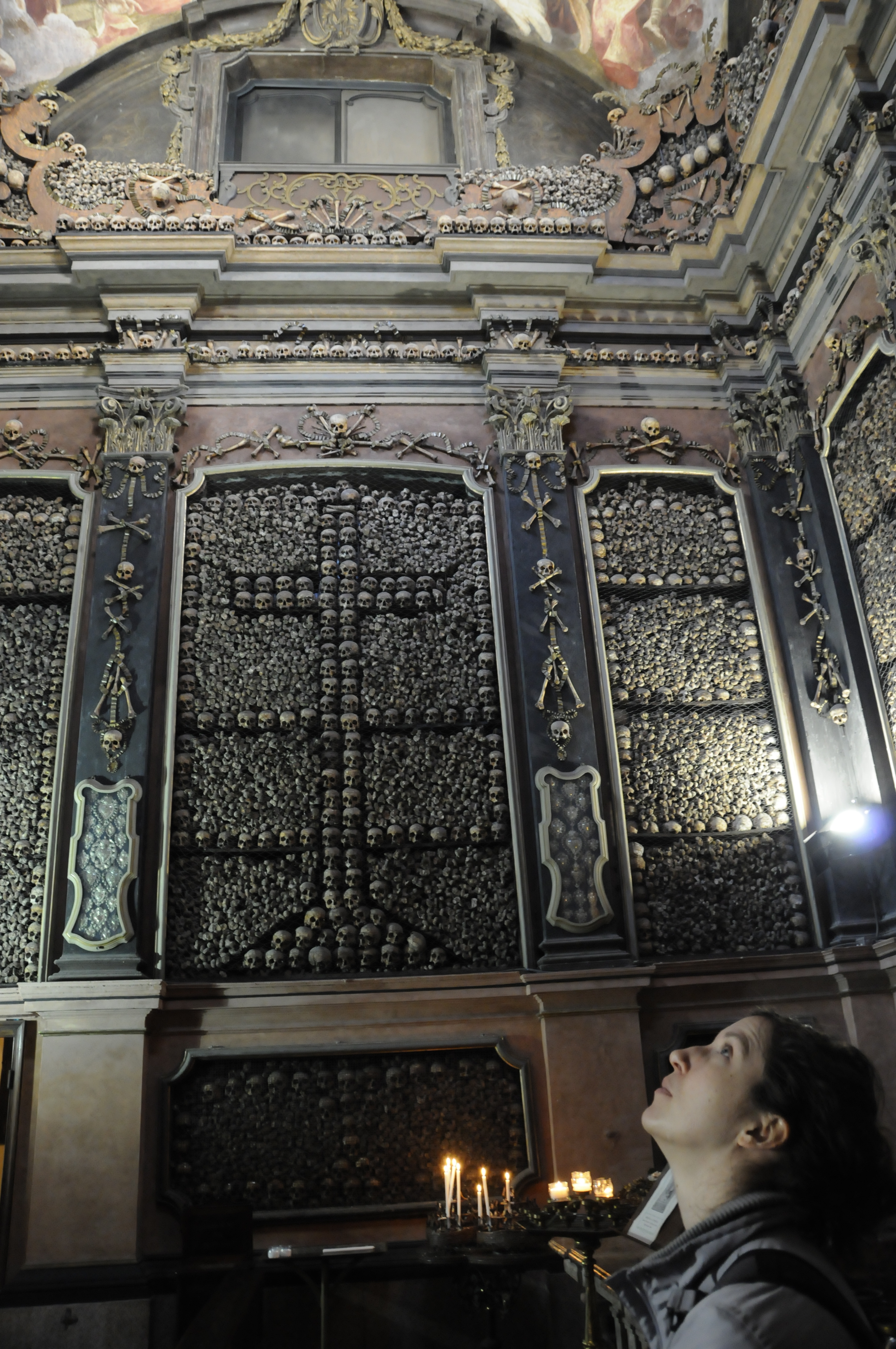 Palermo, Sicily, skeletons remain complete and fully clothed. And alongside these skeletons are bodies that have been locked in time through excellent preservation techniques. Though bodies were last placed in Italy’s ossario in the 1920s, some are so well preserved that they look to be alive today.

Ossario can be found in most Italian cities, though the best known are found in Palermo, Milan, and Rome. Naples has an ossario that is built into a cliff and was under renovation at the time of writing. Speculation as to why ossario exist is extensive, and no one really knows for sure. Each ossario has its own story. The first ossario I ever visited was in the Chiesa di San Bernardino in Milan. The church has a quiet exterior and the ossario is not advertised. In fact, it is very hard to find unless you know your way. After entering the church, immediately turn to your right where you will find a side room. In the far left hand corner there will be a door with a tiny sign that says “Ossario” that leads you inside.

Though the ossario in other cities are larger, I still find the one in Milan to be the most stunning. The bones are artfully arranged so that two sets of over 80 skulls each are used to make massive crosses on the walls.
Perhaps the most visited ossario is the Capuchin Crypt beneath the church of Santa Maria della Concezione dei Cappuccini. Located near the center of Rome, the church features a small gift shop at the entrance to the ossario and a donation is requested. Chants and other music are quietly played while you visit the five rooms of bones. Each room has its own theme, such as the scapula room. 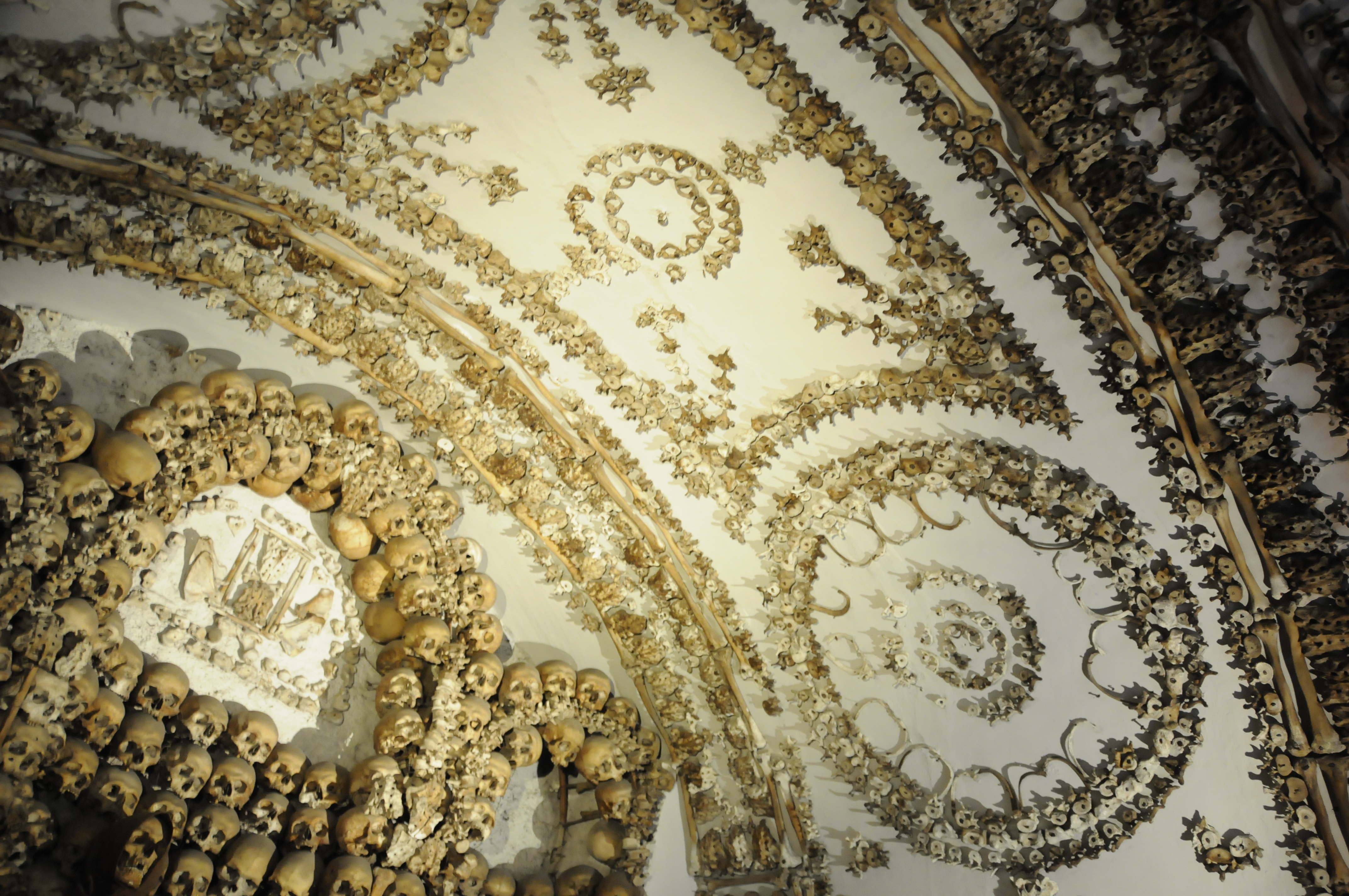 What Rome has that Milan doesn’t, are bodies that are more or less intact, held up by wires and wearing the famous brown robes of the Capuchin monks. Because of the preservation process that the bodies are put through immediately after death, combined with the dry conditions of the ossario, some of the remains of monks still have hair and skin. In one room, a particularly creepy sign reads, “What you are, we once were. What we are, you will become.”

I have not been to the Capuchin Catacombs of Palermo, however I have seen the pictures, heard the tales, and read the history. Palermo is unique in that its Capuchin Crypt is avidly advertised and visitors are charged admittance. But that’s not all, the crypt features mostly complete skeletons dressed 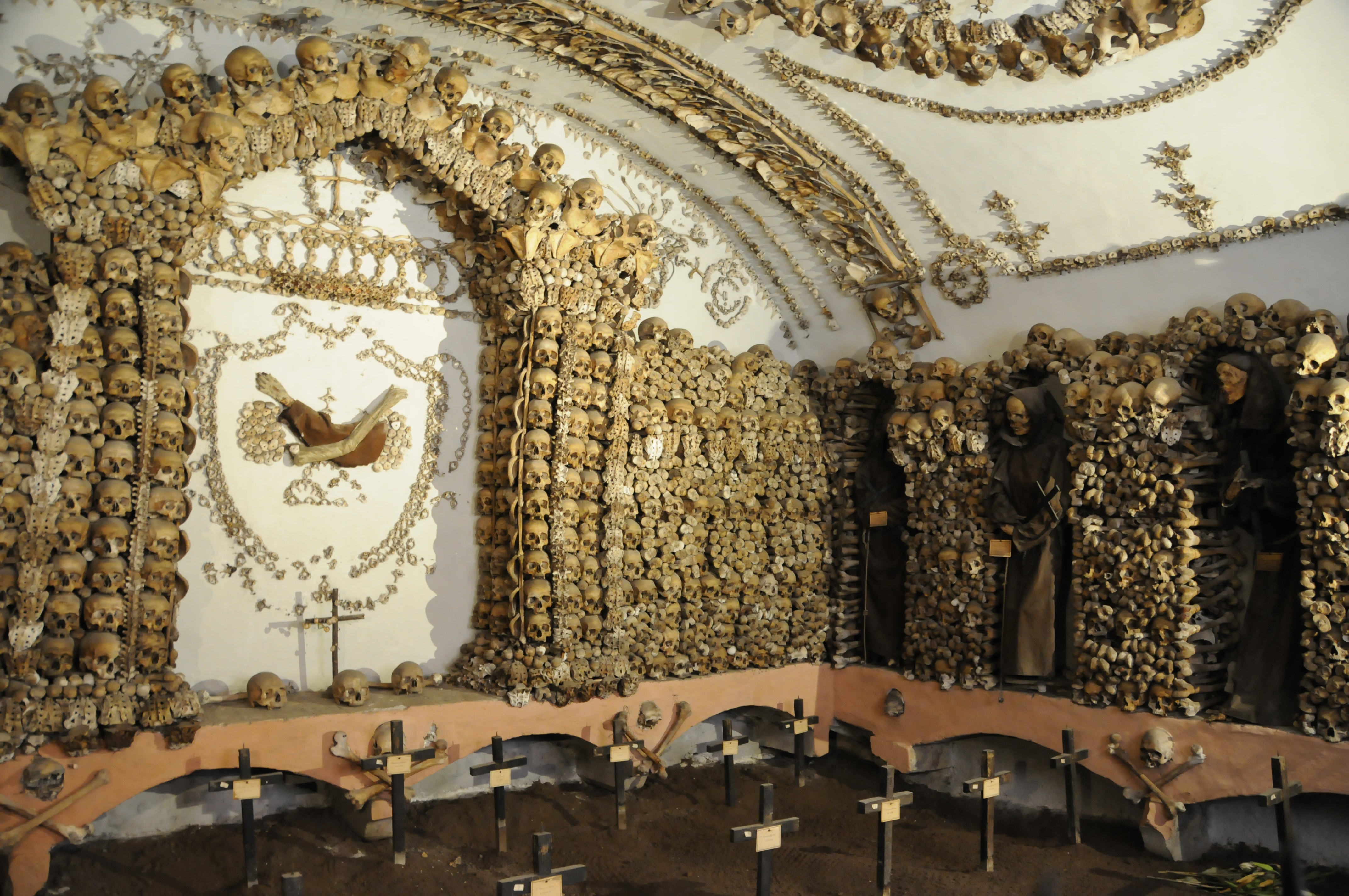 in the clothing that best represents who they were when they were alive. Men in fine suits and women in lacy dresses hang from the walls. It was not unheard of for men and women to visit their assigned places in the crypt before they died. It is reported that they stood in their enclaves for extended periods to get a feel for them.

The most unique element of the Palermo ossario is how well preserved some bodies are, particularly that of the famous Rosalia. Rosalia was a little girl who died of pneumonia in 1920. At the time, an embalmer named Alfredo Salafia knew of a technique for preserving bodies that was similar in effect to the plasticization technique made famous by the traveling Body Worlds Museum. Years ahead of his time, Mr. Salafia died without revealing his secret, but he did preserve Rosalia so that her blond hair and rosy skin looks like that of a normal, living and breathing child.

To see the details of the Ossario, click on the photos to enlarge.

[…] the floor, the candles went out, and the moans of the dead filled my ears… Read more about Visiting Italy’s Crypts Mattie […]

Good day! I know this is kinda off topic but I was wondering which blog platform are you using for this website? I'm getting sick and tired of Wordpress because I've had problems with hackers and I'm looking at alternatives for another platform. I would be great if you could point me in the direction of a good platform.

Hi, We use Wordpress ourselves. We purchased a template that meets our needs, but have been happy with Wordpress.