This year, when trying to beat the winter blahs, why not try something a little different than the typical tropical locations? After all, what better place to cheer yourself up than in Denmark, the official Happiest Place on Earth? 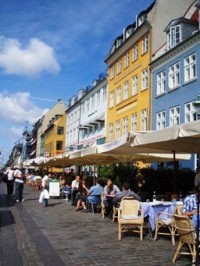 For three years in a row, the World Values Survey has bestowed that title on Denmark. The elaborate survey, conducted over a number of years in countries all around the world, takes into consideration factors such as education, health and welfare.

One major reason for Denmark’s prosperity is that its taxes are sky-high, the government, in return, takes care of all health care and education, making for a stable and comfortable social care system.

If being the happiest place on Earth isn’t enough, Denmark also ranks as the world’s least corrupt country, the second most peaceful country, and it has the highest level of income equality. Furthermore, it was the first country to legalize pornography and to grant same-sex couples nearly all of the rights of marriage.

The Danes have it pretty good. But does any of that happiness and goodwill rub off on their tourists? During my first four hours in the country, I didn’t think so. The country is bigger and harder to get around then I had imagined, so while grabbing a cheap flight into a nowhere-town such as Billund originally seemed like a good idea, I spent much longer than planned on buses and trains trying to get to Copenhagen. But as soon as I got my first look at the charming capital, the happiness started to seep in. 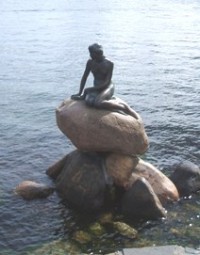 Copenhagen’s attractions are pleasantly wholesome, beginning with the city’s most famous icon, The Little Mermaid. It dates back to 1913 and was inspired by a ballet about the fairy tale. It has become famous over the years for being vandalized, having her head cut off twice and being covered in paint several times.

The Little Mermaid is a surprisingly little statue – less than 2 metres high – out on a rock in the harbour. Without the swarm of snap-happy tourists, it would be hard to spot. Most locals will advise skipping it entirely, but it’s an inevitable must-see and the statue – or just the fact that you walked for ages to see it – is bound to make you chuckle.

Strolling through the different boroughs of Copenhagen, recently named the World’s Most Liveable City, or riding a bicycle as most locals do, brings all sorts of surprising delights. Grab a hot dog from one of the many vendors to save money, shop in Osterbro, visit the ethnically-diverse Norrebro, visit one of the many museums and galleries, marvel at palaces and churches in Frederiksstaden, play in the gardens of Rosenberg Castle, or visit the self-governing hippie commune in Christiania. Copenhagen is a perfect place to wander because there is something new around every corner. 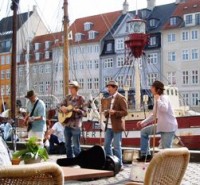 On a sunny afternoon, one of the best places to hang out is on the harbour in the Nyhavn area. Singers line the street, playing for people sitting at outdoor cafés and eating Denmark’s specialty: open-faced sandwiches called smorrebrod.

Locals and tourists sit along the harbour with cans of beer, watching boats glide by against the backdrop of vibrantly colourful houses across the water. Choose a sound you like and a restaurant to go along with it, and you’ll probably end up spending more time than you planned there. 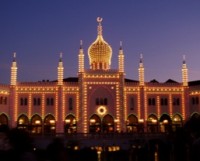 The perfect end to any day is a visit to Tivoli Gardens. Not many other cities can boast an amusement park that adds to its natural beauty, but Tivoli Gardens, dating back to 1843, is one of Copenhagen’s most beautiful sights. There are rides, including the world’s oldest wooden roller coaster, games, twinkling lights, outdoor concerts and theatre productions.

On most nights you can catch a ballet or musical adaptation of a story by Hans Christian Andersen, Denmark’s most famous son. A country that produced the author of so many beloved children’s stories must be a friendly place.

Denmark isn’t the cheapest place to visit. Like the rest of Scandinavia, it’s far more expensive than the rest of Europe and paying ten dollars for a beer can hurt. It’s certainly not Europe’s warmest country, it’s not known for its delicious food or beautiful beaches, and its media have recently come under international fire for their questionable sense of humour.

But there is an infectious innocence in Denmark. It is stimulating, friendly and fun and before long, you’ll understand why the locals are so happy to be there.

Copenhagen is wonderful, it's a pity everything is SO expensive!