In his novel, Hyperion, which follows the adventures of an American traveler in Germany, Henry Wadsworth Longfellow states, “beneath me flows the Rhine and, like the stream of time, it flows amid the ruins of the past.” There is a section of the Rhine River that flows through the wine-growing region of Germany in the Valley of the Loreley that Longfellow must have had in mind when he composed those words. Between Bingen and Koblenz around forty cliff-top castles overlook the Rhine. Some castles are even situated in the middle of the river. Today, the B42 roadway (Bundesstraße 42 ) runs adjacent to the river, mere feet from the water’s edge and provides one of the most scenic journeys in all of Europe.

Loreley Rock on the Rhine River

Many of the riverside fortresses are now in ruins, but there is one remarkable medieval castle that has uniquely survived the wars, feuds, and neglect that have destroyed all the other neighboring castles. Follow the B42 into Braubach (outside of Koblenz in Rheinland-Pfalz) and you will immediately encounter the impressive fortress of Marksburg, which towers over the small village. 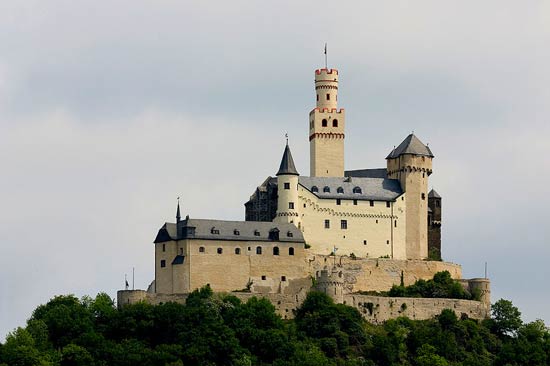 Marksburg is the only castle on the Rhine that has never been destroyed in all of its almost 900 years of history. Its strong location and extensive defenses may have helped to preserve the castle, but it’s more likely down to a bit of good luck that it made it through the middle ages, Napoleon, and two World Wars almost completely untouched. The only recorded damage came from American artillery fire during the final stages of World War II. 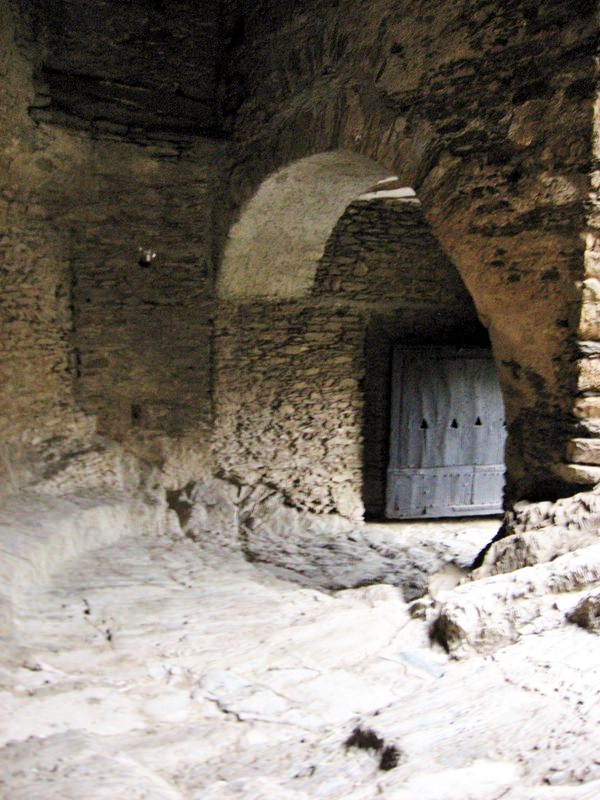 The castle keep (entrance) is the oldest part of the castle and dates to the 12th century when the castle was controlled by the Lords of Eppstein, an extremely powerful medieval family. The castle keep is the same today as it would have been in the 12th century. The uneven rocky surface and dim cave-like appearance suggest that the castle framework was erected directly on the stony hill without any alterations. Coats of arms line the stone wall of the keep, which illustrates a brief history of the castle and its previous owners. 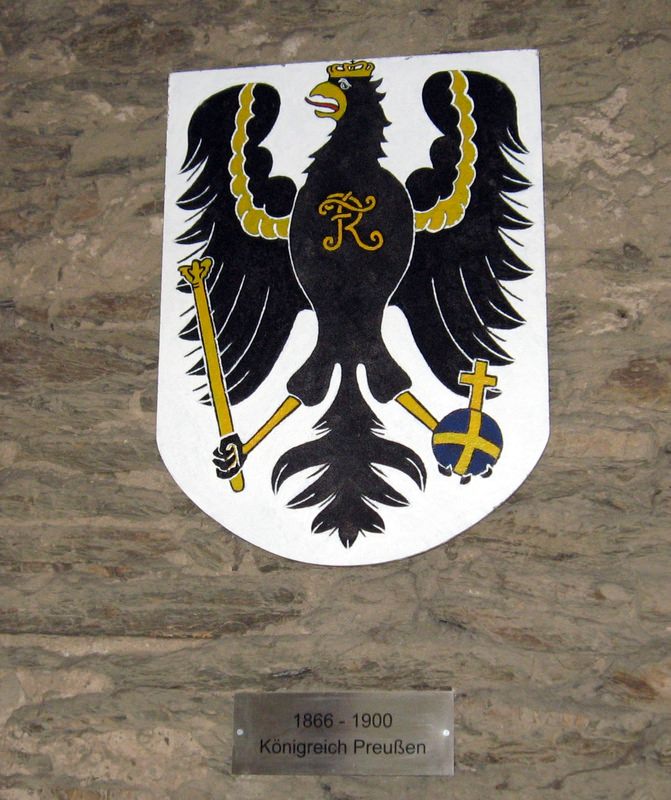 Through the middle ages the castle passed to the wealthy Katzenelnbogen counts and then to the Landgraves of Hesse. These aristocratic houses transformed the simple early construction into the towering fortress that exists today. In fact, most of the castle components can be traced to between the 12th and 15th centuries. Napoleon briefly used the castle as a prison and in the late 19th century Marksburg became a part of the Prussian empire after the Austro-Prussian war. Kaiser WilheIm II ultimately purchased the castle in 1900 on behalf of the German Castles Association and Marksburg remains the headquarters for the organization to this day. 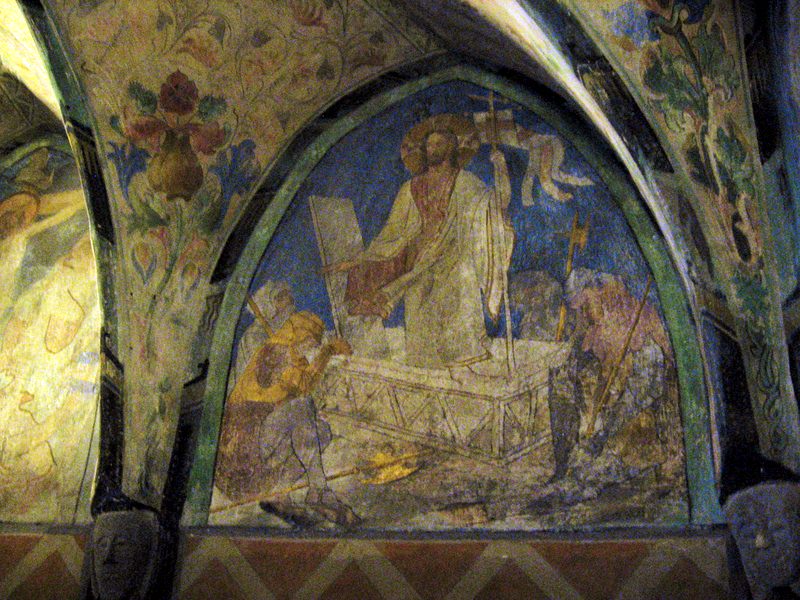 The castle can only be visited by guided tour. Tours are given in German, but guidebooks in multiple languages are available and are very easy to follow. The tour will take you through the kitchens and dining area, battlements overlooking the Rhine, chapel, bedrooms, and torture room. The torture room contains period devices, but is actually located in the castle stables. For all of its existence, the castle peacefully changed hands amongst ruling powers and, despite its brief tenure as a prison, there is no record of torture ever being used in the castle. The highlight of the tour is the exquisitely preserved medieval paintings in the dining area and chapel. The great majority of European castles have required heavy restoration and it is rare to find well-preserved original wall paintings with such vibrant colors and detail. The views of the Rhine river and surrounding hills from the height of the castle battlements are especially beautiful. 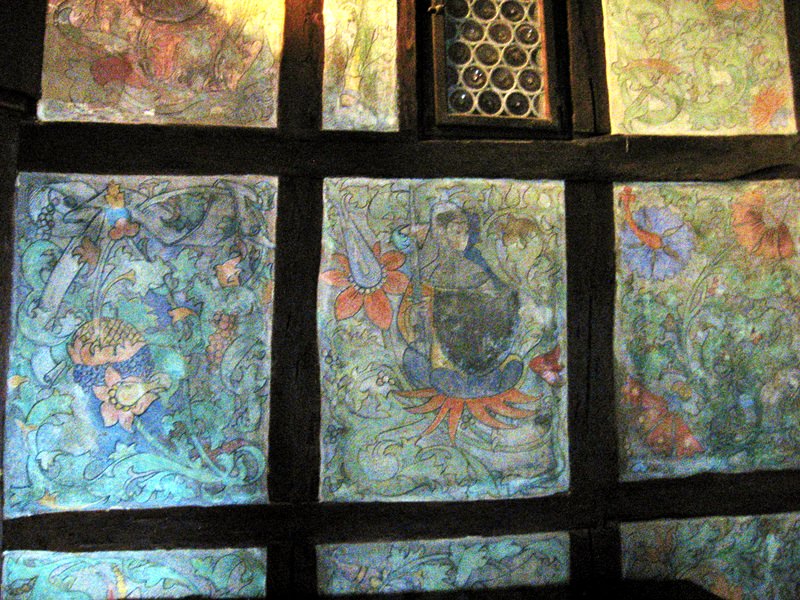 After touring the castle, walk through the medieval streets of Braubach. Many of the timber-framed houses date to the late middle ages and display amusing sayings in tribute to the wine-growing heritage of the village. Be certain to stop at the Café Maaß before leaving Braubach. This combined bakery and café offers the best of traditional German cakes and coffee. I tried the chocolate cream cake and Kaffee Haag, which is a special decaf coffee that has a very peculiar and almost sweet taste. It is very different from regular coffee and decaf products from other countries, but is worth trying for the experience. Like marmite, many locals either love it or hate it. 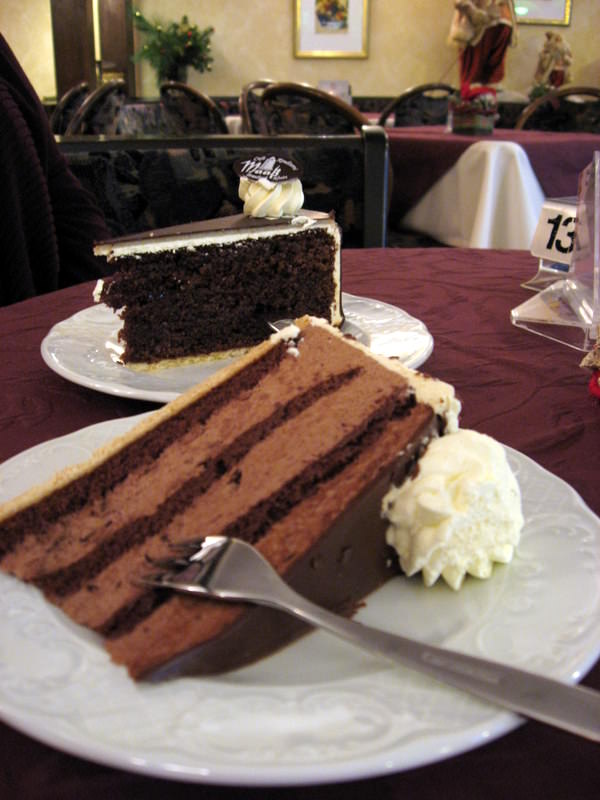 Cake and coffee at Cafe Maaß

With over forty castles competing for space along the mid-section of the Rhine River, visitors are spoiled with some of the most memorable scenes in all of Germany. Marksburg and the charming village of Braubach make an excellent day trip during your stay in the Rhineland. 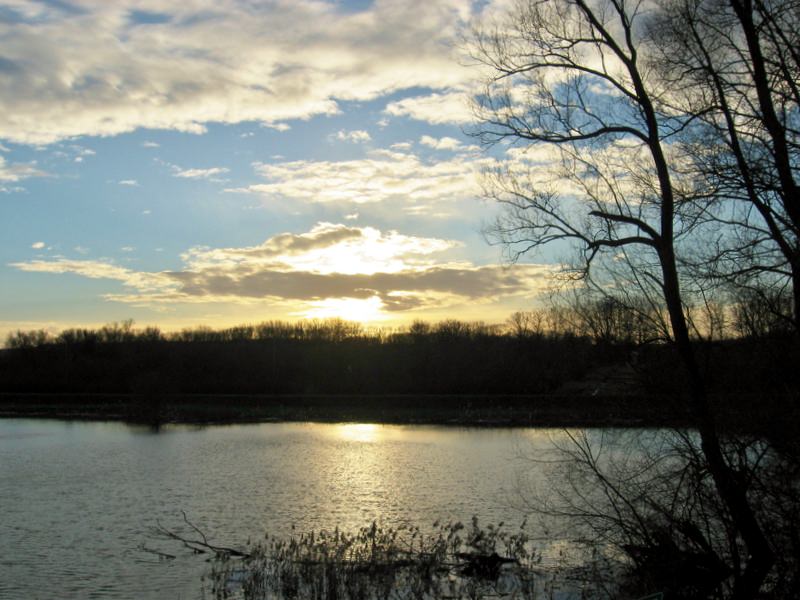 Along the Rhine River at Sunset