Romeo and Juliet may only be characters in a play, but they’ve been supporting a lucrative business in the city of Verona for quite a while. Souvenir shops sell figurines of the romantic, doomed couple and hotel ads quote Shakespeare. Tourists cluster in the courtyard under Juliet’s balcony and pose by her bronze statue, touching her right breast 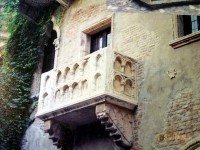 for luck (it’s shiny from all the rubbing). Many scribble love messages on the wall next to a sign that reads, “Please do not deface the walls with graffiti.” 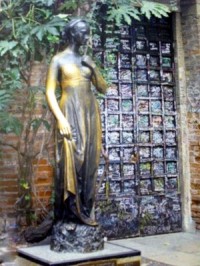 The so-called “Juliet’s house” is open for tours; it’s furnished in the style of 14th century aristocrats. Her reputed tomb lies next to a garden and, perhaps appropriately, a wedding hall.

There is more to Verona than star-crossed lovers. The ancient city, on the banks of the Adige River in Italy’s Veneto region, has great charm, with its interesting bridges and churches, a medieval castle, and café-lined squares. It is famous for a huge Roman arena. Back in the first century, gladiators and jousters performed here; now, big, splashy operas are held in summer. During intermissions, vendors sell wine, binoculars and cushions (you’ll be glad to have one if you’re sitting in the higher, cheaper stone seats).

Our hotel, the Giuletta e Romeo, was quiet and convenient, with 30 rooms in the historic center just 50 meters from the arena. Our room was comfortable, the breakfast an ample buffet, and the service exceptional. We happily followed the staff’s suggestion of lunch at Antica Trattoria dell’Amelia, where we enjoyed antipasti, noodles with finferli (chanterelle mushrooms), chicken in calvados, and wine, all for a reasonable price.

Verona is studded with lovely old churches. You can get a day pass to the five major ones, or buy the Verona Card, covering entrance fees to many attractions and public buses. 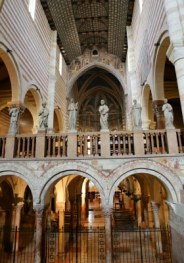 Basilica San Zeno, the most famous church, was named for the city’s patron saint. He came from Africa in the 4th century and is said to have converted the populace to Christianity. The current basilica, built in the 12th century, has the classic Romanesque stone and brick stripes, a lovely 15th century altarpiece, a Rose Window, and numerous carvings and paintings. On one side of the church is a high bell tower from the 14th century, mentioned by Dante in the Divine Comedy. Dante once lived in Verona and his statue stands in Piazza dei Signori.

Verona’s  largest church is St. Anastasia. It is splendid, with elaborate carvings of Biblical scenes surrounding the Gothic doorways and, in the lofty interior, red marble columns, a magnificent painted ceiling, and masterpieces by Pisanello and other great artists. The Duomo, San Fermo, and San Lorenzo are other churches not to be missed, each with its own beauty. For good reason, Verona is a UNESCO World Heritage Site.

When you’re ready for a break from the past, visit the Modern Art Gallery, in Palazzo Forti. Exhibitions of contemporary art are often shown here. Then stop for espresso or gelato in one of the dozens of cafés, or, in the morning, stroll through the busy farmers’ market on Piazza dell Erbe. On a pleasant day, explore the Garden Giusti, a short walk from the town center. It’s a peaceful haven, with landscaped terraces, statuary, a tower, and even a labyrinth, as well as a view from the hilltop.

Verona is both a tourist and business center, with a conference center, many hotels and worthy restaurants.  We liked our quiet lodgings, but also attractive is Hotel Trieste. It’s close to everything in the historic center, the rooms are well-kept, and the staff is welcoming and knowledgeable. And there’s an underground parking garage.

For a restaurant splurge try Il Desco, a pretty place with tapestries and paintings and an intriguing menu. You can order the “tasting menu” of small dishes such as lobster soup, black spaghetti with squid, and suckling pig. If you’re more venturesome than I am, try the fried calf’s brain with tripe sauce, or the bull testicle soup. They are probably wonderful.  I’ll go for the dessert: apricot mousse with almond ice cream and macaroons.

Simpler and cheaper are the trattorie and osterie scattered throughout the city. Often they serve foods traditional to the Veneto region, with gnocchi a common dish. Risotto, tortellini, and fish fresh from Lake Garda are typical.

Close to the Duomo, Al Duomo is a restaurant nicknamed ai mandolini. A group of mandolin players often performs, and musical instruments are displayed. Pasta is popular here, as well as grilled vegetables and meats.

Walk off your meal with a stroll to a bridge, Ponti Scaligero, where you’ll have a good view of the town, Adige River, and Castelvecchio. The castle was a massive fortress in the 14th century, and now is a museum where you can see art treasures – sculpture, paintings, ceramics, statues, and more.

The most interesting of the tour in Verona is the time to see and read thousands of paper stuck to the walls of Juliet's house with a variety of requests. That is the most unique..