Flanked by lush valleys, tree house hostels and hammocks galore, there’s no better place in Turkey to light up the nargile (water pipe) and wile the hours away in an Ottoman than the cosy, coastal, hippy hamlet of Cirali (aka Olympos).

Perched in secluded mountain valleys fifty miles Southwest of Antalya, networks of makeshift, wooden tree shacks are the drawcard novelty of Olympos, providing a rustic and highly unconventional accommodation standard for those willing to live like an Ewok for a night or two. 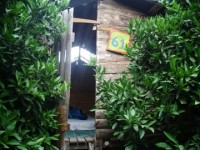 Arriving fresh from a four day cruise across the Western Mediterranean coast, four nights sleeping under stars and sail were now replaced with a stiff mattress in a tree house – not the most comfortable night’s slumber, but certainly a fine oddity to write home about. Roaming chickens keep you up at night, and moonlight seeps through shonky wood planked walls. 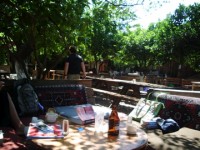 The tree house pensions are popular and generally provide a free buffet dinner. I stayed at the famous Bayrams, but Kadirs is also considered up there with the best of the bunch. For the less budget conscious, a range of more conventional hotels is on offer. I might have opted for the Canada Hotel Cirali if my back pocket allowed for the extravagance.

Olympos is steeped in ancient myth and Hellenistic fable. Founded sometime around 2 BC, it was an early base of the Lycian civilisation which eventually crumbled and conceded to Roman and Byzantianian influences. The philosopher Cicero once referred to Olympos as a city of fine art and resplendent riches. 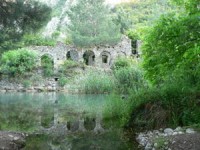 The former glory is well passed, however ancient ruins from the early civilisations still remain just a short walk along the dirt track leading out of town. We went exploring and took a hike, taking in the scattered fragments of Lycian sarcophagus, stone artefacts and former bathhouses, festooned with overgrown vines and scrub. The rewarding and mythic twenty-minute trails lead to an untarnished and idyllic beach cove, perfect for kicking back and soaking up the Turkish sun. 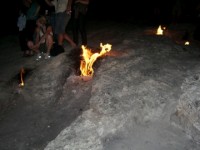 The ancient Lycians worshiped the fire God, Vulcan, which was most likely due to the impressive naturally occurring phenomenon, the ‘Chimera’ – a series of eternal flames that flare perpetually from a nearby mountainside. Located roughly 15 km outside the Olympos village, we took an evening bus to the site, witnessing the mesmerising natural wonder, it’s red and amber flames sparkling in the dark of night.

The Lycians believed that a mythic underground beast with a lion’s body and snake for tail was responsible for the phenomenon, however, the flames are really the result of natural gas rising from the ground and igniting spontaneously when coming into contact with the air. 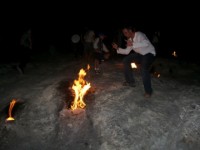 Centered in the heart of Olympos coastal national parkland, Olympos is also prime terrain for the environmentally adventurous, conducive to a range of outdoor activities including sea kayaking, mountain biking, rock climbing and trekking, with equipment readily available from various hostels and stores throughout the village.

With its gem coastline, mythic feel and proclivity to extended relaxation, Olympos provides an ideal stop off the beaten Western Turkey tourist track. And if the tree house life floats your boat, a few nights might easily become a few weeks.