I’d read a lot about Piran, a coastal town just across the border in Slovenia, and wanted to sample its high quality traditional foods such as seafood, olive oil, wine, and salt. I hopped on a bus headed for Umag, a town near the Slovenian-Croatian border. The towns got smaller and smaller as the six-hour ride progressed, and the bus driver 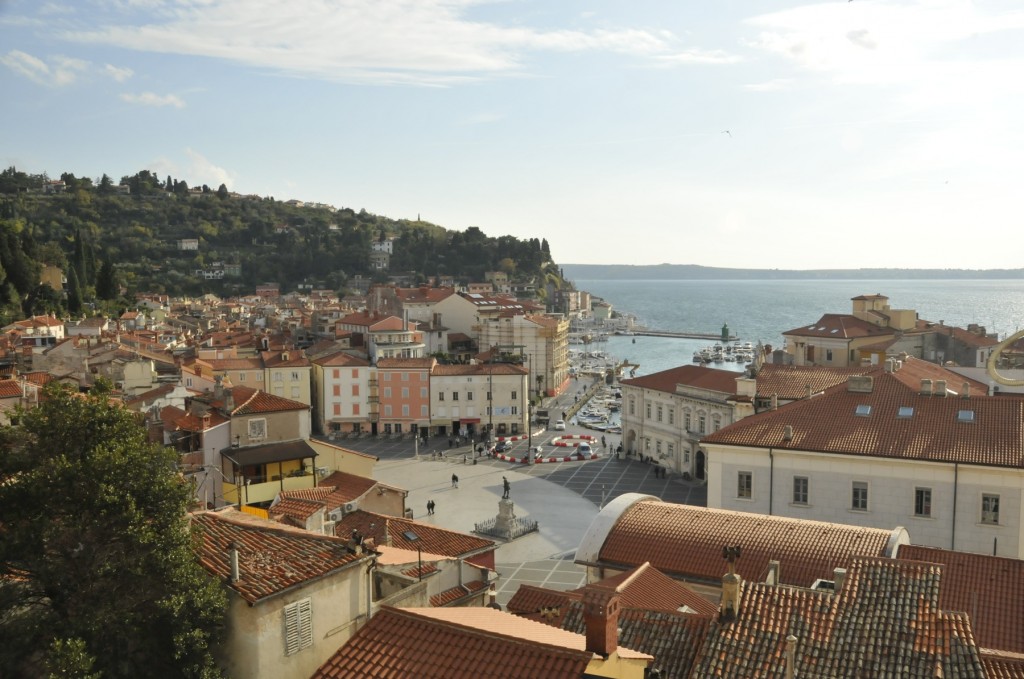 began delivering mail, as though he wanted to prove to me just how isolated the towns were. Umag, unfortunately, was not my final destination. I hadn’t been able to find any information on getting to Piran from Umag, and as the bus ride continued I felt as though I were riding straight to a dead end. It was dark when we pulled into the Umag, and the bus station was nearly deserted. A couple of locals told me that the last bus to Piran had left. Luckily, a single taxi idled nearby, and a friendly Croat named Boris drove me the last 14 miles to my hotel, the grandest in all of Slovenia, the Kempinski Palace Portoroz.

If you find Germany too organized, and Italy too disorganized, then Slovenia is the perfect place for you. It borders Italy, Austria, Croatia, and Hungary and has a total population of 2 million. Even though it’s a small country, the landscape varies wildly, from the shores of Lake Bled to the Goriska Brda wine region that borders Italy’s Friuli wine region. 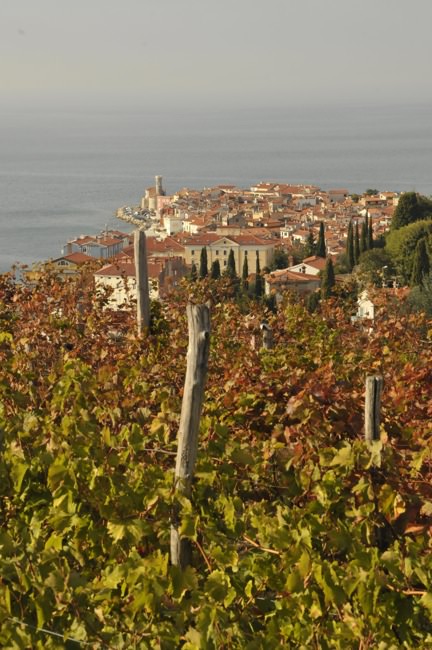 The small town of Piran is dramatically situated on a peninsula surrounded by turquoise waters. I walked along its seaside paths and cobblestone streets, admiring the Renaissance churches as I went; my main goal was to find good local food. Piran grew up on salt and olive oil, and it has been a culinary and therapeutic destination for centuries. My first meal began with a fish soup prepared using the consommé method, followed by a cuttlefish risotto. The flavors of these traditional foods were very similar to those of Croatia, which made sense: Piran is located on the northern coast of the Istrian Peninsula. The culinary culture of the Croatian Istria and the Slovenian Istria clearly had no borders.

Salt might not seem like the most exciting cooking ingredient, but Piran taught me otherwise. My guide for the day, Tina Perkic, explained that the local soil composition creates one of the most highly prized salts in the world: la fleur de sel sorts, the flower of the salt. It has the unique quality of tasting first salty then finishing sweet. To prove it, Tina handed me a dark chocolate with sea salt, which is definitely one of Piran’s culinary highlights. 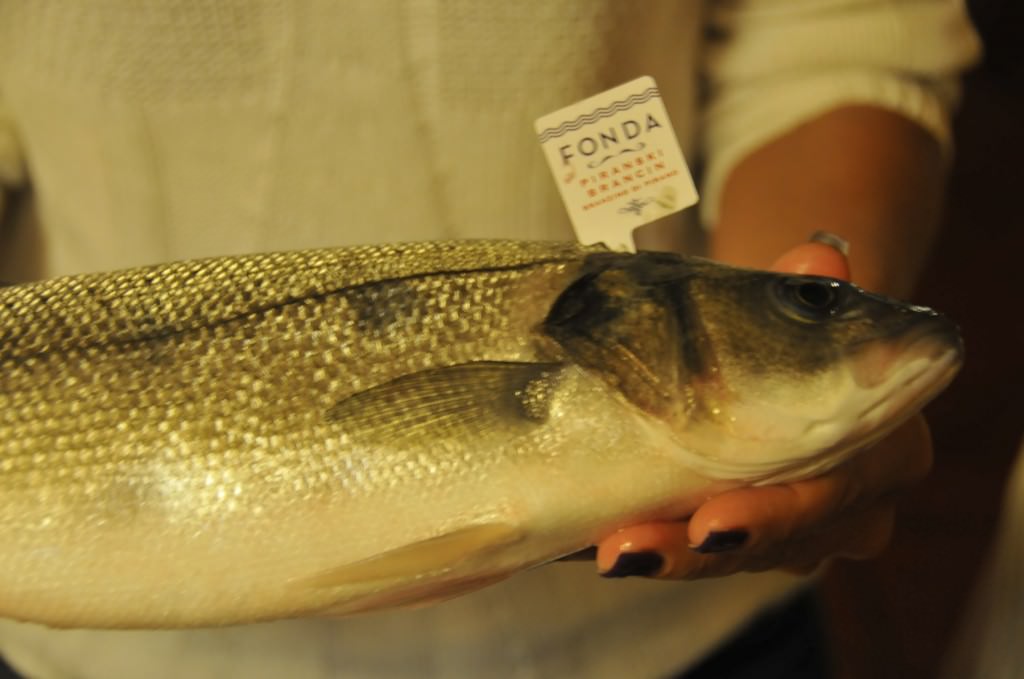 After a quick, rain-drenched tour of the town, we went to Casa del Sale, where Irena Fonda, whose family owns the Fonda Fish Farm, taught me how to prepare fresh sea bass carpaccio. The Fonda Fish Farm produces, if not the best, one of the top farmed sea basses in the world, and Irena carefully sliced the raw fish, then topped it with local olive oil and fleur del sel sorts. Eco-friendly and low in mercury, Fonda sea bass is another delicacy of Piran, and I highly recommend visiting the fish farm, which is located near the National Park of Piran Salt Pans.

We couldn’t finish the day without local wine, and Tina took me to Mahnic Winecellar and Restaurant, which bustled with the festivity of an Austrian beer hall. Blood sausage and schnapps were not served, but we were served wine, local olives, prosciutto, and cheeses. “Slovenia’s national anthem is a drinking song,” said Ingrid Mahnic, Chairwoman of the Association of Winegrowers of Slovenian Istra and owner of Mahnic Winery. Ingrid makes wines using the muskat, malvasia, teran aka refosk grapes. She handed me a glass of dry rosé and the fire crackled and someone began playing an accordion. Life on Slovenia’s 29-mile coastline was good.

In my next travelogue post, I head to Goriska Brda, one of Europe’s most important and least publicized wine regions. 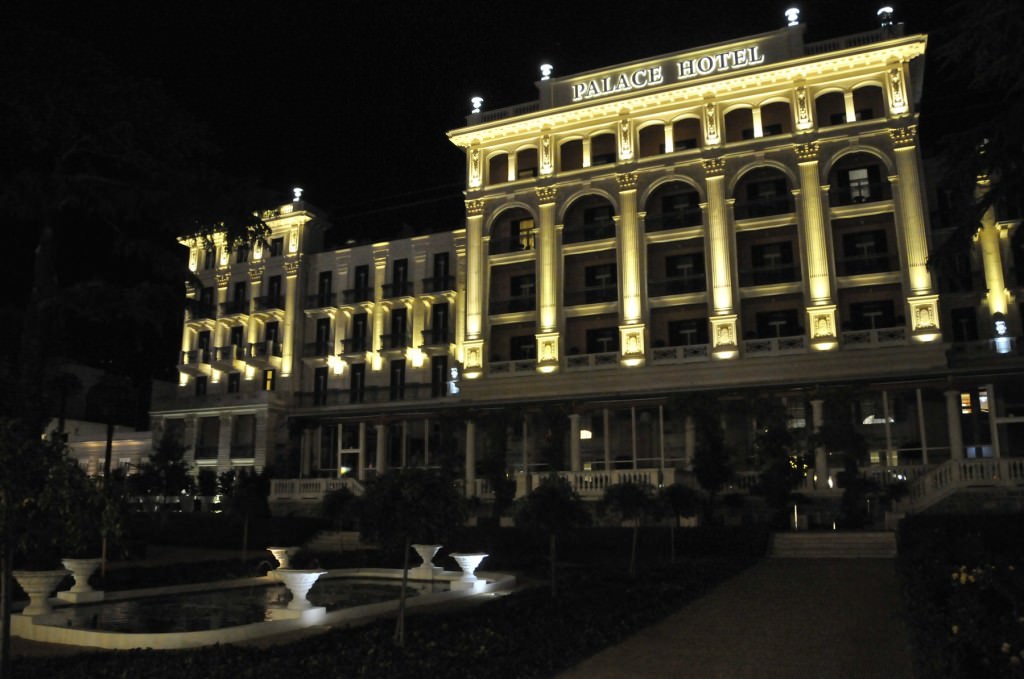 Built in the days of the Austro-Hungarian Empire, this historic five-star hotel added a new wing in 2008, combining modern and classical architecture. The spacious rooms feature a unique line of furniture, designed by the French designer Jean Claude Laville and inspired by the area’s native roses. The hotel is located in Portoroz, famous for its salt spas, and it is a 30-40 minute seaside stroll to Piran. For luxury travelers, this is one of the best options in all of Slovenia. Value-focused travelers might also want to try this hotel, as it is one of the least pricey Kempinski hotels, yet features the same quality of service as every other Kempinski hotel. There are three restaurants, three bars, including a cigar bar, a healing spa that features the area’s famous salts, and a salt-water pool that is both indoors and outdoors. The hotel’s amenities are open to the public, so travelers can drop in for lunch or a massage.
Obala 45

Ivo – $$
This restaurant may look similar to those on the nearby Presernovo Nabrezje strip, but it always serves fresh–I repeat, fresh–seafood, and its prices are lower than most.
Gregorciceva 31 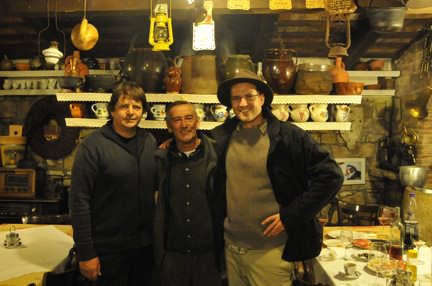 Cakola Caffe and Wine Bar – $
If you aren’t going to visit the nearby wineries, this is a great place to sample local wine. The atmosphere is laid back, and the staff is friendly and knowledgeable. Local wines served by the glass. Cheeses and other snacks, too.
Partizanska 2

Mahnic Wine cellar – $$
This place is the real deal. Old folks drink wine made on-site while owner Ingrid Mahnic makes sure everything runs smoothly. I didn’t get to try the main dishes, but the cured meats, cheeses, and marinated olives were all produced locally. Travelers can visit for a complete meal or just to taste wine with local meats and cheeses.
Dragonja 111