First off, the Norwegian coastline is absolutely filled with picturesque villages, the most breathtaking natural scenery imaginable and ancient cities. This coast is

spectacularly long—it extends for more than 25,000 kilometers (15,500 miles) from the Swedish border in the south to the Russian border in the far northeast. As great as that sounds, the downside is that you’ll most likely have to carefully pick your destinations when visiting Norway—not everyone has the luxury of taking a month or two off of work to explore a country. The upside is that there’s a lot to choose from.

The following list features several amazing coastal attractions in Norway, but it’s by no means exhaustive. There’s so much more to see. The list, however, does include many of the major highlights in Norway, places that you should definitely make a priority when visiting. 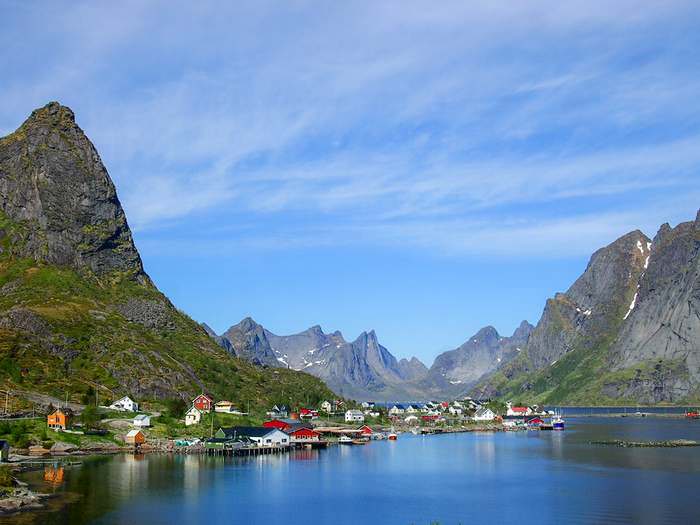 This is the beautiful town of Reine in the Lofoten Islands.

One of the greatest ways to travel around Norway is by Hurtigruten boat. The Hurtigruten fleet consists of several ships, formerly just post and freight boats, which now also serve as cruise boats. They travel along the Norwegian west coast all the way from Bergen to Kirkenes and back, stopping in dozens of coastal villages and towns on the way, places that, previously, in winter could hardly be reached in any other way. 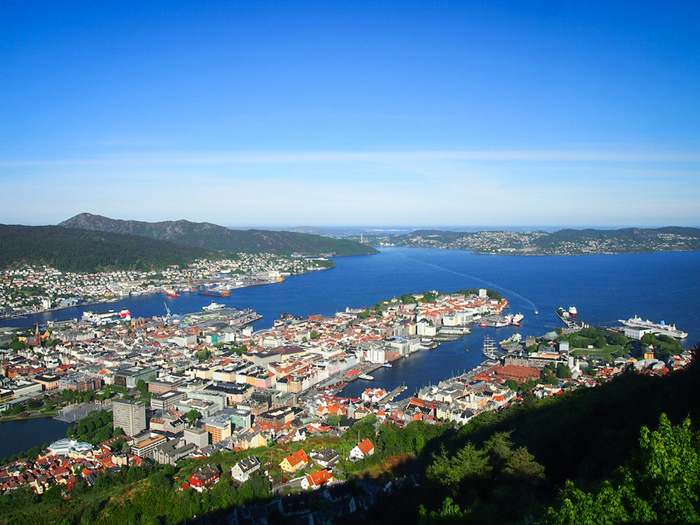 View of Bergen from one of the seven hills

Bergen is Norway’s second largest city. This is where the Hurtigruten ships depart on their long voyage to the Arctic Circle and beyond. The city is surrounded by seven hills and lies on the shore of seven fjords, making it one of the most stunningly located cities in northern Europe. As a historic Hanseatic city with a long history of seafaring, Bergen is home to an absolutely magnificent waterfront and a fantastic fish market. 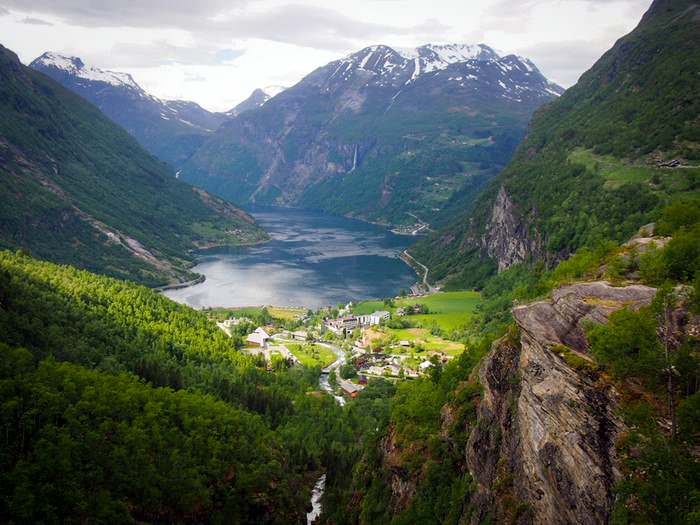 There are more than a thousand fjords in Norway, but one of the most beautiful is the epic Geirangerfjord, a fjord that’s sometimes called ‘the king of all fjords’. It is named after the tiny village of Geiranger that sits at the fjord’s end and is home to sheer cliffs and some of the most majestic waterfalls in Norway. 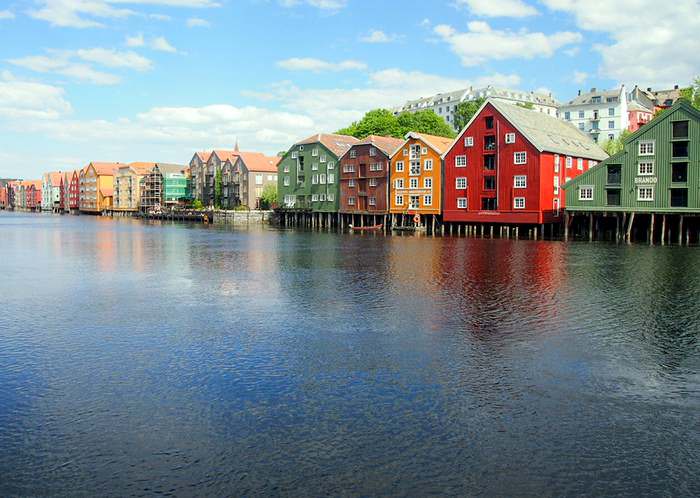 Colorful houses along the Nidelva River in Trondheim

When the Vikings ruled Norway and the rest of Scandinavia, Trondheim was their capital. This thousand-year-old city, which in its long history has also been called Kaupanger and Nidaros, is still overwhelming beautiful. Its old city center consists of picturesquely colored wooden houses that line the Nidelva River, a fortress and the enormous Nidaros Cathedral, which used to be the most important pilgrimage destination in northern Europe in the Middle Ages and is now the northernmost medieval cathedral on earth. 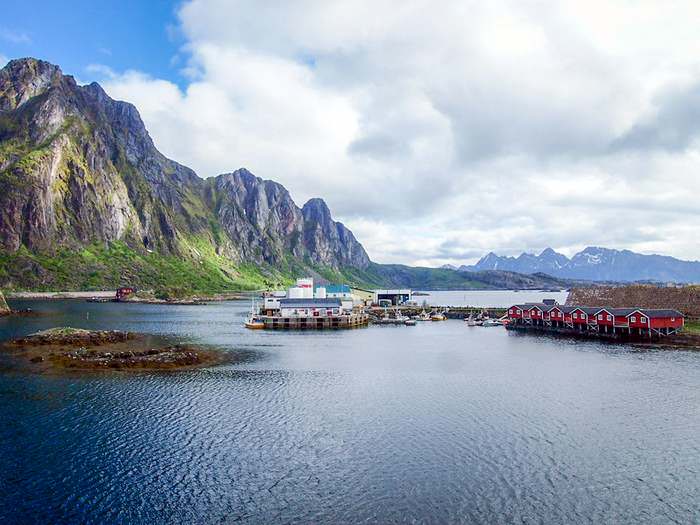 Svolvær is the main city on the Lofoten Islands archipelago in northern Norway, already well north of the Arctic Circle. The archipelago is easily one of the most spectacular regions in the entire world, made up of several islands with rugged spines of sheer mountain peaks, coastal meadows and incredibly photogenic bridges. 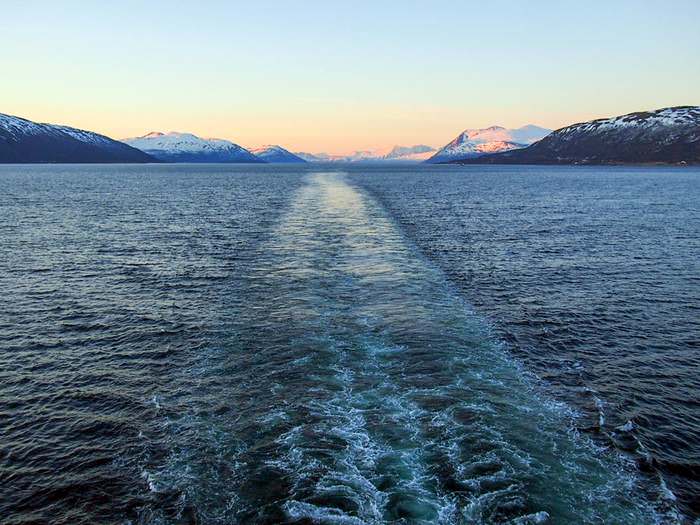 Steaming through the ocean toward Tromsø, far north of the Arctic Circle

Situated on an island about 350 kilometers (217 miles) north of the Arctic Circle, Tromsø is the largest city in northern Norway. It is well-known for its many churches, including the famous Arctic Cathedral, and for its number of old historic wooden houses. Tromsø is a bustling place in summer, and is home to a large university and a few popular music festivals, while in winter it is one of the best places in the world to see the northern lights. 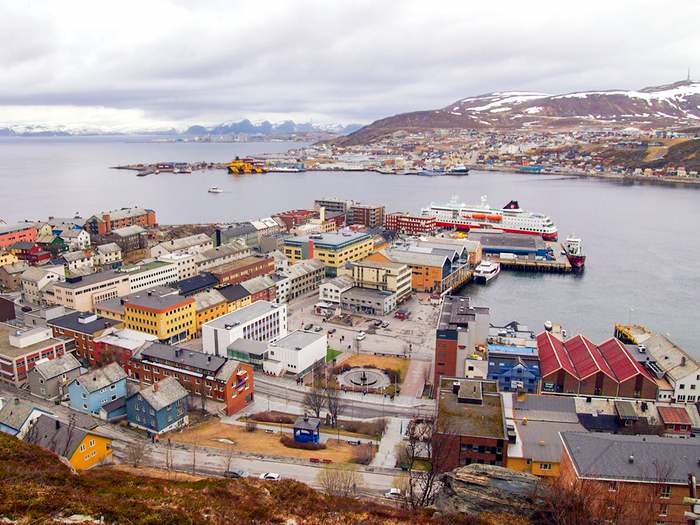 A Hurtigruten ship at its dock in Hammerfest

As a center of commerce and transportation in the far north of Norway and Scandinavia, Hammerfest has been a strategic place in many wars, from the Napoleonic Wars to the Second World War. Nowadays, there are still many batteries and bunkers in the area. Additionally, Hammerfest and the fertile waters of the Arctic Ocean are a great destination for fishermen and even scuba divers. It is also a popular hiking destination is the northernmost glacier in Norway. 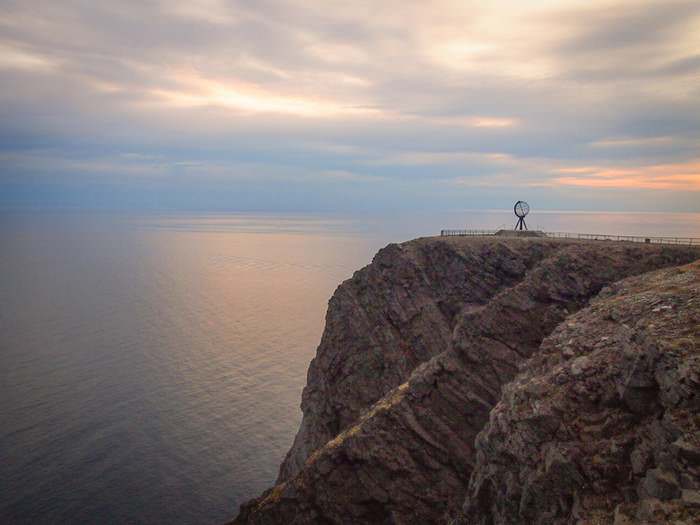 The Hurtigruten doesn’t actually stop at the North Cape, the northernmost point in Europe that can be reached on wheels, but in the town of Honningsvåg. Honningsvåg is officially the northernmost city in Norway, even though its population doesn’t exceed 2,500. It’s located at latitude 71°N, which is comparable to northern Siberia or northern Alaska. Despite this extreme northern latitude, many gardens in town have plants and even trees. This is due to the warm influence of the Gulf Stream that heats up the entire Norwegian west coast and makes it accessible to ships and tourists. The North Cape, a huge rocky cliff that rises steeply out of the Arctic Ocean, is located just a short drive north of town.

Written by and photos by guest contributor Bram Reusen for EuropeUpClose.com. Bram Reusen is a freelance travel writer, translator and photographer from Belgium who currently lives in Vermont, USA. Bram’s preferred ways of traveling and getting around are hiking, cycling and road tripping. You can follow his adventures at Travel Experience Live.

A great selection of coastal places in Norway, many of which I have visited myself dufing my extensive travels in Norway. Geiranger and the famous Trollsvejen really bring back fond memories here! The even more picturesque -- but almost totally unknown and unvisited -- places in the Bodø area (just inside the Lofoten islands chain on the mainland) as well as the breathtaking coastal route from Bodø "back" down south should be added as a real "travelers secret" and may help you extend that list by one more great Norwegian travel destination!