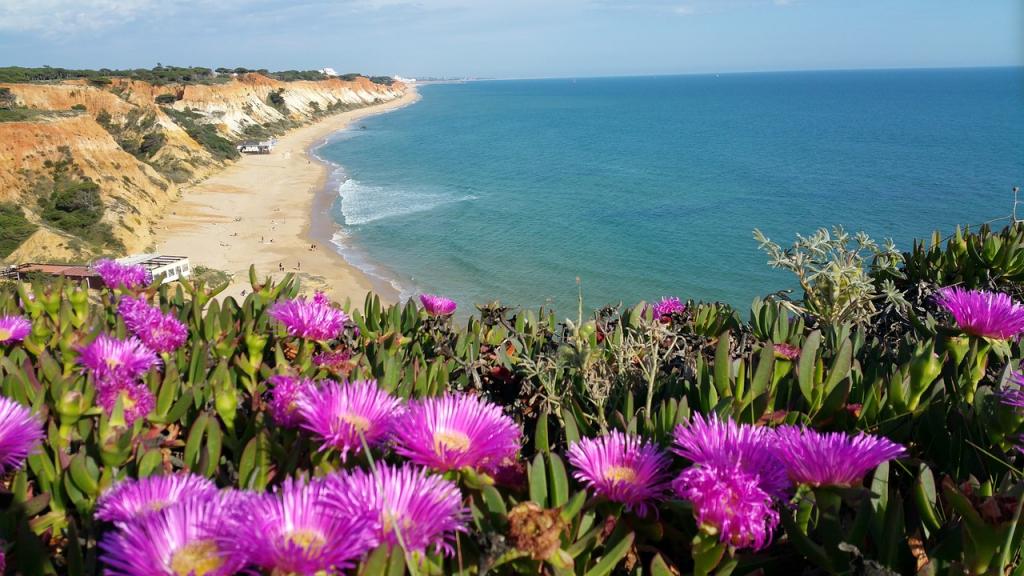 Things to Do in Algarve, Portugal:

3 Day Itinerary from Faro to Lagos

If you are heading for Portugal’s Algarve, you are in for a treat. From the westernmost point of  Cabo de Sao Vicente to Cacela Velha in the east at the border with Spain, you find a cornucopia of sites. Beaches, mountains, thermal springs, cork and ceramics, castles and museums, you won’t know what to do and where to go first. This itinerary will guide you to the best things to do in Algarve in three easy days. Rent a car and start east or west, depending on where you come from.

If you want something a little more relaxed, you can also take a look at these Yoga Retreats in Portugal – many of them are located in the beautiful Algarve.

Things to do in Algarve: Faro

Faro, the administrative capital of the Algarve since  1540, has the most international airport of the region, so you will probably have arrived there. Take your car and drive approx. 60km east to Olaho. Visit the distinctive red brick building of the covered market, a lively place which offers a huge variety of fruit, fish and other local products. 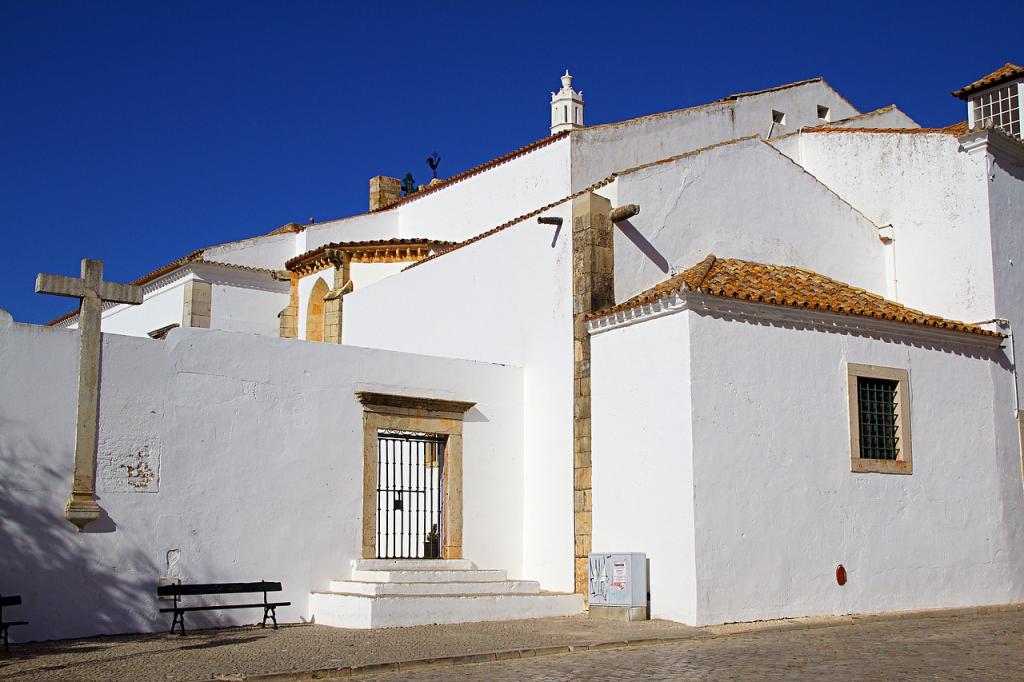 Take the Ferry to Culatra

Then head for the ferry and take a 20 minutes ride along the fabulous lagoon and barrier riff of the river Formosa, heading for the island of Culatra. Click here for the ferry schedule!

Culatra and several other small islands sitting in the lagoon are famous for oyster and clam banks and  migrating birds. On Culatra you will find picturesque multi colored fishermen cottages, a few small restaurants and cafes as well as a sandy beach, protected by dunes and a lighthouse. The entire area is a protected nature reserve, there are no cars on the island, just bicycles and cute little carts in which the inhabitants carry their belongings around.

Take the ferry back and head inland to Sao Bras de Alportel. The place is very well known for its cork industry. You can visit several cork transformation plants, see the process and visit the Cork Museum as well as the colorful Museum of Algarve’s Costumes. Of course, plenty of shops sell cork products, my favorites being handbags and sandals. They also produce honey and jams presented in lovely jars, all of which make for great and inexpensive souvenirs. 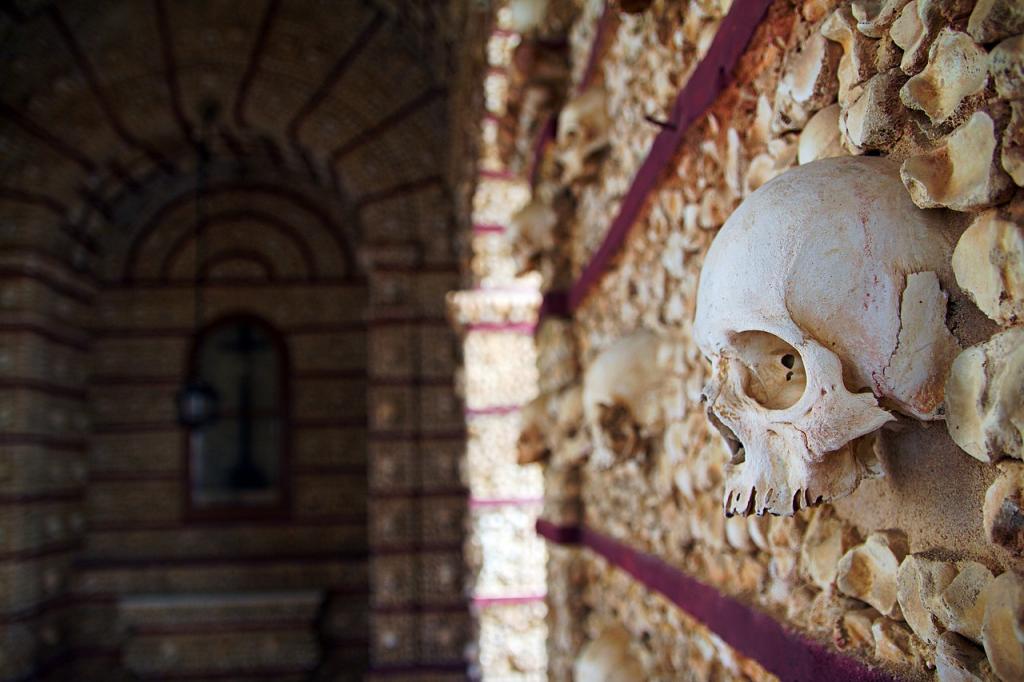 Back in Faro, walk through the old town, along cobblestoned small streets, many of which are pedestrian zones. Visit the Gothic cathedral, but what you must not miss is the Chapel of the Bones at the back of the 18th century Church do Carmo. The church has a baroque façade and a beautifully decorated interior. Follow the signs and enter the macabre world of the Chapel of the bones. Made from the bones and skulls of over 1000 monks who were exhumed from the overflowing cemetery, you might want to contemplate the words which are written above the entrance: Look and think what lies ahead for you.

Back in the sunshine stroll along the waterfront with many yachts and the ancient city walls at your back.

All that walking and the fresh sea air will have made you hungry and it’s time for a delicious local dish: cataplana, a seafood stew. In the evening you can listen to the melancholic songs and guitar music which are Fados, Portugal’s traditional songs. In a pleasant atmosphere, you can also eat and drink at Wine and Fados. 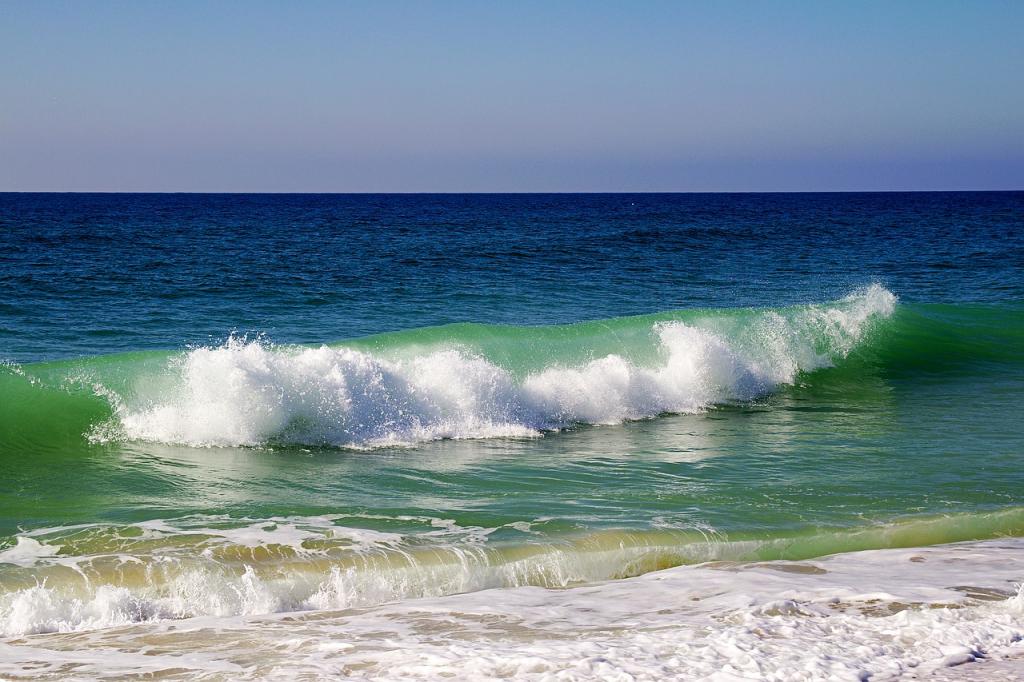 Where to Stay in Faro

A good choice is Hotel Eva with views of the waterfront and within walking distance of the old city.

Where to eat in Faro:

Faro has a choice of great restaurants where you can taste the local specialties, mostly fish, but you can also have meat or vegetarian cuisine. Take your pick.

Things to Do in Algarve – Albufeira & Carvoeiro

Start your day with a drive west along the coast passing through the best known and popular town of Albufeira. Admire the best beaches in the Algarve, which often form small coves and the distinctive rock formations of red cliffs at Falesia Beach. Because it’s a very touristy area, I have chosen the fishing town of Carvoeiro as a place to spend the night. A few miles inland you find the marvelous Vale d’Oliveira Quinta Hotel and Spa which also makes a good starting point for exploring this part of the Algarve.

On the 2nd day, you will really appreciate the beauty of Algarve’s nature, experiencing the striking contrast between mountains and the sea and beaches. Take your walking shoes with you as well as your swim gear. 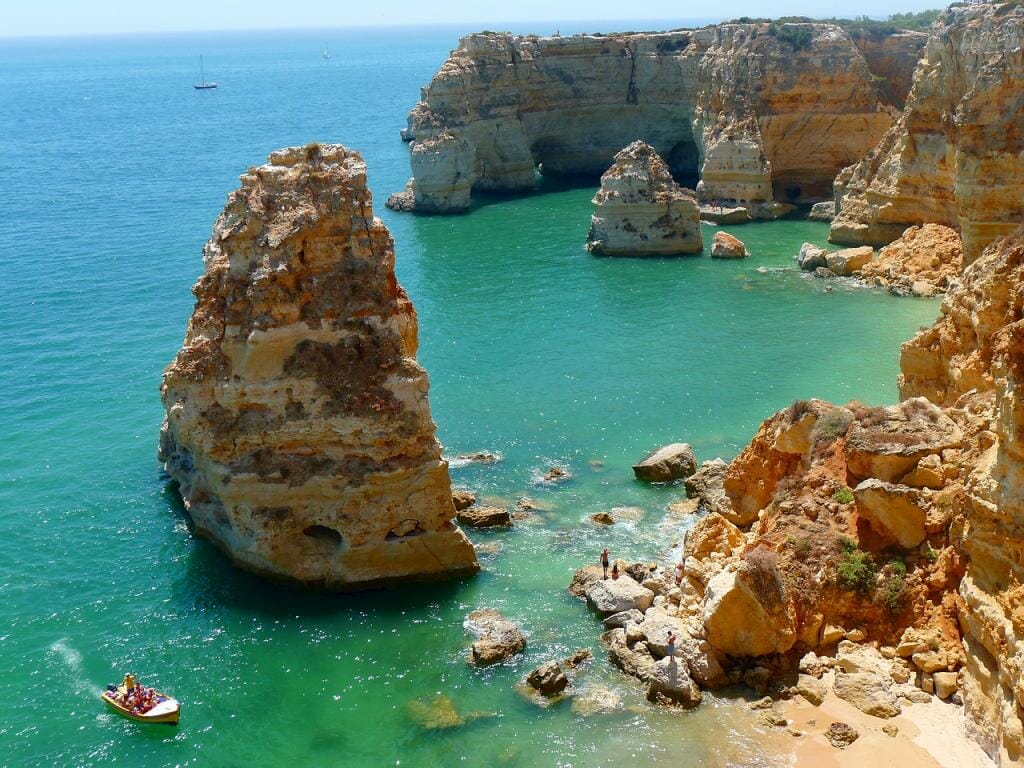 In the morning head east and then north to Algarve’s mountains,  the Sierra de Monchique. The distance is approx. 40km but it’s on winding roads, so take your time. Along the way, you see the volcanic origin of the area in the form of frozen lava slaps which reach down to the road. The sides are lined with many stalls and shops selling the famous blue Portuguese tiles.

You arrive first at Caldas de Monchique which are the numerous hot springs typical for the area. About 10 hotels and spas have been constructed around them. The springs are in use since the times of the Romans and beneficial to sufferers of rheumatism and asthma.

A few miles further on, you are in Monchique proper and park at the tree-lined town square. Getting around is via steep and cobbled alleys with many steps in between, hence the walking shoes. Admire the white houses with their blue door and window frames and their distinctive chimneys, called ‘skirts’. Another pottery, indicated by the sign ‘atelier’ is worth a visit because it’s also an ancient house where the family of artists live and produce their wares. 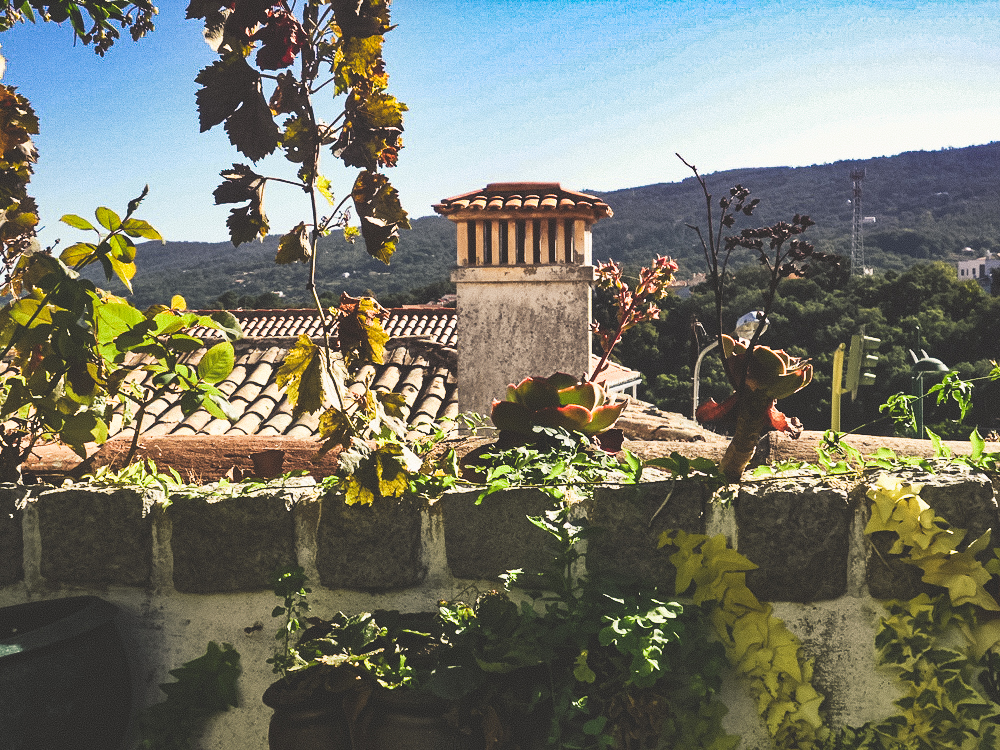 In the garden grows an abundance of medronho trees, in English strawberry tree. The lychee-like, red fruit, is the basis for a liqueur of the same name, Monchique’s specialty. It’s very strong, so the driver should give it a miss. A less potent version, called Melosa is ‘watered’ down with honey and was created for ladies.

For lunch go to the lovely restaurant Jardim das Oliveiras where you can sit in the garden among olive trees.

After lunch head a few miles further north to the city of Silves. It was the first capital of the Algarve in 1249 and known as a center of art and poetry. Visit the unique red sandstone castle and the cathedral, both being national monuments. 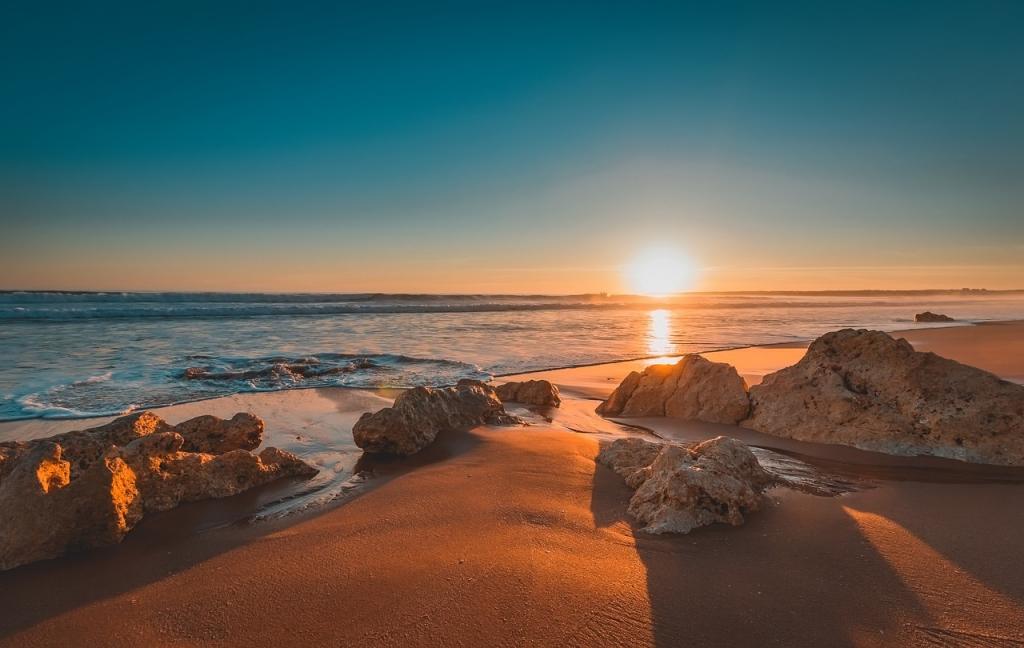 After that, it’s beach time. Head down to the coast via the village of Alvor to the beaches of Ferragudo and the famous rocks of Algar Seco, shaped by wind and the sea.

If you fancy a tasting of Portuguese wines, make your way to the Quinta dos Vales Winery in Estombar.

Things to Do in Algarve – Lagos

Lagos, inhabited since 2000 years, first by Phoenicians, then until 1241 by the Arabs, is a paradise for fans of history and the arts. From this port town, Portuguese seafarers set sail to conquer the West African coast. Through them, black slaves from Guinea and Senegal were first brought to Europe and Lagos was an important center for the slave trade until it was abolished in 1820. The old slave market exists to this day.

In 1755, a huge earthquake and tsunami destroyed nearly the entire city, but it was rebuilt with city walls, citadels, churches and lavish townhouses. Visit the old town, the Ponta da Bandeira Fort and San Antonio Church and several museums. 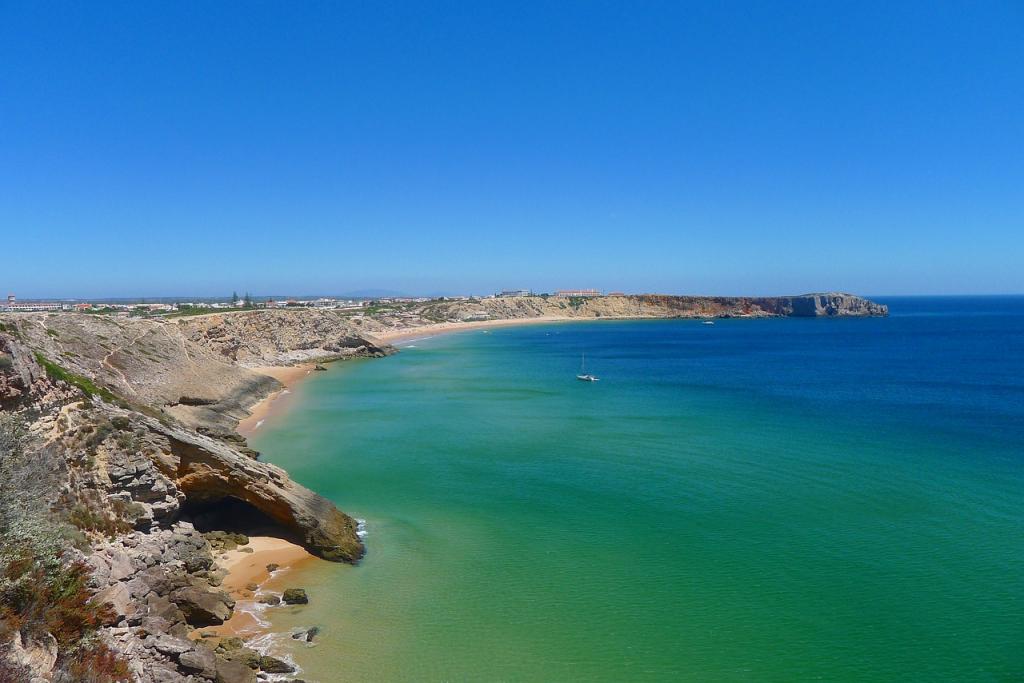 Where to stay in Lagos

Hotel Vila Gale on the outskirts of Lagos is a good place to stay. It’s a rather big hotel but with many facilities and an interesting scheme of décor: Portuguese fashion. Within walking distance of Lagos and across from a beach it’s a good starting point for day 3.

In the morning , make your way to the lighthouse and fortress of Cabo de Sao Vicente, Europe’s most southwesterly point. Fort Sagres is a destination of great historical and symbolic value. Built by Henry the Navigator in the 15th century as a nautical school, it started the Portuguese discoveries of Brazil, Africa and the sea routes to India and Asia.

Apart from Lagos itself and the historical monuments, day 3 is dedicated to some of the best beaches in Algarve, one more impressive than the next. Make your choice between the surf beaches of Amado, Carrapateira, and Arrifana or the majestic rock formations of Ponta da Piedade. Many caves and rock formations are best seen from the sea, therefore you might want to opt for a boat trip from Lagos, some of which include watersport activities. 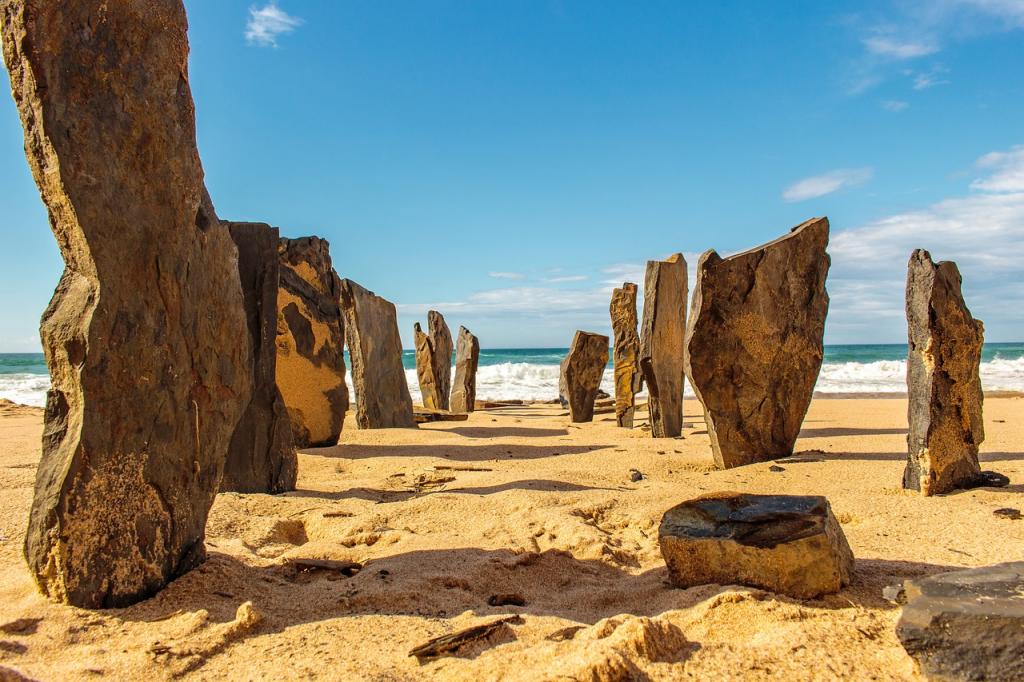 Where to eat in Lagos

With well over 100 restaurants in Lagos, you will never go hungry. If you prefer top-quality food over a lavish decoration, then Comidinha is the place for you. Local food in generous helpings, friendly atmosphere and a restaurants frequented by locals which I always a good sign, the place did not disappoint.

After your varied and eventful three days in Portugal’s Algarve, make your way back to Faro along the A22 Motorway. Hopefully, you enjoyed all the things to do in Algarve and this trip inspired you to visit the rest of the country.

Things to do in Algarve: 3 Day Itinerary from Faro to Lagos was written and photographed by  Inka Piesga-Quischotte  for EuropeUpClose.com. She was invited to Algarve by the Tourism Office of Algarve.

A soft climate tempered by the Atlantic, soft sandy beaches, mouth-watering cuisine, exhilarating coastal scenery; it's no wonder that Portugal's Algarve is one of Europe's favourite holiday destinations. We'll run our finger over the best things to do in the Algarve, from unwinding on dreamlike beaches to exploring coastal.