The opening sights and sounds of the Edinburgh Tattoo are spectacular, set against the backdrop of ancient Edinburgh Castle. In the distance, behind the castle walls, I hear the sinister rattle of dozens of snare drums followed by the wail of a single bagpipe. Then, suddenly, 600 pipers fire up their instruments in a loud cacophony of noise that echos across the esplanade. The excited crowd goes silent. Moments later, the pipers and drummers emerge from the billowing clouds of smoke that shroud the castle entrance. They’re playing “Scotland the Brave” and there’s not a dry eye in the packed, sloping metal stands. 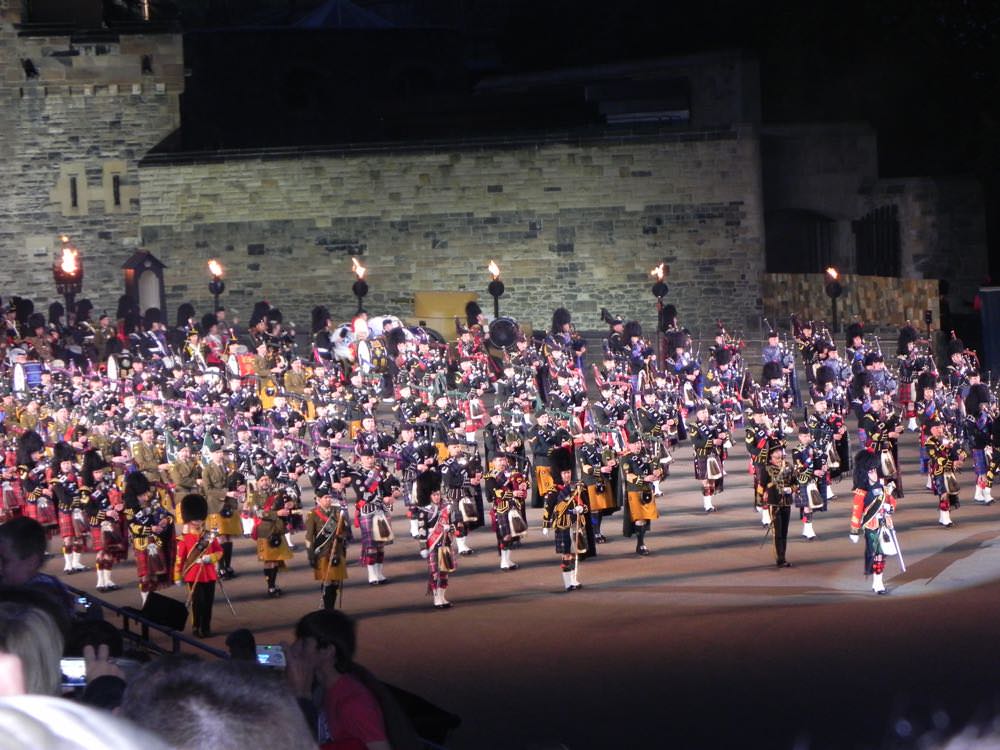 The atmosphere is surreal. Marching out into the cool night air, the pipers and drummers look like huge ghosts. Fully seven feet tall in their bearskin caps and shakos, and wearing colorful tartan uniforms, the pipers are bathed in subdued green and red spotlights. They’re marching in perfect step.

The rest of the show is just as awe-inspiring. I barely notice the occasional sprinkle of light rain. The Royal Edinburgh Military tattoo is more than just a plethora of pipers and dozens of drummers. The exciting 1.5-hour show includes everything from the daredevil Imps motorcycling team to breathtaking, gravity defying gymnastic performances. Choreographed groups of bonnie lasses from New Zealand and Scotland perform the Highland fling and other traditional Celtic and Scottish dances, wowing the crowd. 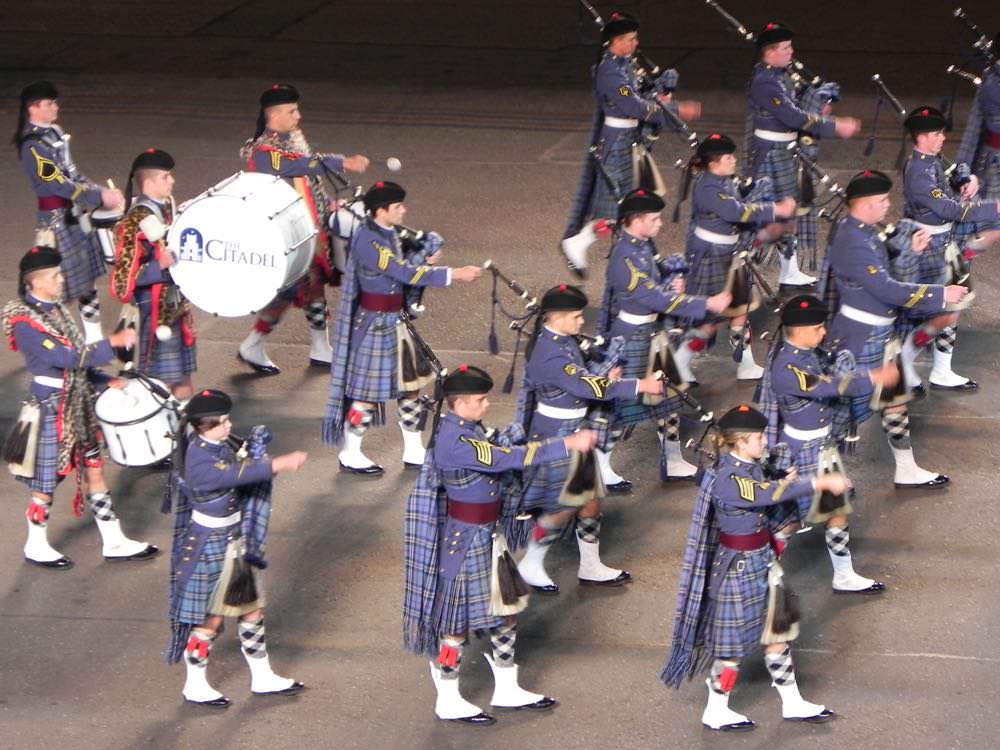 And the stirring military bands that strut their stuff at the Edinburgh Tattoo are the very lifeblood of the Edinburgh Military Tattoo. Wearing magnificent regimental uniforms and regalia, these military bands hail from across the globe: British military bands, the New Zealand Army Band, the Royal Jordanian Army Band, the Border Guard of the Republic of Poland, The Citadel Band from Charleston, South Carolina, the Ghurkas, the Army Physical Training Corps Band, and Police Bands, to name a few. Forty-seven countries, from every continent, have been represented at the Edinburgh Tattoo.

Of course, the massed pipe and drum bands, and the massed military bands—where all march together in the moving pipe-opener and Grand finale—are always the most popular events on the program.

You don’t have to be a snare drum and bagpipe aficionado to feel the power emanating up from the performing bands at the Tattoo. It simply leaps up from the courtyard and electrifies you from the very first skirl of the pipes until the last notes from the lone piper, standing on the castle battlements, fade mournfully into the dark night.

Held every August, this crash course in Scottish history, heritage, music, and dance just doesn’t get more authentic. A tour of Edinburgh Castle—itself a World Heritage Site—while you’re in Edinburgh is an absolute must see. It’s Edinburgh’s equivalent of the Eiffel Tower, and you would be negligent to miss it. Allow plenty of time for your Castle tour because it has a lot of stories to tell. 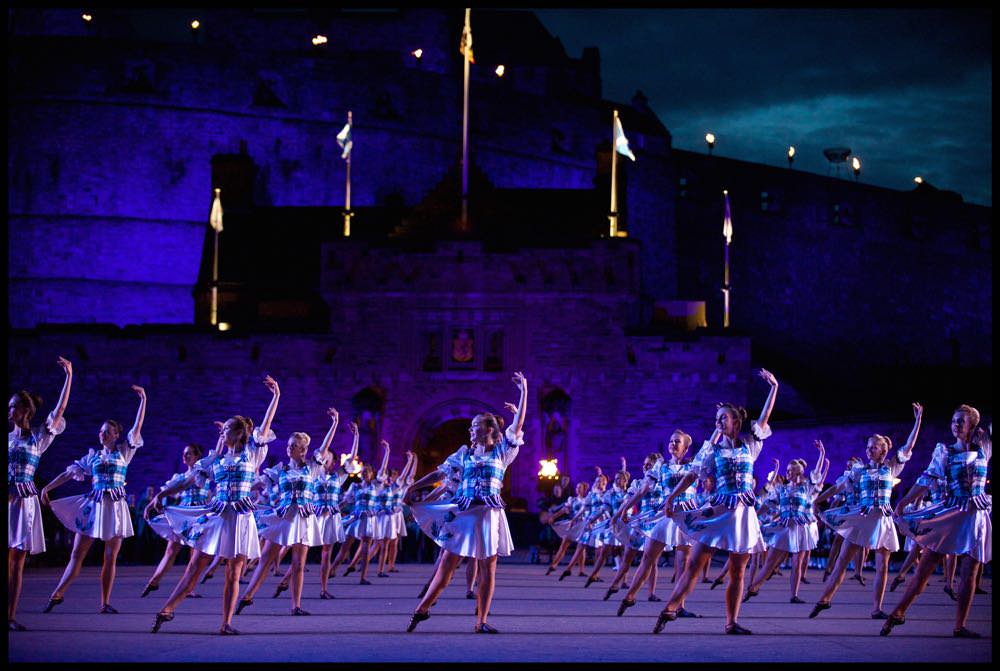 Sometimes it’s the small things about the Edinburgh Tattoo that stick in your mind. One of my favorite memories is seeing a group of Lairds and Ladies parading from the castle down the esplanade to their VIP seats. Wearing their full kilt regalia these strapping Scotsmen, with their beautifully tartan clad wives on their arms, present a quintessential Scottish sight that hearkens back centuries.

The Royal Edinburgh Military Tattoo, now in its 65th year, is the most popular event on the Scottish social and cultural calendar. It’s attendance figures are staggering and reflect its’ popularity—to date, 13 million people have attended. And, 100 million people annually see the tattoo on television.

An international audience of 220,000 people watches the show over its 22 day run every August. The show has sold out for the past 16 years, which means that if you want to book tickets you’ll need to do so early in the year! And I do mean early—ideally you should purchase your tickets one year before you plan on attending the tattoo. 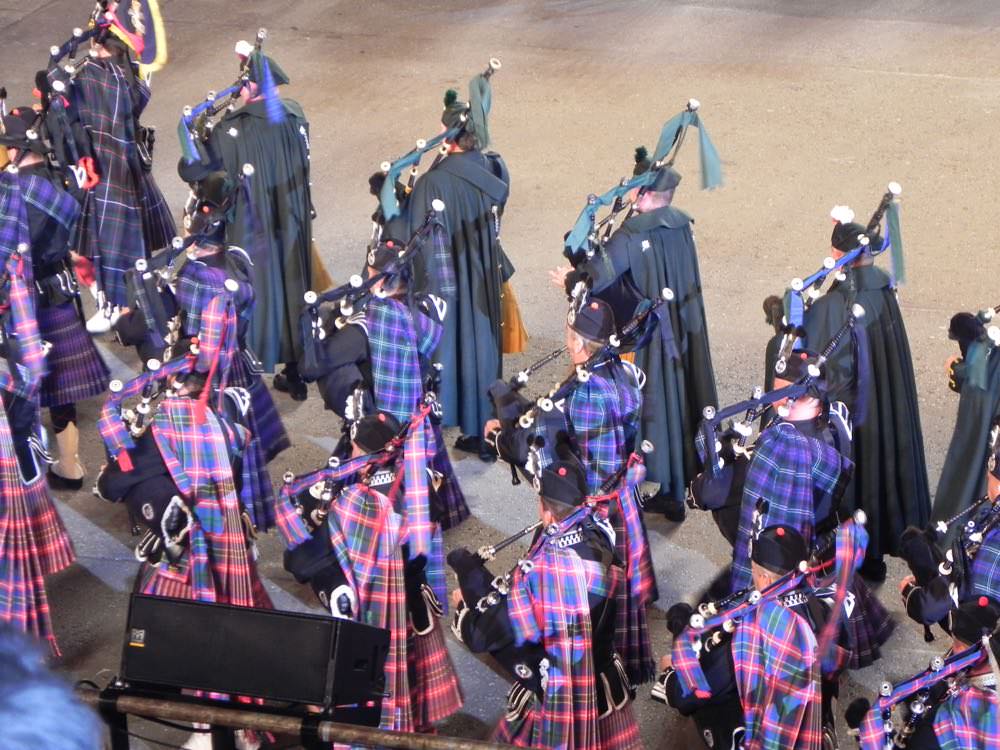 Beautifully clad in tartans, these pipers march in unison at the Edinburgh Tattoo

With 30% of the spectators from overseas it’s no wonder that the event is acknowledged as the world’s most outstanding Tattoo. The Tattoo’s impact on Scotland’s tourism industry is huge—it brings in 88 million GBP each year to the country’s economy. You’ll need to dress warmly for the Edinburgh Tattoo and bring an umbrella. Scotland is not known for its warm, dry weather, even in August. And arrive at least 45-60 minutes early to find your grandstand seat—10,000 people like you will be scrambling to find their seats at the same time! Your aim is to be towards the front of the line at the arena entryway on Johnston terrace, so get there early. 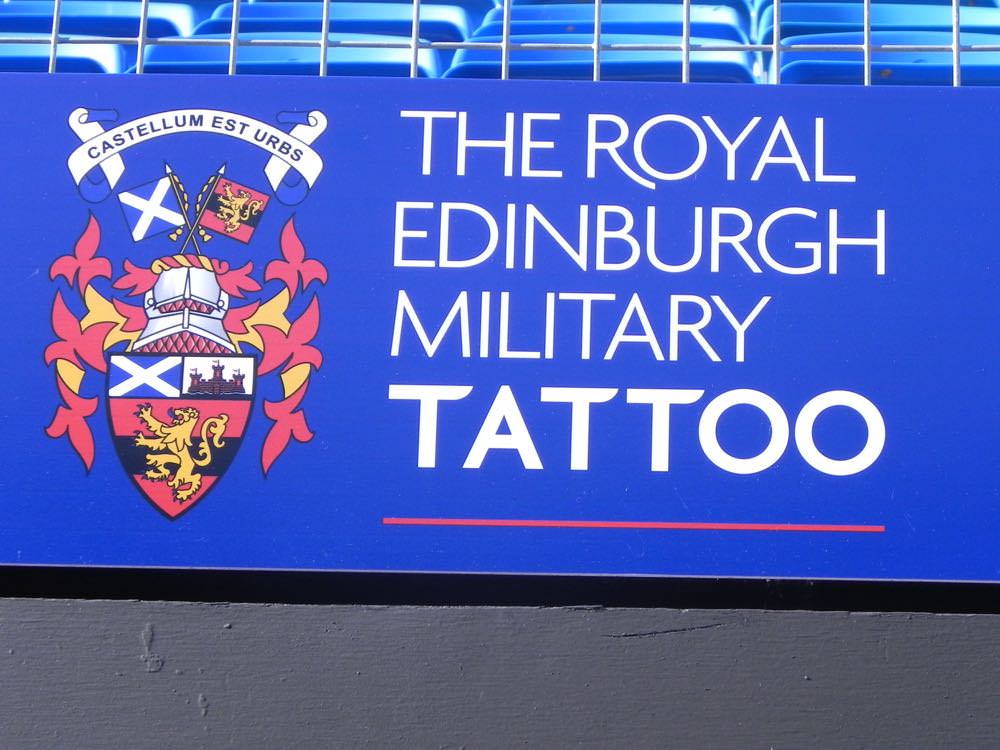 The Edinburgh Military Tattoo is definitely a family event and enjoyed by people of all ages. Your kids will not get bored, I promise. And, there is no smoking permitted in the arena. Seating is available in the outdoor arena (my preference), while Premier Seating, and VIP seats (there is a dress code for VIP seating) are available in the covered Royal Gallery.

I’ll certainly never forget the vivid and dramatic displays and rich variety of shows at the Royal Edinburgh Military Tattoo. And nor will you. You should book your tickets immediately.

Written by  Roy Stevenson  for EuropeUpClose.com

Would like to know where i can buy a tape of this year's tatoo program at Edinborough???