It’s not often you find museums depicting the home life and work of fictional characters, but that’s the case with The Sherlock Holmes Museum on London’s Baker Street. 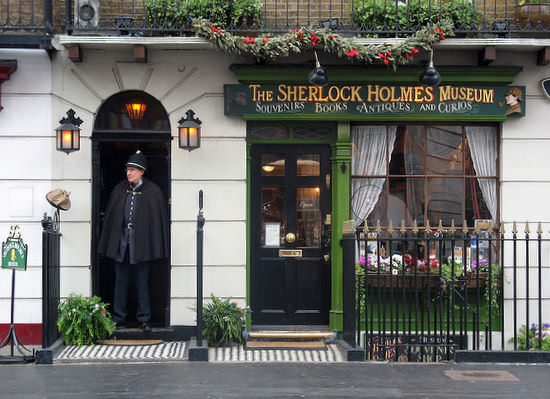 Sherlock Holmes is the memorable character created by Sir Arthur Conan Doyle, who lived at the fictional address, 221B Baker Street, London from 1881 to 1904 and recently brought back to life through the ever so popular modern version of Sherlock with Benedict Cumberbatch. Although Baker Street did exist in Conon Doyle’s time, he created number 221B. In 1930, when Upper Baker Street was re-organised to become part of Baker Street, a property with the number 221 did become reality. The Sherlock Holmes Museum originally opened in 1990, at number 239 Baker Street, but has eventually managed to become the highly appropriate 221B.

Now the four story building is dedicated to the life and work of Sherlock Holmes, and is decked out in full Victorian style. The museum is accessed via the shop, on the ground floor, which sells an abundance of Holmes related books and memorabilia.  It does involve a fee, but it’s relatively minimal compared to other museums. 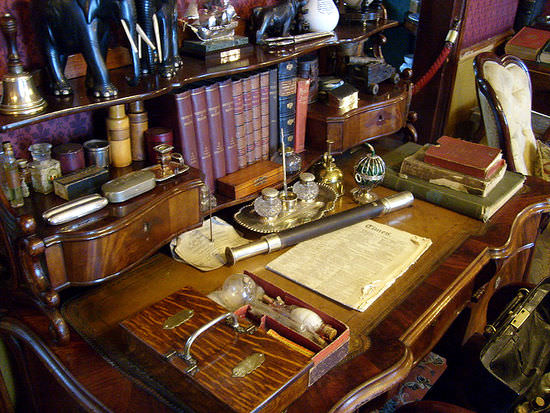 The Sherlock Holmes Museum houses three floors of exhibits, including lots of traditional Victorian pieces and well chosen artifacts representing Sherlock’s detective days. For example, you can see the stick that was said to belong to Dr Mortimer in the Hound of the Baskervilles and the club that was used to kill Colonel Barclay in The Crooked Man.

The first floor study was described in the books as overlooking Baker Street, so it has this position in the museum. It’s been effectively recreated to look like the study Sherlock Holmes had, and Conan Doyle so intricately described in his writing. The study is a very atmospheric room, from the traditional wallpaper and gaslight-like lamps, to the armchair by the fire and desk packed with books, an old copy of The Times, ink bottles and decorative items. 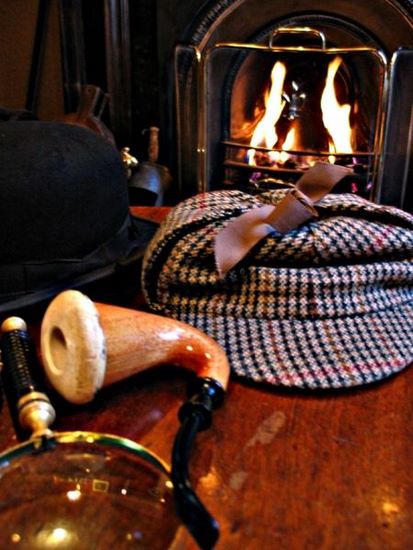 Items mentioned in the books, which people tend to associate with Holmes, are also easy to spot in both his study and his bedroom. These include his deerstalker, magnifying glass, pipe, disguises, chemistry kit and violin.

It wasn’t only Sherlock who was said to have lived in the house though, as his faithful partner in crime, Doctor Watson, lodged there too, along with their landlady, Mrs Hudson. The museum doesn’t forget them. There is a ‘real life’ Doctor Watson, dressed to the nines in Victorian costume, who will be happy to have his photo taken with you. And Doctor Watson’s and Mrs Hudson’s rooms, on the second floor of the museum, can be explored as well.

In Doctor Watson’s room, for example, you can view a diary with handwritten notes relating to the case of The Hound of the Baskervilles, and other personal effects relating to his character.

The third floor has wax models which were made to represent other characters that appeared in the books, such as Professor Moriarty and Sherlock himself. Although they’re not quite up to the standard of the wax works at Madame Tussauds, they do give an extra element of interest and bring to life names and characters from the novels.

Unlike a lot of other museums, many of the artifacts aren’t tucked away in glass cases, but are on display more freely, which helps create the impression that you really are wandering through the characters rooms. 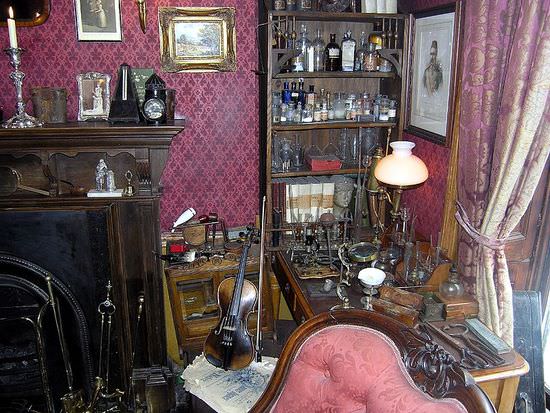 Although the Sherlock Holmes museum can be visited by anyone, fans of Sherlock and Conan Doyle’s novels will probably get the most out of a visit, as so many of the exhibits reference elements of the books or cases he investigated. The museum is so realistic that you can begin to forget that you’re looking at the fictional home of a fictional character, and not actual people who once lived here.

God bless the wonderful actors of Mr. Holmes and Dr. Watson. Perhaps one day I get the chance of visiting this place.