Le Château de Versailles was originally built as a royal country escape from the malodorous conditions of 17th century Paris. The gardens span several hundred acres and contain 55 diverse and beautifully sculpted fountains. With its proximity to Paris and famous reputation, Versailles is visited by over 4 million people every year; however, the gardens are so extensive that even on busy days it’s possible to explore for a long time without encountering large crowds. A place of breathtaking, almost overwhelming, architectural and horticultural beauty, Versailles is certain to stand out in your memory long after your travels to France are completed. 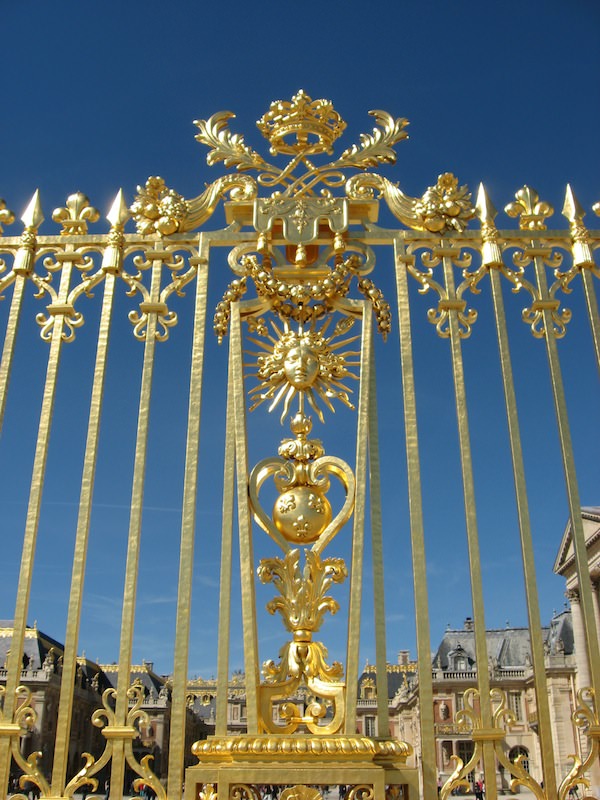 The Entrance to Versailles

The palace entrance is guarded by dazzling golden gates originally built to overawe the general populace and impress visiting aristocrats. They are also a reminder of just what can occur when a four year old succeeds to the throne and inherits absolute, deity-like power. At least that was the case of Louis XIV, also known as the Sun King or Louis Dieudonné (Louis, the God-given). His large-scale expansion of the opulent (and bankrupting) Versailles was a significant contributing factor in the long build-up to the French Revolution. But before those revolutionary days of ‘liberté, égalité, fraternité’ there was the divine right of kings and the stunning residences they created. 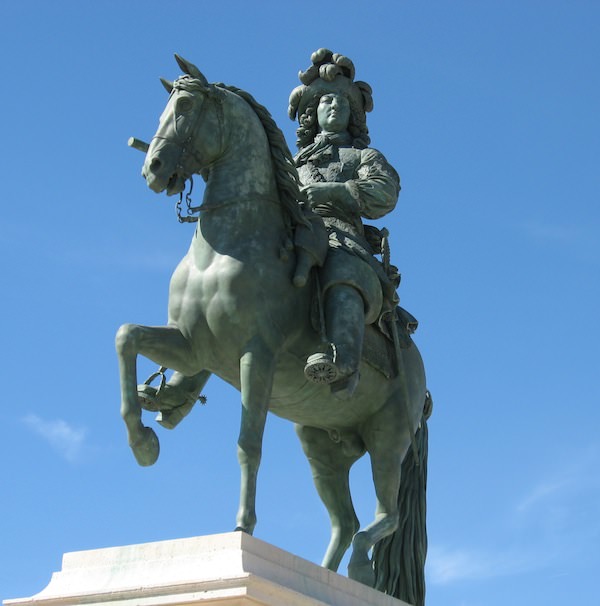 As mentioned previously the gardens contain 55 fountains. The intrepid visitor can see them all, but the following are certainly the ones that you don’t want to miss. Note that the gardens are open all year round, but the fountains only operate during specific days and times from the beginning of April to the end of October. I’ve visited Versailles when the fountains were on and when they were off and, although the gardens will always be impressive, it’s really the water features that create such a special and memorable experience. 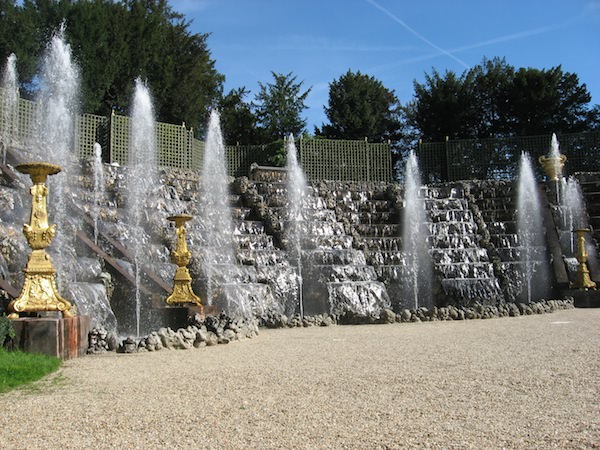 This circular enclosure of waterfalls is also known as Salle de Bal (Ballroom) for the dances and concerts that took place there during the reign of Louis XIV. If you examine the structure under the cascading water, you’ll notice that the whole base is made of seashells that were brought back from Africa by French explorers. 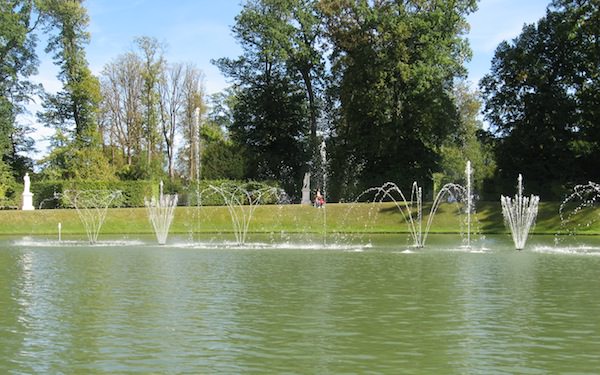 The Mirror Fountain at Versailles

The Mirror Fountain is located across from the peaceful English-style ‘King’s Garden’. At first glance, the Mirror Fountain appears to be just a small-scale version of the many ornamental pools created by Louis XIV to reflect his image (the sun). However, during operating hours the Mirror Fountain transforms from a reflecting pool into an enjoyable water display timed to classical music 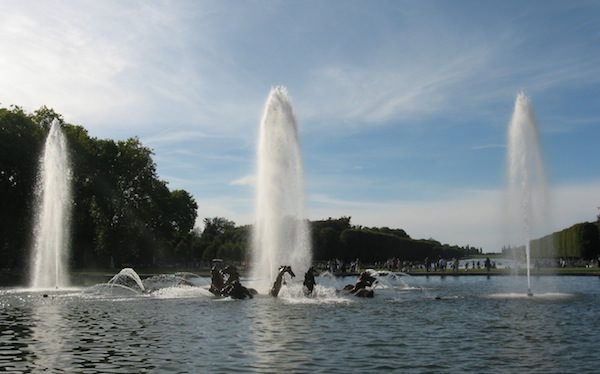 The Apollo Fountain at Versailles

This impressive fountain is centrally located at the lowest level of the terraced garden. A sculpture of the sun god, Apollo, with his chariot and horses, positioned as if they’re leaping right out of the water, are the central feature of the display. When combined with the surging water jetting high into the sky, the whole fountain conveys an image of explosive energy and power.

The Grove of the Three Fountains 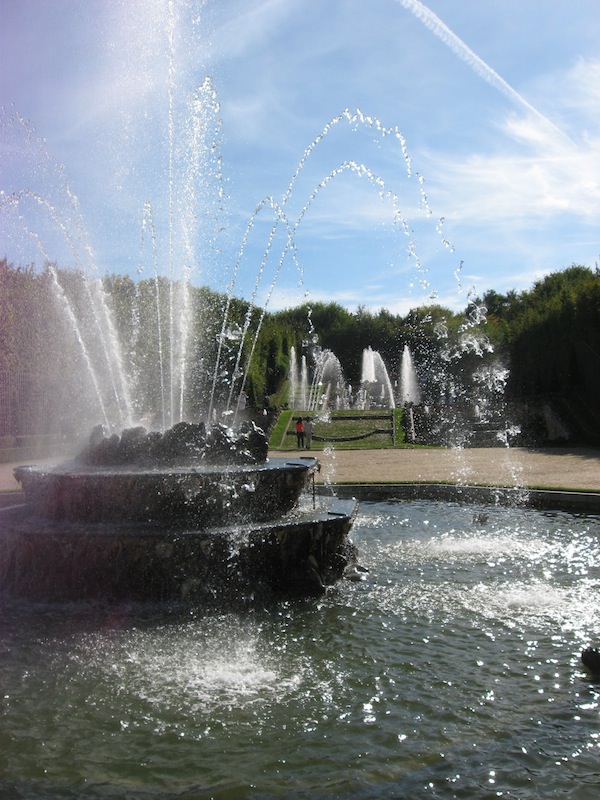 Grove of the Three Fountains

The grove consists of three levels, each with a different style of fountain. All three fountains are beautiful on their own, but form a striking image when viewed together, either from the top or the bottom of the tiers. Aficionados of French culture will note that the jets of water in the lower fountain form a fleur-de-lis, the symbol of France. 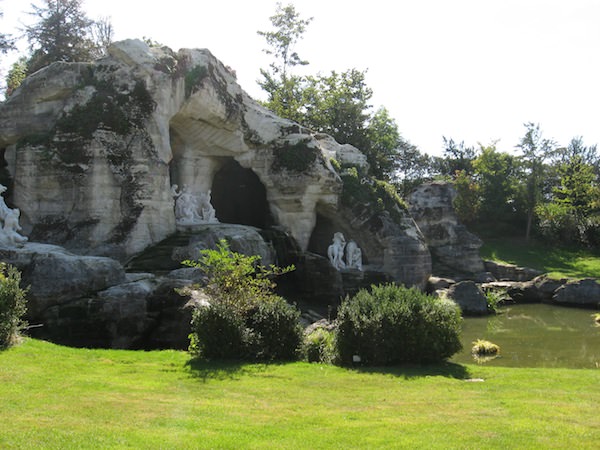 Cave with Statues at Versailles

The only downside of Versailles is the shortage of amenities (cafés, public toilets, an ice cream cart or two). There is a café in the palace ground floor as well as in the middle of the gardens, but the wait times are often prohibitively long. I did manage to obtain a sandwich from the little café in the palace, but it was quite the challenge with so many visitors converging at once (and all with differing cultural rules about ‘how to wait in a line’). A trip to Versailles is easily an all-day event, so you may want to bring your own snacks to avoid the hassle of overcrowded venues. On the other hand, there are several restaurants within short walking distance of the palace, including those serving traditional French cuisine for reasonable prices. 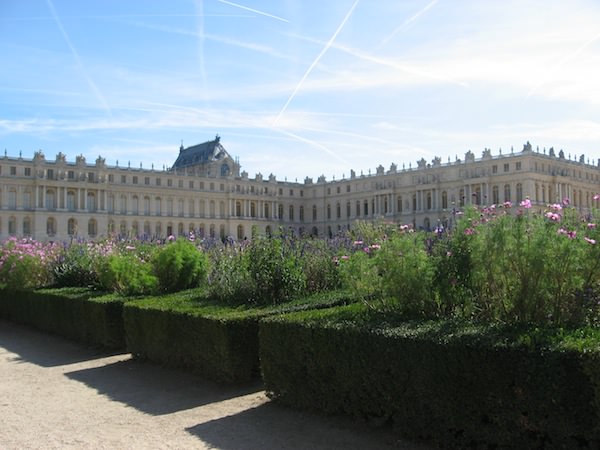 The Gardens of Versailles

To experience the Versailles gardens at their best, plan your visit for a day when the fountains will be operating during the spring, summer, or early autumn months.

Le Château de Versailles  is located in the small town of Versailles, just twenty kilometres southwest of Paris.  To get there: Take the suburban “RER C” train, which is accessible from the Paris Metro system.

[…] celebration, and the Champ du Mars is the obvious spot. A more bucolic alternative is to head to Versailles for lunch on the lawn.  Approximately 40 kilometers southwest of the French capital, the former […]

[...] celebration, and the Champ du Mars is the obvious spot. A more bucolic alternative is to head to Versailles for lunch on the lawn.  Approximately 40 kilometers southwest of the French capital, the former [...]

[...] celebration, and the Champ du Mars is the obvious spot. A more bucolic alternative is to head to Versailles for lunch on the lawn.  Approximately 40 kilometers southwest of the French capital, the former [...]

[...] and the Champ du Mars is the obvious place. A far more bucolic alternative is to head to Versailles for lunch on the lawn.  Approximately forty kilometers southwest of the French cash, the previous [...]

I have been to this fabulous place and it did capture my heart. I measure all palaces by this standard as, they say, the other palace builders did, too. However, happiness wasn't the issue there with all that gold and diamonds, which is sad.