And that sweet City with her dreaming spires,
She needs not June for beauty’s heightening,
Lovely all times she lies, lovely to-night!
“Thyrsis,” Matthew Arnold, April 1866

A century after Arnold penned those words about the city of Oxford a latter-day pop manifesto urges us to “Open your mind, arms and heart to new things and people.” If you think you are ready for some time under the “dreaming spires,” there’s no better place than at the Oxford college of Christ Church, England. 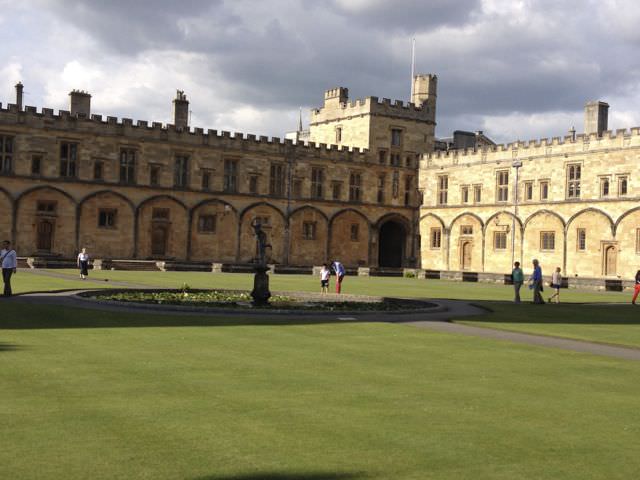 Home to the Oxford Experience, a summer program offering some sixty one-week classes over a six-week period from early July to mid-August, Christ Church allows participants to live the life of an Oxford student for a short while. In-depth study in a small-group setting during the morning is followed by optional afternoon and evening activities organized by the program. If you like a fair amount of intellectual meat in your travel experience, this may be the ticket.

During the academic year roughly 650 undergraduate and graduate students are in residence at Christ Church. (Perhaps one of them will be a British prime minister one day; Christ Church has provided thirteen PM’s to date.) But in summer, the Oxford Experience schedules a choice of ten to twelve classes each week drawing a weekly average of 90-125 participants. 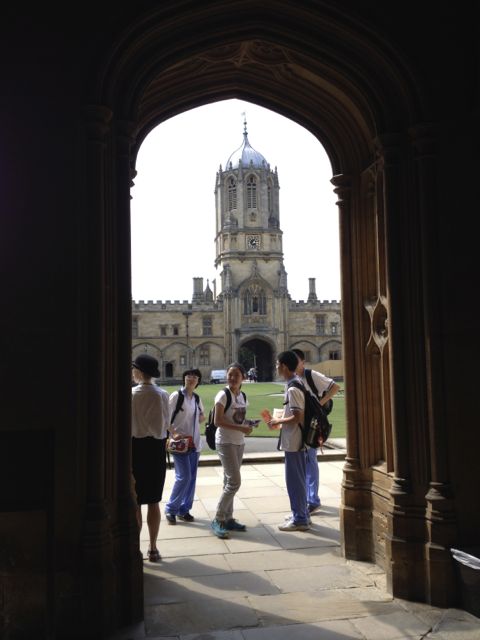 Course offerings mainly fall within the broad areas of art, early history, houses and gardens, literature, modern history and politics, music, natural and social sciences and writing. The week I was there the program offered a baker’s dozen of classes including Jane Austen, the Beatles, the Wars of the Roses, the music of Edward Elgar, the world of Trollope’s Barchester, the philosophy of emotion, Oxford’s medieval Jewish quarter, Stonehenge, the Romanovs, and more. Not surprisingly, there was one on Alice in Wonderland taught by the editor of Lewis Carroll’s diaries, Edward Wakeling.

The program started in 1991 during the Gulf War as a one-time hedge against cancellation of regular summer programs due to the fact that students were afraid to travel overseas. But it was such a success that it was offered again the following year, and the next. Now people come from all over the world although the majority are from the English-speaking diaspora of Canada, US, Australia and New Zealand. 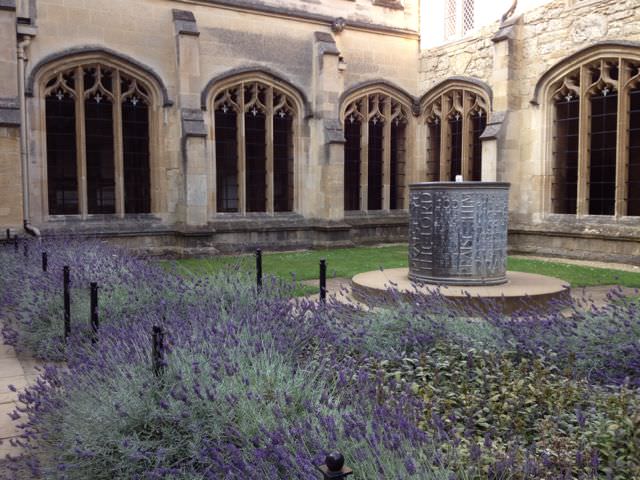 Programme Director David Beard and Programme Administrator Shirley Fawdrey are brilliant planners and their young on-site interns work long hours to ensure participant happiness. Part of the program’s success rests in what participants never think of, the elements that allow the project to purr along like a vintage Rolls Royce. They tend to details and upsets large and small with that legendary British calm and good humor.

And then there’s the faculty, known there as the tutors. Well-credentialed, certainly, but the high return rate of instructors—fervently requested by participants—speaks greater volumes. Several teach year after year varying their topics to provide a rich range of choices. But some classes are so popular that they are offered time and again with registration for the following year filling quickly. New instructors are also introduced, keeping options fresh and exciting from year to year. 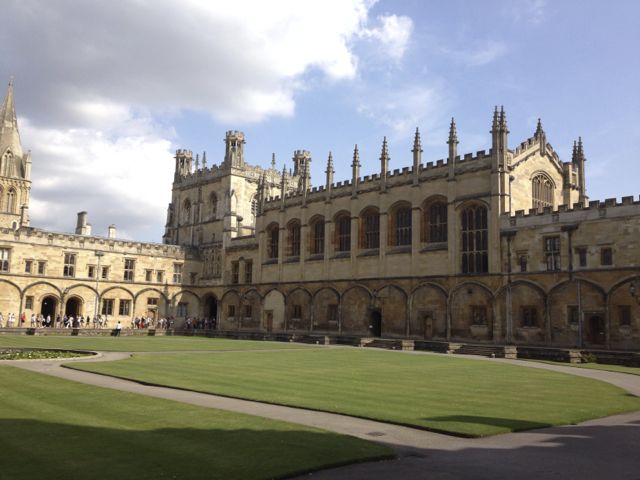 There can be no better endorsement of the program’s success than the very high number of repeat participants, over 60% the week I was there. Those who benefit most from the program are those who bring a crucial element with them—a willingness to engage in the new, something like Walter Benjamin’s “art of straying,” the notion that what is unknown to you is what you need to find.

Enrollees are housed in the halls of residence of Christ Church, one of the 38 colleges in Oxford. Spread over 150 groomed acres, the graceful architecture of Christ Church’s core quadrangle is flanked by additional quads, private gardens, the library and the diocesan cathedral church. Christ Church was originally founded by Cardinal Wolsey in 1524. The main tower, Tom Gate, was completed by Christopher Wren 160 years later and features a seven-ton bell. Every night at 9 pm it rings 101 times signaling that the gates will swing shut allowing the college walls to wrap its inhabitants in quiet containment until the morrow. For participants whose regular lives are demanding and boisterous it’s a transcendent tranquility. 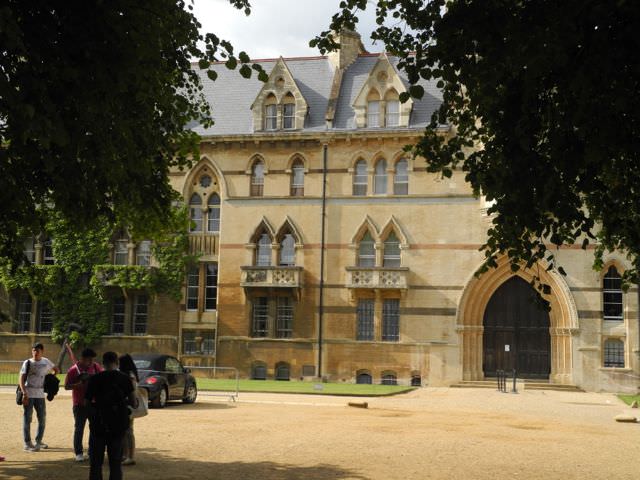 Within, one garden boasts an oriental plane tree with a girth of nineteen feet started from seeds brought back from the Mideast by Edward Pocock, a scholar of Near Eastern languages. Purported to be the first plane tree in England at nearly 400 years old, it was the inspiration for Lewis Carroll’s “Jabberwocky.” In the 19th century, the study of mathematician Charles Dodgson, the real Carroll, overlooked the dean’s garden and from there he could watch the dean’s daughter, Alice, playing. Our walking guide told us that several of the characters found in Alice in Wonderland were based on town folk, including a shopkeeper whose habit was to wear a tall hat and keep receipts tucked into the headband. 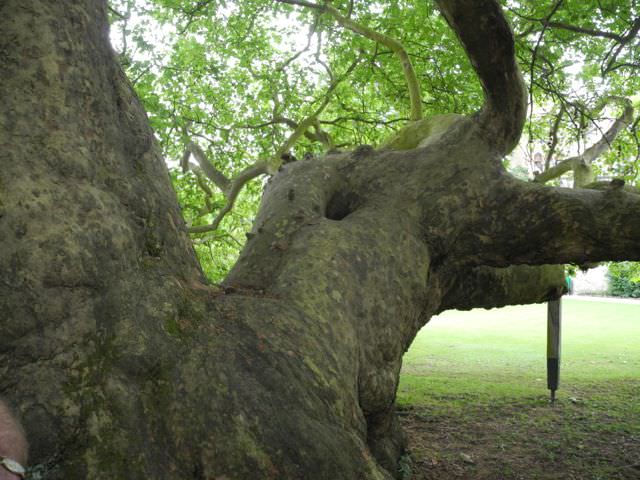 Our meals were taken in “the Hall.” This 16th century space, with its soaring hammerbeam ceiling and paneled walls, looks like something straight out of Harry Potter. And it is. Both the hall and the 17th century fan-vaulted staircase leading up to it were used for scenes in the film “Harry Potter and the Philosopher’s Stone.” Long before Professor McGonagall’s rule, Charles the First held his parliament there. It is now ruled by a corps of custodians who manage the daily crush of Hogwarts-seeking tourists with impressive restraint and infinite patience. Fortunately for participants of the Oxford Experience, the floodgates open for a limited time during the day and visitors are restricted to certain areas. 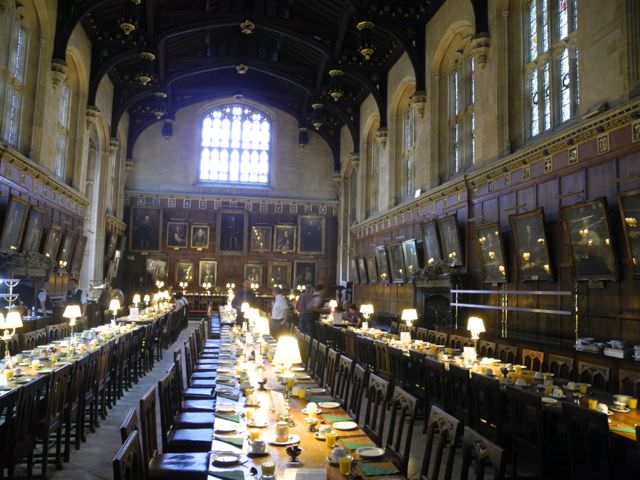 I use the term “visitors” but at Oxford there is only one person in the entire world who can be called “The Visitor” and that’s the queen. She visits once a year but I’m not sure she has as much fun as I did. Perhaps if she studied with Gillie…

I fell through the looking-glass into this world when I enrolled in a class on the French artist Henri Toulouse-Lautrec. Twelve lucky people got to spend a week gathered in tutors’ quarters with Gillie MacNeill, a neuroscientist by trade but a wizard at art appreciation by passion. We lucky few spent our time together learning about the artist’s life set against belle époque Paris at the turn of the century and looking at and discussing his artwork.

Spending a week in the intimacy of immersive study with a small group of keen minds is an exquisite kind of pleasure, that’s for sure. My group was highly engaging. But if, perchance, the morning meeting of minds doesn’t offer such connections, the program’s extracurricular features certainly do. The Oxford Experience is exceptionally well organized and one of its key features is the ample opportunity to mix. 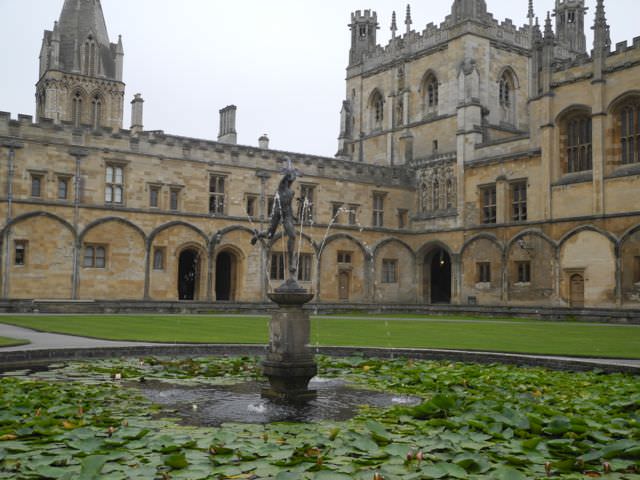 Meals, where seating is by chance at long tables with neighbors on either side and across, are open invitations to get to know people. Even though I was often outside my comfort zone in sitting next to complete strangers, I nearly always finished my meal having learned something fascinating or, at the very least, having had an out-of-the-ordinary encounter, a kind of English gothic bus ride with food.

In addition to morning class sessions, the program includes afternoon walking tours of the college and the town, general interest or class-related bus excursions and evening lectures and activities. For example, during my week, there was an excursion to Mapledurham House, an Elizabethan stately home, open to all participants. The Wars of the Roses class went to Bosworth, the site of the Battle of Bosworth, 1485. The “treckies” (Toulouse-Lautrec class members) went to the Ashmolean Museum to see related works of art.

Our first evening, we enjoyed a sun-filtered mimosa reception in the main quad. The second evening, we played croquet in the Master’s Garden. Wednesday evening, we had a choice of a lecture, “Curiouser and Curiouser: An Evening of Dodgson’s Puzzles and Games” by Edward Wakeling or, for those in search of a less-cerebral diversion, a pub crawl chaperoned by one of our trusty interns. Thursday evening, tutor Michael Dugan gave a lecture entitled “An Ancient Drinking Party.” 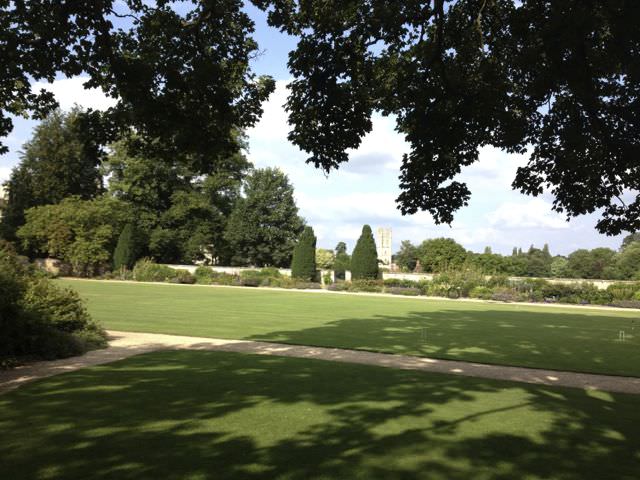 With this many mingle-fests, it’s not hard to spark friendships outside of class. It’s also perfectly acceptable, of an afternoon, to slip into a quiet corner of a garden with a book and take in the serene essence of the surroundings. I wonder if Lewis Carroll felt that way when he penned “Drink me.”

If you’re more ambitious and interested in hand-crafted water travel, you can rent a punt next to the pub called The Head of the River, an easy walk from the college. For gardening inspiration, there’s the Botanic Gardens on Rose Lane. The Pitts River Museum, an archaeological and ethnographic treasure trove, Blackwell’s Bookstore on Broad Street or the Ashmolean Museum offer their own particular delights. 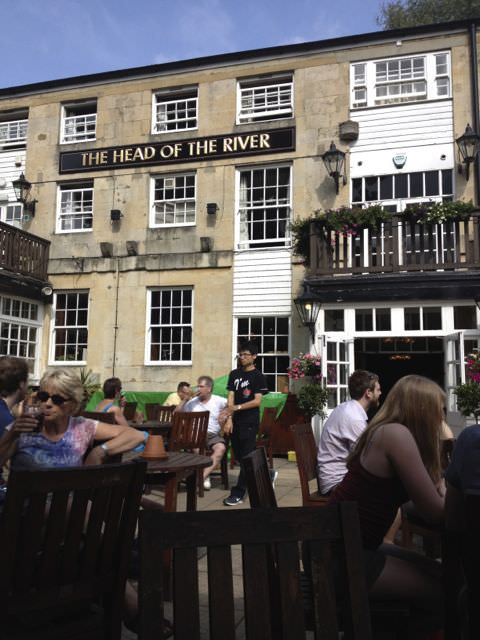 Head of the River Pub

Program rituals include one dinner during the week at high table with Director David Beard and other faculty and Friday evenings are always reserved for a formal farewell dinner. A feast of classic scope and length, it’s the time to honor and thank tutors for their tutelage and enjoy some final moments with class compatriots. 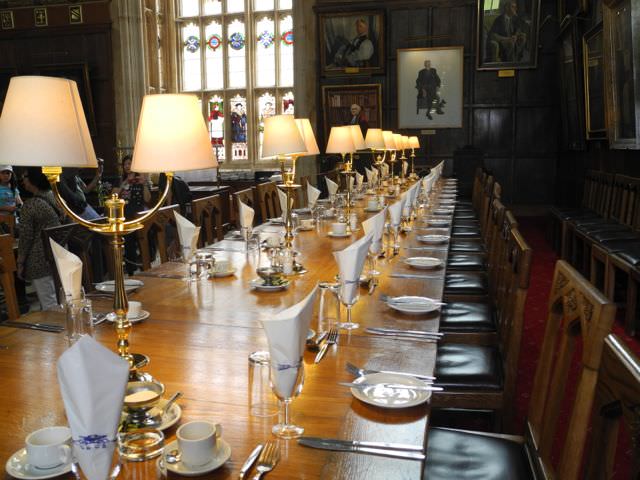 In 2015, the Oxford Experience celebrates its 25th year of existence. You must be at least eighteen years of age to enroll in the program and only participants of the program are allowed to be in residence, no extra family members. If you’re interested, you’d better hurry as classes fill quickly. The new program is posted on the website at the beginning of October: The Oxford Experience .

Maggie Herrington is based in Portland, Oregon and writes for newspapers, journals and online websites.

Hi Maggie, I really enjoyed your article, as I was just lucky enough to snag a place for this next summer's Wars of the roses. Can you tell me if the week includes 7 nights, or do we leave on Saturday? Thanks, Have you written other articles about traveling in England? Best, Laurie

I have completed the civilisation and language course at the Sorbonne last year and the experience has left me wanting more of a similar nature. I am currently studying an Associate Degree of Creative Writing and this Oxford opportunity looks like another lifechanging opportunty. Please forward the infomation to me. I am 57 years old and young at heart. I welcome any opportunities that offer an expansion of knowledge and experience.

Many thanks Hilda Olivier Australia