On a small, rocky plateau overlooking a deep tree lined glen, lies a modest Scottish chapel that has captured the imagination of millions of people around the world. Rosslyn Chapel, measuring only 68 feet long, 35 feet wide, and 42 feet high, has enough fascinating myths, legends and mysteries to put a major Cathedral to shame. 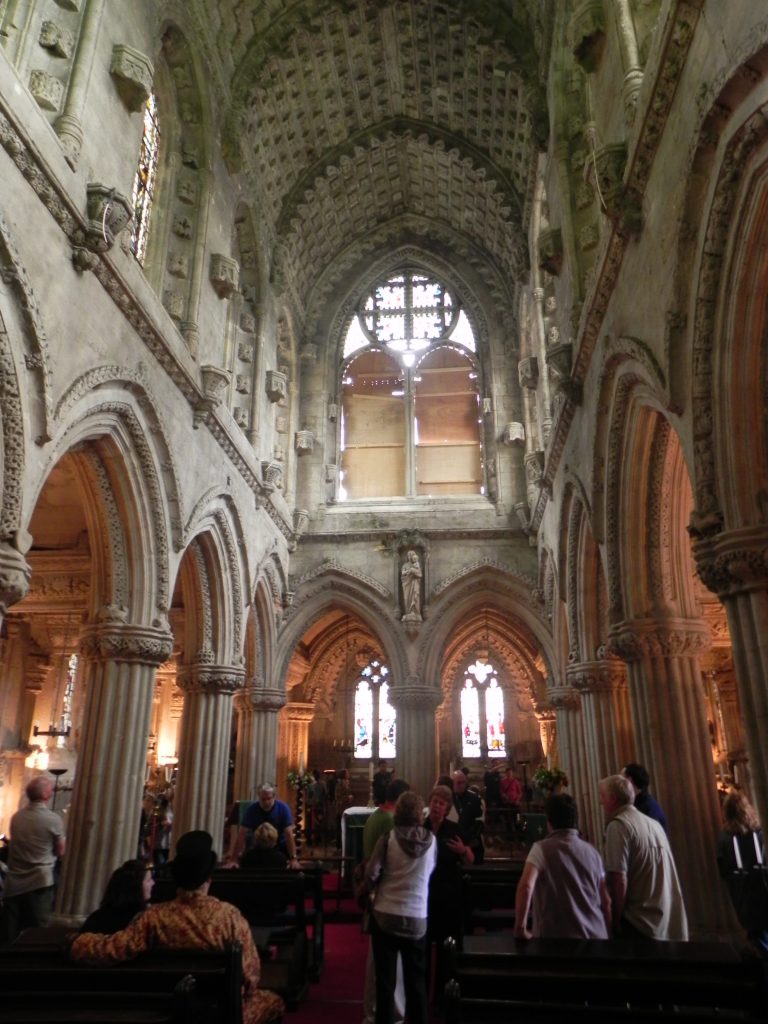 inside rosslyn chapel looking towards the altar

Despite popular belief that Dan Brown’s book, The DaVinci Code, put Rosslyn Chapel on the tourist map, it had been visited frequently since 1800 by many romance poets, writers, painters, and even Queen Victoria. Brown’s book, however, rocketed the chapel to super star status on the tourist and new age circuit, with visitors increasing from 35,000 in 2003, when the DaVinci Code was published, to over 175,000 in 2009.

Only 7 miles and a 25-minute bus ride from downtown Edinburgh, Rosslyn Chapel is a short walk from the small stone buildings of Roslin village. The 600 year-old Gothic chapel is a spectacular sight, with multi-hued sandstone block walls decorated with menacing gargoyles, intricately carved window arches, and several rows of Goth towers with pointed spires interspersed along its walls. 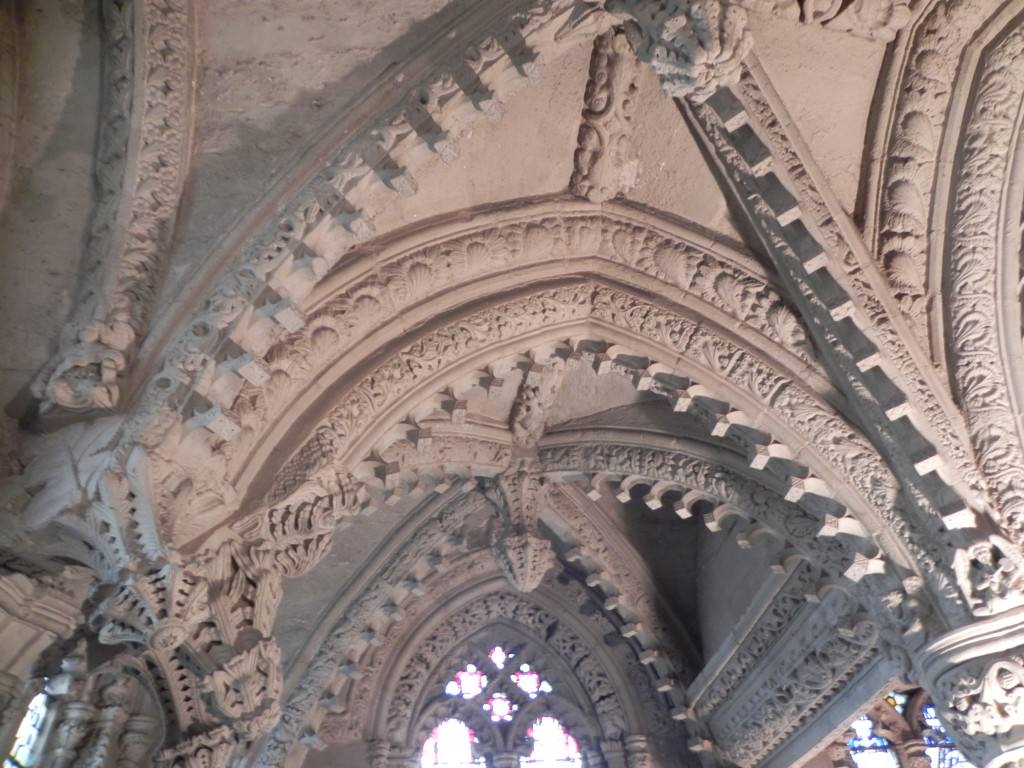 examples of the intricate ornamental carving on the arches and ceiling

Inside the chapel, the astonishing sight of thousands of carvings and sculptures that festoon the stone walls, arches, and ceiling is bewildering and captivating. Graphic images of angels, knights, faces, flowers, stars, dragons, pagan motifs, and religious allegories—each an individual work of art—are everywhere. One can only marvel at the team of French masons and craftsmen who carved this Arcanum, this book etched in stone, under the direction of the Chapel’s creator, Prince William Sinclair.

When William Sinclair, First Earl of Caithness, contemplated his mortality in 1446, he ordered the building of “a house of most curious work, that it might be done with greater glory and splendor”, in which he was to be interred upon his death. Thus was Rosslyn Chapel built—and the results exceeded all expectations.

Indeed, the carvings conceal many mysteries. Crafted by a small army of masons, every symbol has a meaning, from the green man who glares malevolently down at visitors, ivy sprouting from his mouth, to the Apprentice Pillar named after an 18th century legend where a master mason killed his apprentice in a fit of jealousy when the youngster wrought a magnificent column while the master was away. 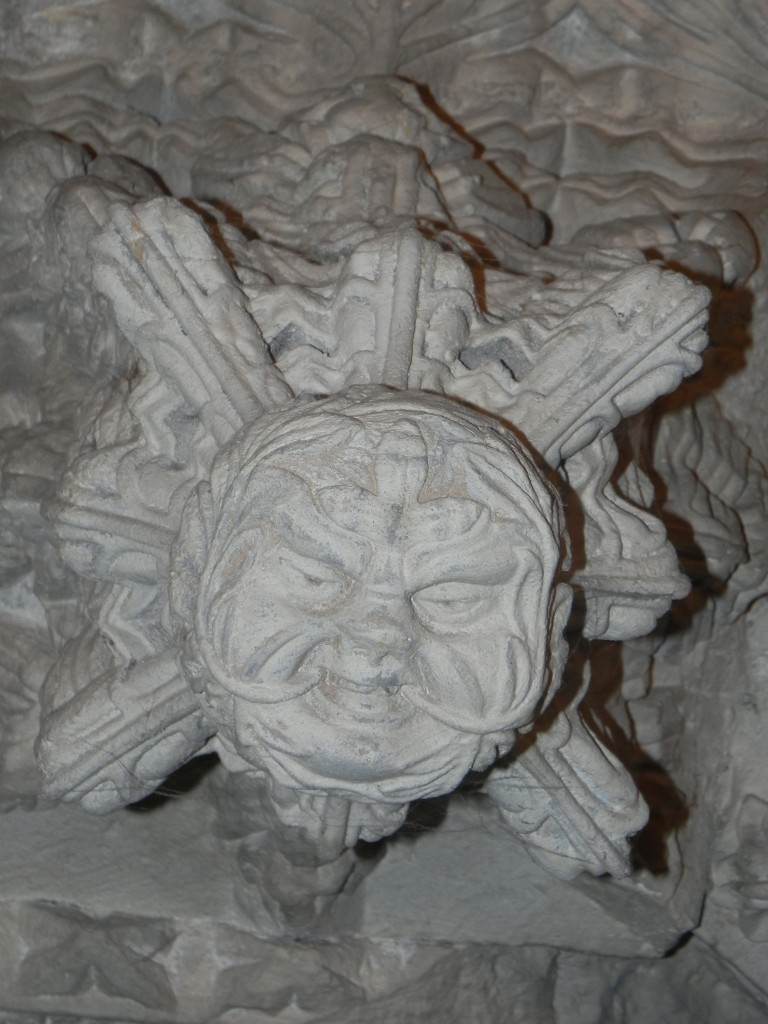 Many other legends abound about ancient religious connections with Rosslyn Chapel, but unfortunately, most of them are unfounded. Some sources (including The DaVinci Code) claim that the Knights Templar built Rosslyn Chapel. This is highly unlikely, as the Knights Templar had been wiped out 139 years before the chapel was started, although Sinclair was clearly aware of the Templars, as several of the chapel’s carvings would indicate.

Some believe that the Holy Grail is hidden somewhere within the chapel, but this is mere speculation, the only connection being that Henry St Clair likely participated in the attack of the Dome of the Rock, in 1098, where it is thought that the Grail was kept. The claim that the bloodline of Jesus and Mary Magdalene was passed on to the Sinclairs via the Merovingian-Frankish and Carolingian dynasties of Europe is likewise based upon so many frailties and inventive interpretation that it too is unlikely to have any merit. 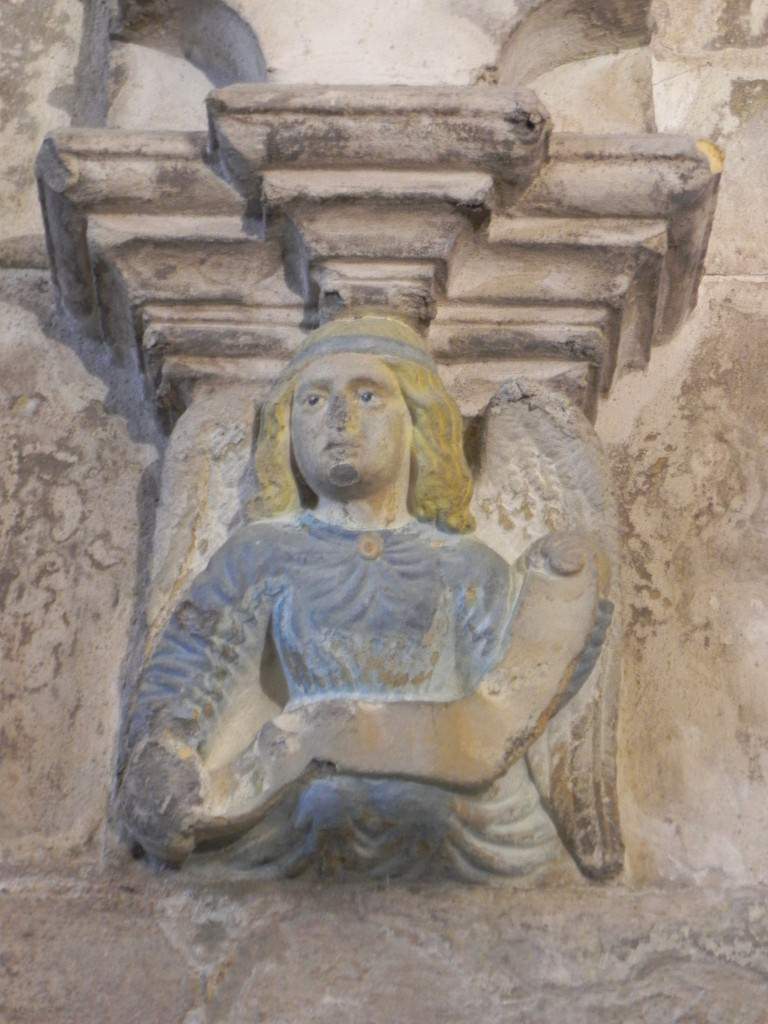 carving of an angel in the underground sacristy

A chamber deep beneath Rosslyn Chapel containing the remains of former barons of Rosslyn is documented in Theatrum Scotiae, published in the 17th century by John Slezer, Surveyor of Their Majesties Stores and Magazines in the Kingdom of Scotland. He writes that nine barons of Rosslyn and three princes of Orkney are encased in lead-lined caskets beneath the chapel. Modern technology does show that there are underground vaults beneath the chapel, parallel with and below the small sacristy reached by descending stairs at the end of the Lady Chapel.

Another mystery that has baffled archeologists and historians is the array of carvings of Indian corn over the arch of a window in the chapel’s south aisle. This plant was unknown in England and Scotland before Christopher Columbus’s voyage of discovery to the Americas, which took place 20 years after the chapel was completed. How then, did corn come to be carved into the lintels at Rosslyn Chapel before Columbus “discovered” it in the new world? 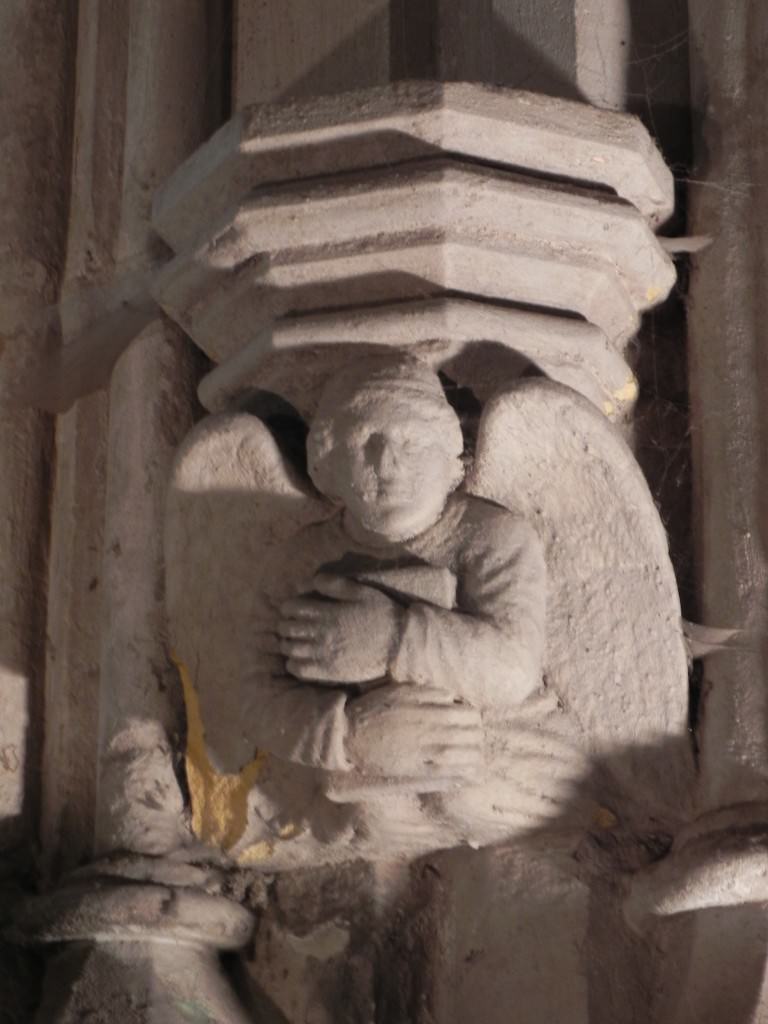 Angel clutching the bible in the Rosslyn Chapel

The answer might lie with anecdotal and physical evidence of a Venetian explorer named Antonio Zeno, who led a voyage across the North Atlantic in 1398, accompanied by Prince Henry Sinclair and a fellow Scotsman from the Clan Gunn from Caithness. At a tributary of the Merrimack River, close to Westford, Massachusetts, they, or a contemporary Native American, carved a figure of a knight holding a shield and sword into a large rock. The sword is of the type worn during the late 1300’s, and the heraldic emblem on the shield has been identified as that of the Clan Gunn. This evidence, coupled with Mik’maq Indian legends of white gods arriving from the sea on floating islands, plus an ancient multi ringed Venetian cannon or bombast that was dredged up from the Louisburg Harbor in 1849, supply plenty of evidence of this voyage.

Whether any of the myths and legends that derive from Rosslyn Chapel are true or not, they have created an aura of mystery, romance, and of course, outrageous exploitation. Regardless of any factual truths and fables associated with Rosslyn there is something about the chapel, an otherworldly sensation that seems to emanate from its very stones and pillars.

The barrel-vaulted roof of the Chapel, from east to west comprises sections of carvings of Daises, Lilies, Flowers, Roses and Stars. - The Daisy, white petals, the backs tipped with pink, its centre has a large yellow (gold) head … white surrounding gold. The white Templar Mantle has a large red Latin cross on the back. - The Lilies … St. Matthew, ‘and why take ye thought for raiment. Consider the lilies of the field, how they grow; they toil not, neither do they spin: yet I say unto you, that even Solomon in all his glory was not arrayed like one of these’. Sir William St Clair introduces King Solomon … and Solomon built a Temple. - The Flower panel is left for the moment … we move to the Rose panel. - In the Song of Solomon ... I (Solomon) am the rose of Sharon and the lily of the valleys. It is once again Solomon and a link with the Lilies and a valley … (the valley of the River Sals). - With the Stars there are Angels, the Sun, Moon, a Dove, Jesus himself and what looks like water. In Luke’s Gospel ... Now when all the people were baptised, it came to pass that Jesus also being baptised, and praying, the heavens was opened and the Holy Ghost descended in a bodily shape like a Dove upon Him and a voice came from Heaven. Jesus (St. Nazaire), and the river Sals in the valley at Rennes les Bains (a Spa).

The Daises say, ‘Templar and Gold’ ... The Lilies and Roses point to Solomon and the ‘Temple at Jerusalem’. The Star section tells us of ‘Jesus and bathing’. Putting the Daisy, Lilies, Roses and Star panels together the (Key) message may be read as …The Knight’s Gold from the Temple of Solomon is in the Church of St. Nazaire Et Celse at Rennes les Bains.

The Flower Section is between the ‘Roses’ and the ‘Lilies’, both referring to Solomon. The arrow-headed pendant boss suspends from the arch separating the Roses and Flower section.

The Flower section points us to the vaults beneath the Chapel. In Psalm 103 verse 15. … As for man, his days are as grass: as a flower of the field, so he flourisheth. For the wind passeth over it, and it is gone; and the place thereof shall know it no more. … In St Matthew … wherefore, if God so clothe the grass (flowers) of the field, which to day is, and tomorrow is cast into the oven … the fireplace that is in the Sacristy. (The Apprentices Pillar also holds a clue). A John Slezer, writing in 1693, knew of bodies of the barons of Rosslyn found well preserved after four score years in the vaults … the Holy Grail – a misnomer for the Ark of the Covenant was not mentioned.

Sir Walter Scott’s epic poem, ‘The Lay of the Last Minstrel’ – “Seemed all on fire that chapel proud, where Roslyn’s chiefs uncoffin’d lie. Each Baron, for a noble shroud, Sheathed in his iron panoply. Seemed all on fire within, around, deep sacristy and altars pale. Shone every pillar foliage bound (Apprentices Pillar), and glimmered all the dead men’s mail. Blazed battlement and pinnet high, blazed every rose-carved buttress fair. So still they blaze when fate is nigh, the lordly line of high St. Clair” … And when fate was nigh, the fire was lit in the fireplace in the Sacristy.

Sir Walter Scott knew the way down into the vaults below the Chapel was via the fireplace in the Sacristy, he was privy to the innermost secrets of the Templars.

Thanks so much for the commentary.

Thanks for a very interesting article and photos, Roy. You delve into the mysteries and intrigue and keep a realistic perspective. Now I'm eager to visit Rosslyn Chapel.