Like the first monks and today’s travelers, I first glimpse the holy Isle of Iona in the Scottish Hebrides from the sea. This birthplace of Celtic Christianity has attracted the faithful for nearly 1500 years and I wonder how Iona has drawn so many pilgrims and tourists to such a remote spot. Its enormous appeal is quite out of proportion to its size. 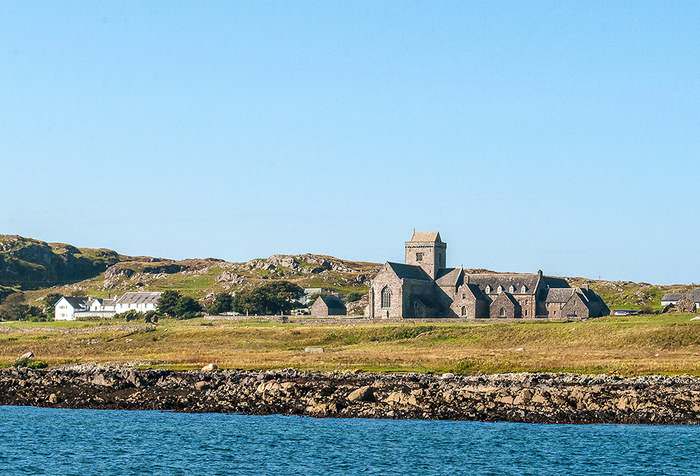 My first view of the Holy Isle and its abbey. Exquisite Iona perches just off the southeast corner of Mull in the Inner Hebrides, and was on the ancient sea route linking Ireland and Scotland. The tiny island has a rocky spine and one small hill, and is surrounded by white sand beaches.

The converted trawler, Glen Tarsan, of the Majestic Line, has altered course to port and chugs into the Sound of Iona under a cloudless sky. We anchor opposite the restored medieval abbey that dominates a grassy shelf west of the minuscule village of Baile Mor, which means “Big Town”! Nowadays, a hundred and forty residents welcome 140,000 pilgrims and tourists annually who arrive by ferry from Mull. But in mid-September, Iona is quiet. 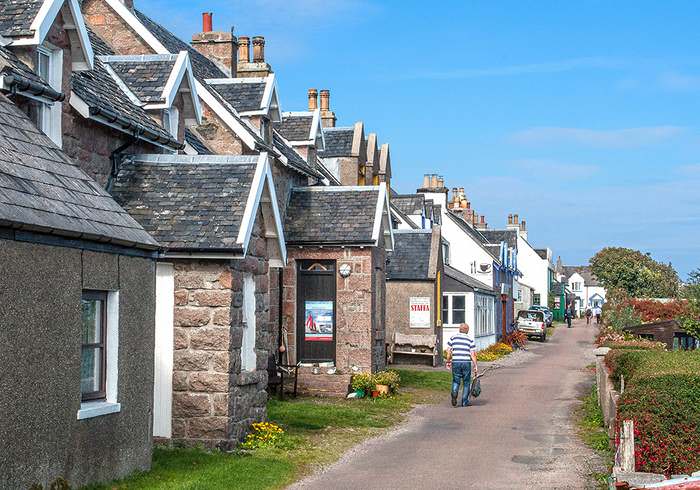 The main street of the village, Baile Mor. A gift shop, hotel, and a restaurant also crowd around the ferry dock.

After I climb a fuschia-lined lane that thousands have trod before me, I sit quietly in the bakehouse garden in front of Iona Abbey. I haven’t knelt at each high cross like the medieval pilgrims, instead I contemplate the atmosphere; I haven’t prayed, instead I review what I’ve researched about the abbey. But most of all, I listen — I listen to the whispers of history. The isle’s turbulent past creates a porous veil between then and now, substantial and spiritual. I can touch the history here, the awareness is so strong, and I’m pilgrim enough to sense the holiness embracing me. 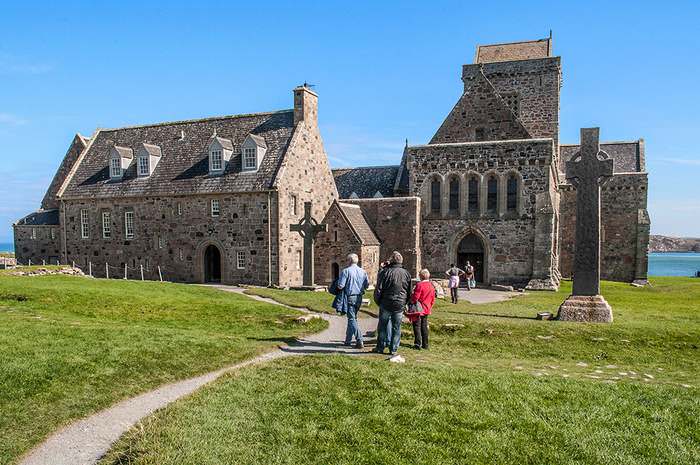 The landward view of the abbey complex shows how it looked in the 1200-1400s. (R) the Church of the Clans with two high Celtic crosses in front; (L) one of the domestic quarters that surrounded the cloister that now houses the administration centre and the gift shop.

I easily imagine how the monastery looked when three hundred Celtic crosses marked the path to the abbey church. The complex is more compact than I expected and, because it is isolated from any modern buildings, I view it exactly as it was re-established by the Benedictines in the 1200s. Built with red granite from Mull, it glows pink in the sun and the stones warm my hand. 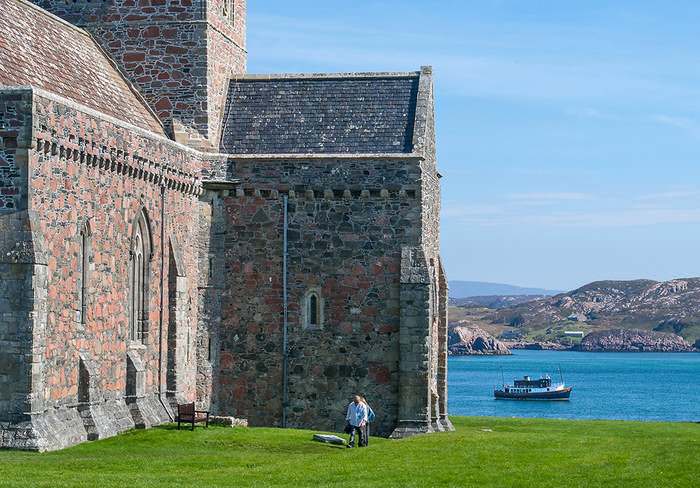 The abbey’s stones are red granite from the Isle of Mull across the sound where my micro-cruise ship, Glen Tarsan, lies at anchor.

However, when first founded by Irish St. Columba and his twelve companions in 563CE, the abbey was primitive — its wattle and daub church, thatched huts, and fields were all protected by a circular vallum or deep ditch. Here a centre of theological scholarship and learning developed; in the scriptorium monks squinted in dim winter afternoons using a single rush light to brighten their painstaking work of illuminating the world’s best manuscripts. 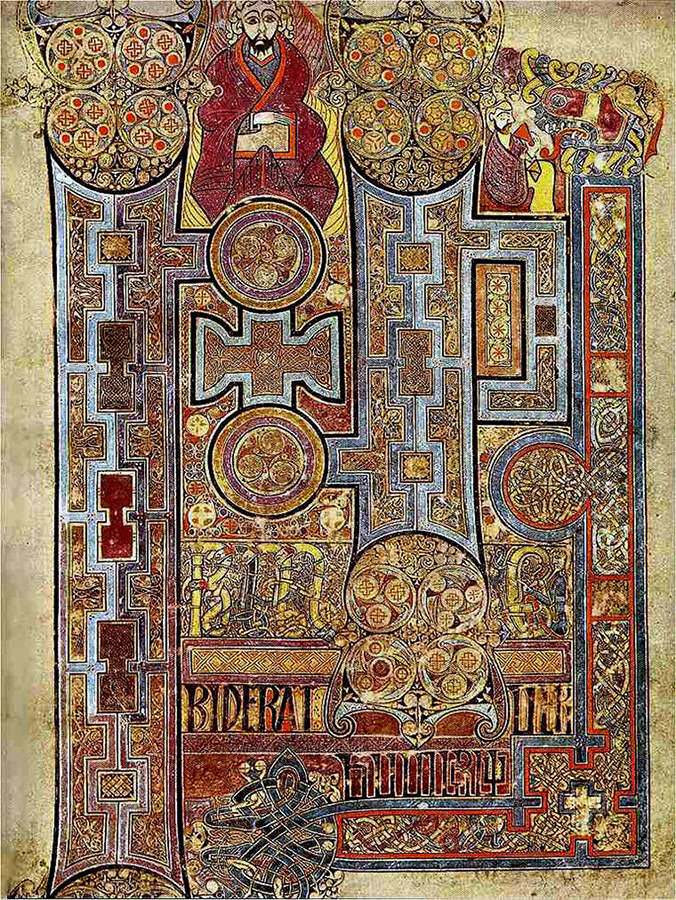 The opening page of the Gospel of John in the Book of Kells was created by the Ionian monks about 800. The famous Book of Kells, also known as the Gospel Book of St. Columba, was Iona’s greatest achievement and was evacuated to Ireland to escape the Viking raids. (Image: Wikimedia Commons)

Now I’m attuned to the site and its vibrations, I approach the west door of the abbey church, stopping to admire the two carved high crosses outside. One, St. Martin’s, is original dating from the 700s; the other, St. John’s is a modern replica. 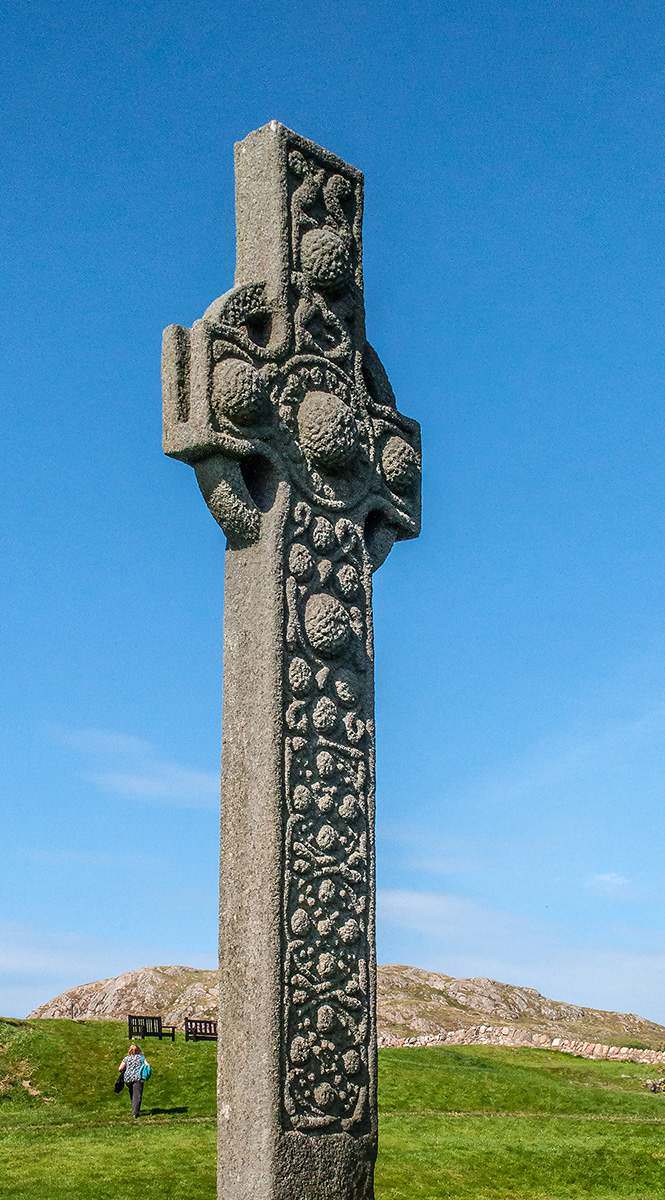 St. Martin’s Cross has stood in front of the west door of the church witnessing the great events at Iona for over thirteen centuries. On its west-facing side are scriptural scenes carved by the monks.

St. Columba’s shrine lies to the left of the west door, the biggest lure for medieval faithful seeking miracle cures. This small building housed the saint’s possessions and bones, once believed so powerful that they toured Ireland in a reliquary in the late-700’s. 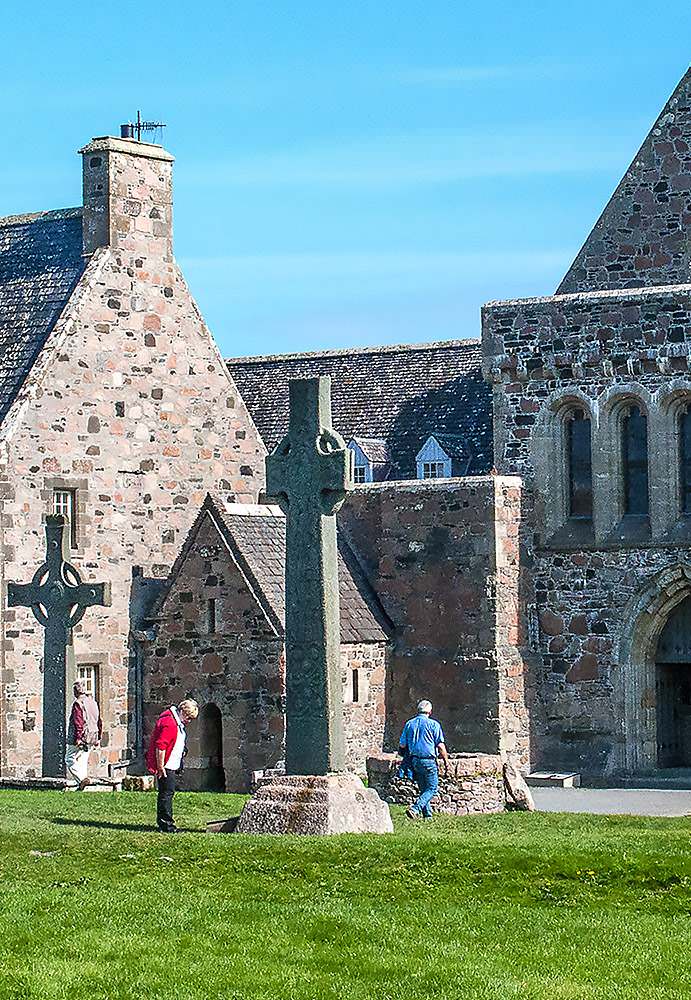 St. Columba’s Shrine is the small building against the wall. St. John’s Cross in front of it is a replica and the original, among others, can be seen in the excellent museum in the old infirmary.

The stream of pilgrims slowed to a trickle during the Viking raids in the 800s and ceased when the Norse fired the wooden abbey and murdered the abbot and sixty-seven monks at Martyrs’ Bay in 825. Although revenue from the pilgrims waned, the monastery was rebuilt and thrived. In time the Vikings converted to Christianity and settled in the Hebrides, becoming warrior chiefs. 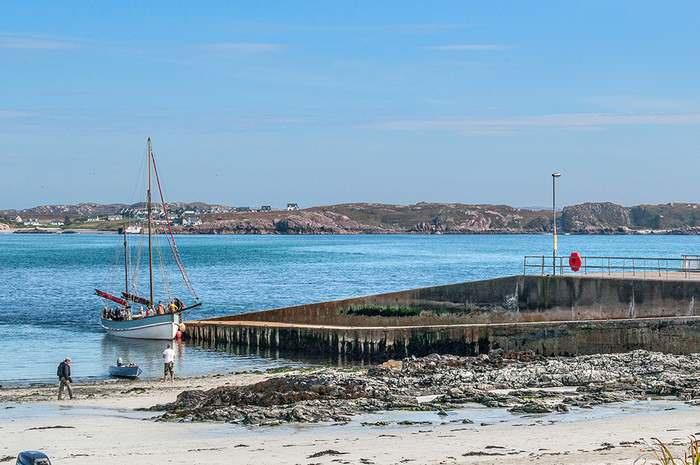 Iona’s ferry dock with Fionnport on Mull in the background. To the right lies Martyrs’ Bay where monks lost their lives in 825CE and the bodies of Highland lords were brought ashore for burial in the abbey’s hallowed ground.

Later in 986, marauding Danes again massacred the monks, forcing the community to abandon Iona. Two centuries later, Ranald, Lord of the Isles, invited the Benedictines to revitalize it in the name of St. Columba and also build a nunnery, both of which endured until their destruction in the Protestant Reformation of 1560, along with most of the high Celtic crosses.

It is this thirteenth century abbey, restored in the twentieth, that I admire today. Inside the church door on a raised plinth is a font partly made from marble quarried on Iona. 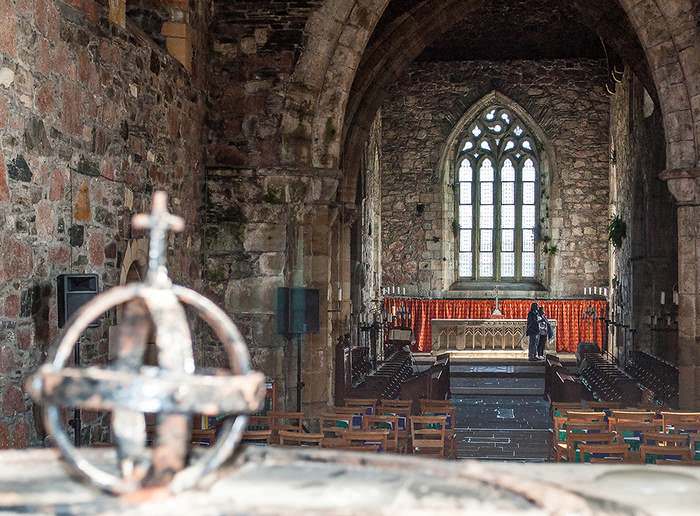 Taken from the raised font at the west end, red granite stones line the plain nave through the choir to the modern altar carved from Iona marble. The church is about the size of an average parish church.

The unadorned nave echoes with centuries of plainsong and millennia of spirituality. On either side of the altar are tombs of revered abbots, and in the south transept lie the eighth Duke and Duchess of Argyll commemorated in marble — they owned the whole island and gave it to the Cathedral Trust in 1899. 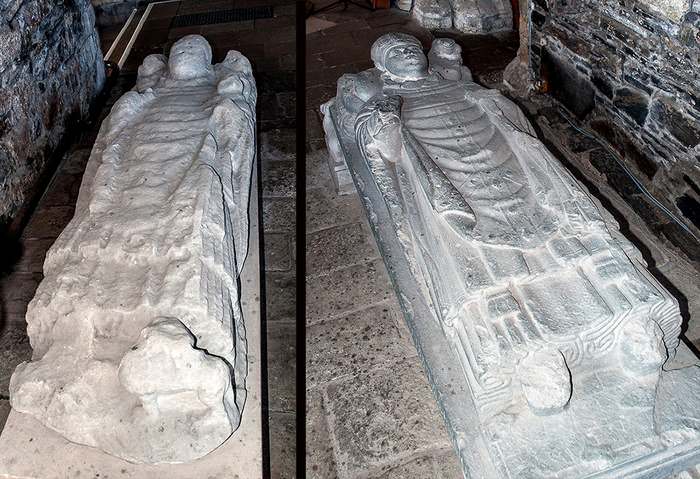 I enter the tranquillity of the cloister surrounded by the domestic quarters of the monastery — the refectory, dormitory, and guest accommodation. Today most are used by the current Iona Community and are inaccessible to the public, but I can walk the cloister as the monks did and admire the restored columns and modern sculpture in the centre. Here too some of the West Highland warrior chiefs’ grave slabs are displayed. 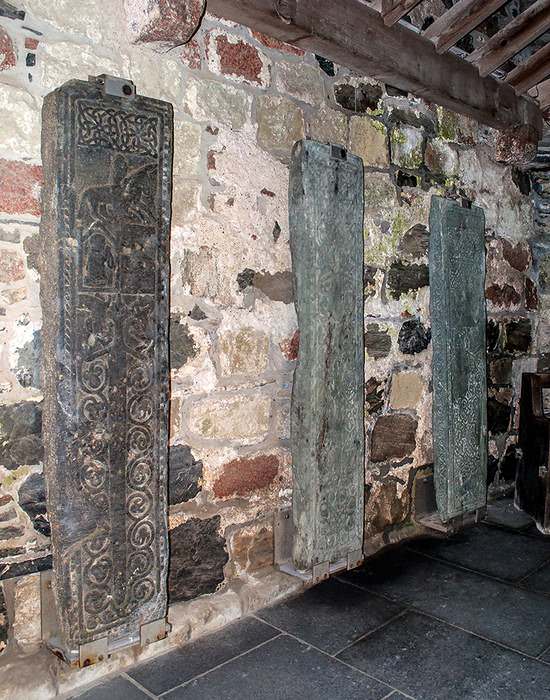 Examples of ancient graveslabs line the cloister. They were elaborately carved by the monks and laid flat over the graves of the warrior chiefs (Kings of the Isles) and Highland nobility in the cemetery outside St. Oran’s Chapel. They date from 1300 to 1500.

Separated from the main complex are the infirmary, now a must-visit museum, the abbot’s house, and the tiny Michael Chapel. Further away is the ruined bishop’s house. 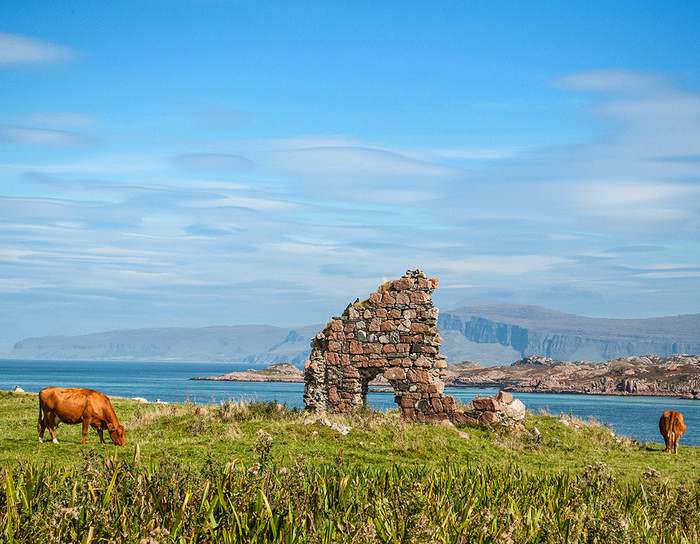 The ruins of the bishop’s house, built in the 1630s when the church acted briefly the Cathedral of the Isles, lie to the north of the abbey.

Lastly, I stand on big red cobblestones — the remnants of an ancient track. I take a few steps towards a stone wall and St. Oran’s Chapel,  and hear the creak of wagon wheels and the jingle of harness. The funeral processions of the great Gaelic lords followed this “Street of the Dead” from Martyrs’ Bay to the cemetery outside the chapel, the oldest intact structure still standing from the 1100s. Macbeth murmurs to me; a legend has him buried here but as no records survived the Reformation, it remains only a tantalizing possibility. 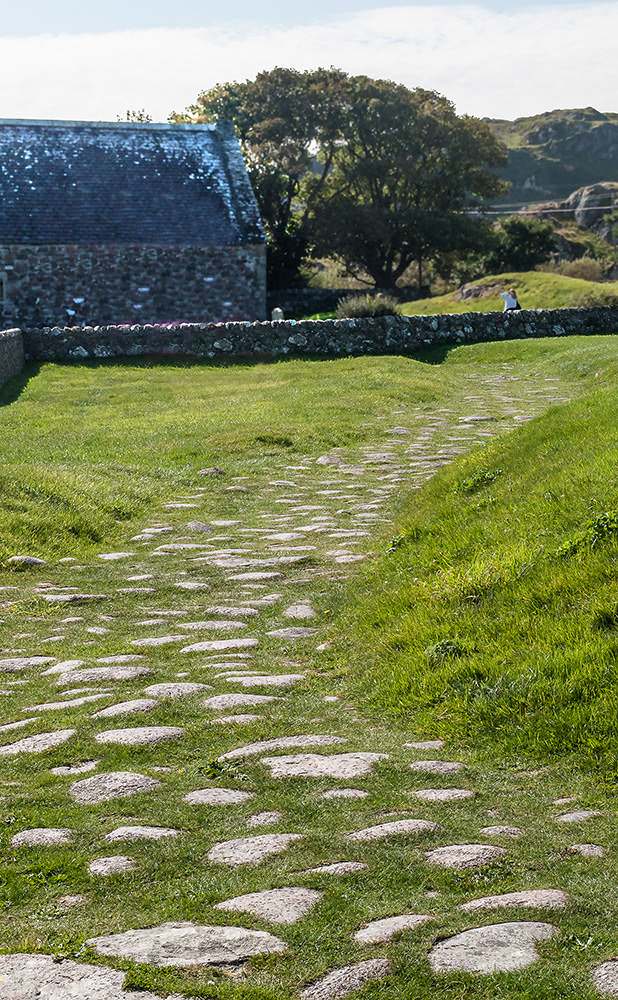 About 1000 years old, the Street of the Dead linked Martyrs’ Bay, the burial ground and St. Oran’s Chapel consecrated by St. Columba, and the abbey. The granite cobblestones are worn smooth by the footsteps of countless pilgrims seeking miracles from St. Columba’s shrine.

On the way back to the village, I pause at the nunnery of St. Mary the Virgin. In ruins today, it’s still one of the best preserved in Britain. I can visualize it in the 1200s — nuns in black habits bustling around the gardens, and women who sought refuge and peace here walking in the small cloister.

The religious communities of Iona have overcome fire and murder, battles and desecration to once again support a vibrant faith community. The Iona Community focuses on global peace and social justice initiatives and attracts pilgrims from around the world who can stay in the abbey.

As I climb aboard Glen Tarsan, my exploration of historical Iona and my experiences in the abbey have clarified why it’s remained such a draw for centuries — it is one of those special, sacred places of the world that touches everyone regardless of their faith or none. Whether one values spirituality, ancient history, or simply the island’s enduring beauty, a pilgrimage to Iona more than enchants a modern-day tourist, it astonishes.

Written by Julie H. Ferguson and ©Photos by Pharos 2014 (except where noted) for EuropeUpClose.com

Manisha, thanks for your comment. I hope you get to Iona and see it personally. Julie

great Blog I love to visit historical places. I like first pic of post. however, the island is beautiful.thanks for sharing fore side...