Northern Ireland is undoubtedly one of the world’s most beautiful places. Blessed with a stunning coastline and a culture continually voted one of ‘the world’s friendliest’, this small country (of only 6 counties) should be on the must-visit list of every traveler who longs to experience genuine hospitality and a more relaxed way of life. 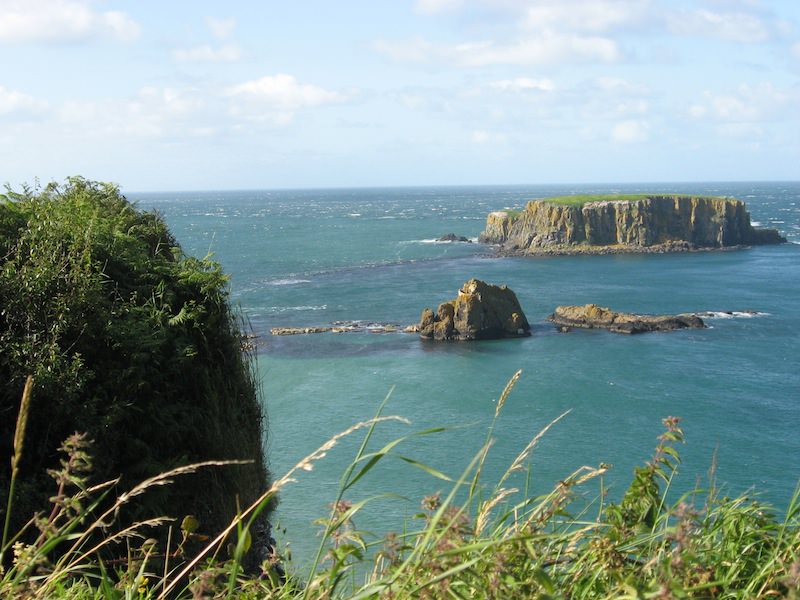 Northern Ireland’s capital city of Belfast, however, has very different points of intrigue beyond the natural beauty and geographic wonders found in the rest of the country. When visiting Belfast it is not possible to avoid the religious, political, and social ideologies that have shaped so much of the country’s past and present. Even in a relatively peaceful time, the city is still one of obvious divisions and tensions, which are most vividly reflected in the graphic city-wide murals and the so-called ‘Peace Walls’ that run throughout the neighborhoods (around 100 barrier-walls divide Belfast according to most official estimates). As is the case with so many internal conflicts, it’s difficult for the outsider, the visiting tourist, to fully understand Northern Ireland’s complex history or to form an unclouded perspective of the recent ‘Troubles’. Thus, it’s best to dive right in to Belfast with an open mind and a willingness to experience all sides of the city’s past, present, and future story. 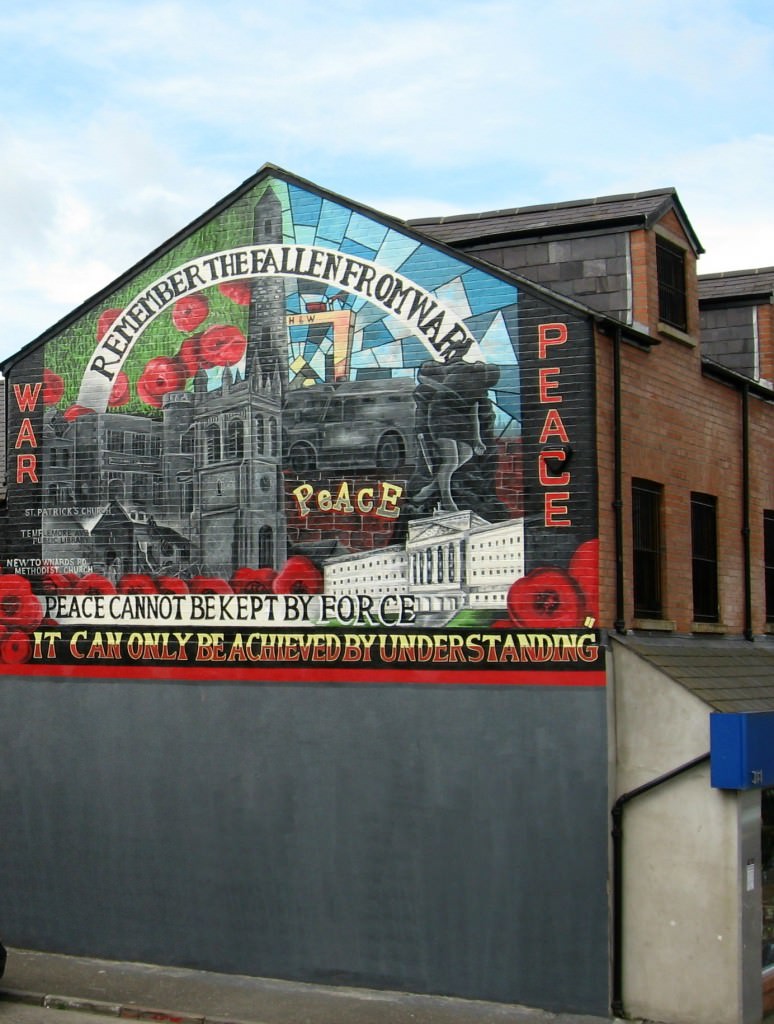 For a European capital city and major metropolitan area, the quiet stillness of Belfast is unexpected. When I was there the streets were consistently deserted and the sound of traffic and pedestrian life muted. As a local later informed me ‘most everyone in the city keeps to their own community’. I found Belfast city-dwellers to possess the characteristic hospitable spirit and same friendly demeanor as the rest of the island, but it is clear that the tensions of recent years have not yet faded into the past. 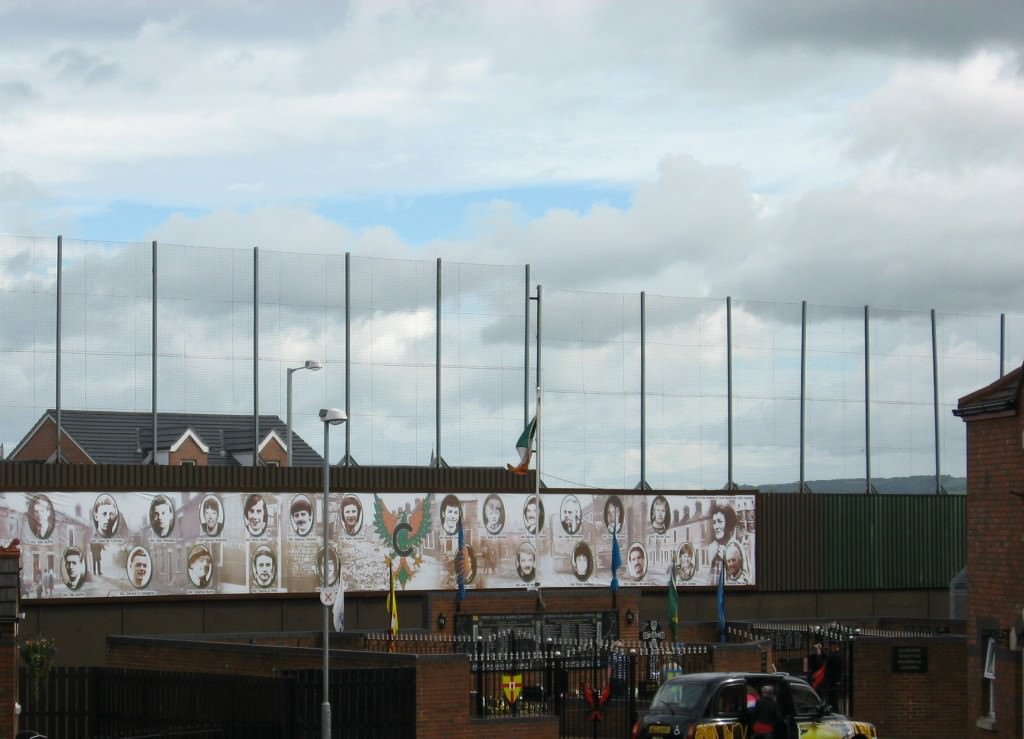 Most of the peace walls of Belfast are community-driven and relatively recent constructions (the great majority were built after the official IRA ceasefire of 1994). I visited the longest peace wall in Belfast, which runs along Cupar Way between two well-known hotspot areas, the Shankill Road (Loyalist/Unionist/Protestant) and the Falls Road (Republican/Nationalist/Catholic). This section of wall is covered from top to bottom in graffiti and personal messages from visitors and locals, which is strikingly reminiscent of the Berlin Wall. 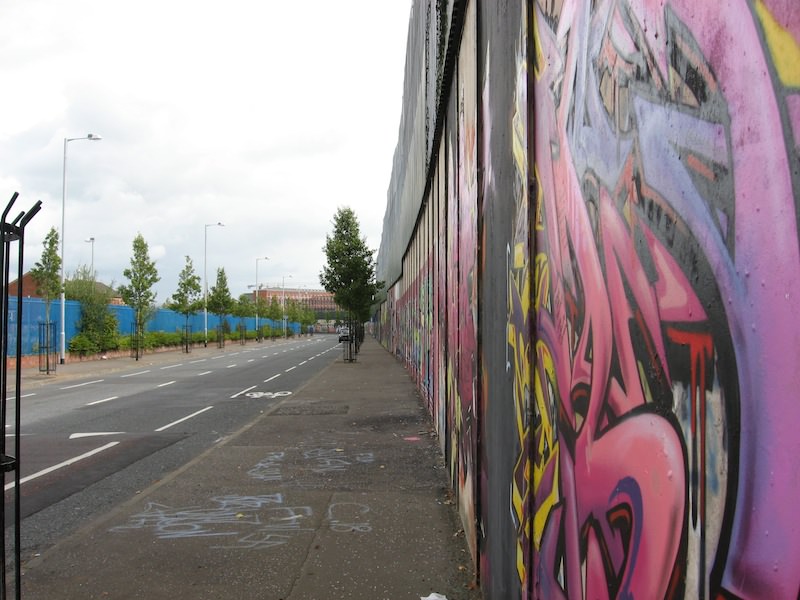 Protestant side of the Peace Wall on Cupar Way

The safety of visiting the peace walls is somewhat questionable at times. There has been violence in Belfast as recently as June 2011. However, I walked from the city centre, through the Shankill/Falls areas, and right up to the wall on Cupar Way without any issue or fear of danger. Alternatively, there are dedicated black taxis that will provide a tour of the area and drive you to the wall. Adding my own message of hope to the wall was one of the most meaningful events of all my European travels. The Belfast peace walls, of course, represent the conflict of one particular city, but also call to mind the walls that currently stand in Gaza and other areas of conflict around the world. 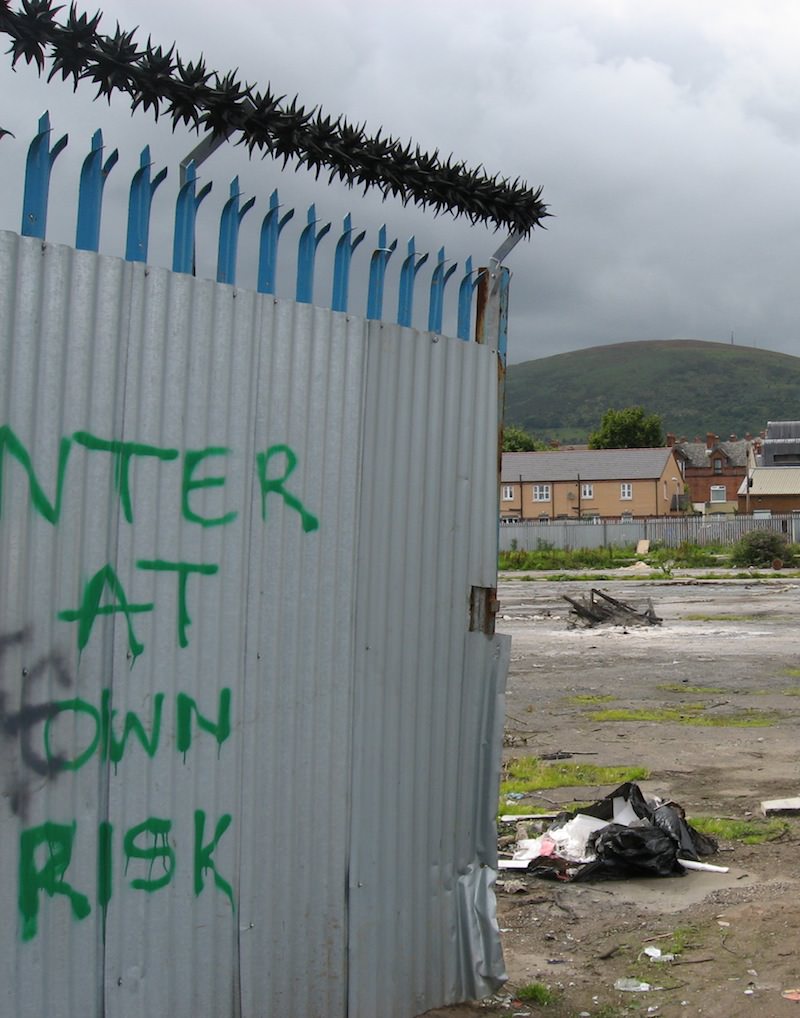 Desolate area near the Shankill and Falls neighborhoods

There are hundreds of murals distributed across the neighborhoods of Belfast, which are best visited by bus tour. This way you can see as many as possible and learn about their history and significance from an experienced guide. In most of the mural neighborhoods there is a confusing and paradoxical mixture of truly lovely people and overtly violent, divisive images. It may be slightly unnerving for tourists who have never witnessed conflict to encounter murals of gunmen painted intentionally to look as if they’re shooting right at the onlooker. The following are a selection of famous images and a good example of the graphics that you’ll encounter across the city. 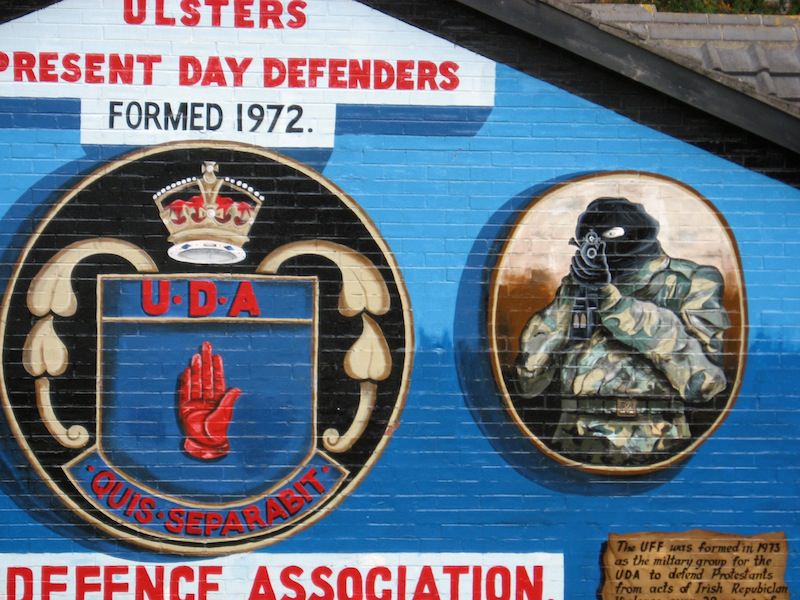 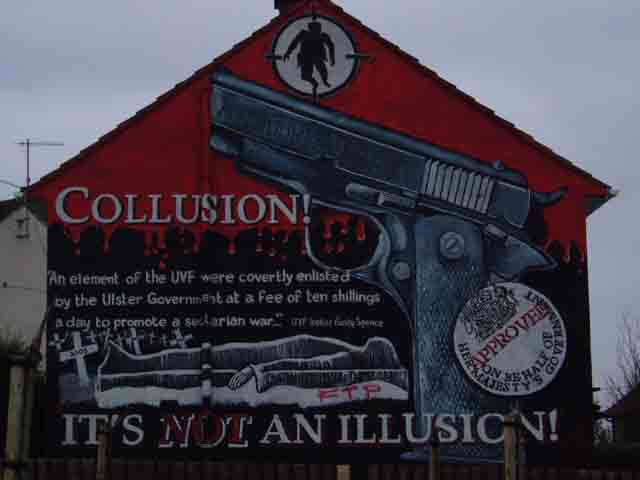 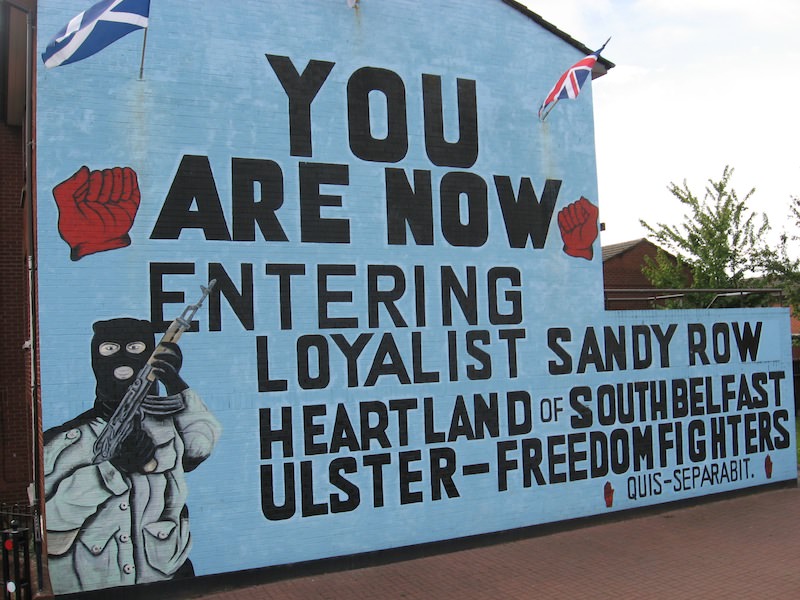 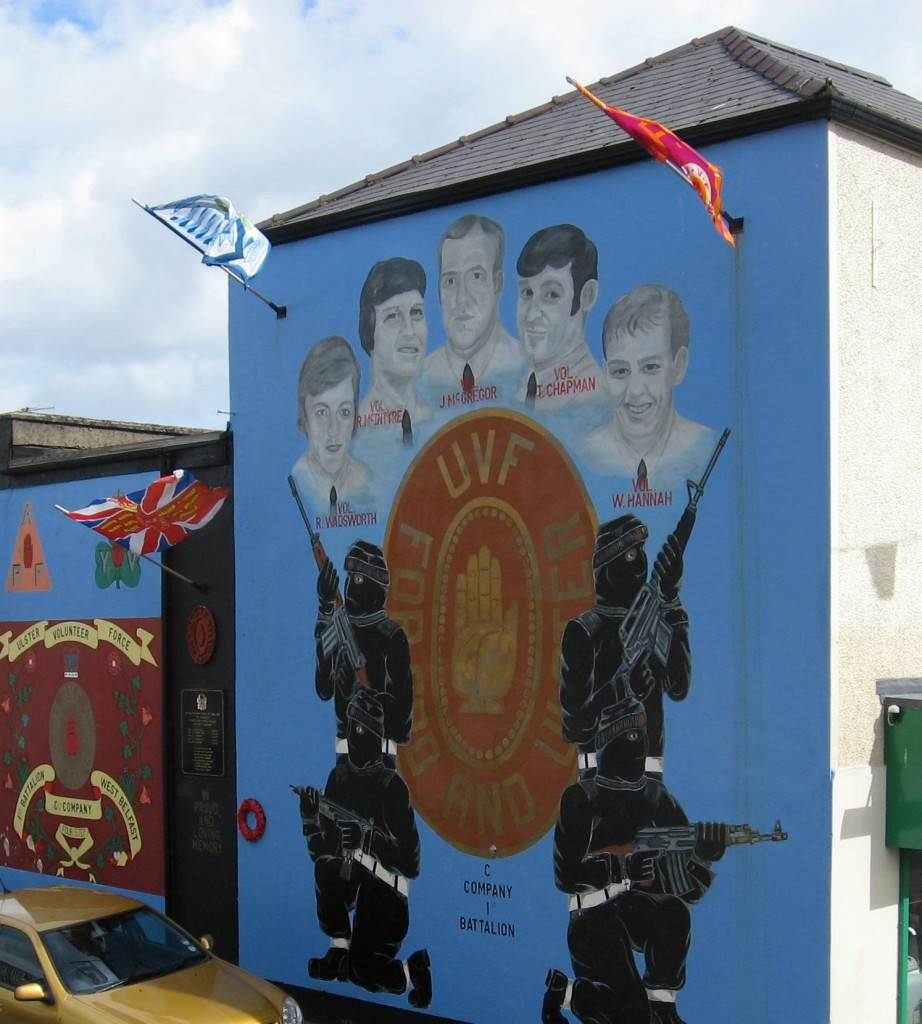 Mural of the Ulster Volunteer Force (UVF). The UVF carried out the bombing of the Nationalist-oriented McGurk’s Bar in 1971, which resulted in the highest death toll of any single attack during the Troubles 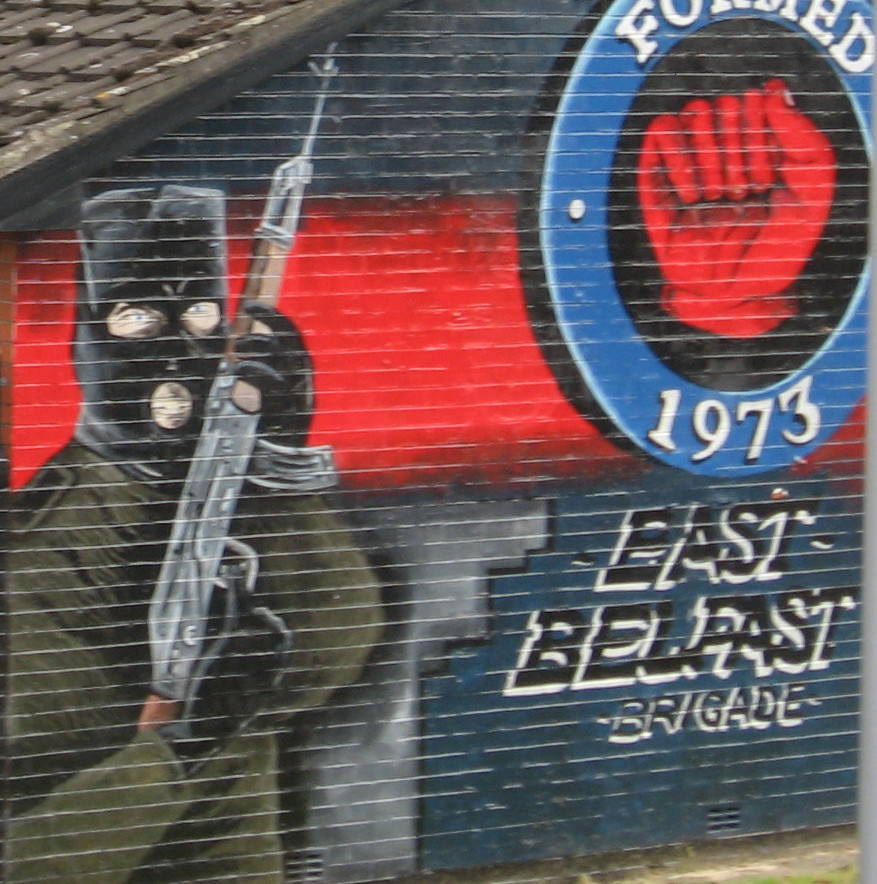 Loyalist mural depicting the ‘Red Hand of Ulster’, a symbol derived from Irish folklore and historically linked to the Ulster clan. The ancient image was adopted by Loyalist paramilitary groups, such as the UDA, who are responsible for the mural above 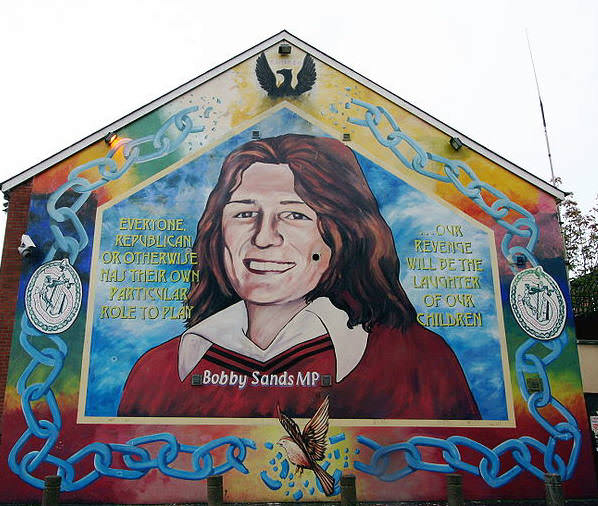 A Nationalist tribute to Bobby Sands on the Sinn Féin building on the Falls Road. Sands was a member of the IRA and an MP in the British Parliament, who died in the 1981 Hunger Strike. The statement on the mural reads: ‘Everyone, Republican or otherwise, has their own particular role to play . . . our revenge will be the laughter of our children’. 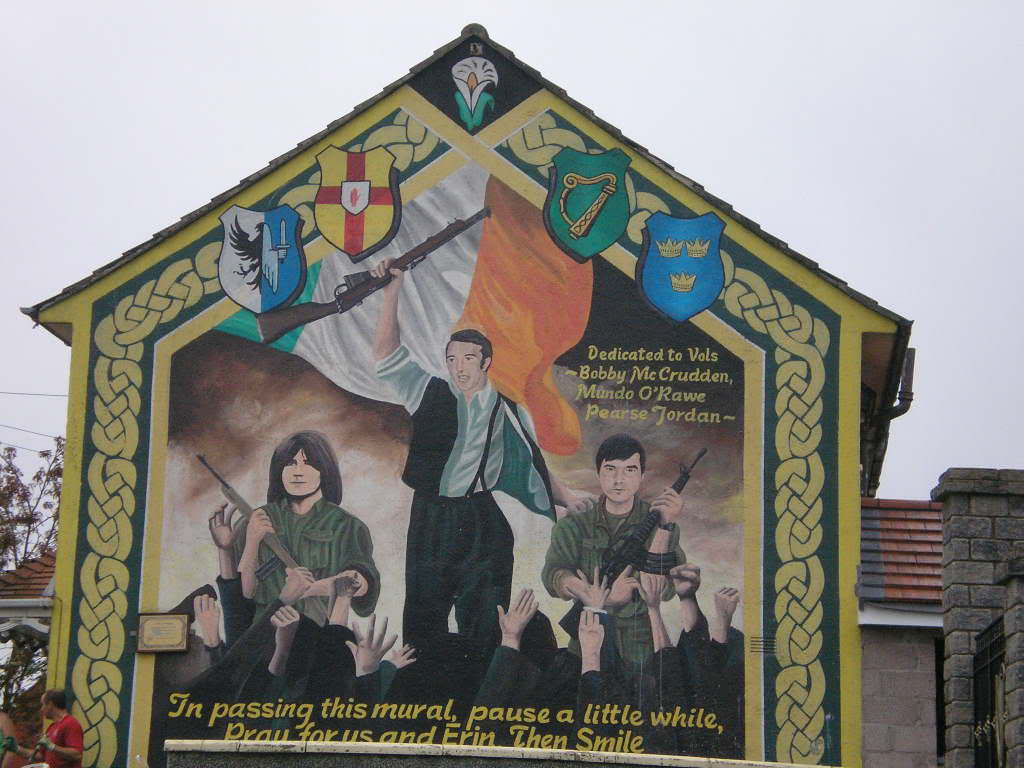 Nationalist mural Dedicated to IRA volunteers Bobby McCrudden, Mundo O’Rawe, and Pearse Jordan. McCrudden was killed in a shoot-out in 1972. O’Rawe and Jordan were both shot on the Falls Road in 1973 and 1992, respectively.

When viewed in isolation, the above murals paint Belfast as a grim, hostile city, which is often how Northern Ireland is perceived in popular media. However, that’s not the full story. There are several socio-cultural and peace-inspired murals across the city, along with a strong feeling that communities are beginning to express a desire to move beyond the need for walls and threatening murals to maintain peace and safety. 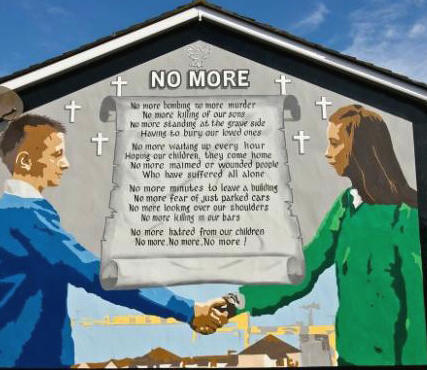 ‘No More’ Mural at Kenilworth Place off Newtonards Road. This mural is a recent development based on two real-life individuals, a boy from East Belfast (Protestant) holding hands with a girl from Short Strand (Catholic). The Newtonards-Short Strand area was the site of the major riot of June 2011 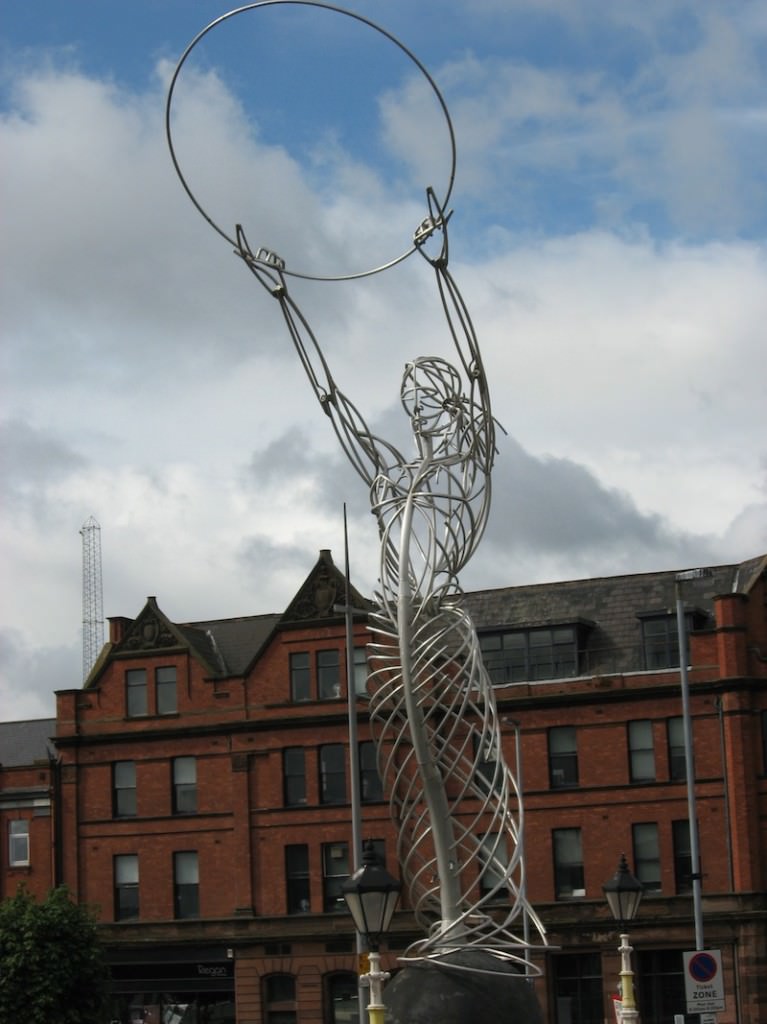 The Beacon of Hope sculpture in Thanksgiving Square, which was dedicated in 2007 to promote peace and gratitude 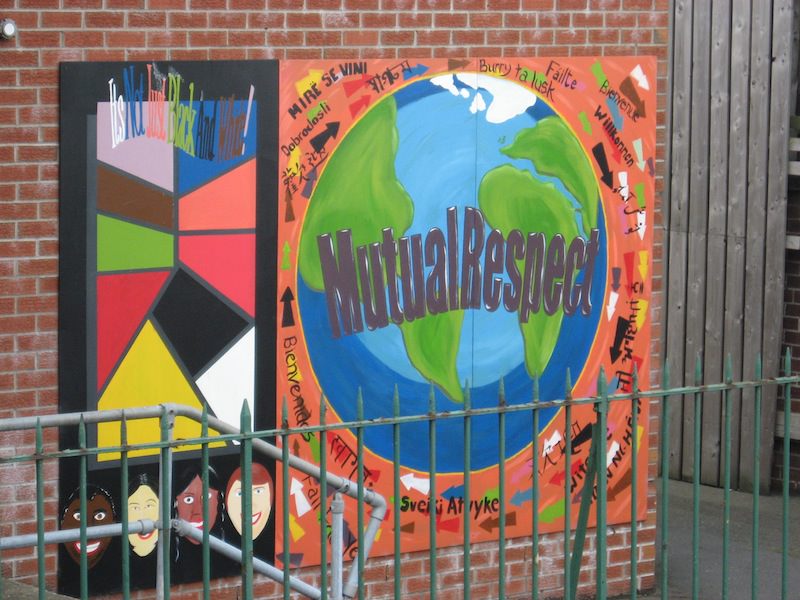 Mural along the Falls Road promoting mutual respect and acceptance

A visit to Northern Ireland is always a rewarding and memorable experience. The amiable people and refreshing countryside make it hard to leave and will constantly draw you to return. Belfast delivers the characteristic loveliness of Celtic culture in the midst of a complex socio-political situation. With its mixture of friendly people, beautiful landscape, complicated history, murals and peace walls, and exuberant spirit, this city is unlike any other in Western Europe. 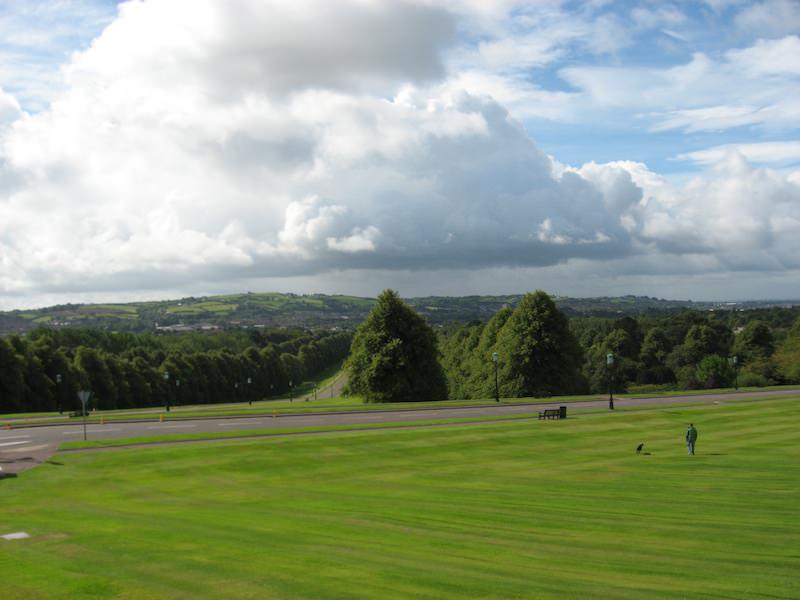 I actually ended up living in Belfast for a couple of years a while ago and can confirm that it is a lovely city.I agree with what you say Erin about the stillness and quitness of the centre. It took me a few days to work out what was so strange about it, until I finally realised that just about everyone speaks in hushed tones. This is so unlike other places I have been to that it took some getting used to. I was planning on seeing somewhere new but reminiscing about Northern Ireland has made me think that I might end up going back there for a few days and trying some whiskey and fifteens (not at the same time)

Wow, who knew there were so many murals in Belfast?  The Mural for Peace is especially beautiful.