High in the Apuseni range of mountains in western Romania, between the cities of Cluj-Napoca and Deva, lies a dramatic area rich in wildlife and full of geological curiosities. It is inhabited by hardy villagers skilled in 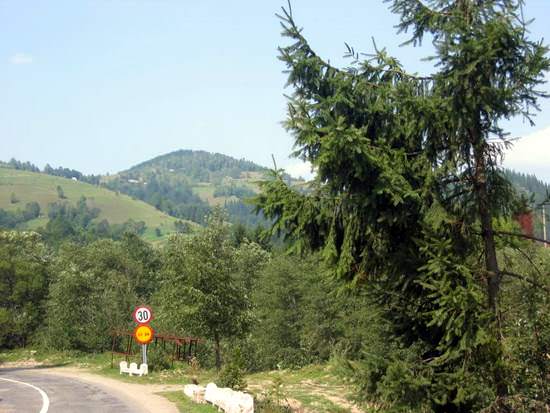 logging, woodworking, precious metal mining, and rearing sheep and cattle. They are the Moti people (pronounced motz), and the area is called Tara Motilor: the land of the Moti.

Tall trees – pine, beech and oak – are everywhere you look, and locals are skilled in fashioning wood into things they use in everyday life: pitchforks, spoons, two-handled tubs, chests, barrels, pails. Houses, too, are frequently made of wood, generally without nails. Wooden waterwheels harness the swift mountain streams to drive mills. And wood is used to make the area’s traditional musical instrument, the tulnic, a pipe several feet long that is blown in a style reminiscent of a didgeridoo (Austrailian wind instrument). Another plentiful local material – sheepskin – is used to make the tall hat, called a caciula, worn by many Moti men. 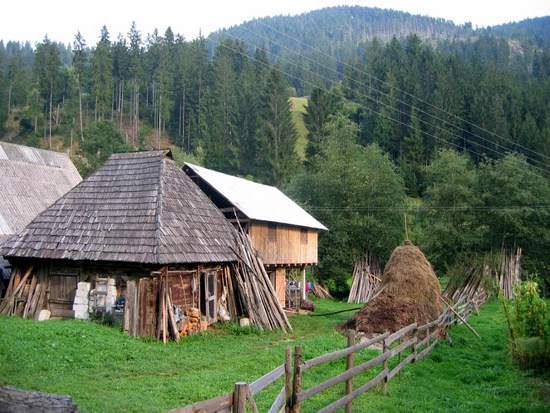 The Moti people have settled surprisingly high up in the mountains, building their houses, with their pointy straw roofs, into the steep inclines. The remote communities are mostly self reliant, but people sometimes go to a nearby town to buy supplies, with a big spree in the autumn as they stock up for winter.

Every household has horses and the horse-cart is the most common way of getting around. Loggers will pile the trees they have felled onto carts that consist of little more than two pairs of wheels, while sitting on the logs as their horse pulls them home. Families also have one or two cows, which roam free most of the day. After grazing by the river, the cows wander home in the late afternoon to be let into the backyard by their owner. Besides serving as the cow’s living quarters, backyards often contain little sawmills. 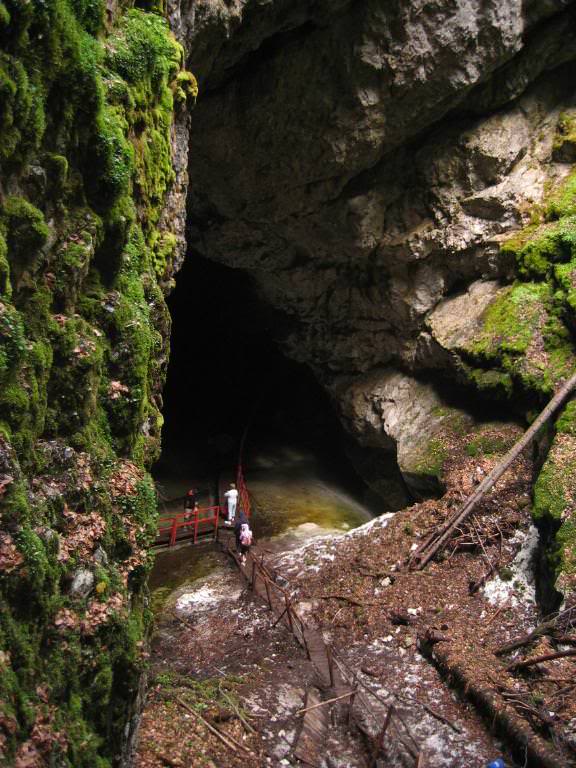 The region’s most famous attraction, the Scarisoara cave, is one of about 4,000 caves that riddle the local terrain. While many of the caves have stalactites and stalagmites, the Scarisoara cave contains a massive glacier with a volume of about 2.5 million cubic feet. It has never melted in over 3,000 years. Exploring the cave leads you to the “church” at the back, with intriguing pillar-like formations.

The Scarisoara cave lies at the end of a road that is so rough and steep it is best to take a jeep. Once you reach the cave, the procedure is to wait with other visitors for one of seven allotted time slots each day, between 9am and 5pm. Batches of tourists are allowed to descend the ladder to the cave entrance. If there are more than 20 people, a guide – who only speaks Romanian – goes with them. At the guide’s hut you can buy brochures and books, but the nearest place to buy refreshments is the village of Scarisoara itself, a few hundred yards down the hill. 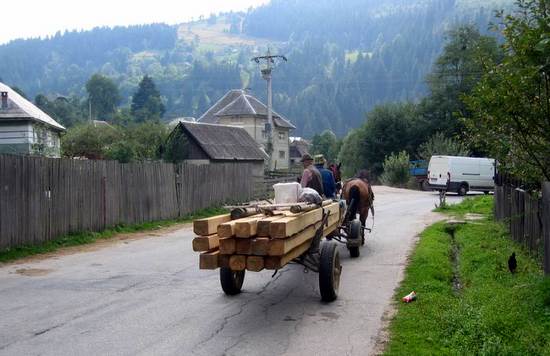 Another attraction for which Tara Motilor is famous, is the “girl market” that has occured every summer, for untold centuries, at the top of the 4,870 foot high Gaina mountain. The fair was traditionally, at least in part, a matchmaking opportunity. Occupied with the daily rigors of watching their flocks, chopping trees, or creating handicrafts, the Moti people did not get out of their own communities very often, so this gathering of families from the surrounding region was a good way for young folks to meet a mate. But the fair has wider significance as a celebration of Romanian rural culture while providing an occasion for music, dancing, and trading. Held on the Sunday nearest July 20, the fair is opened with a tulnic chorus at dawn and then continues till evening. 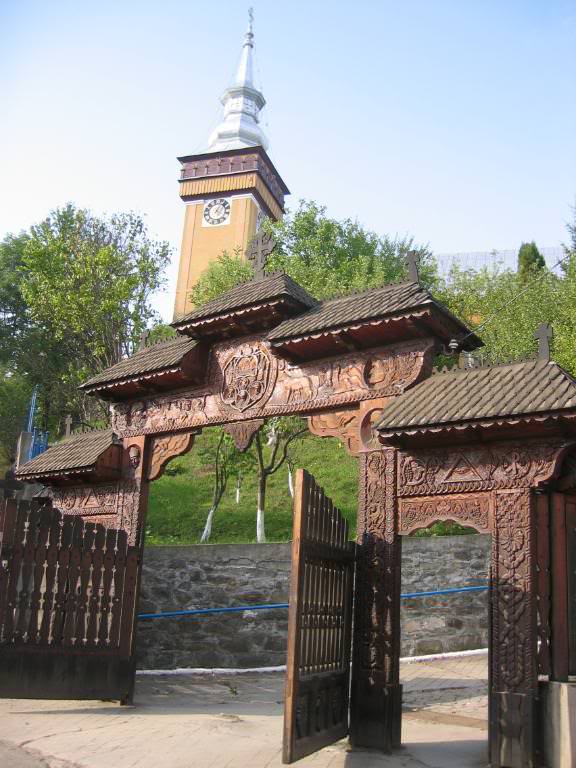 Campeni, the major town in Tara Motilor, is home to just over 8,000 people and consists of a few streets arranged around a green, restful main square. Nowhere in town are you out of sight of the surrounding hills, thickly coated with trees. Nor are you ever far from a bar or café with an outdoor terrace or balcony from which those views can be admired. Two such bars are at the town’s two hotels – the decaying concrete block building of the Tulnic, and the more appealing, homey, two-star Hanul Motilor. On summer evenings, a veteran fiddler does the rounds of the watering holes. Campeni’s Romanian Orthodox church is on a small hill and is thus easily spotted. Its wood gate is adorned with carvings of important national events and heroes. 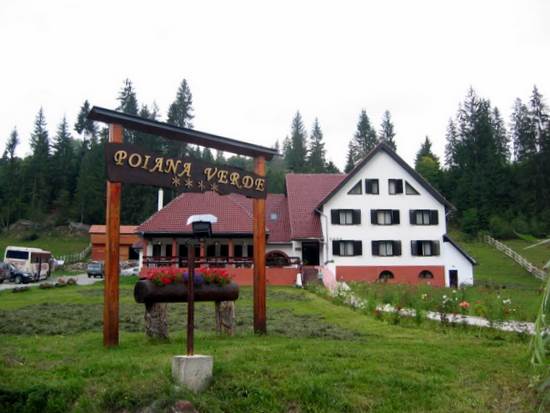 Possibly the best hotel and restaurant in Tara Motilor is the Poiana Verde. Located on a road between the villages of Albac and Horea, the 16-room hotel is built in a style based on the traditions of region, but also offers modern facilities, including internet access. The hotel organizes activities like horseback riding and trout fishing. And its excellent restaurant includes a deck, where you can dine while gazing at the mountains and watching horse-carts drive down the road.

In the village of Garda de Sus, almost every other house is a guest house (pensiune), usually with its own homespun restaurant. The village is quite attractive with a pretty, wooden church constructed in 1792. Its interior features naive paintings. The nearby village of Albac holds several guest houses, of 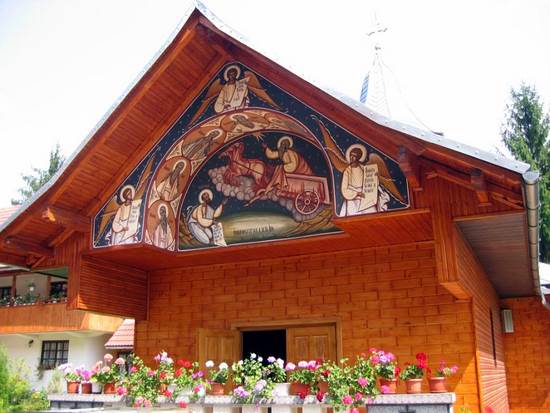 which the best is probably Steaua Ariesului.

While in the region, you might want to visit Lupsa, home to an ethnographical museum, which displays traditional woodwork, clothing, and tools used for farming, mining, carving and fishing. There is also Zlatna, home to a famous church that dates back to 1424 and has frescos painted in the 15th and 16th centuries. There is a new monastery – opened in 2005 – just outside Albac, and older ones at Lupsu and Posaga. At the Posaga monastery, the monks are versed in the art of exorcism.