One of the benefits of meeting up with locals while traveling is that they take you to places you’ve never heard of, like Les Baux de Provence. Well, to be fair, I had heard of Les Baux de Provence while I was living in Saint Tropez. At the time, I figured that I had already seen and enjoyed the walled medieval village of Carcassonne,

and that there was no urgent need to visit Les Baux, considering the fact that the descriptions of the two towns are strikingly similar. Thanks to our Provençal travel companion’s suggestion to visit this time around, I had the chance to prove my then 20-year-old self wrong and spent a memorable afternoon in this unique village. 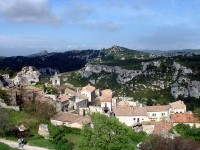 Though smaller than Carcassonne with fewer restaurants and shops, Les Baux de Provence is just as rich in beauty and history. Just outside of St. Rémy, the winding road that leads up to Les Baux de Provence takes you through scenic vineyards and olive groves. I suggest a stop at the Cave Vignoble Sainte Berthe (vineyard) where you can sample their wares in an intimate setting. Les Baux de Provence gets its name from the baux (large cliffs), a term that also lends itself to the aluminum ore, bauxite, which is prevalent throughout the Alpilles region. Because of its elevated position, Les Baux de Provence offers breathtaking views of Les Alpilles, a chain of limestone hills running east-west; an extension of the Luberon mountains.

As we entered the village, we were greeted by narrow cobblestone streets, small cafés, souvenir and artisanal shops selling Provençal tablecloths, clothing (I bought a fabulous Provençal skirt!) and santons (small figurines typical of this region). One of the most celebrated shops in the village is that of Santonnier J. Peyron– Peyron himself is almost always in the shop and you can watch him make santons as you browse thousands of impressive figurines.

The main tourist attraction is the chateau-fortress, which is more impressive when 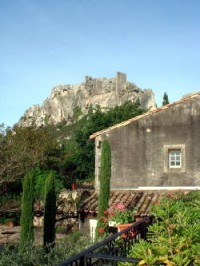 viewed from outside the confines of the village. Les Baux de Provence was used as a strategic defense site throughout history. The first inhabitants were believed to be the Celto-Ligurian peoples (there are both Celto-Ligurian and Roman necropolis near the village), followed by the Gallo-Romans (as evidenced by Roman burial tombs and monoliths). During Medieval times, the Baux family ruled between the 9th century and 1426. After this, Baux was integrated into the rest of Provence (thus becoming Les Baux de Provence) and officially became part of France in 1481.

You can easily visit the major sites and shops in the town within 2-3 hours. If you wish to spend more time, there are a variety of options for you. 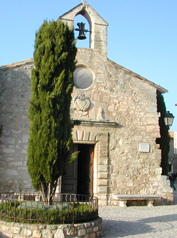