Corfe Castle in Dorset, England is not only the name of a small village, but also the stunning ruined castle that rises high above it.

Located in the Isle of Purbeck, and built from the local limestone (called ‘burr’), the ruins of Corfe Castle stand high atop a steep chalk hill, with a defensive ditch surrounding it. The natural hill couldn’t have been a better place for the site of a defensive castle and views of the building can be seen from miles around. 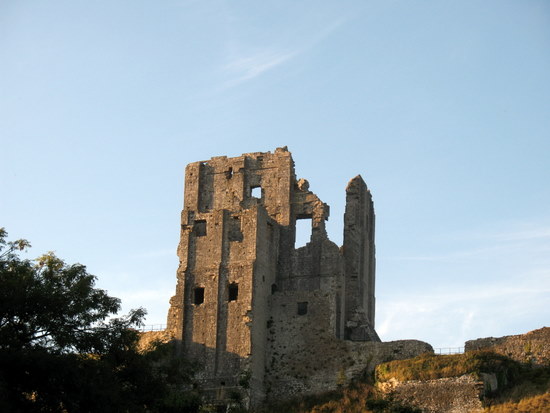 Side view of Corfe Castle

Corfe Castle is a wonderful castle to explore and, since 1982, has been owned by the National Trust. In the past few years, it’s not been possible to walk around the whole of the ruins, as parts have been cordoned off for conservation work. But after two years of work, the essential conservation has been completed and now visitors have free rein to explore all the accessible nooks and crannies.

Although it is largely in ruins, you can easily make out where the key areas of the castle originally were and you can certainly get a grand impression of how things used to be as you walk up to the first gatehouse and then cross over the bridge, or drawbridge, to a path leading to the castle. 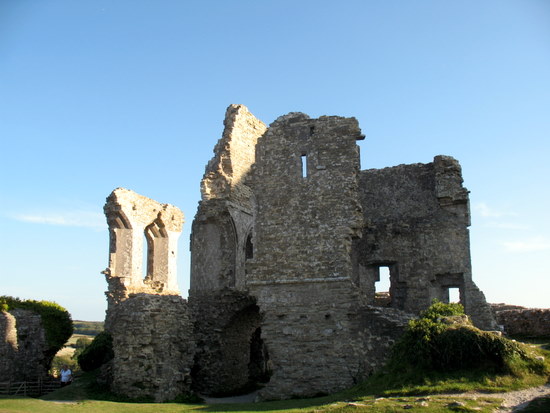 Stone paths wend their way from the gatehouse upwards and, as you reach the upper levels, there are stone steps to climb, followed by some wooden steps which take you through part of the building. It’s up to you in which order you explore the ruins and you can take your time as you go. On a clear day, the views are fantastic, both across the village buildings, down towards the Swanage railway (which runs to Corfe Castle), across farmland and on to the sea at Poole in the far distance.

In some areas, the signature medieval arches and architectural features are clearly visible as are the archer holes in the fortified walls. 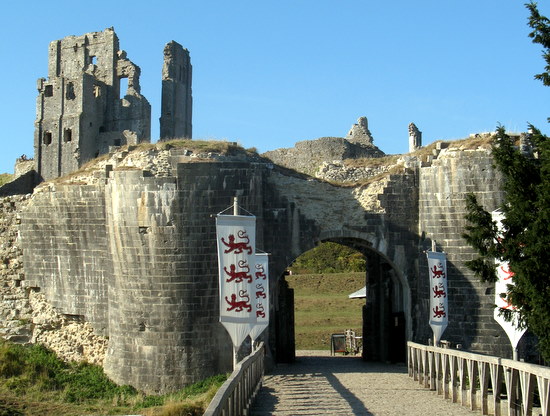 The old hall was first built in 1066 by William the Conqueror, while his son, Henry I, built the keep, King John built the gloriette and Edward I built the outer and southwest gatehouses, which resulted in a two story structure with arrow slits, a murder hole and a drawbridge.

Corfe Castle was actively used for 600 years, successfully standing up to numerous battles and sieges. It is also alleged that King John kept his treasures here and he imprisoned his niece, Princess Eleanor, here. The castle was a major fortress until 1572, when Elizabeth I sold it to her friend and chancellor, Sir Christopher Hatton. Later, In the 17th century, it was owned by the Bankes family, but was subsequently destroyed during the English Civil War by the Parliamentarians. 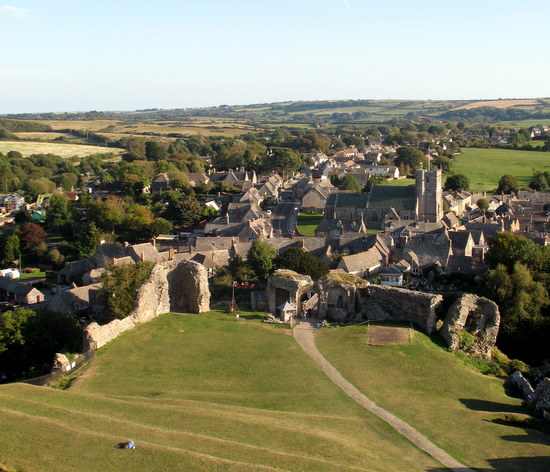 View from the top of Corfe Castle

After exploring the castle, it is recommended that you check-out the visitor centre located next to the car park, where you can learn more about the history of the castle through interactive exhibits and view some of the artifacts discovered by archaeologists.

If you want to make a day of it, Corfe Castle village offers quaint shops to wander around, a lovely old tea shop selling scrumptious cakes, teas and lunches, plus there are plenty of walks to enjoy.

Written by and photos by Rachel Newcombe for EuropeUpClose.com

Sir john Banks is one of my ancestors. THOMAS C BANKS was my grandfather. ROBERT GLEN BANKS WAS MY DAD. I HAVE a banks scrapbook and was looking throw it. NEAT THANKS BILLY J BANKS

Purbeck and Swanage have been favorite holiday destinations for me ever since I was a child, now I live just an hour and a half away and spend many a weekend in the area.

To all those who don't know Purbeck of Corfe pencil it in as a must do, there are some wonderful places to see, Steam Railway, traditional beach holidays, Bournemouth, Poole and Weymouth not too far away.