You don’t have to be an oenophile to appreciate sightseeing in the Veneto region of Italy along the Strada del Prosecco. Italophiles of every potable persuasion will delight in the 31-mile road as it winds its narrow way amid soft hills sprouting from rich dark soil, medieval towns and churches, local artists, ancient architects, 15 towns, 15 castles, 500 communities, a haunted tower, and – naturally – the vineyards of this area’s some 3,200 farms. 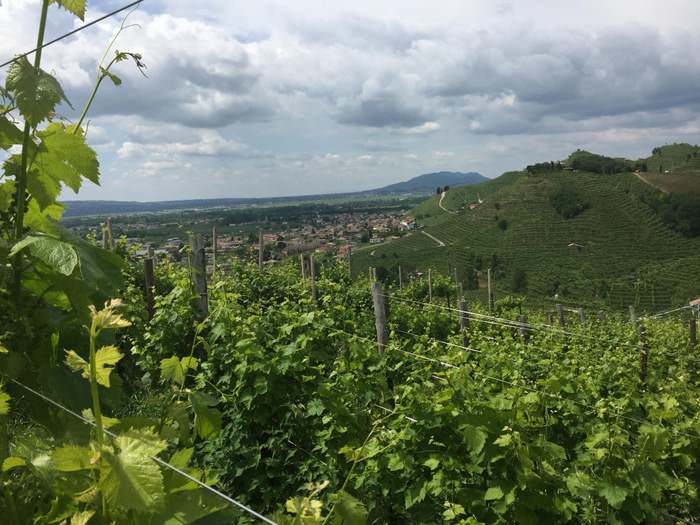 The entire Conegliano-Valdobbiadene area is considered one wine city

Sightseeing in the Veneto

Whether you drive, bike, hike, horseback ride, or some combination of the above, you will absorb an epicurean lesson in cultural history. Before embarking on the official Strada del Prosecco heading west from Conegliano, you might consider a quick deviation north to Vittorio Veneto, less than eight miles away. Vittorio, as it is known, came into existence 150 years ago, in 1866, when two communities — Seravalle and Ceneda — decided to merge. The part that was Seravalle is one of the best-preserved old town centers in the region, and its cathedral includes an altarpiece by Tiziano. The part that was Ceneda also has Renaissance splendors, including works by Cima di Conegliano, a castle and churches, as well as a modern art museum, the Galleria d’Arte Contemporanea. 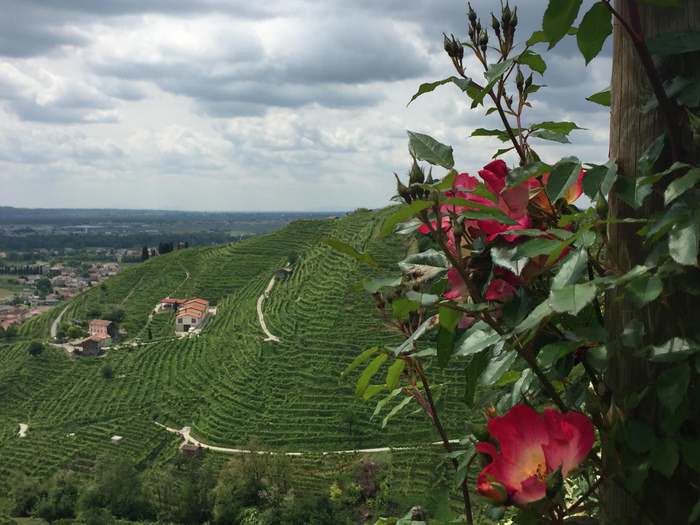 Leaving Conegliano, the starting point of the Prosecco road, you will first pass Collalbrigo, an all-but-abandoned hamlet about 10 minutes west of Conegliano by car. Its major attractions are its setting and elevated position, so bikers and walkers might plan a picnic lunch there before continuing.

Wine enthusiasts may stop en route at the Scuola Enologica di Conegliano, Italy’s oldest wine school, founded in 1866. Its 140-year history pales in comparison to the local white wine culture dating back to Roman times. Some of the school’s events are open to the public, so it’s worthwhile to check their schedule in advance.

Four miles north of Collalbrigo is San Pietro di Feletto (also spelled Felletto). The hills become increasingly imposing, testimony to the ancient glacier that formed the valley through which the road serpentines. You will pass many trattorie and osterie to restore your energy, whether or not you are biking. Secondary paths are recommended for hiking purists; maps available through the Strada del Prosecco tourist office.

The main attraction here is the Pieve Romanica, a Romanesque century church with murals and frescos, both interior and exterior, dating from the 13th to the 15th centuries. Four other churches, three chapels, and six ville Venete (Ventian villas) will captivate architectural aficionados. The athletically inclined can explore nearby caves and trails when sightseeing in the Veneto. 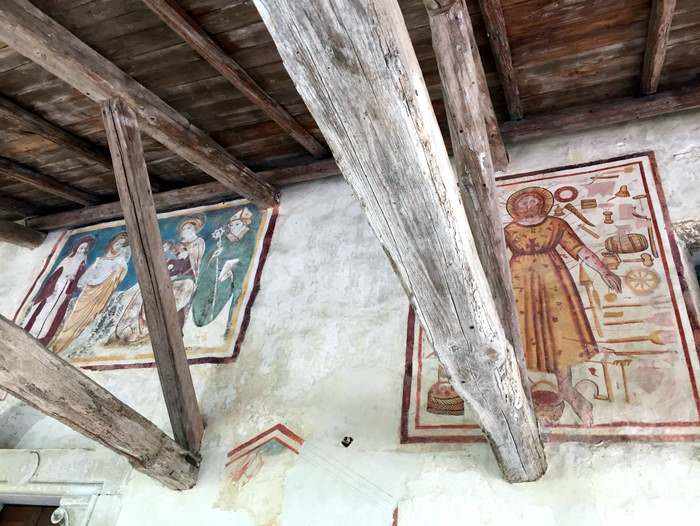 Frescoes from the Pieve Romanica in San Pietro di Feletto

Just south of San Pietro di Feletto is Refrontolo, with hiking possibilities and a 17th century mill carved in the rocks, the Molinetto della Croda. Heading west to Solighetto and Soligo, you will pass stretches of woods that have reclaimed long-abandoned vineyards. Don’t let the scenery distract you, though; the two-way road has space for only two small cars at a time. If one vehicle is a bus, the other has to back up or drive off the road, an impossible maneuver on the slopes. In compensation, there are many trails to hike and one to run, and an old wooden bridge. The hills are so steep here that grapes must be hand-harvested. Despite the difficulties, this is the most intensely cultivated area along the Strada del Prosecco, with grapevines everywhere. 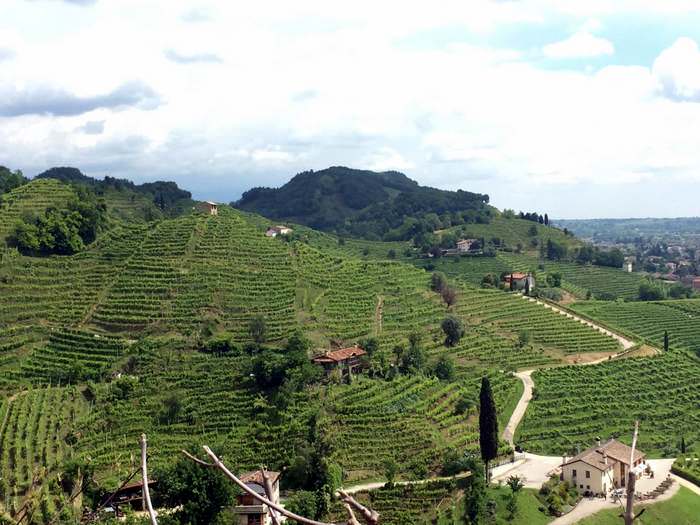 Hills and terraces near Soligo

Three wine cooperatives and a high concentration of restaurants offer respite from the rigors of driving. From the Sanctuario di Collagù (north of Farra di Soligo) you will enjoy a limpid view of vineyards, forests, pre-Alpine mountains, glacier traces, some squat stone houses and white homes with red tile roofs. This is the view chosen by locals to promote their UNESCO candidacy. 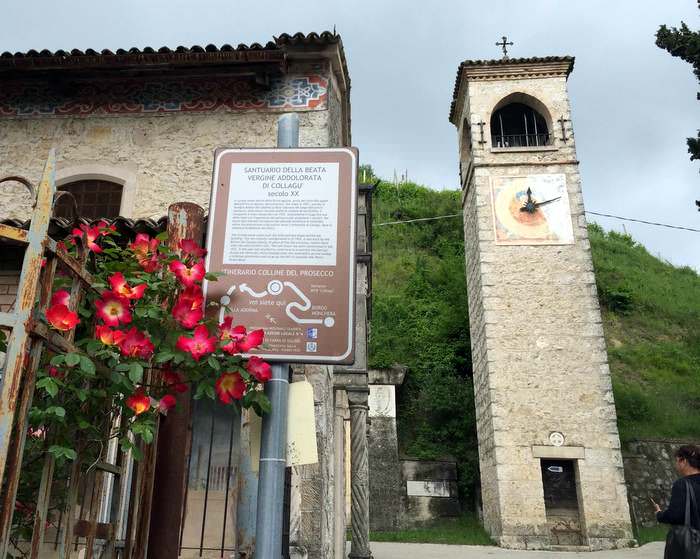 The Sanctuary of Collagù, with its stunning view to the valley below

Tucked away in this green panorama are the 15 castles lying between Conegliano and Valdobbiadene.  Some have been restored, some remain in ruins, and one 12th century fortress has become a five-star boutique hotel – the Castelbrando in Cison di Valmarino.

Arguably the most important is the 13th century Castello di San Salvatore in Susegana, privately owned by the Collalto family but open to the public the third weekend of May for Vino in Villa, the area’s best-known wine event. Within walking distance of San Salvatore is Castello di Collalto, built in 1110 and today a ruin. It is animated by the ghost of Bianca di Collalto, a 13th century lady in waiting to the mistress of the castle. Supposedly the latter suspected a liaison between her servant and her husband, and ordered the young woman to be walled up alive while her husband was away. When the spouse returned, Bianca made her first appearance and has continued to do so through the centuries. 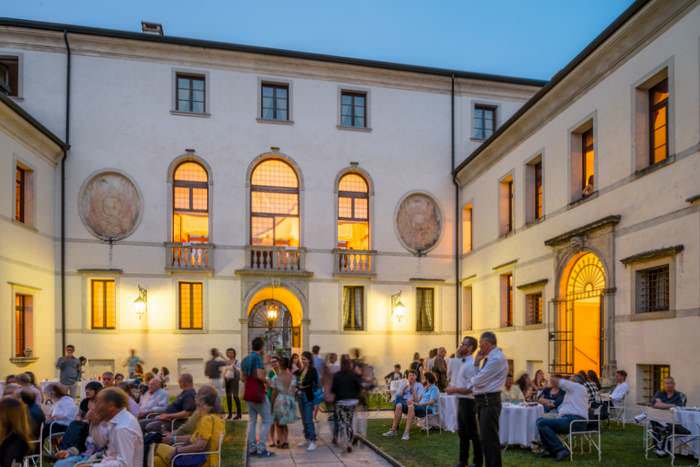 The final destination on the Strada del Prosecco is Valdobbiadene, but Mecca comes a few miles before, on the hill called Cartizze. As all wine lovers know, Prosecco from the grapes of Cartizze’s 107 hectares (260 acres) commands the greatest respect from the wine community and the highest Prosecco prices at retail. It’s all about the hill’s particular exposure to sunlight, its height (1,000 feet), its incline, and the unique soil composition (limestone, clay, and sandstone). A hectare of land costs more here than the equivalent in Champagne – about € 1.8 million in Veneto compared to € 1.2 million in France. So if you are doing any wine sampling at all on the Strada del Prosecco, make sure to include a label or two from Cartizze. 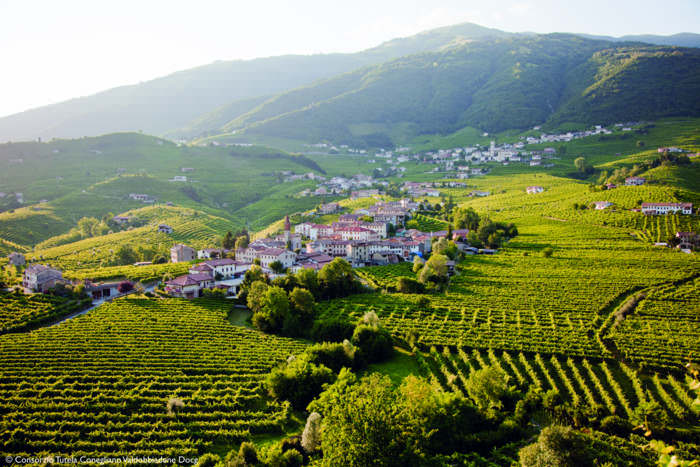 Valdobbiadene has a history disproportionate to its population of 10,400. The first official document mentioning the town occurred in 1116.  Later, the Venetians, the French, and the Austrians all came and conquered, but today wine is the absolute ruler. 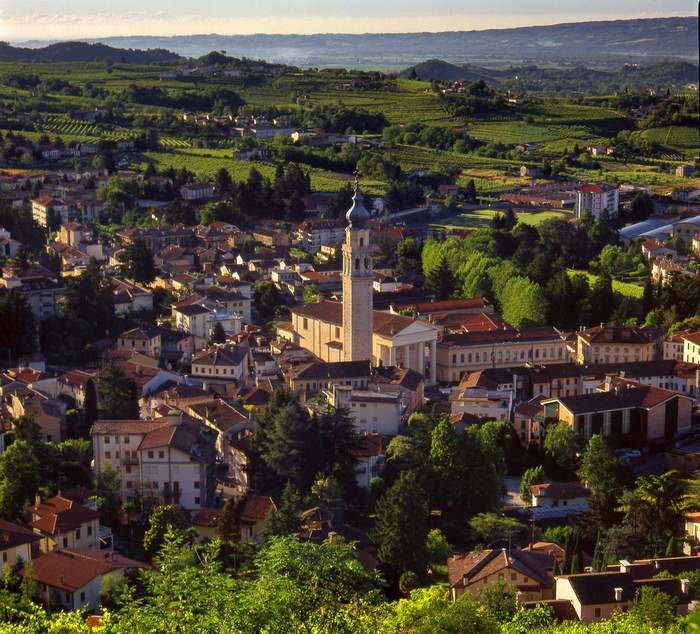 The Valdobbiadene Prosecco Guild was created here in 1946, and celebrates 70 years of activity in 2016. Four Venetian villas and nine churches are venerable footnotes to an architectural tour, and nature lovers can admire six alberi monumentali – trees recognized by the state of Italy for their beauty or historical importance.

I replied to you last week but not sure the message went through. Write to the Strada del Prosecco and ask these questions. You can write in English; they will find a way to reply. How long you want to spend depends on how much time and money you have. Three days or three weeks -- it's up to you. All levels of hotels so depends on your budget and preferences.

Yes there are walking trails and places to stay. Write to the Strada del Prosecco website noted in the article and/or the tourism office for Conegliano. It is okay to write them in English. Timing depends on your interest, budget, and time available.

Are there walking trails in this area and accommodation along the way? How long would you recommend allowing to walk and explore the area? What type of hotels are available. We would be there in June 2017.