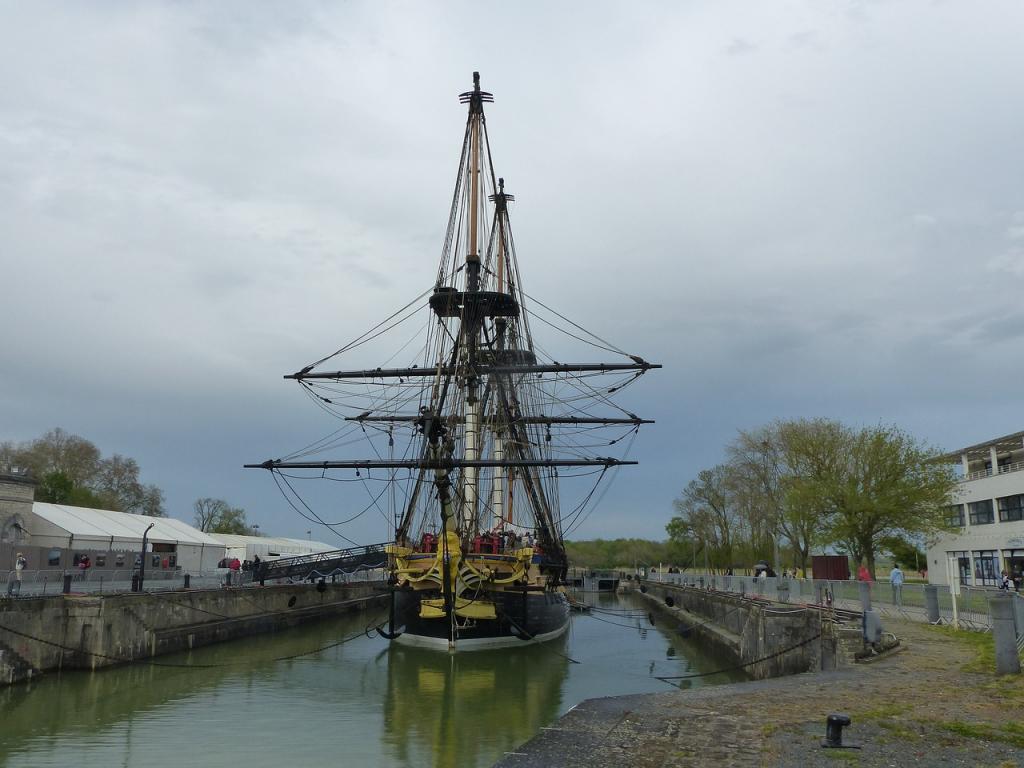 It never fails to surprise me, that an apparently sleepy, provincial town like Rochefort France with only approx. 26.000 inhabitants can harbor such a great variety of history, monuments, art and even eccentricity.

From the surrender of Napoleon in 1815 to launching ships and being the hometown of Pierre Loti, one of France’s most famous and eccentric writers of the 19th century, Rochefort, situated along the idyllic Charente Estuary, has been the center of it all.

Built in the 17th century as a Ville Nouvelle, which means the town was purpose built by royal decree to serve as a naval base and defense post, it’s to be expected that just about everything in Rochefort revolves around a maritime scheme.

Starting with the Arsenal and Cordonerie, a massive line of 17th-century buildings along the shore of the Charente, it was used as a shipyard and chandlery. It is surrounded by parks and gardens, a special place is reserved for kids to plant their own little trees and to learn biology in situ so to speak.

Then, get to your first piece of sightseeing and enter the reconstruction of the Hermione. The ship was built in Rochefort and sent and captained by General Lafayette to America in 1780 to assist Washington in the War against Britain. Mission accomplished, the Hermione sailed to India where she saw more battle until she was wrecked in the Mediterranean in 1792. Reconstruction work is still ongoing which means you can see the craftsmen at work.

There is also a café where you can sit and enjoy the view of the river and the many leisure boats sailing by.

Several other museums, for example, Musee National Maritime, all with a naval theme for those who are interested are located in Old Town Rochefort.

Rochefort’s next claim to historical fame is the Ile d’Aix which lies just offshore. It was here that Napoleon surrendered on board the Bellerophon in 1815, thus putting a rather bleak end his reign of 100 days. You can go on excursions to Ile d’Aix by taking the ferry from Fouras for a 30-minute ride.

Turn through Rochefort’s  Arch of Triumph to explore the city itself. The rather narrow streets are lined with gorgeous period buildings. Many ground floors have been converted into galleries, boutiques, and shops, selling antiques, maps, naval accoutrements, and books. If you are lucky, like me, you will meet a ‘Napoleonic soldier’ in full costume because there are often performances and festivals.

If you happen to visit Rochefort on a market day you are in for a treat. The roads are closed and the entire town center ( Place Colbert) is converted into the most typical French farmers market you can imagine. The best and freshest products are on offer, olives, bread, and countless different sorts of cheeses to mention just a few. And wines and liquors of course.

The stall keepers are very generous with their samples, you can taste your way around the stalls and won’t need to eat again for the rest of the day. In between, street entertainers perform their art to keep locals and visitors smiling.

The Charente estuary where fresh water meets salt water is famous for oyster farms and seafood. You can have a real feast, sampling oysters covered with a very special sauce or giant shrimps and lobster.

Rochefort is the hometown of Pierre Loti, who, in the late 19th and early 20th century was a celebrated novelist in France. He was also a naval officer, diplomat, world traveler and travel writer who even, at some time, trained as an acrobat!

A member of the Academie Francaise he had a special penchant for all things oriental and especially Turkey where he conducted a torrid love affair with a married woman who lived in a harem. This adventure is reflected in his novel Aziyade.

His family home in Rochefort is one of the most eccentric and colorful museums I have ever seen. Just a bourgeois house from the outside, the inside is an incredible mixture of Gothic furniture, a mosque, a Turkish bedroom and haman, and an Indian chamber. It must be seen to be believed. Due to extensive restoration works, it’s now closed but you can watch this video to see the interior.

Loti used to throw big parties in his home, attended by ‘tout Paris’ in fancy dress which brought half of the population of Rochefort out on the streets to watch.

If you want to go further afield, you can visit La Rochelle, or the islands and beaches. Here is some more info on how to plan your day trips from Rochefort.

I wish I could have stayed longer than just 1 ½ days to go on a trip on the river and visit the islands and beaches.

How to get to Rochefort

I flew into Bordeaux and took the train to Rochefort. The train station is a bit out of town, so you best order a taxi in advance.

Where to stay in Rochefort

I stayed in the Hotel Caravelle, one of the most beautiful and comfortable boutique hotels I have ever been in, but here are some additional options for hotels in Rochefort.

Where to eat in Rochefort

If you want to pull out all the stops and try a Michelin star restaurant, go to La Belle Poule.

Otherwise, there are plenty of good restaurants and you can make restaurant reservations for them here (highly recommended and you can do it in English).

Before coming to France, do not forget these 3 important points:

Discover Rochefort France was written by Inka Piesga-Quischotte  for EuropeUpClose.com.

it seems that you enjoyed your trip a lot, even next month me too going there as part of my trip. This article is really help me to get understand about place.