Kentwell Hall is not a “stately home”. But this large red brick manor, about 60 miles northeast of London, near the small Suffolk village of Long Melford, is one of the most interesting old English Tudor manors you’ll ever find. 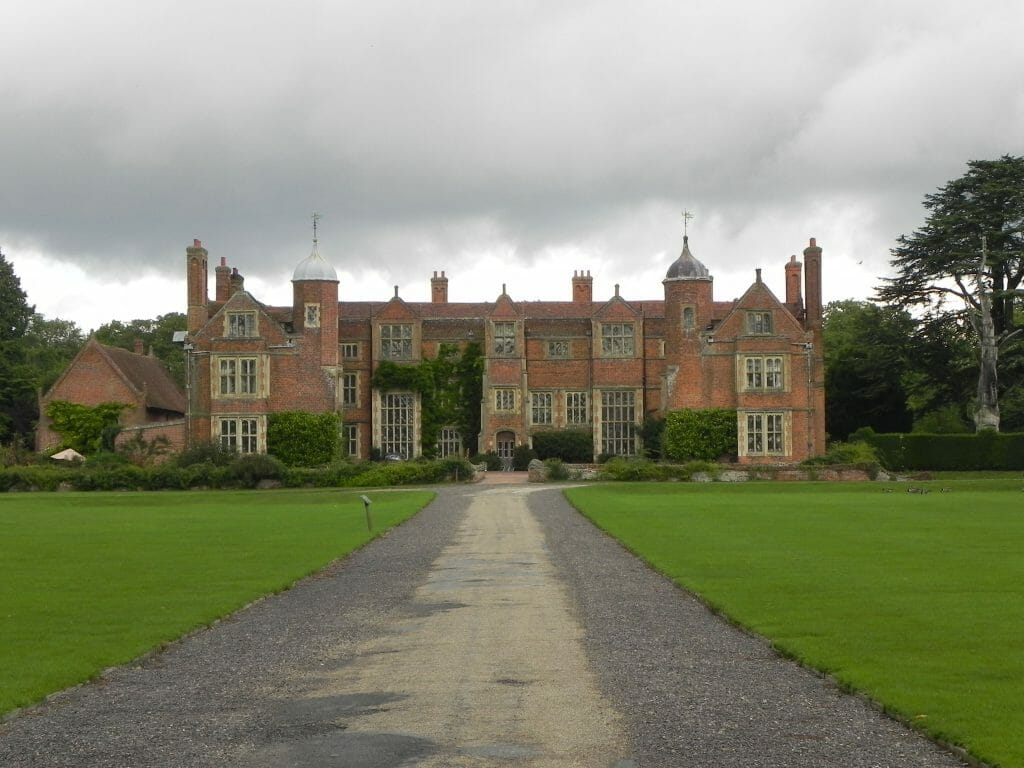 With unique Tudor architecture that, over the centuries has incorporated Gothic and Georgian classical influences, Kentwell has a plethora of interesting novelties to keep you entranced for a whole day. Started in 1500 and completed around 1540 AD, Kentwell Hall boasts a magnificent meeting hall, a perfectly preserved Moat House, a camera obscura, a Dovecote, beautiful walled herb and rose gardens, a farm, and of course the proverbial green moat churning with rambunctious Koi.

The bumpy ¾ mile long avenue leading to Kentwell, lined with a towering canopy of ancient lime shade trees, sets a mood that is best described as atmospheric. Later, I learn these lime trees were planted in 1678, and they’re still the originals. 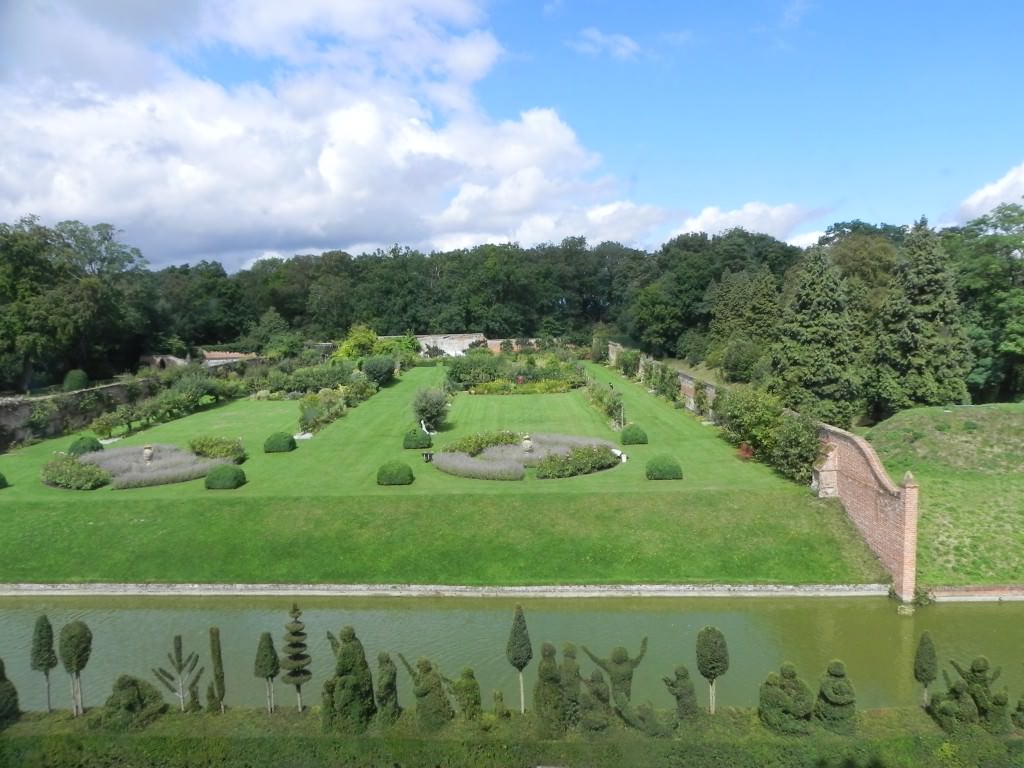 Emerging from the trees, Kentwell Hall looms up in the distance. It’s brick exterior blends well into the countryside, long tentacles of green ivy crawling up part of its frontage. Two octagonal gatehouses stand at either side of the main entrance, and then it’s a longish walk up the gravel road to the house through a large green field. A 15-yard long brick bridge opens onto the large brick courtyard, surrounded by the main hall and two lengthy wings on either side. 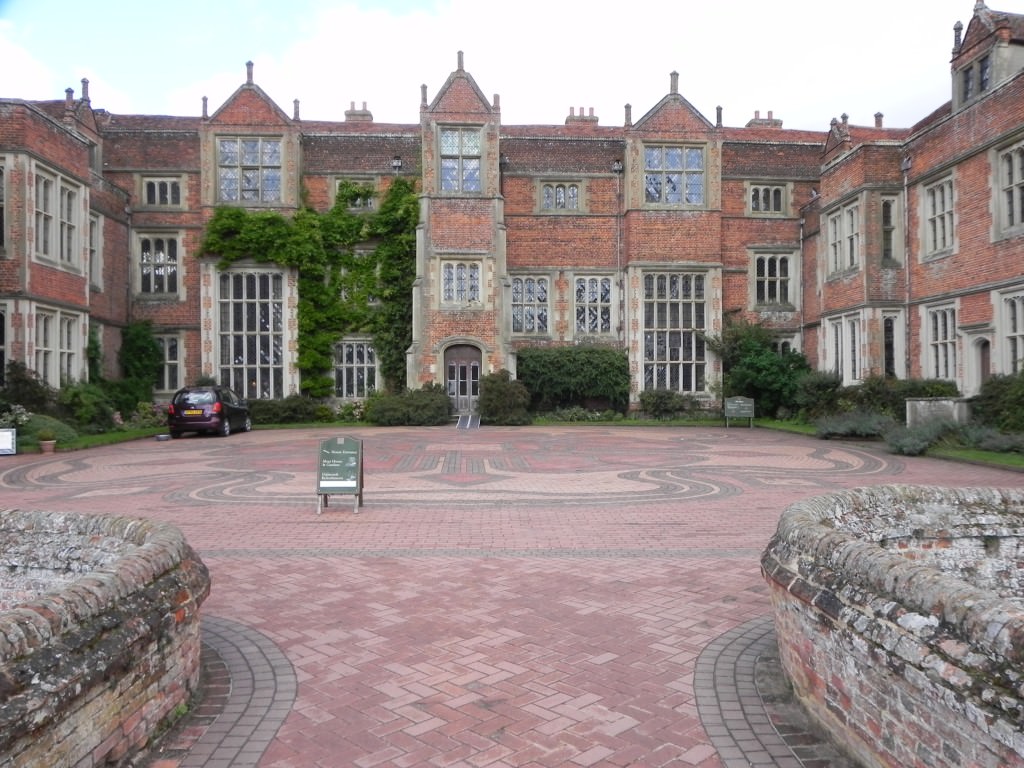 A self-guided walk through the house reveals its medieval treasures: a dining hall, and kitchen complete with enormous fireplace, utensils, and large metal pots and pans. With a little imagination, the room echoes with the bustling sounds of busy kitchen staff from bygone days. 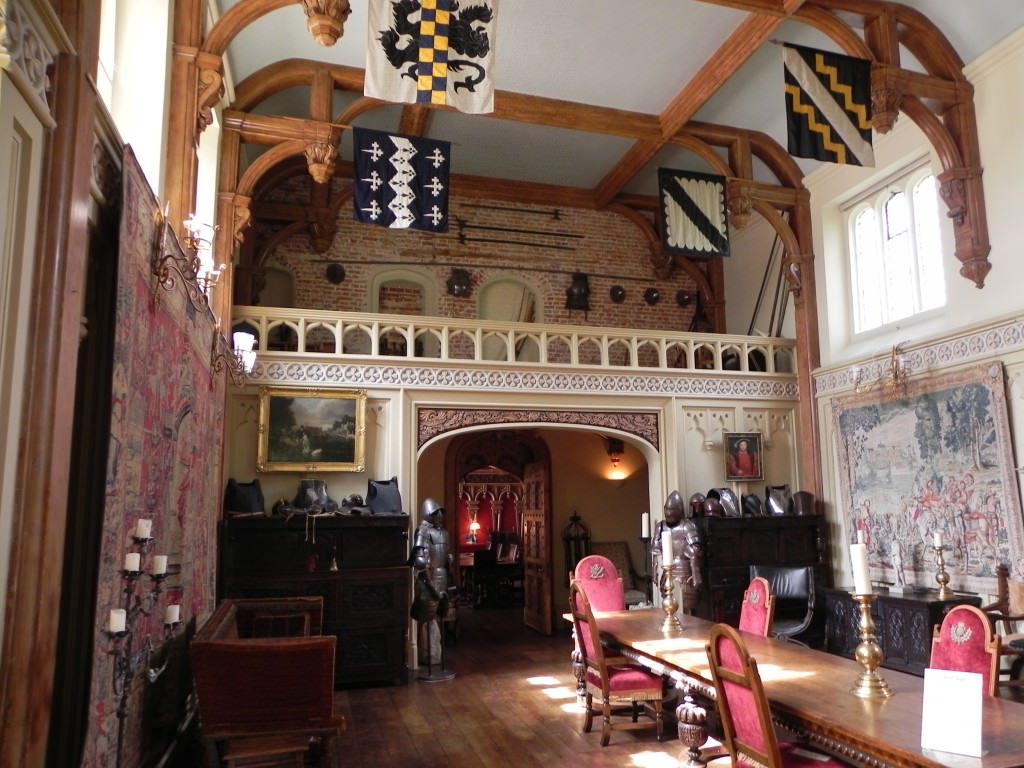 The Drawing Room, furnished in late Georgian style, is also fit for a king. Red wallpaper, Tudor portraits, and a superb deco painted ceiling with Breugel-like pastoral scenes. The rest of the tasteful theme rooms pass by in a blur, and I glimpse the enticing walled garden across the moat.

Outside, the Moat House is an original Kentwell building, dating from 1475. Its fortified garderobe tower allowed occupants to enjoy the dubious pleasure of defending themselves while disposing of effluent directly into the moat. The Moat House has a bakehouse, dairy, brewery, and solar—or sunny room—for drying herbs, quite a rarity in old houses. 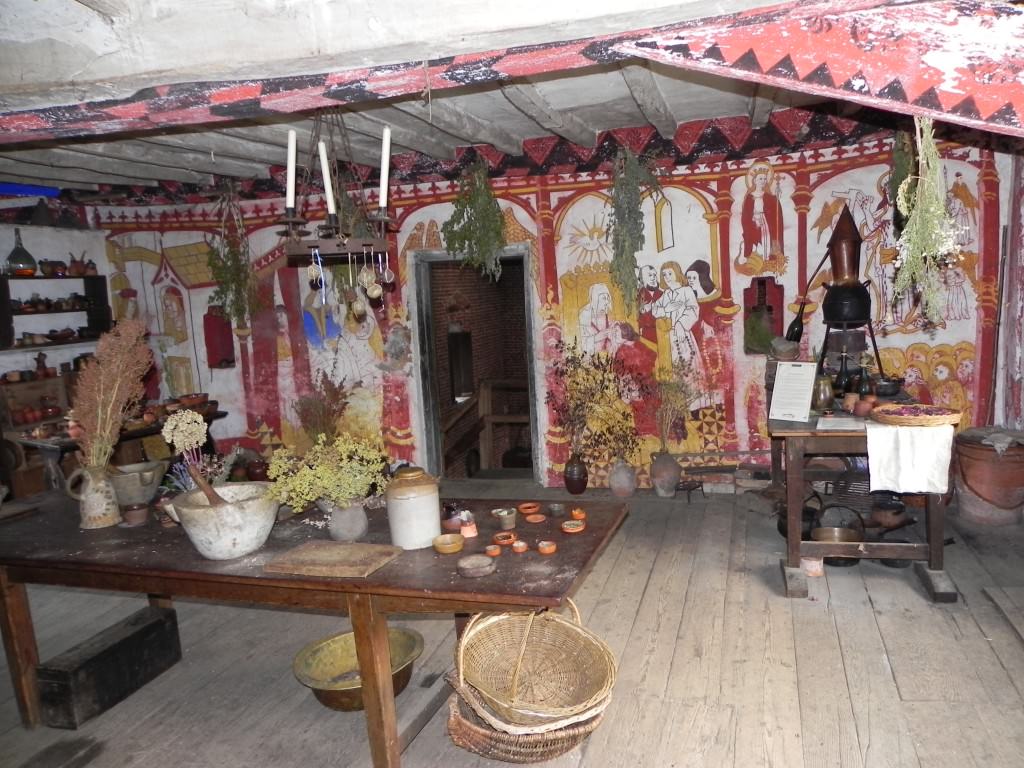 The original moat house features a room for drying herbs

Nearby, I discover the small, six-sided Camera Obscura, a small novelty room where external images of the gardens and moat are transferred through a pinhole in the wall, to be reflected on the opposite wall. 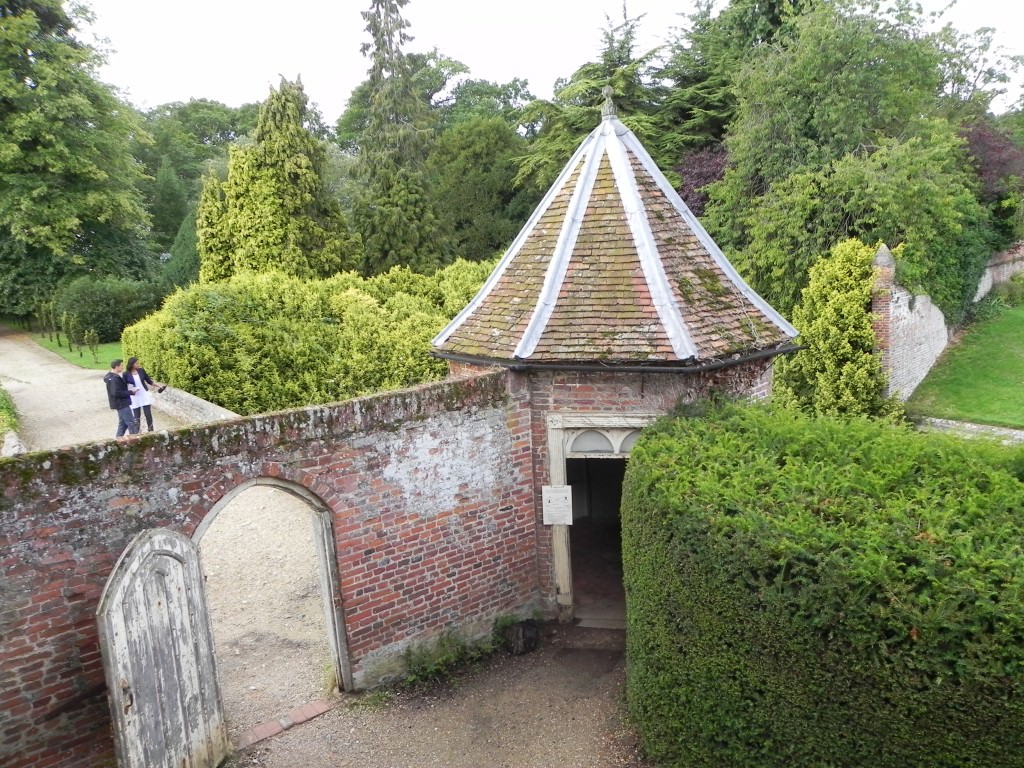 Next, I move on to the tranquil 4-acre gardens, an oasis of peace. They are a remnant of the early settlement on this site, predating Kentwell Hall. Now restored to their original style, the brick-walled gardens feature weathered espaliered fruit trees (dating from the 17th century), and160 culinary and medicinal herbs, roses, flowers and vegetables. 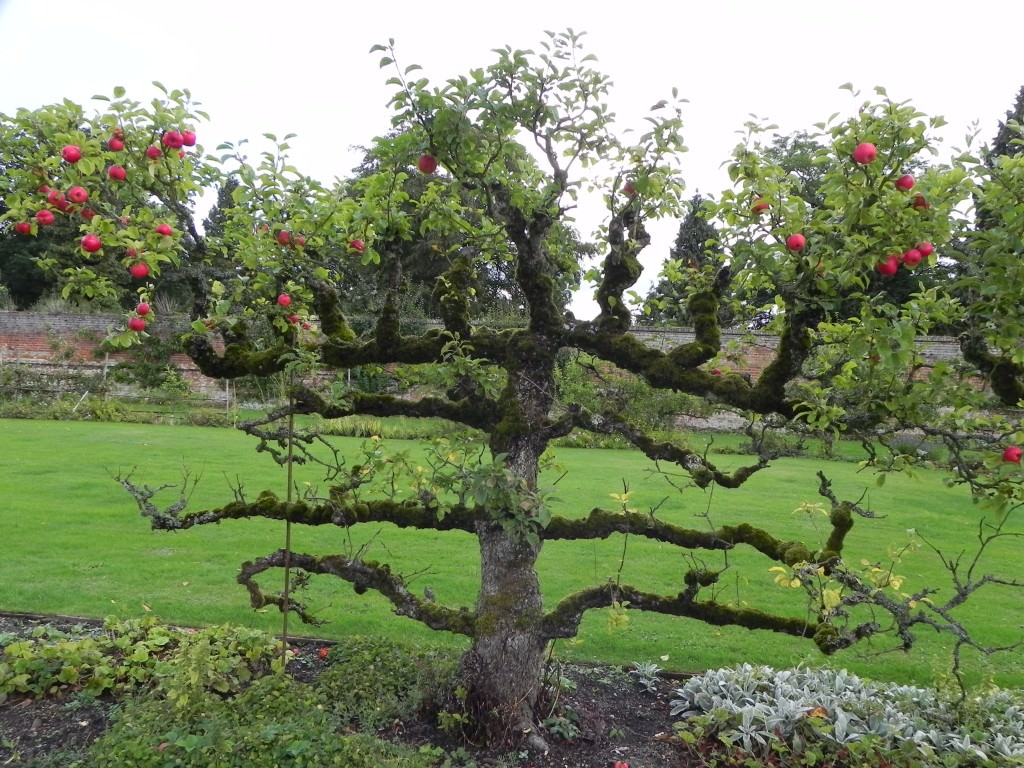 This fruit tree dates back to the 17th century

Returning to the house, I stroll through a charming cultivated forest of gnarled old Walnut, Oak, and Yew trees, offset with bright bunches of daffodils, bluebells, and cowslips. Poised at the edge of the forest is the Dovecote, a large square brick building with hundreds of fluffy white and gray doves cooing and fluttering about their small roosts that are built into the brick walls of this large birdhouse. 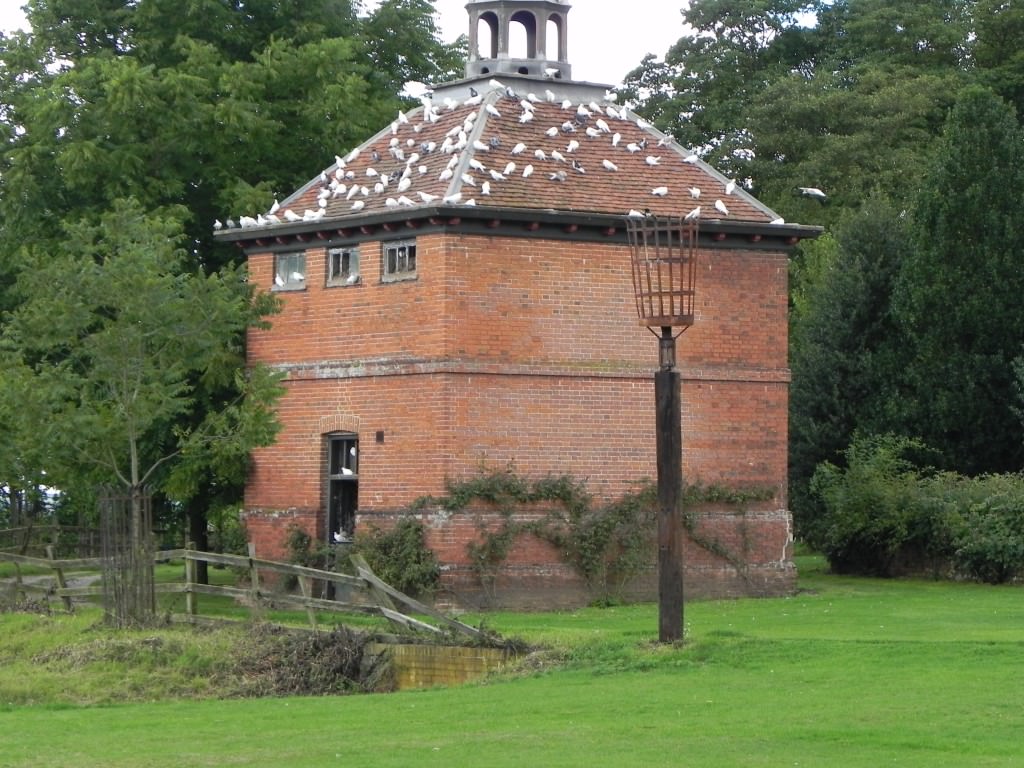 Finally, I walk across to the farm, and here again I’m pleasantly surprised. I walk through a small village with a 1550 AD cottage with braced roof and arched tie beams, an ancient barn, a cow byre, hayloft, and an open thatched hovel that the poorer farm workers would have slept in, along with their animals.

Kentwell Hall is one of England’s finest 16th century houses, and well worth a visit. If you time it right, you’ll see Tudor re-creations of everyday life; people in authentic clothing speaking in Tudor language, and doing 16th Century activities like sewing and cooking.

Do you have peacocks at Kentwell Hall? xxxxxx