After a busy day out on the Kent and East Sussex Railway and a visit to the stunning Bodiam Castle, stomachs were rumbling and we were in need of somewhere for an evening meal. 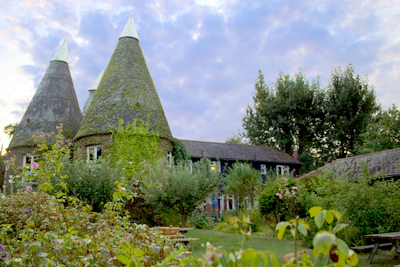 We were heading towards Rye in the South of England and had eager eyes looking out for a pub along the way. With one or two, we drove past too quickly to stop, then one we tried was closed and another had loud music blaring from the bar (and was advertising the more unusual country pub pursuits of ‘tarot reading’ and ‘plate smashing’ – or ‘tarrot reading’ as they’d misspelt it!).

Getting hungrier by the minute, it was a relief to find that the next pub we came across, The Playden Oasts, was open, had gentle background music and was serving evening meals. Even better was that it was rather picturesque too, as it was based in an old oast house (a conical-shaped building where beer used to be brewed – very apt for what is now an inn!).

Our arrival at The Playden Oasts coincided with the busiest time of the evening – several other people had recently arrived, were ordering meals and others were being served – and there weren’t a lot of staff on duty. However, the bar manager/restaurant manager was extremely friendly and helpful, serving drinks and ensuring we had a menu to browse.

There were comfy sofas in the bar, so we sank down into them to peruse the menu choices. It was a Sunday evening, so various traditional Sunday roasts were listed; we didn’t take long to decide on roast pork and apple sauce, and quickly placed our order. 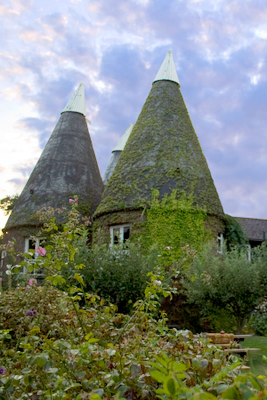 The bar area is traditionally decorated, with hops hanging from the ceiling and acting as a clear reminder of the buildings past and previous life as an oast house. Although they were busy, we didn’t have to wait too long until our meals were served in the Roundel Restaurant. The name gives it away really, but we were sitting in one of the fully rounded parts of the old oast house.

The meal lived up to our expectations and was delicious. The roast pork was cooked to perfection, served with a selection of freshly cooked vegetables, generous sized roast potatoes, apple sauce and lashings of excellent crackling – the essential roast pork accompaniment.

Sometimes we’ve been disappointed with Sunday roasts elsewhere – either as it wasn’t cooked in the way we would have done, the vegetable selections were poor or overcooked, or it arrived soaked with far too much gravy – but there are no complaints with The Playden Oasts roast. It was a lovely meal, in unusual surroundings, and served by staff that seemed only too happy to help.

The desserts all sounded lovely and looked nice as they went past to the table next to us, but we felt sufficiently full after the roast and opted out of a dessert. As far as prices go, we felt it was very reasonable. The total for two roast meals came in at just under £20, so with drinks, the final bill totalled about £25.

For a much-needed meal, when we had no idea where to go, The Playden Oasts was a great find and provided the ideal location for a relaxing meal at the end of a busy day.