Perched high on a hill with the French Alps draped as a fairy tale backdrop, the medieval village of Pérouges persists. A timeless town. A perfectly preserved gothic treasure. It’s like walking through the pages of a story from the Middle Ages when chivalrous knights and fair maidens ruled the day. Even today it remains an iconic enclave hiding behind massive fortress walls built of impenetrable stone. Uneven cobblestone streets wind through the narrow alleys, streets, and byways. Today, the town of Pérouges is not only one of the most beautiful, but also one of the best preserved in France. 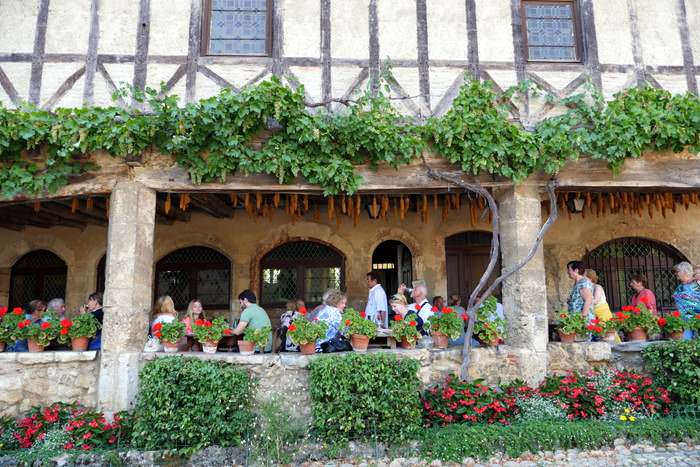 One of several restaurants in Pérouges © Karin Lepari, all rights reserved.

I came to Pérouges by way of an optional tour while onboard Viking’s “France’s Finest” river cruise, a 15-day ultimate journey through France from Paris to Normandy and Burgundy to Provence. However, there are other ways to discover this ancient city. Only 25 miles north east of Lyon, it’s an easy day excursion by train or auto. A friend pointed out to me that the town is easily accessible from Geneva, Switzerland as it’s only a 90- minute drive.

Once there, you can only enter the village through two different entrances, doors that are called “Porte d’en Bas” (bottom door) and “Porte d’en Haut” (upper door). Once through either of these ancient gates, you are magically transported to a time where medieval architecture and towering walls enclosed half-timbered facades and paths built of rounded pebbles and stone. 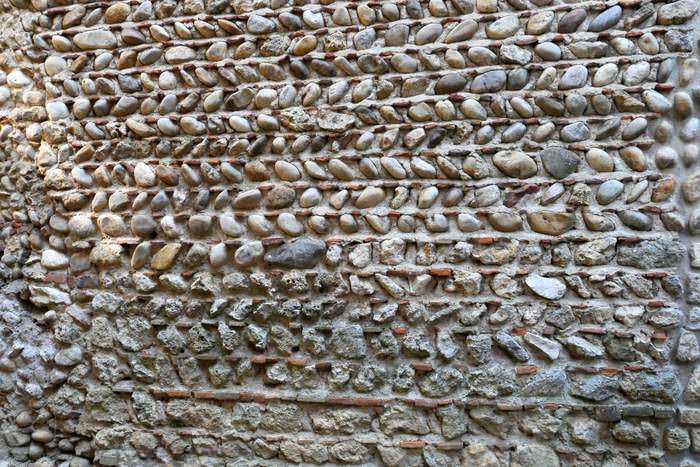 Medieval wall made with pebbles and stones © Karin Leperi, all rights reserved.

Both entrances bring you to the village’s main square – La Place de la Halle. The main square is also the site of a majestic linden tree planted during the French Revolution. The year was 1792. Defiant to the ravages of time, the audacious arbor still stands prominently. Because of this, the plaza is also known as the liberty tree – La Place du Tilleul. Within this same square lies the Hostellerie du Vieux Perouges, one of the oldest inns in France. 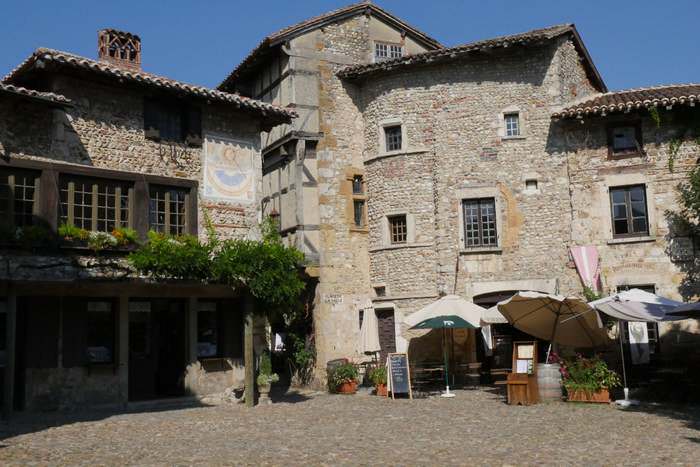 It’s all about the doors

As you traverse the cobbly streets, be sure to notice the difference in windows and houses. Our guide explains that the homes of linen merchants and wine makers were noticeably different in medieval times. It all had to do with functionality since wine-maker’s homes needed lower levels to facilitate storage. Linen-makers wanted natural light streaming through their windows to assist with their delicate weaving so windows were placed higher to catch the sun’s rays. 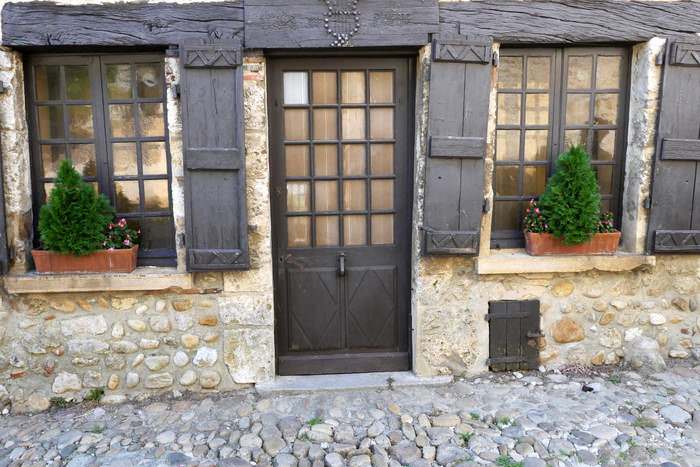 Also, the low door entrances inside the homes, many no taller than 5 feet, look as if built for petite people. This again is a functionality of time in that during the Middle Ages, most people were shorter than they are today owing to nutritionally-challenged diets, disease, and periodic episodes of starvation.

Look around and you will also notice many of the homes have what appears to be old windows and doors that have been sealed over. It’s as if they couldn’t make up their mind whether or not they wanted a window or door. This time the answer lies in the superstitions of the time: departed spirits and ghosts were expected to leave from those exits. They were then sealed so that return access was denied to the unwanted specters. 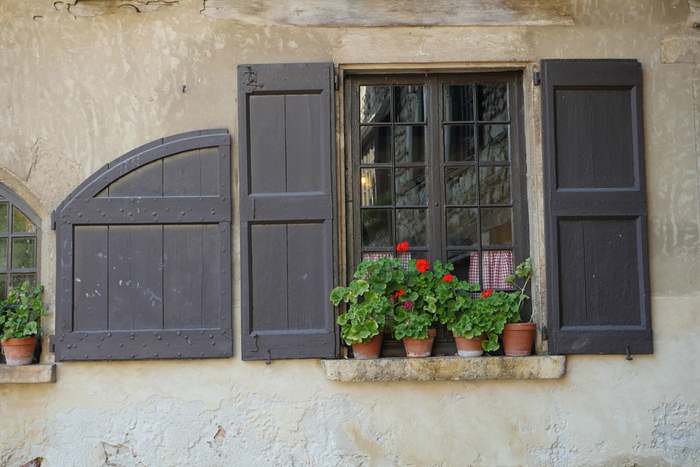 With about 100 inhabitants who call the double-walled village home, Pérouges has several restaurants, gift stores and craft artisan shops, wineries, as well as places to stay that cater to the visitor. From handmade paper and fresh bakery items to wine tastings at Caveau de Saint Vincent, there’s plenty to keep you engaged. However, be forewarned come nightfall as our guide cautioned about the lack of night life within the walls. 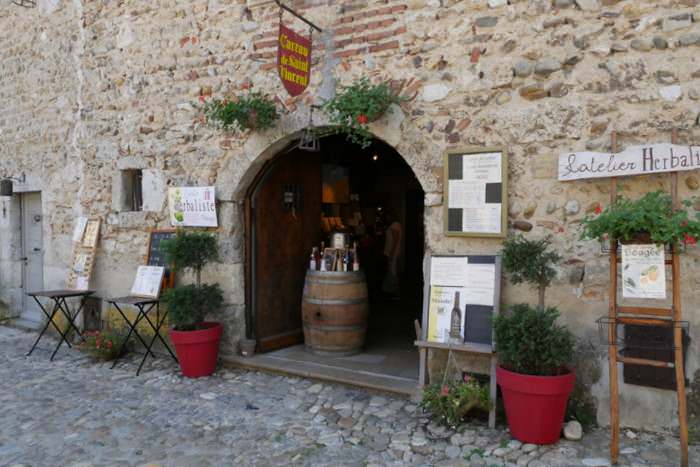 Though stuck in time, the location of photogenic Pérouges has easily been recognized through the years as a set for authentic period films such as: “The Three Musketeers” (1961), “Monsieur Vincent” (1947) and “The Advocate” (1993).

While the past may be a bit muddled, it is thought the town was originally founded in the early 1100’s by a Gallic colony returning from Perugia, Italy resulting in the French name of “Pérouges.” By the late 14th and 15th centuries, the town was transformed into an autonomous city and primarily inhabited by craftsmen, primarily wine-makers, linen weavers, and farmers. In 1601, the town officially became French, ushering in a period of prosperity for the local craftsmen and merchants on the road between Lyon and Geneva. 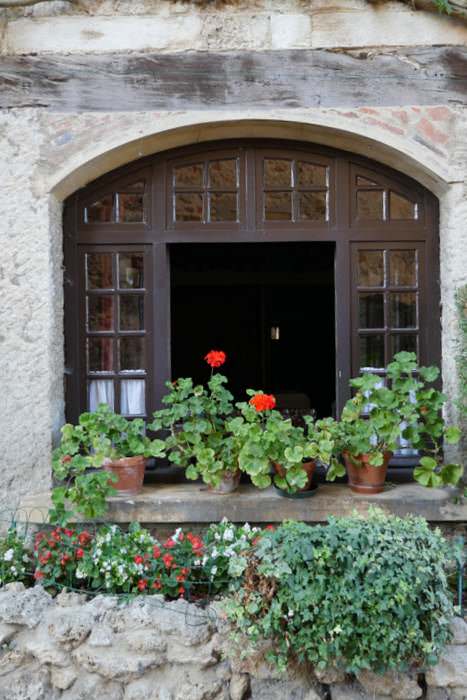 By the end of the 18th century, there were nearly 1,500 residents in town and the specialty was now hemp weave. Unfortunately, the booming textile industry came to an abrupt halt by the early 19th century when railroads and roads bypassed the town, resulting in a precipitous population drop to just 90 people.

The industrial revolution had taken its toll on Pérouges in the early 1900’s, with most inhabitants having left to find jobs in textile factories close to the train. Only one family lived in the once flourishing medieval town. 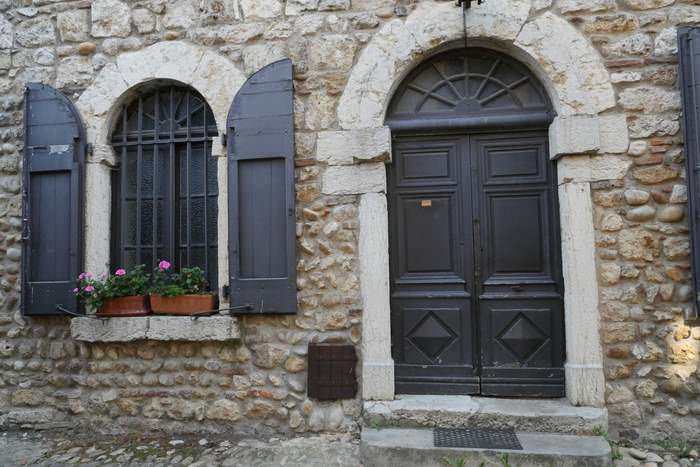 In 1909, the town was sadly slated for demolition. Stalled only by a courageous mayor and eventually preserved by the French government, the town of Pérouges was eventually restored to its medieval glory.

Today, you can still stroll the streets and easily feel transported back in time. Plan on spending the day and tasting Galette de Pérouges at one of the restaurants – a local specialty best described as a warm sugar pizza. And be sure to wear sturdy shoes to negotiate the uneven cobbled streets. 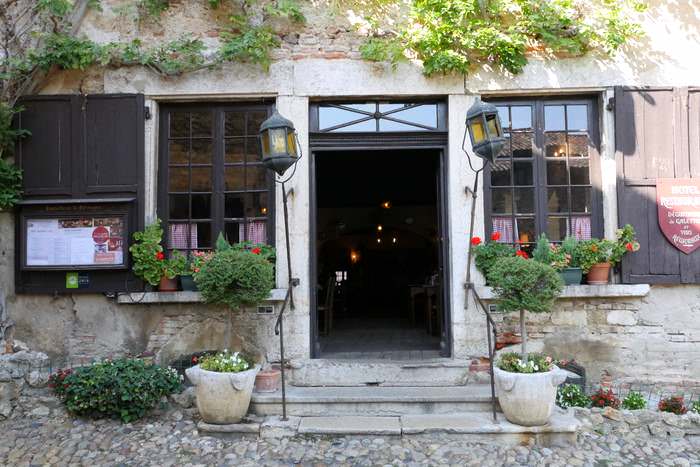 Hotel and restaurant Cafe, a place for galette ©Karin Leperi, all rights reserved.

Written by and photos by Guest Contributor Karin Leperi.

As an award-winning writer and photographer, Karin embraces the natural world but also savors the spirit of people and place. Her specialties range from aviation, culture, cuisine, and cruising to luxury, lifestyle, photography, nature, and wildlife. For more of Leperi’s photography, visit www.travelprism.com

Remember to book some fun activities and tours for your trip to France in advance!

I haven't been here, but it is now on my list. Thanks for the tip!