One Day in Brussels

The “wow” factor is high as you walk through the narrow uneven cobblestone alleys to suddenly emerge on the large square at the Grand Place. It’s the number one sight in Brussels, and one of the finest medieval squares in Europe. The tall Gothic, Renaissance and Baroque facades of the elaborately crafted guild houses tower above you on all four sides of the square. Rebuilt in the 1690’s after French bombardments destroyed most of them, their centerpiece is the 96-meter high octagonal tower of the Hotel de Ville, and the elaborate façade of the Maison du Roi opposite.

<<Where to stay in Brussels>> 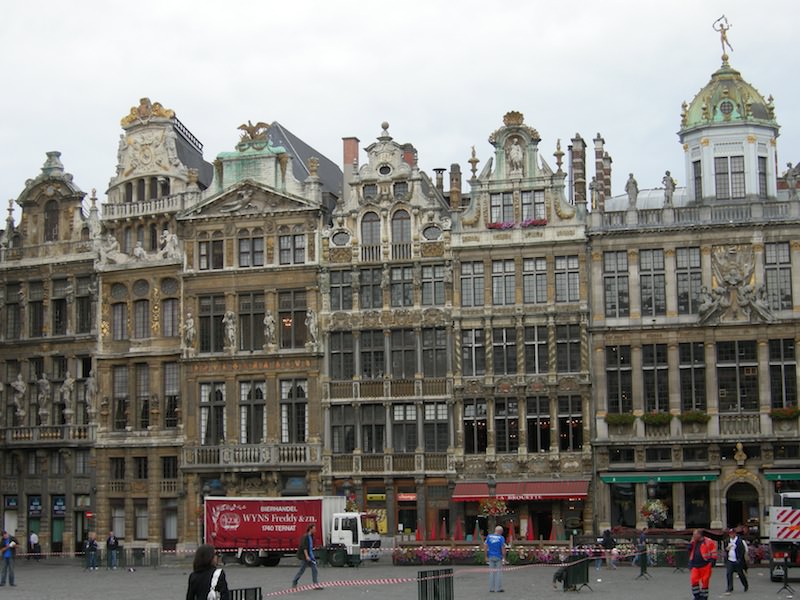 Guild houses in the Grand Place

Nearby are La Bourse, the Belgian stock exchange, and the Manneken Pis, a 2 feet high statue of a little boy peeing. This, if nothing else will give you an idea of the quirky, tongue in cheek Belgian sense of humor, as you watch huge crowds of tourists gather for photos in front of this diminutive icon. There’s even a small museum a few hundred yards up the hill dedicated to the statue’s clothes donated by dignitaries from other countries. The Manneken Pis is only one of many unusual and weird sights in Brussels. 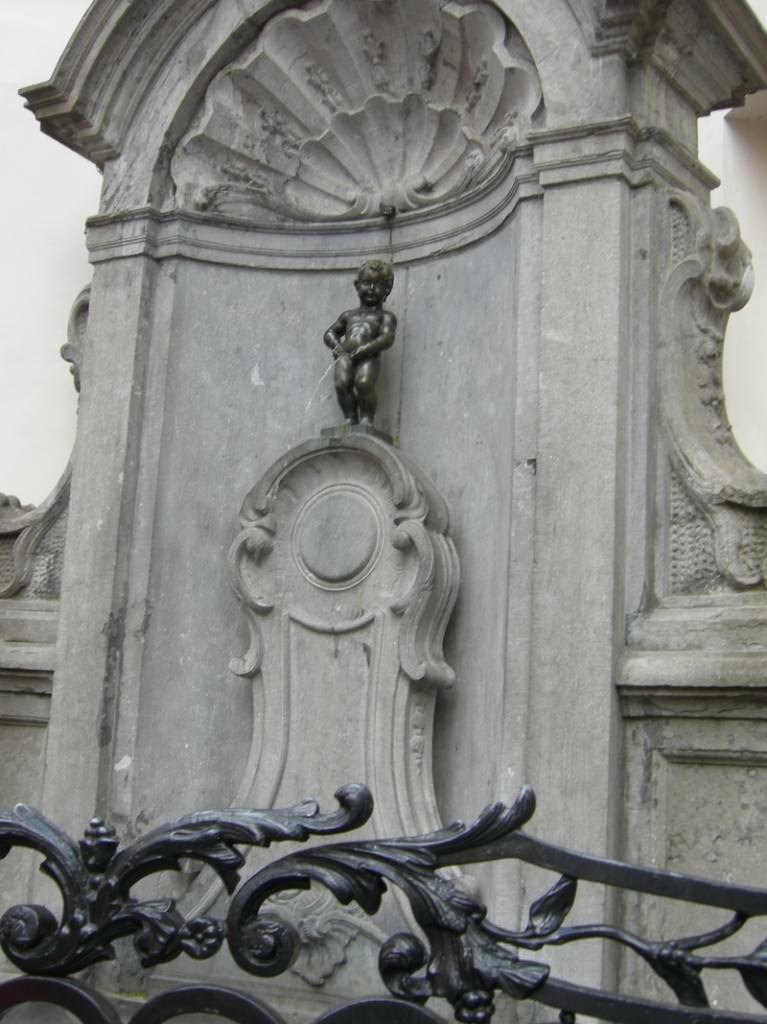 The Manneken Pis, a 2 feet high statue of a little boy peeing.

Backtracking, a few minutes’ walk across the opposite side of the Grand Place gets you to the Galerie St.Hubert, a wide 19th domed glass gallery. The first shopping arcade in Europe, it would not be out of place as a gallery in the Louvre with magnificent Greek and Roman carved stone statues posing and staring down at you. 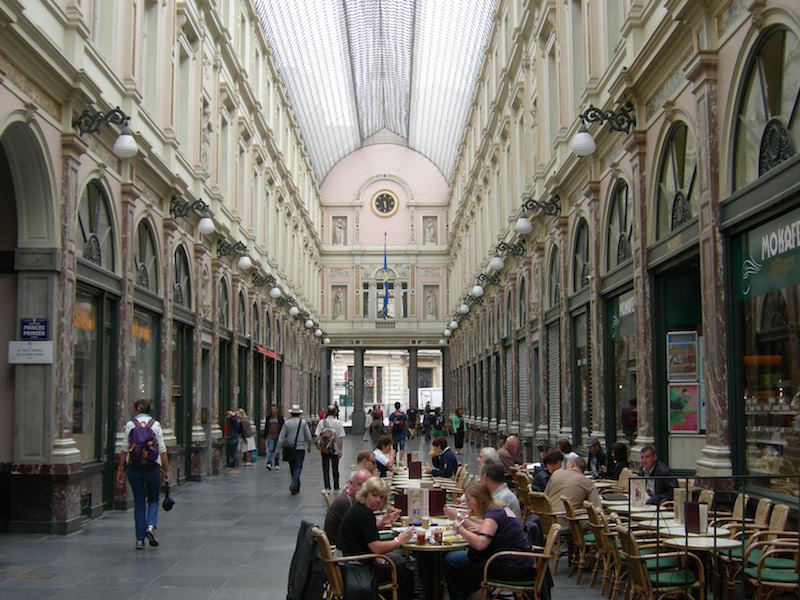 A 5-minute walk further up the hill is the towering Cathedrale St. Michele et St. Gudule, a Gothic and Romanesque Cathedral. It’s designated as the cathedral of the Belgian royal family where they celebrate their weddings, and mourns at royal funerals. Walk down some narrow stairs below the floor level of the cathedral to see the ancient foundations of the original church that stood here over a thousand years before. Beside the nave, look for a painting showing what the cathedral looked like 500 years before, with a religious procession in the foreground.

Continue up Coudenberg Hill another 5 minutes and you are in the Quartier Royal, near the royal palace of the Belgian royal family. They’ve survived many controversies over the past hundred years. One prince likes to race the Eurostar train on the freeway, traveling over 180 mph and a previous king consorted a little too closely with the Nazis in World War Two. The Belgian royal family also encouraged genocidal practices and appalling exploitation of the natives in the Belgian Congo 100 years ago. The Dukes of Brabant and Burgundy also lived in this palace, making it a very historical site. 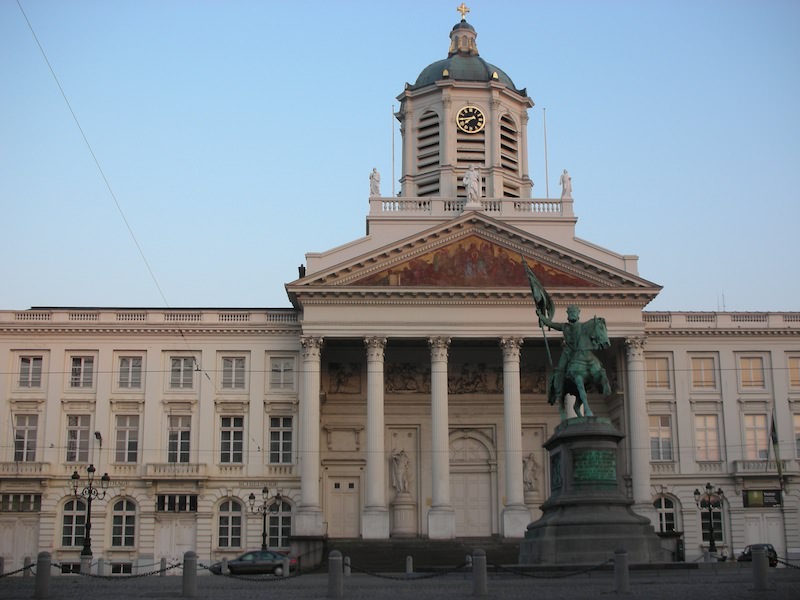 The front of the Royal Palace.

The Palais Royal is open for 6 weeks each year to tourists. Opposite it the Parc de Bruxelles, bisected by long white chalk pathways, lined with ancient trees, statues and fountains makes a great place to rest and watch the Belgians taking their lunch. If the Palace is open do take the self guided tour-you’ll marvel at the opulence and splendor of the high ceilings, gold gilded, plush red and blue wallpaper, ceilings and wall hangings. The Marble Room and Long Gallery are highly decorated rooms where the royal family held state receptions and dinners. 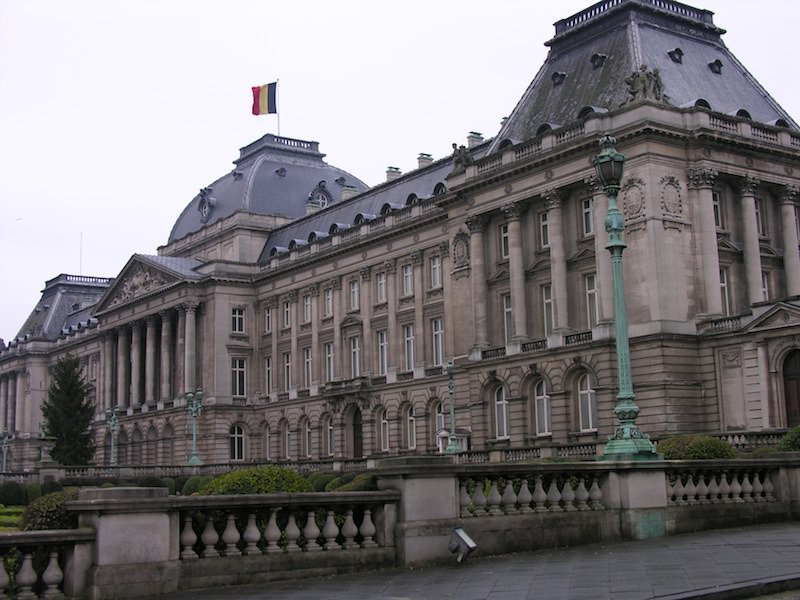 The Palais Royal is open for 6 weeks each year to tourists.

The Palace’s Hall of Mirrors is a unique and a fantastic sight. In 2002, artist Jan Febre decorated the ceiling and a chandelier with 1.4 million jewel beetle wing cases, a gift from the king of Thailand. The beetles are a deep translucent blue green hue, and seem to move if you look at them for a while.

Only 10 minutes away by Metro is the Parc du Cinquantenaire with chalky clay pathways, sculptures, monuments and three excellent museums. Sponsored by the Royal family, the Royal Museum of the Army and Military History, the Royal Museum of Art and History, and Autoworld take up a solid half-day’s sightseeing by themselves. The latter museum for car lovers boasts an eclectic collection of 300 vehicles, many owned and donated by the Royal family. Walk up to the top of the towering Central Archway, an arch loosely based on the Arc de Triomphe in Paris, for a superb view of Brussels. Access is through the Military Museum. Tourists compare this arch favorably with the Arc de Triomphe in Paris.

The Atomium stands at the far end of the Metro line, an enormous, 100-meter high glittering stainless steel and aluminum model of an atom of a metal crystal. It reflects the sun for miles around Brussels. You can take an escalator up into and between its nine spheres, each 60 feet in diameter. It was built for the World Expo in 1958. 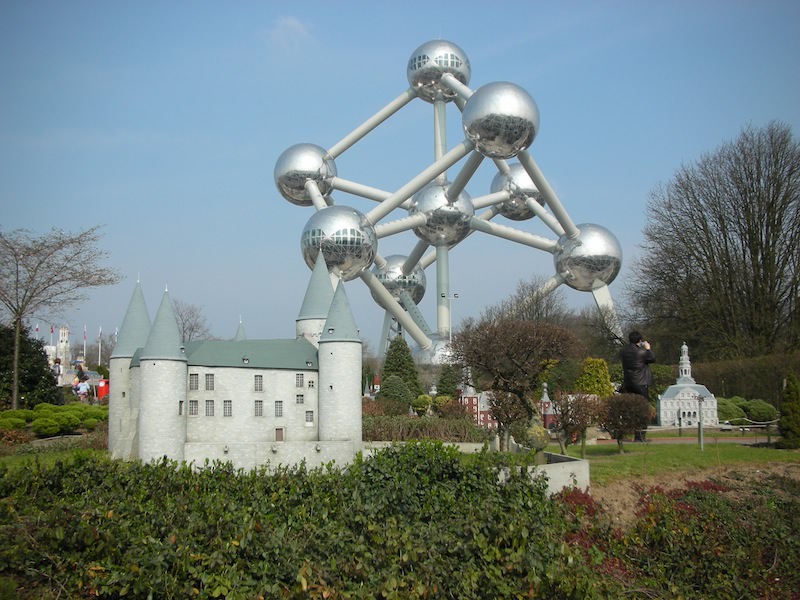 The Atomium, with the miniature Europe castles in foreground

Book your Brussels hotel on the Internet. There are several hotels along Rue Royale, costing between 65 and 100 euros/night, all ideal for using as a base while spending a few days exploring Brussels. Located close to the Botanique Metro underground station, they are only 15 minutes’ walk from the Grand Place and other major tourist attractions. A tramline also runs along Rue Royale. Try the Brussels Royotel (my favorite), at 65euros/night, or Hotel Villa Royale at 100 euros/night. The rooms are clean and small, but the prices are great for their location. Located in a Turkish area, lots of cheap Turkish eateries, small grocery stores and a laundry are within a few minutes’ walk. A 10-minute walk gets you to a number of other upscale downtown restaurants including the Brussels Grill. 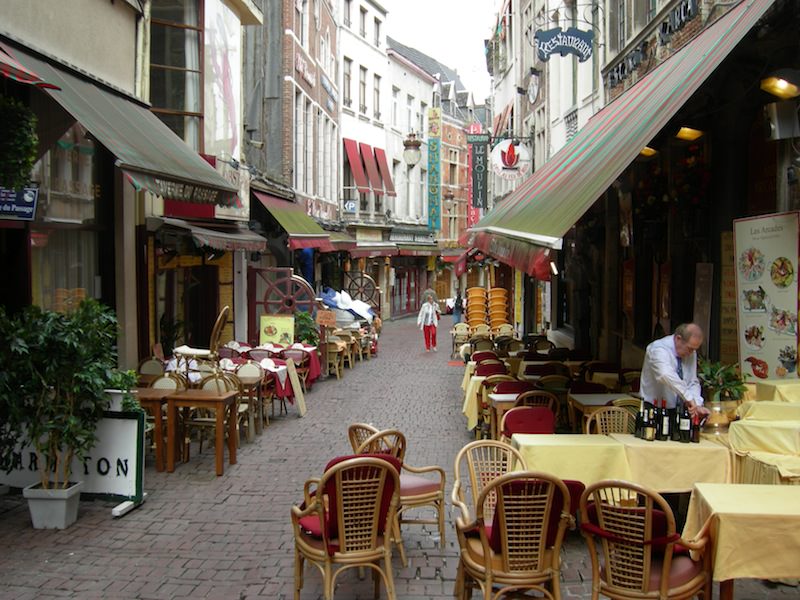 Restaurant row, near the Grand Place is a favorite tourist dining spot with dozens of restaurants lined up along a narrow alley.

To see all the major tourist sights in Brussels you’ll need at least three days. Most of the sights in Brussels are within walking or Metro (underground) distance, so it is not necessary to hire a car. Be sure to do a day trip by train to Bruges, the beautifully preserved medieval town less than an hour North East of Brussels.

[…] around the city, trying to cover everything that Roy at Europe Up Close suggested we could see in one day in Brussels, returning back to the hotel to our room was a delight. To be able to relax in a room where good […]