The road from Athens to the Peloponnese traverses the coastline past factories and shipyards then climbs high above the sea rewarding us with panoramic views of the sparkling blue Saronic Gulf. My friends and I on our way to visit Corinth, the ancient city that was once a strong rival of Athens. As we descend the pass, we reach a low, flat barren track of land known as the Isthmus that connects the Peloponnese with the rest of Greece. In the distance are the pine-covered mountains of the Peloponnese and the odd-shaped craggy rock known as Acrocorinth, once Corinth’s citadel. 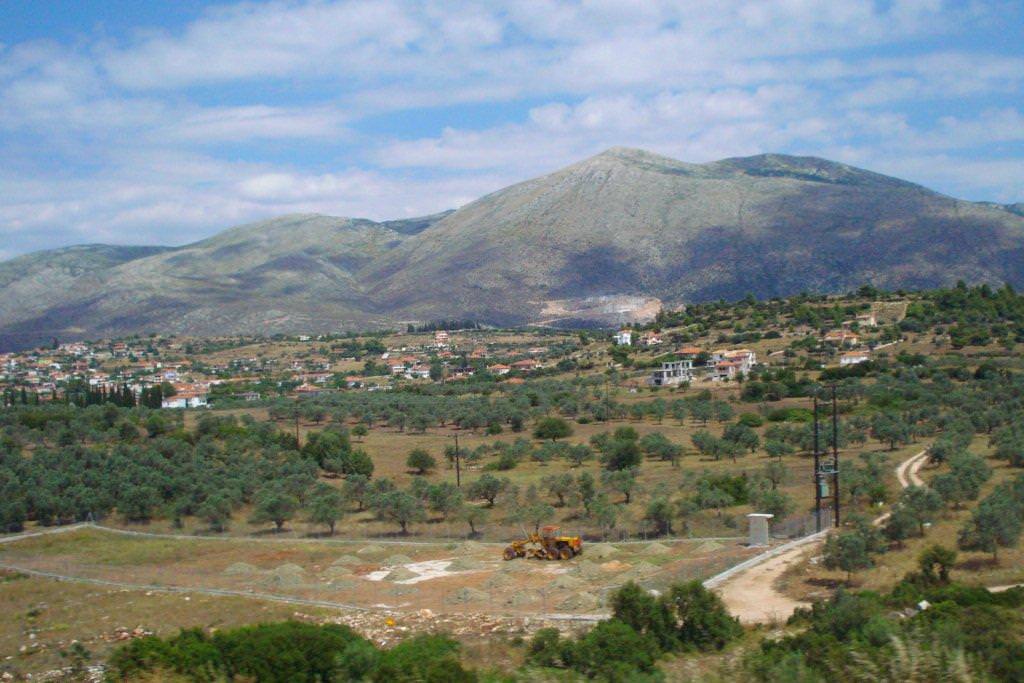 Country scenery on the road to Corinth

Ahead is the bridge that crosses the canal, built in the 1890’s to allow sea-passage between the Aegean Sea and the Gulf of Corinth. We park the car along with the other vehicles and tour buses that line the road at the entrance to the bridge. Cameras in hand, we make our way along with other tourists, to see this man-made marvel.

The canal is an engineering wonder but it is rarely used these days. Still, it’s a worthwhile stop just to view it and marvel at man’s ingenuity. The canal is steeped with history and legend. Rulers from antiquity dreamed of digging through the Isthmus to make a short-cut for their fleets. The first attempt was made back in the 7th century BC but the project was abandoned and instead, a stone carriageway, the Diolkos, was made along which ships could be towed from one side to the other. Remnants of this ancient slip-way still remain at the north west end of the canal by the old Corinthos- Loutraki ferry dock. Boats were relieved of their cargo and strapped on a platform that was dragged from one end of the Isthmus to the other. It was improved in Roman times and was in use up to the 12th century. 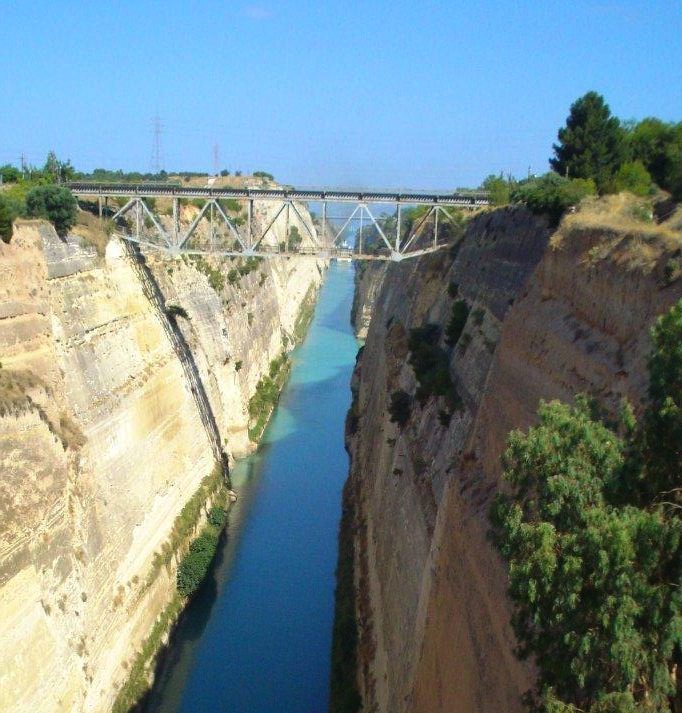 The bridge over the Corinth Canal

As I stand on the bridge looking down into the deep narrow trench that spans the Isthmus, I am filled with wonder especially when I think of all the attempts men had made to complete this astonishing project. During Roman times Julius Caesar considered digging a canal through but was assassinated before he could complete it. Then Caligula commissioned Egyptian experts to try and build a canal but he too, was assassinated. A story is told how in AD 67 the mad Emperor Nero personally broke ground with a golden shovel removing the first pail of soil, only to die shortly afterwards. During Roman times a workforce consisting of 6,000 Jewish prisoners of war were put to work digging wide trenches and drilling shafts into the rock but only managed to dig 700 metres, about a tenth of the total distance across. A few centuries later even the Venetians tried, and failed. It wasn’t until hundreds of years later that the technology existed to enable men to cut across the 6 km Isthmus. Eventually, the canal opened in July 1893, the same time as the Suez Canal. It cuts through the Isthmus at 80 m (262 ft). It is 6.3 km (4miles) long, 23 meters (75 ft) wide and 8 m (26 ft) deep. It can accommodate ships up to 10,000 tons.

I watch a small freighter edging its way through. Not many ships use the canal now other than smaller vessels, and the canal has fallen into disrepair. It’s still a worthwhile place to stop when you’re en route to the Peloponnese and, just as today, there are always groups of tourists standing on the bridge taking photos. 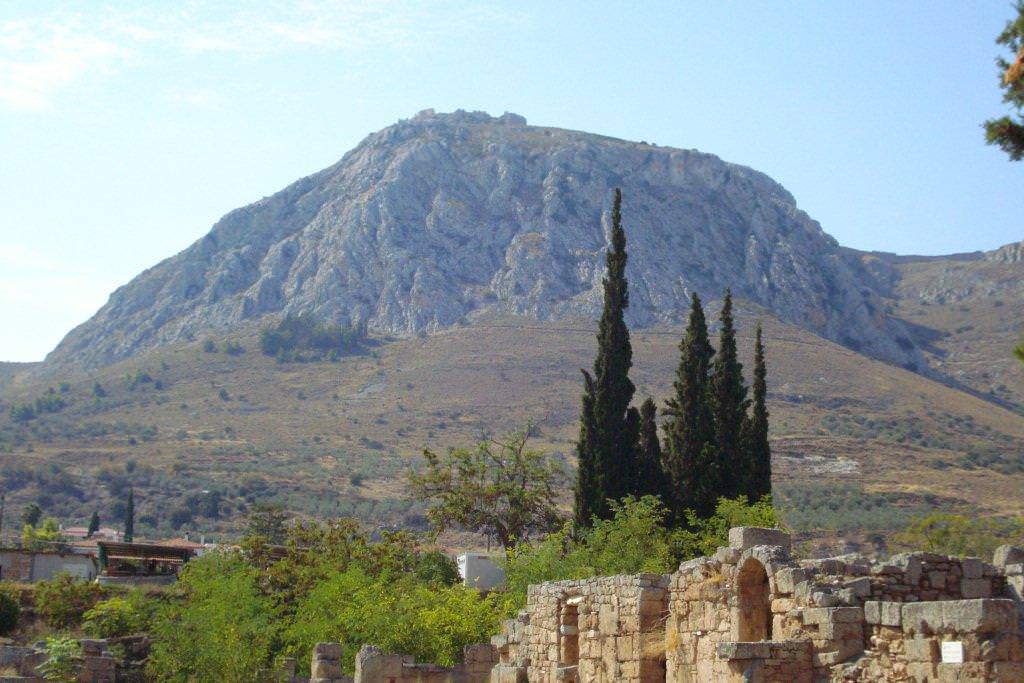 From the canal to the archeological site of Corinth, we drive through farmland with vineyards and olive groves. The city lies on a rocky plateau below the slopes of Acrocorinth . Positioned between two seas, the Aegean and the Gulf of Corinth, made it the centre of commerce and a rival of the great city of Athens. In its most flourishing period it had a population of 300,000 citizens and as many as 460,000 slaves. The Corinthians were known for their worship of Aphrodite and were notorious for their vices. The city had great wealth and the inhabitants had an appetite for earthly pleasures. Corinthian women were said to be the most beautiful and were sought after as heitairai (courtesans). These women were usually educated in music and the arts and were the only women who attended symposiums with the men. Over a thousand sacred prostitutes, served in the Temple of Aphrodite on the acropolis of Corinth.

We enter the site from the north, into the Roman agora, once an enormous marketplace flanked by a stoa. Now there are only ruins but once the stoa was several stories high with shops along the ground floor. Twice in the past Corinth has been devastated by earthquakes as well as plundering armies, so most of what is left is in ruins. There are remains of a basilica and numerous other Roman buildings including the Roman baths. 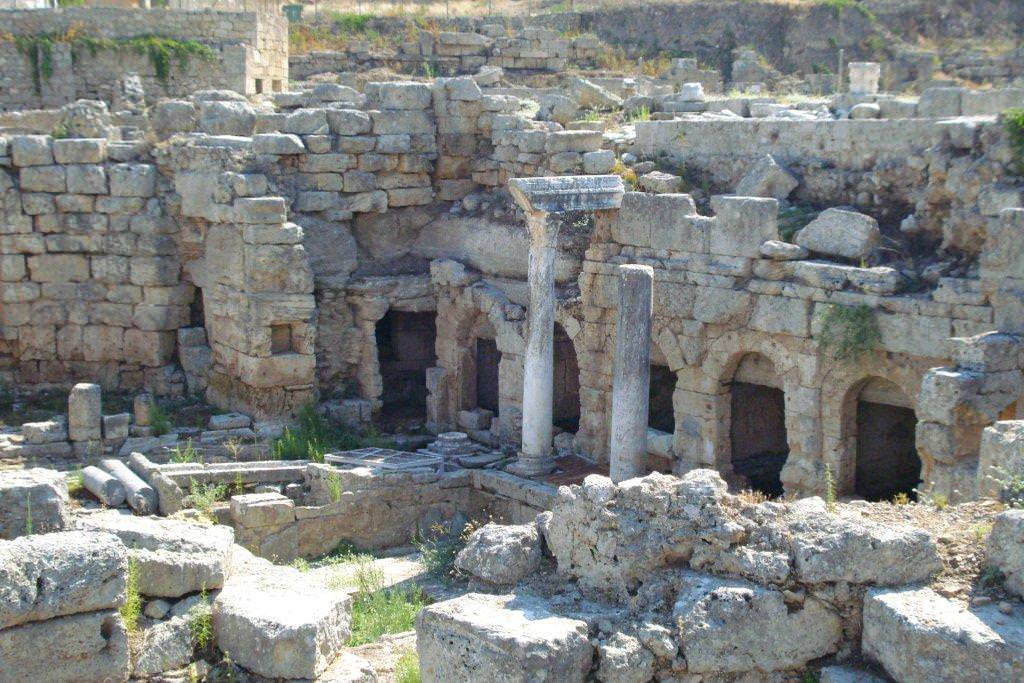 Across from the agora, partially hidden at the base of several steps, is the sacred spring of the Greek city, covered by a grill. The elaborate Roman Fountain of Peirene is off the wide paved street known as the Lachaion Way which was the main approach into the city. There are colonnades and frescoes remaining. Water still flows through this cistern and supplies the site and nearby village. This is one of two natural springs in Corinth. The other is on Acrocorinth.

It’s a long 4 km trek to reach the top of Acrocorinth so in the heat of that July day we opted not to venture there. The massive rock citadel is encircled by a 2 km wall. If you are energetic enough to make the climb you’ll be treated by spectacular views of the Saronic Gulf and the Gulf of Corinth. Among the ruins on the summit are chapels, mosques, houses and battlements dating from ancient Greek to Roman, Byzantine, Venetian and Ottoman Turk. One of the unusual sights there is the Upper Peirene Spring where the water has never dried up. North of this fabled fountain stands the site of the brothel/temple of Aphrodite. The site is open daily from 8 am – 7 pm, winter Tues-Sun 8.30 am – 3 pm. Free entrance. Taxis can be hired to reach there from the city site. 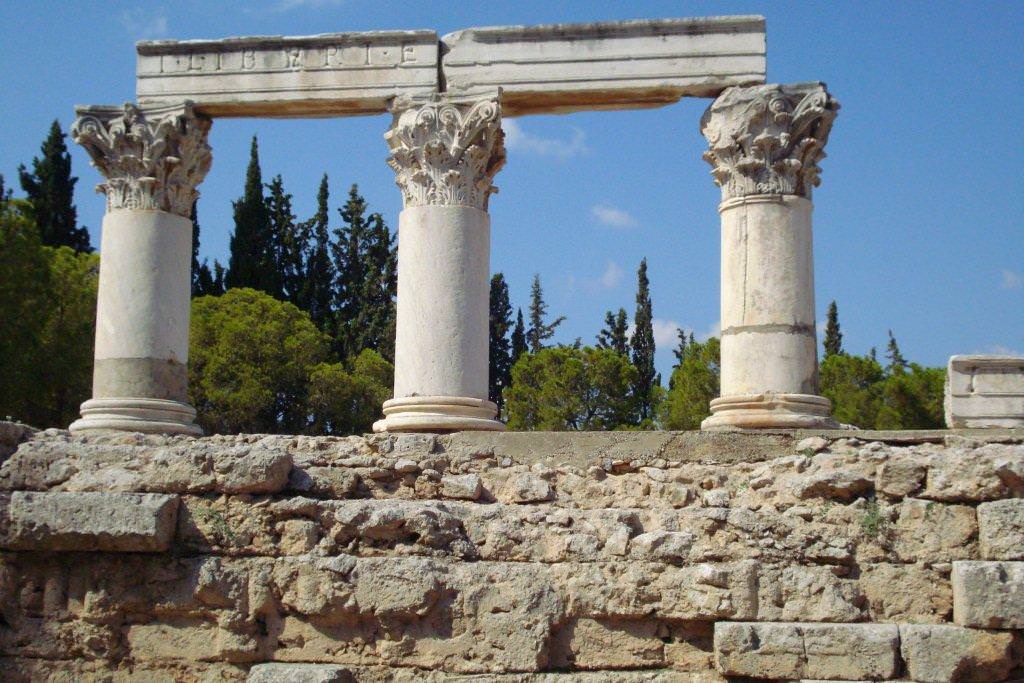 As I walked around the city ruins, I could still see traces of the Corinthian’s wealth. What is left spreads out over a wide area enclosed by sections of the ancient walls. There are several notable remains in the ancient Greek city including a theatre and the Asklepeion, a sanctuary of healing. Of the Classical era, the Temple of Apollo (6th century BC) with its Doric columns is the best preserved. This was the period when the Corinthians dominated and rivalled Athens by siding with the Spartans during the Peloponnesian Wars. Corinth was known for its naval strength and ship building and during the Persian Wars, served as a headquarters for Greece. Several centuries later, after beating the Greeks at the Battle of Chaeronea, the Macedonians built a garrison there and the city flourished under a century of Macedonian rule. 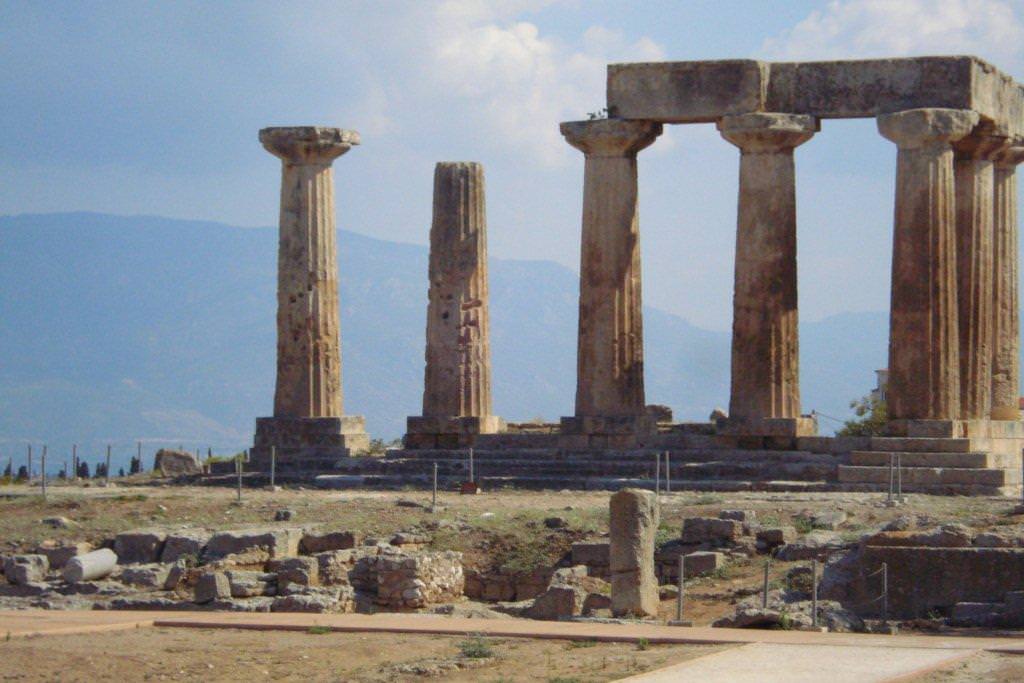 Despite its many upheavals, the city continued to flourish until 146 BC when the Romans arrived and razed the site. Corinth lay in ruins until Julius Caesar had it rebuilt in 44 BC, intending it to be a colony for veterans. Later it became the provincial capital and grew rich from trade. During that time the Apostle Paul came here and was appalled at the debauchery. His First Epistle gives a vivid picture of the troubles he encountered when he founded a church there. I stood on the Bema across from the agora, where Paul was said to have addressed the Corinthians. A group of men clad in long white robes were gathered under a tree nearby performing a ritual ceremony. Undoubtedly it was a religious meeting of some sort. Whether Christian or pagan, it gave the site an atmosphere of the ancient times and for that moment, I was transported back in time. 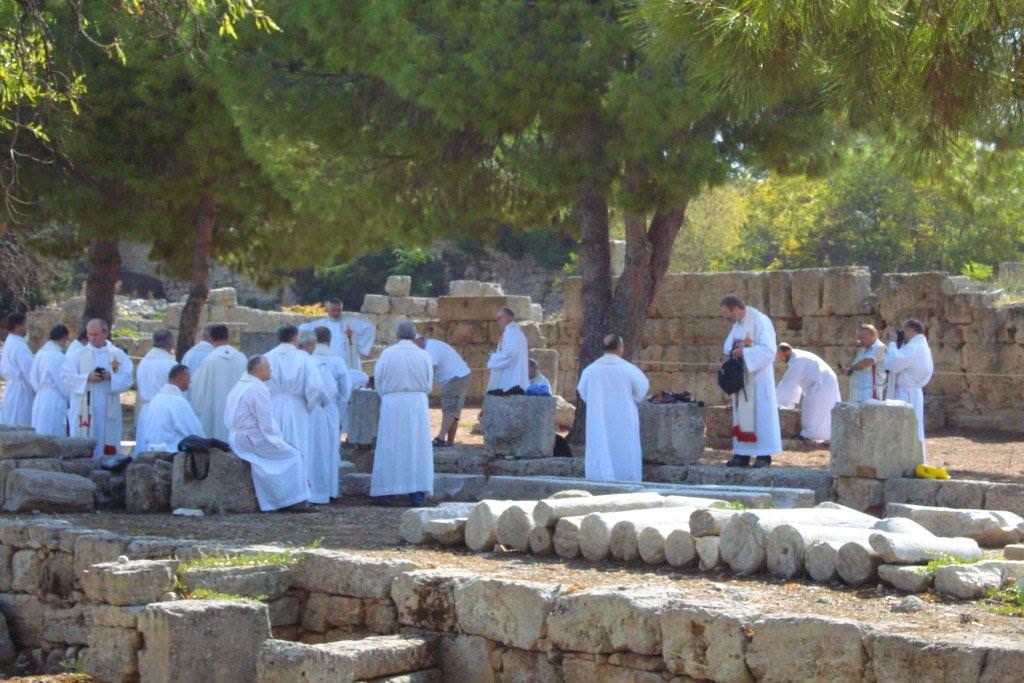 The museum on the site has some beautiful Greek and Roman mosaics including a frieze depicting some of the labours of Hercules. Admission to the site includes the museum. After our tour of the archaeological site, my friends and I were ready for refreshments. The modern city of Corinth (Korinthos) hasn’t much to offer. There is a small village 7 kms from the site, Arhea Korinthos, where there are tavernas and restaurants, but we chose to drive down to the Gulf of Corinth where we had a refreshing swim. 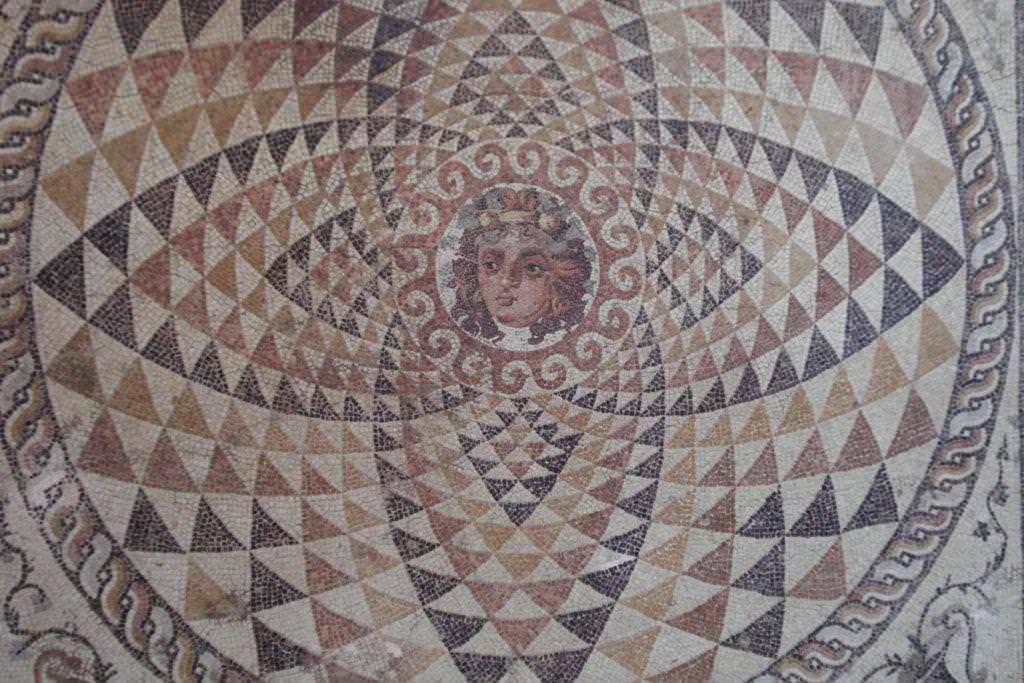 Later, at a beach-side taverna, I enjoyed one of the best arrays of seafood I’ve ever tasted: oktopodi (marinated octopus), kalamaraki (tender, succulent squid), filleted sardines and two other types of small fishes (maridakias and garides) cooked whole, plus a plate of fresh horta (greens) and deep fried zucchini balls, all washed down by several jugs of white wine.

In all, it was a remarkable day, one that will forever stay in my memory.

Fascinating story; I didn't know that history.(Would have liked a map included so I can see where we are.)