I have two confessions to make: a) I have a sweet tooth, and b) I skipped Knossos in favour of indulging my sweet tooth passion in Krousonas. I guess sometimes you just have to get your priorities right. My time on the Greek island of Crete was limited and I reasoned that Knossos has been around for a long, long time and is bound to keep standing, whereas I couldn’t pass up the invitation 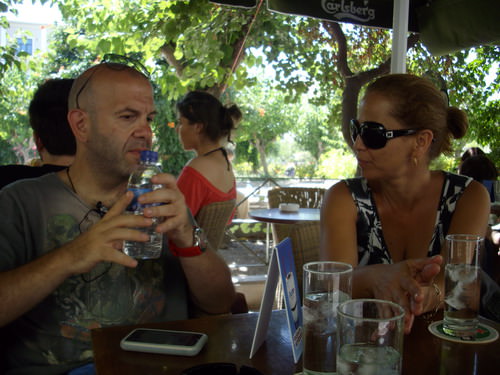 of my friend Philip Exadactylos, owner of the company Eat Crete, to accompany him to the tiny mountain village of Krousonas. Here we would visit one of the many women owned food cooperatives in the area where women actually make the food he sells while following traditional recipes and using only the best, most fresh, organic products. I certainly wanted a glimpse behind the scenes to meet the ladies who had initiated this way of making a living while promoting incredible food to the rest of the world. 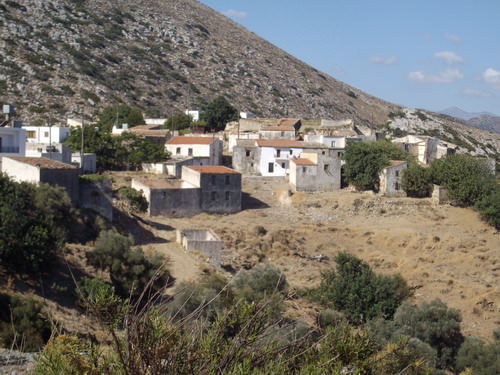 Off we went from Heraklion, the capital, a few miles along the motorway, climbing higher and higher into the mountains where we met a side road with so many twists and turns I sometimes lost my sense of direction. Everywhere I looked there were thousands and thousands of olive trees covering virtually every inch of fertile ground. Interspersed among the olive groves were wayward vines and some pasture where sheep and goats grazed.

Philip had turned off the air conditioning to save petrol because, we had caught one of those days in Greece where lorry drivers were on strike. In a domino effect, nearly all petrol stations had run out of fuel and were closed, so he had to save every drop to get us to Krousonas and back. With all the windows open, what wafted in were not exhaust fumes but the unmistakable scent of wild herbs and flowers which grew by the way side. 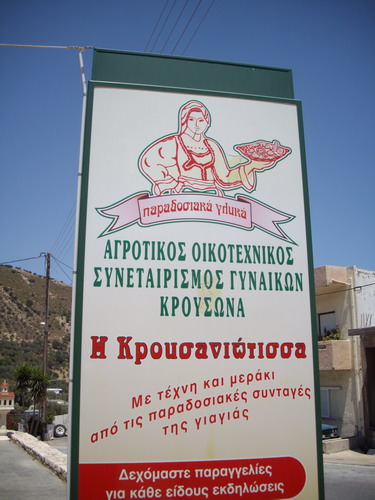 “You know, “ he said, “this island is home to about 25 million olive trees and the consumption of olive oil per head is about 25 litres a year”. Small wonder everything was so green and the people of Crete are so healthy and enjoy a long life. Ask any true Cretan and they will tell you, “Olive oil and a good swig of raki are the secrets to our healthy hearts.” To be honest, I think that more than just a swig of the latter could also have something to do with the many, many fatal road traffic accidents which are marked by shrines along every road, but that’s another story.

Another twist in the road and we were greeted by the majestic Mount Ida, Crete’s highest elevation. According to Greek mythology, Zeus was raised in a cave on Mount Ida and as the Greek gods were fond of food and wine it does not come as a surprise that Crete plays  such an outstanding role in that department. Blessed with good soil, plenty of water and an ideal climate, you only need to throw a few seeds around and something yummy will grow. 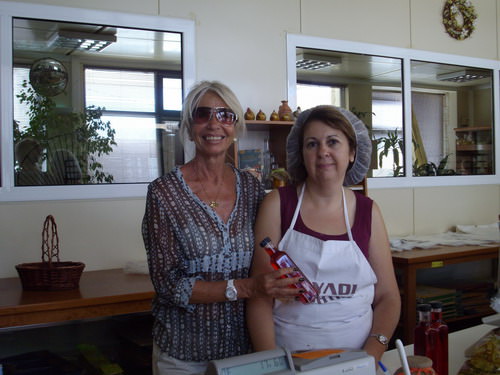 With one eye on the petrol gauge and the other on the road, we made it to Krousanos safely. We entered the shop to be immediately enveloped by delicious smells of freshly baked bread, rolls and pastries as well as the welcoming arm of Maria, the ‘front-lady’ of the co-op who was only too happy to spoil me with samples of her products.

I made a bee-line for honey covered rusks and tiny pieces of chocolate cake, but it’s not all sweets at Maria’s co-op. They offer home made pasta, bags of 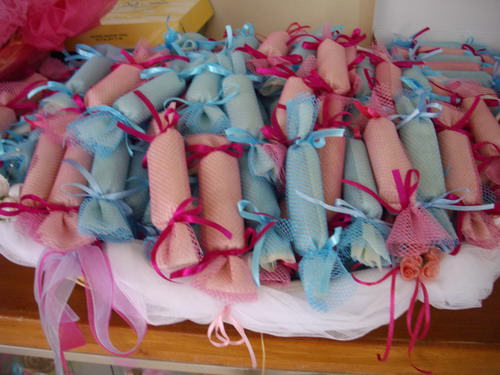 herbs, rolls and little biscuits with raisins, too. My eye fell on a huge basket, adorned with a bow and filled with pink and blue wrapped parcels. We learned that these were traditional wedding gifts, the parcels containing almonds and chocolate pralines. And then there were rows upon rows of olive oil, stone milled and cold pressed as well as wine and the famous Greek ‘raki’ a very, very potent digestive which is best consumed with utter care.

Of course, as Philip is a buyer, everything needed to be sampled and I gladly offered my assistance. Whilst I could still move and breathe, I asked if I could see where the women actually made all these fabulous things and was happily led into the kitchens behind the store. Busy hands formed dough into fancy shapes and more busy hands pushed them into the ovens. They then piled the finished products into gold-foil covered boxes and more samples were proffered for tasting.

Philip, a native of Crete with a multi-national family background, had explained the hospitality of Crete to me earlier, especially hospitality found the further you go inland. Food plays a vital part, and in rural areas, serious offense will be taken by your hosts if you refuse their generous offerings. Bearing that good advice in mind, I gobbled up every morsel offered and in the end was given a bottle of cinnamon essence, another specialty I had never seen before. Mixed with cold water and ice, it’s a refreshing drink in the summer and with hot water in winter it warms body and soul.

These cooperatives can be found in many places on the island of Crete. They are open and accessible to everybody, not just people like Philip who distribute their products locally or on the internet. And everybody is welcome to look behind the scenes, too. Just ask nicely, come with an empty stomach, and don’t refuse any sample that is offered to you.