The first competition held at Olympia, Greece was nothing to do with going for the gold. In fact, it was a chariot race that would determine who would win the hand of a beautiful princess, and inherit her father’s kingdom. 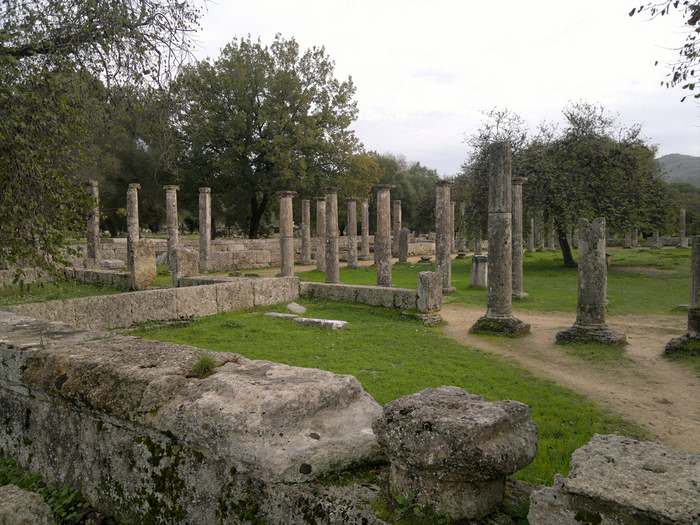 King Oionomaos of Elis, had a daughter who he loved very much, so he challenged each of her suitors to a chariot race. Thirteen of them died before a man named Pelops came along and took up the challenge. Pelops bribed the king’s charioteer to put wax in the wheel casing of the king’s chariot. In the race, Oionomaos was killed, and Pelops inherited his princess-bride and the kingdom.

Pelops gave his name to the Peloponnese area of Greece where Olympia is located. The first historically recorded Games began in 776 BC and were funeral celebrations in honor of Pelops who had succeeded King Oionomaos of Elis after the victorious chariot race. 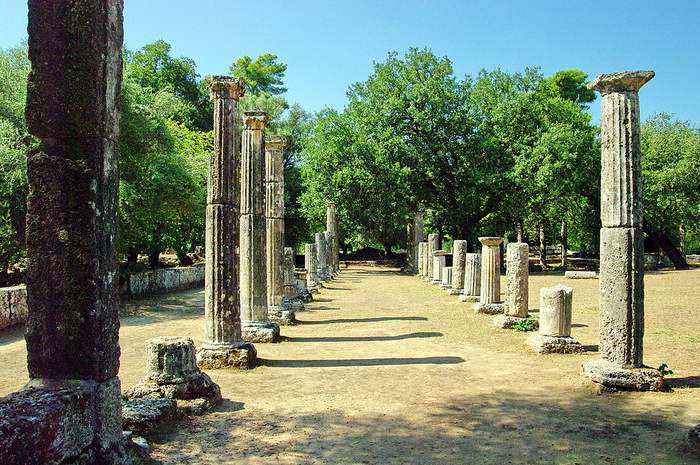 The Palaestra, exercise area for the Olympics competitors

This year, the Olympic Games are being held in Rio de Janiero, Brazil.  As in the past, athletes from all over the world will compete for the gold medals. The Olympic torch was lit at the Temple of Hera in Olympia Greece on April 21 and passed over to the Brazilians for the traditional torch run. But this year’s Games are not without some controversy. Besides the zika virus scare, there is the question of Brazil’s poverty, the country’s political and economic instability, concern for security, the dangers that face visitors in a place where robberies and violence abound and the pollution of the water where some sports will be held. It is questionable whether the Games will prove successful or not. There have been many scandals involving athletes who have been caught taking steroids and other strength enhancing drugs. And there is dissension between some of the countries participating along with the threat of terrorist activity. It seems that over the years the Olympic Games have lost most of what they were first intended to be.

Even as it did in ancient times, Olympia makes an impact on the visitor. As you walk through the lush, tree-lined grove, you can almost imagine seeing the glistening naked bodies of young athletes exercising in the palaestra, the grand processionals making their way to the stadium, the voices cheering as the races were run. This sacred grove, known as the Altis, is associated with cult of Hera, the Earth Mother. Today, the grove, located at the foot of the pine wooded Mt. Kronos in an area of gentle hills, is again planted with cypress and olive trees. If you sit alone for awhile under the trees you will realize what the Olympic Games signified. 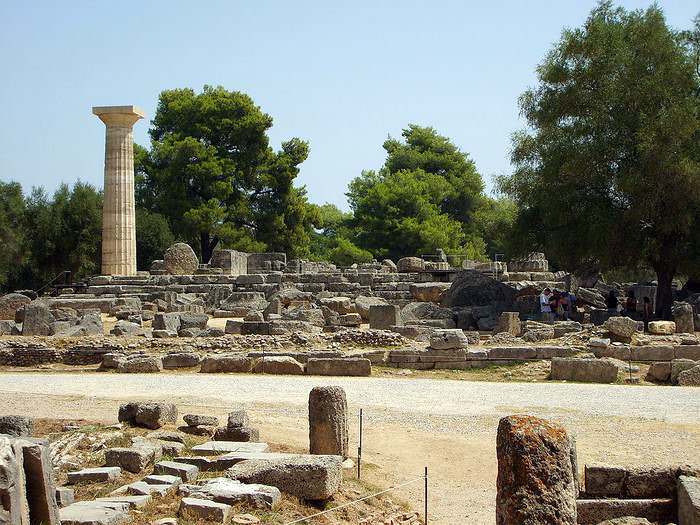 Temple of Zeus at Olympia

There is still something majestic about the ruined temples and buildings that stand in the sacred grove. The most outstanding is the Temple of Zeus, once enhanced by a magnificent ivory and gold statue of Zeus, considered to be one of the seven wonders of the ancient world, a masterpiece of the sculptor Phidias. His workshop was located nearby where later a Byzantine church was built. The Temple must have been immense. Its huge pillars lie like tumbled dominos in the grass, thick as the height of a man. Nearby, the sturdy buff-coloured Doric pillars of the Temple of Hera still stand in splendour amid the oleanders. It was here that Praxiteles’ beautiful rendition of Hermes was found, now on display in the museum, as well as the statue of Victory (Nike) by Paeonios.

King Philip of Macedon erected the impressive Philippeion here after his victory at the battle of Chaeronea in the 4th century BC. It once contained life-size statues of his family, including his illustrious son, Alexander the Great. The site also has the remains of many elaborate treasuries, residences and baths for guests and officials. 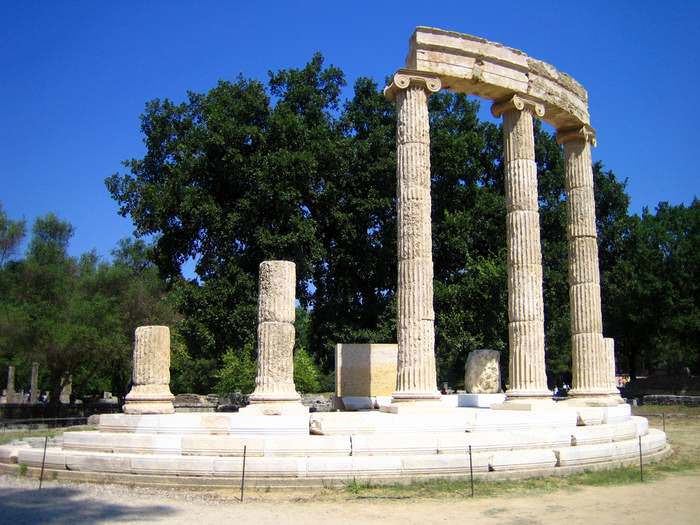 The Philiipeaon, a temple dedicated by Philip II of Macedonia and his son Alexander the Great

Included in the archaeological finds from this period is a column from the palace of Oinomaos. A grave mound identified as Pelops’ was still in existence in the 2nd century AD. In the museum, there are exhibits of sculptures, pediments, sporting equipment and votive offerings. One outstanding pediment shows the celebrated chariot race between Pelops and Oinomaos.

The Games were held every four years in July or August according to the full moon. It was customary to call a truce between warring city-states when the summer games were held. All feuds and differences among the Greek city-states ceased so the young men could leave to participate in or attend the games.

From 776 BC lists of the winners were kept engraved on stele at the stadium, and thus began the method of Greek chronological reckoning by Olympiads. Later, other sports were added such as the two-stade (stadium) race, the long-distance race and the pentathion. In the 7th century, boxing, chariot racing and the pankration were included and in the 6th century, a race with weapons. The winners received a branch of the sacred olive tree, but were also rewarded by their home cities. The Games were just for men. Only one woman was allowed to attend the events in the Stadium. She was the priestess of Demeter who sat on her dais by the shrine opposite the tribunal of judges. 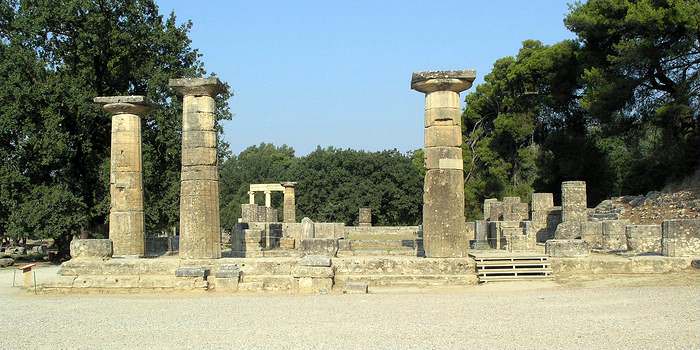 The Temple of Hera for the priestess of Hera, the only woman alllowed to attend the Games

The Greeks believed it was Herakles who laid down the regulations for the games and specified the length of the stadium (stadion). The stadium, which seated 30,000 people, had no seats. Spectators sat on the grassy slopes around the 183-meter oval. The athletes sole aim was to win an olive crown and the praise of their fellow man. Today, it’s fun to stand at the starting line and dash to the finish. On a hot day, shed a few clothes or, if you’re really brave, run naked like the athletes of old did. 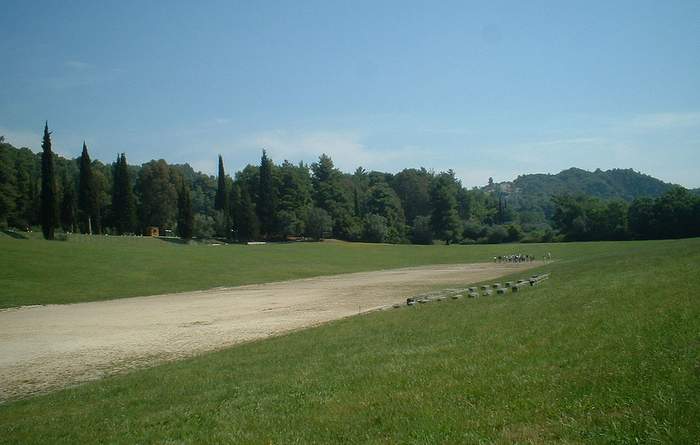 The Stadium (Stadio) where they ran naked for the olive crown.

The site was excavated from 1875 by German archaeologists. A direct consequence of these excavations, was the revival in 1896 of the Olympic Games, by Baron Pierre de Coubertin. His heart is buried at Olympia in a cairn commemorating him. The first revived Games were held in Athens in 1896 at a stadium built on the site of the stadium of antiquity.

The Museum of the Olympic Games in the town of Olympia exhibits materials and literature about the Games since 1906, and a collection of Olympic stamps. There is also an interesting display of athletic equipment from ancient times including stones used for weight lifting, stragiles (for scraping oil off the athlete’s body), discus and student’s supplies. The International Olympic Academy is located close to the archaeological site, near the memorial for Baron de Coubertin. 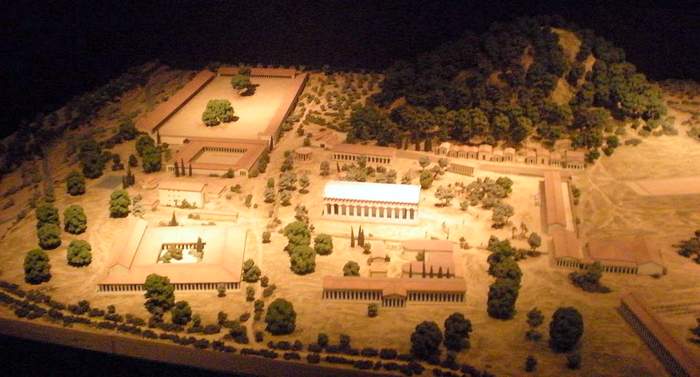 It’s easy to get caught up in the media-hype and frenzy that the Olympic Games create. This year because of the controversy there is some talk that perhaps the Games should be permanently moved back to Greece. Whether or not that will ever happen, one thing for certain is that when you visit Olympia, you are made aware of the ideals that created the first Games. It wasn’t just about who won the gold, but more importantly the Greeks made peace so their athletes could compete with honor.

As you wander the site and remember how the Games began, Olympia speaks to you and transports you back into the past. It was a time of harmony between the warring city states, something that in these tumultuous days the world, and those countries who who participate, should strive to emulate.

The site can be reached by train and bus from Athens via Pirgos.
There are accommodation in hotels and pensions in Olympia and a campsite at Kyllini on the Ionic Coast. There is also a Youth Hostel and two campsites near the town.
The Museum is open 8 am – 7 pm Tuesday – Sunday, noon – 7 pm Monday. Э 3.55
The site of Ancient Olympia is open 8 am – 7 pm, Э 3.55  Free on Sunday and public holidays.
The Historical Museum of the Olympic Games (two blocks west of Praxitelous Kndyli) is open 8.30 am – 3.30 pm Monday – Saturday, 9 am – 4 pm, Sun. Admission Э 1.50

Thanks again for your posts.

I have been to Olympia on a trip to Greece and really liked the place, the idea I was standing in the same area that Alexander the Great was standing was really cool. Not to mention the site of the first Olympics, I would have run around the field naked like they did in a heart beat if they would have let me. Also seeing the one building where the earthquake tumbled the columns in rows was very interesting as well.

Thanks. I'll be there myself Sept/Oct doing some research on the Greek islands. You might be interested in my ebook on Kindle ATHENS AND BEYOND

Great post! I'm going to Athens in October, I'll have to make the trip. Bookmarking for future reference. Thanks!